The Games and Characters of the Senran Kagura Franchise

Senran Kagura is a video game series turned anime/manga filled with hot ninjas, comical moments and lots of action! The franchise has released tons of different games over the years. Keep reading to learn more about the hottest! 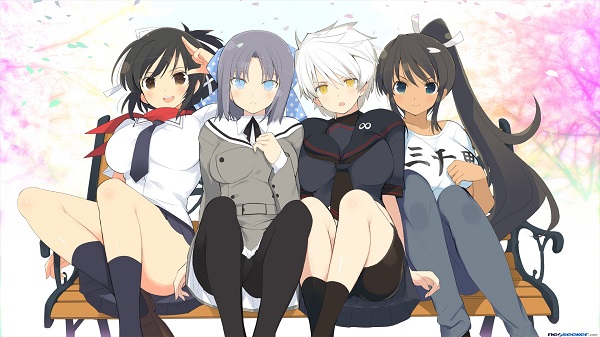 From left to right: Yagyuu, Hibari, Asuka, Ikaruga, and Katsuragi.

From left to right: Homura, Hikage, Mirai, Yomi, and Haruka.

From left to right: Imu, Murasaki, Miyabi, Ryona, and Ryobi.

From left to right: Minori, Yozakura, Yumi, Murakumo, and Shiki.

Senran Kagura Burst (2012) is a side-scrolling beat ‘em up game filled with over-the-top characters, Ecchi comedy, a leveling system, and a big set of fighting skills. The roast of playable characters includes the girls from the Hanzo Academy and the Crimson Squad.

Senran Kagura: Shinovi Versus (2013) follows the rivalry developed in the previous game and adds another faction to the brawl―the Gessen Girl’s Academy. This release lets you play as any of the four ninja clans, allowing you to experience the game from four different story perspectives.

Senran Kagura: Estival Versus for PS4 and PS Vita

Senran Kagura: Estival Versus (2015) is the latest game released by the Senran Kagura franchise. For this game, the girls from the four ninja clans are transported to a parallel dimension, where they have to face each other again. Apart from the usual cast and the traditional gameplay, this game adds new ninjas with a whole set of new abilities and techniques into the equation, as well as a wider range of options for character customization and better graphics.

The Senran Kagura video games don’t have a very deep or intriguing story. However, if you’re looking for a game with awesome gameplay as well as a ton of funny scenes, then this series is the perfect choice!