What is RPG anime? 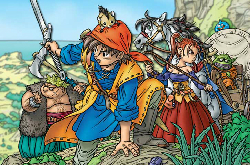 There are two basic type of RPG animes: Those that are based on an RPG, and those in which the characters find themselves stuck inside a world which mimics one. Whether you’re more a fan of the former or the latter, the undeniable truth is that this genre is expanding faster than an inventory limit in a dungeon.

Here, we take a bit of a chronological look at some of the most popular and genre-defining examples of RPG anime, stretching all the way back to 1990. 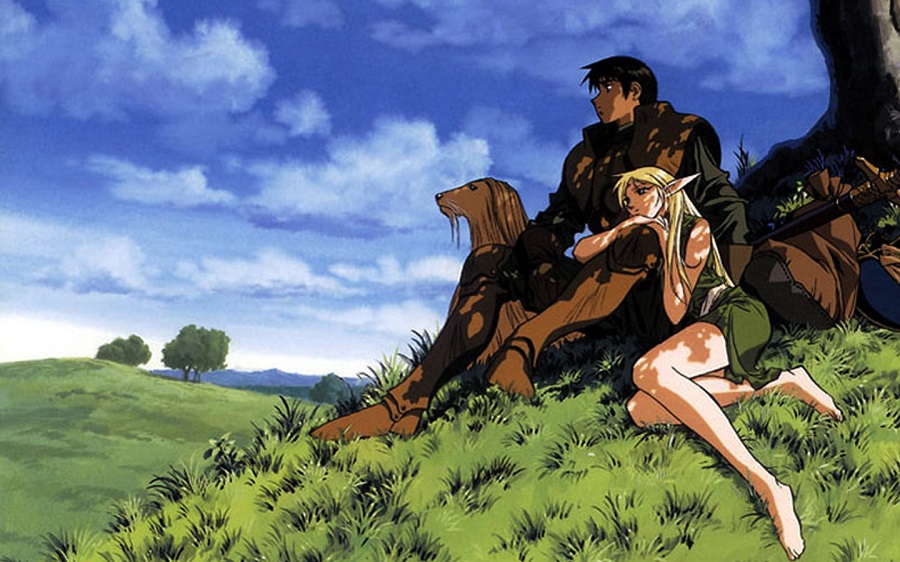 Lodoss-tou Senki may not throw characters into a fantasy world of swords and magic from our real world, but it does possess an archetypal RPG structure that is hard to deny. The characters have all of the typical character roles you would find in a standard RPG for the time period. The enemies are stereotypical of an RPG as well. While the anime might not bill itself as one, it’s certainly not fooling us. 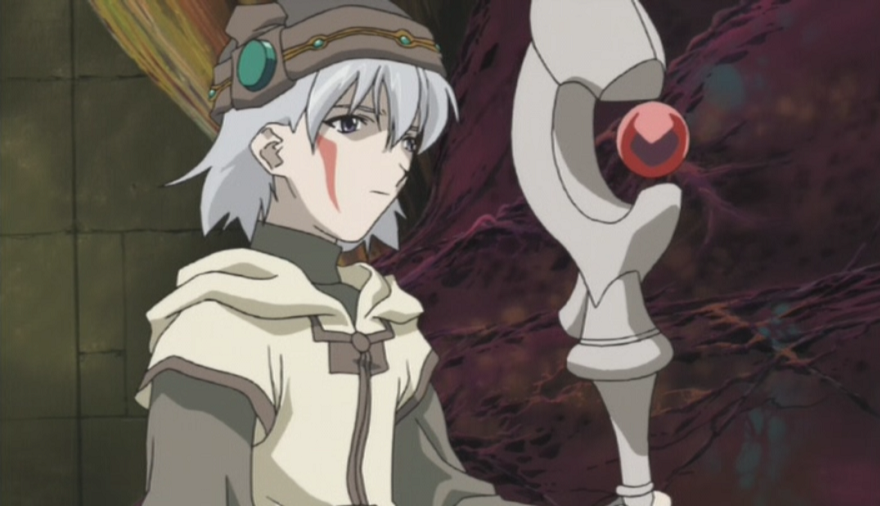 When it comes to the "stuck in an MMO" sub-genre, .hack//Sign is the prototypical example and perhaps one of the most well known. First making its appearance in 2002, the anime spawned a series of very popular games as well as an almost unnatural amount of sequels and anime offshoots. .hack//Sign offers up an array of MMORPG goodness, with perhaps one of the best and most unique musical scores you’ll find for any anime as well. It is also perhaps the first anime to introduce the concept of getting stuck in a virtual reality game world, a concept that has since taken off dramatically. 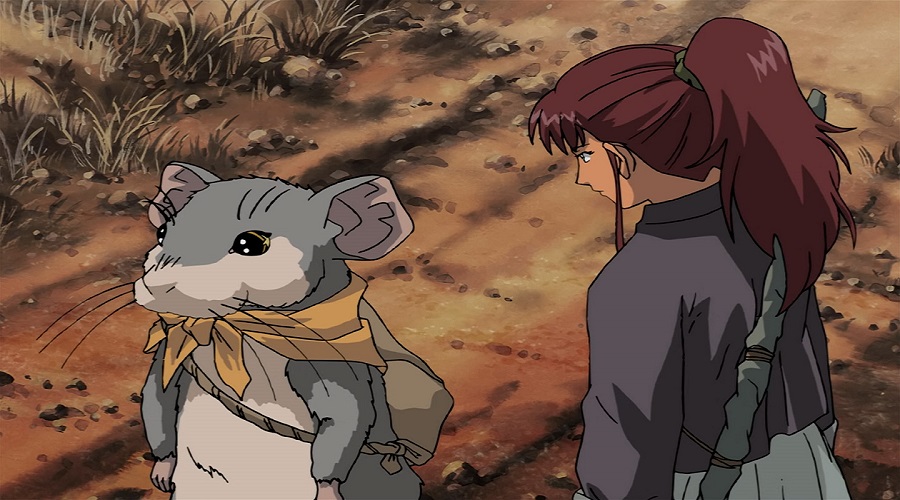 Although it’s a bit light on the RPG elements, Juuni Kokuki does exactly what most of the current RPG-styled anime do these days: Spirit the character away from their real world to one filled with swords, magic, monsters and imminent peril. Juuni Kokuki takes its inspiration from Chinese mythology, making it a rare treat for anime fans. 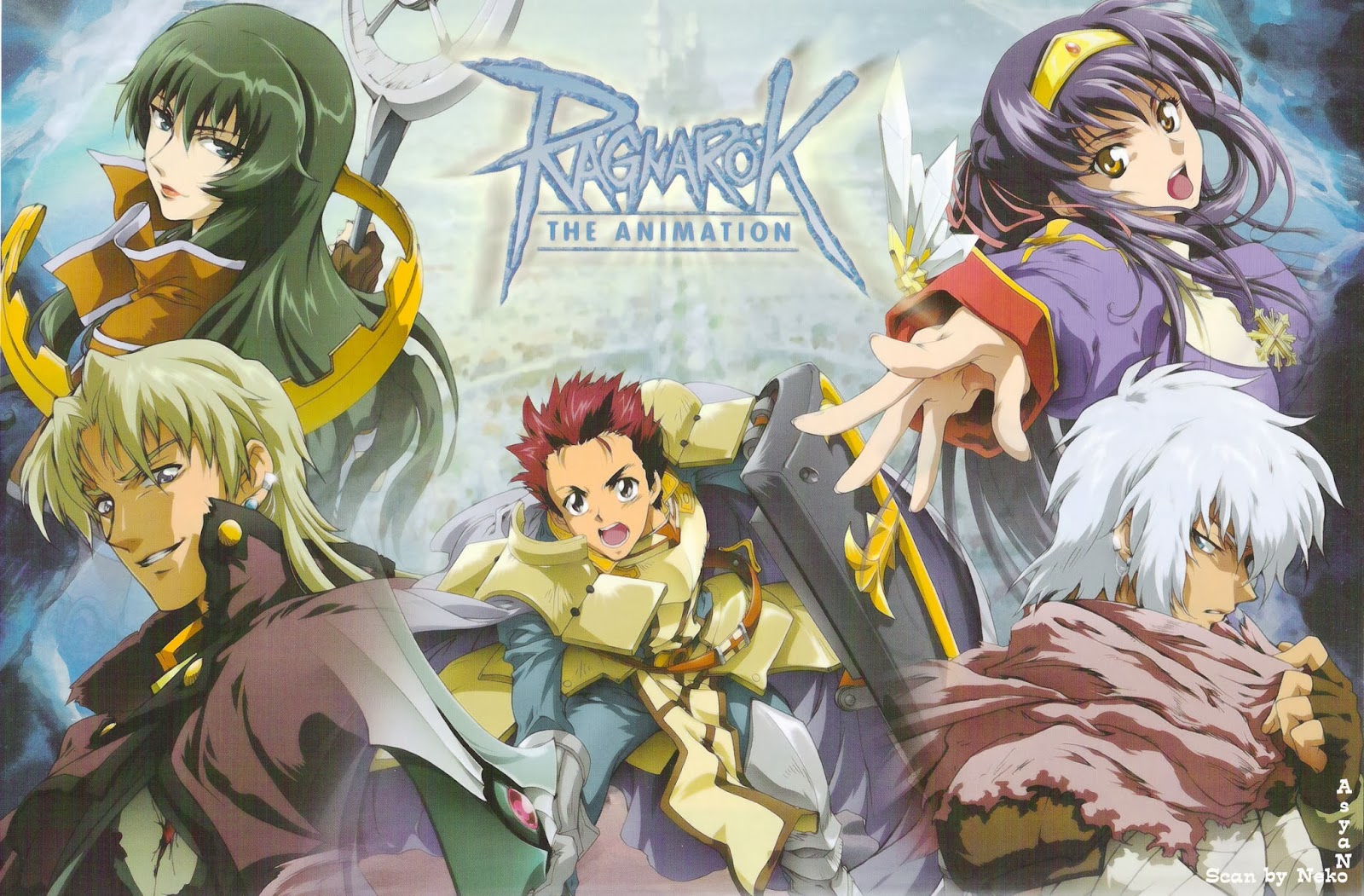 Ragnarök the Animation is based directly on the Korean MMORPG game Ragnarök Online. The anime follows the base game, with the same character classes taken up by character roles. Fans of the game who always wanted to know what an anime version of the game would look like may find this one to be a bit of a treat. The anime and the game follow Norse mythology, and the anime is about as game-based as you’re going to find.

Tales of Symphonia The Animation 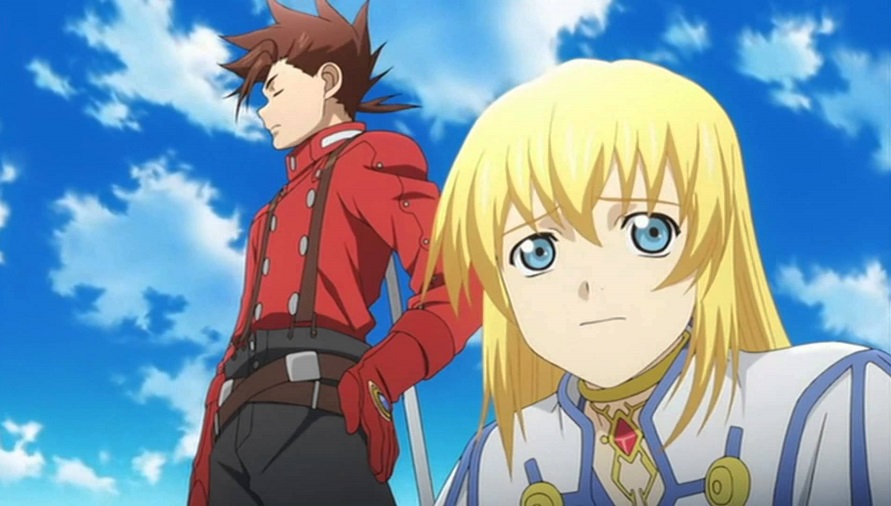 Tales of Symphonia The Animation is one of several game-to-anime conversions. In the same vein as Ragnarok and Phantasy Star Online 2, this anime follows the game, although a bit more closely than what you’ll find with either of the two. Because the game was very specific and did not focus on character made roles, Tales of Symphonia also follows the characters from the game as they journey their way to adventure. Swords and magic included, of course. 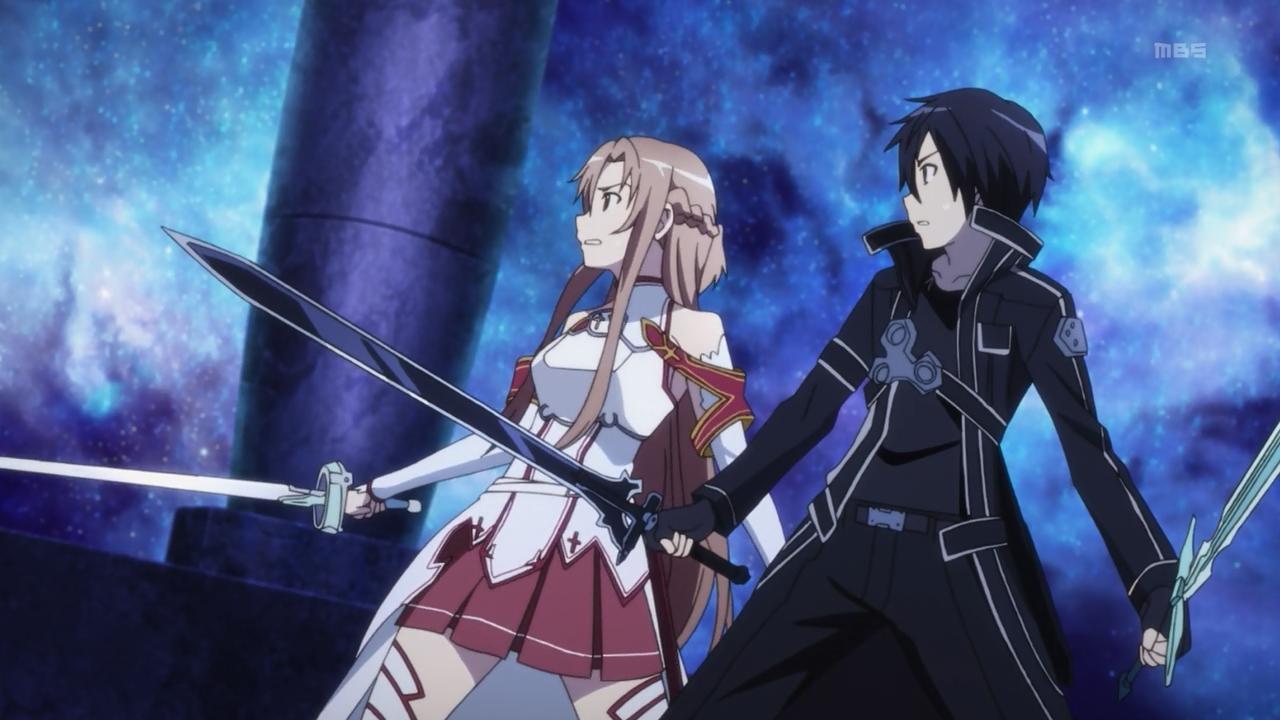 You knew it was coming! Since its inception, Sword Art Online has shaped itself into perhaps the most well-known RPG-themed anime. Because it crosses over several types of MMORPGs, it also makes use of more gaming elements than most other anime you will find. Classes, subclasses, levels, gears, raids, dungeon crawls―Sword Art Online has just about everything you can expect when you play an RPG. Like .hack//Sign, it even spawned a few video games based directly on the story. 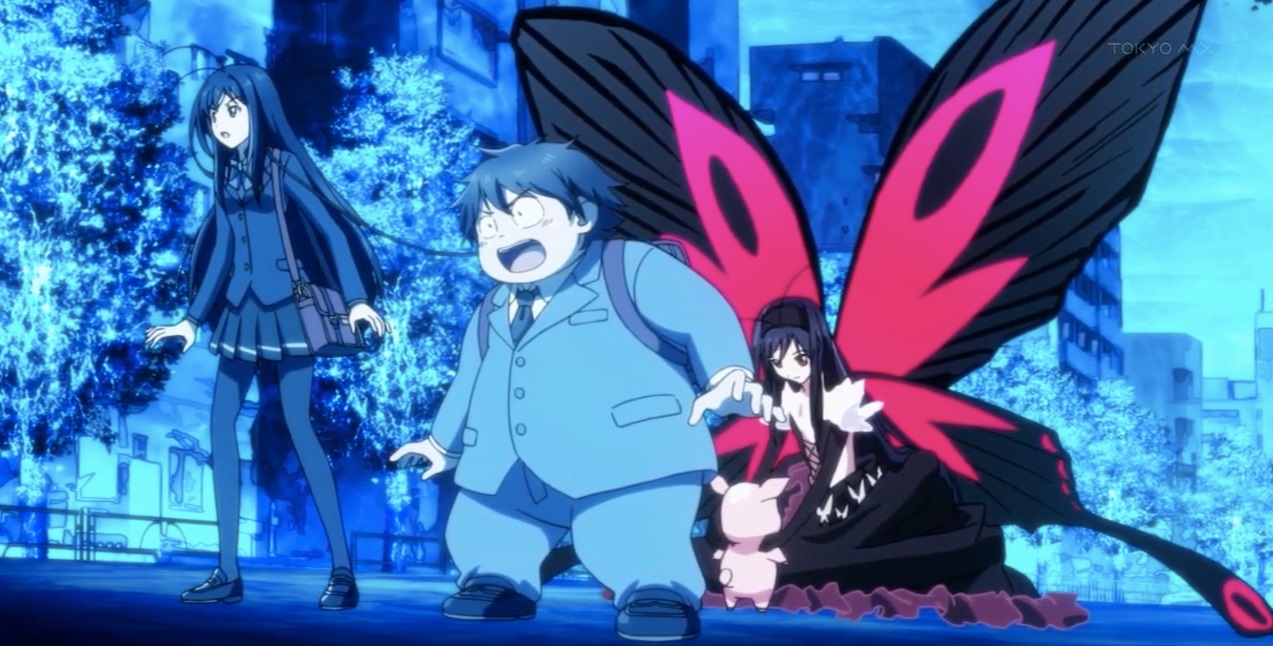 Accel World is similar to both Sword Art Online and .hack//Sign in its use of virtual reality gear to connect to the game. Unlike those two, however, the characters are not stuck in the game (phew!). In this case, the anime emphasizes the actual game, with little actual risk to the characters actual lives. Not that there isn’t some danger involved, of course. Despite less real-world life risks involved to the characters, Accel World throws a fair amount of tense moments for the characters and the audience. 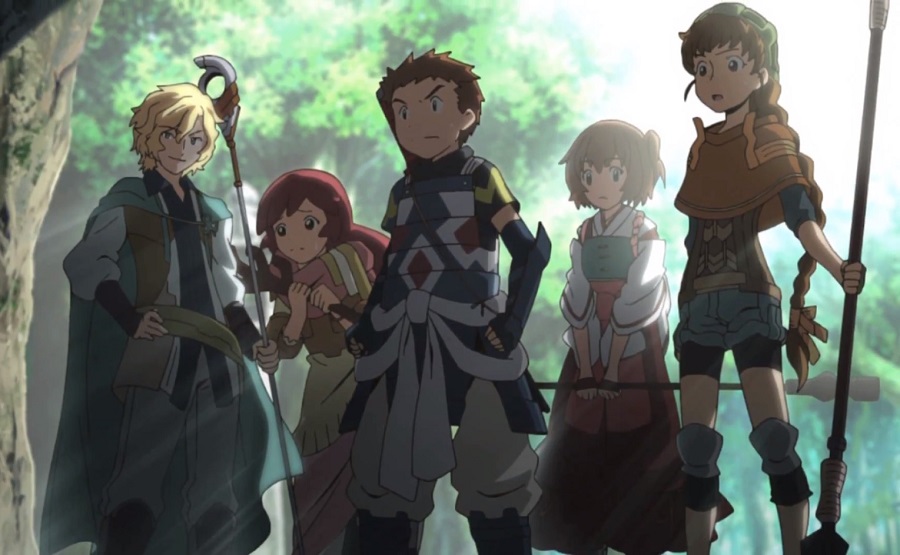 As imaginative as Log Horizon is, it isn’t quite for everyone. It focuses less on action and more on strategy and politics. But for those familiar with MMORPGs, strategy is extremely important and just a bit overlooked. As for politics, well...let's just say there's a far amount of this in guild-centric MMORPGs as well. Log Horizon takes a unique perspective on the genre, although it still has many of the stereotypes that .hack//Sign laid down when it entered the scene. Stuck in a game? Check. Different character classes? Double check. Lost memories? But of course. The emphasis on guilds makes it a bit like Fairy Tail as well, however the political underpinnings in the anime make the tone significantly more serious than Fairy Tail. If anything, the approach to the genre feels like a cross between .hack//Sign and Sword Art Online. 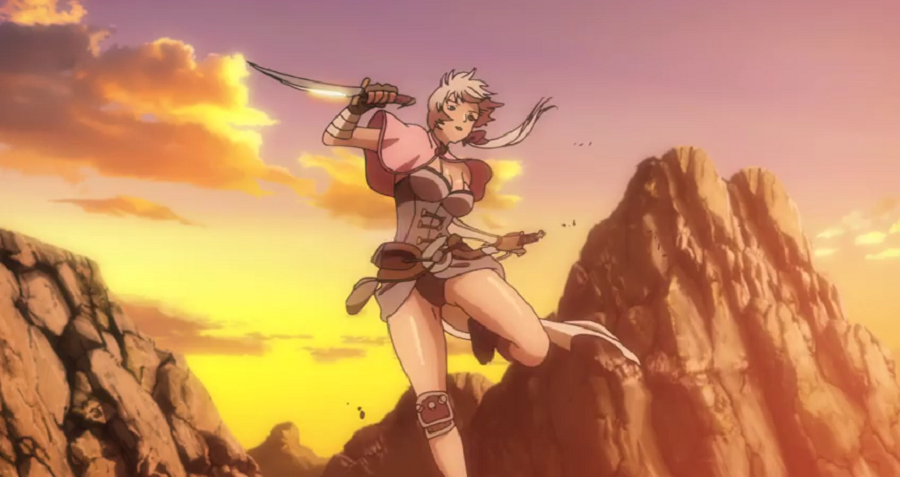 Blade & Soul is one of several game-to-anime adaptations in the anime world. It takes the sword and magic elements to the extreme, which helps earn it a 17+ R rating as well. There are obvious classes that you can find in most RPGs, which should come as no surprise since it was a game before it was an anime. The anime has a female protagonist out for revenge, which is not too uncommon for many RPGs.

(Is it Wrong to Pick Up Girls in a Dungeon?) 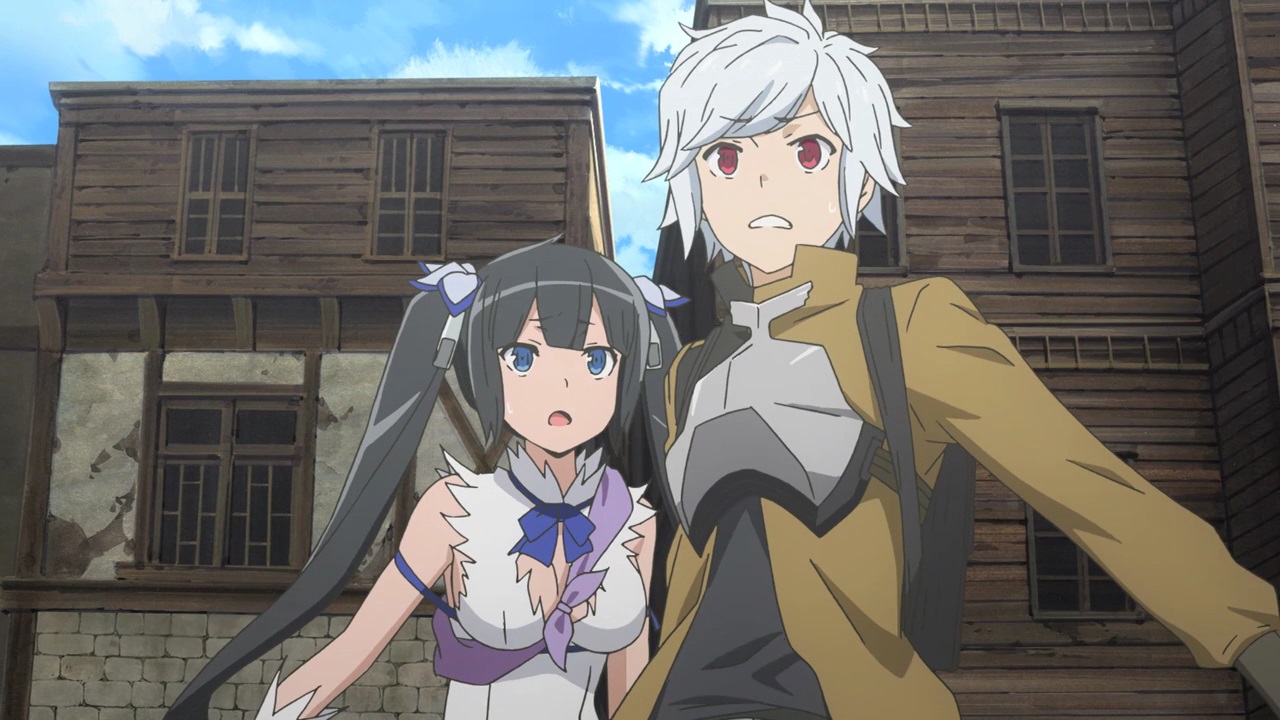 Outside of having a name that is just a bit of a mouthful, Dungeon ni Deai wo Motomeru no wa Machigatteiru Darou ka is also one of the most fun RPG-style anime one can watch. It’s a dungeon crawler at heart, which is a feature that immediately places it into the "RPG-style" genre, but it throws in classes and a leveling system that are about as interesting as you’ll find. Not only that, but the anime utilizes a good amount of mythology, which is actually somewhat common with RPGs and RPG-themed anime in particular. 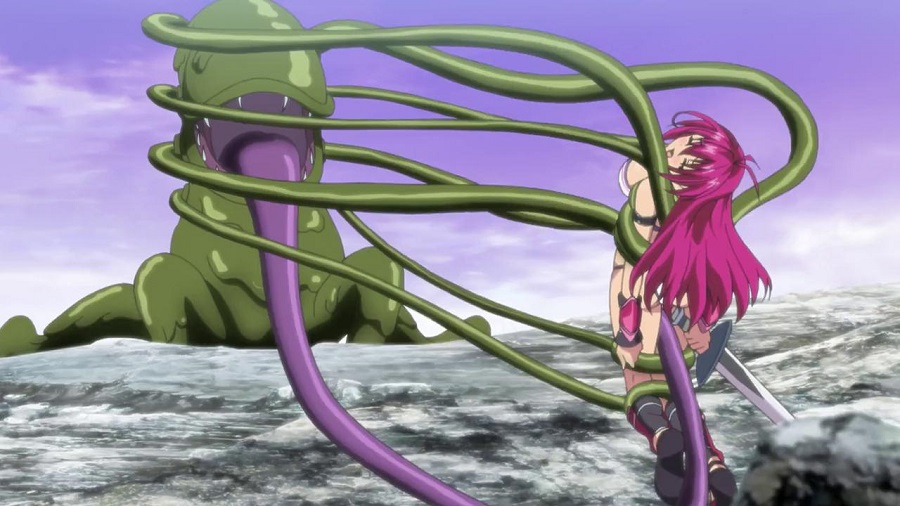 Bikini Warriors takes a comical (and astoundingly risqué) look at the anime genre. Its short episodes follow characters that are so stereotypical in their RPG roles that they don’t even have names―they’re just referred to by their role. Fighter, Paladin, Mage and Darkelf romp through their fantasy world making lighthearted commentary on different aspects of the RPG genre. All while wearing about as little as humanly possible, which itself is a thinly veiled commentary on the far-too-often ridiculously thin armor you find on women in RPGs. 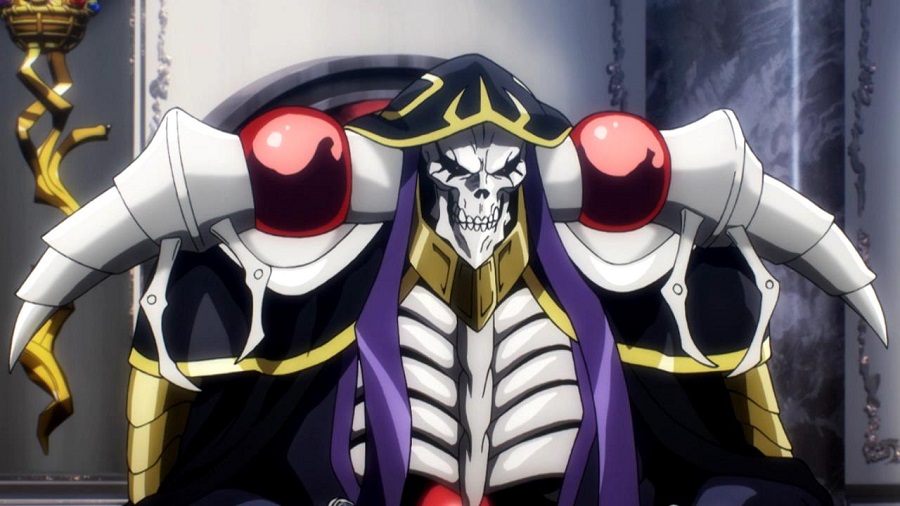 Most RPG-themed anime that focus on a virtual reality game usually begin with the characters getting stuck in the game. Overlord follows that pattern to the letter. In this case, it deviates from that structure by making the main character...want to stay. This is not too radical a change, of course. Most people play games as a bit of escapism, and if your game world is better than your real life, you might as well stay, right? 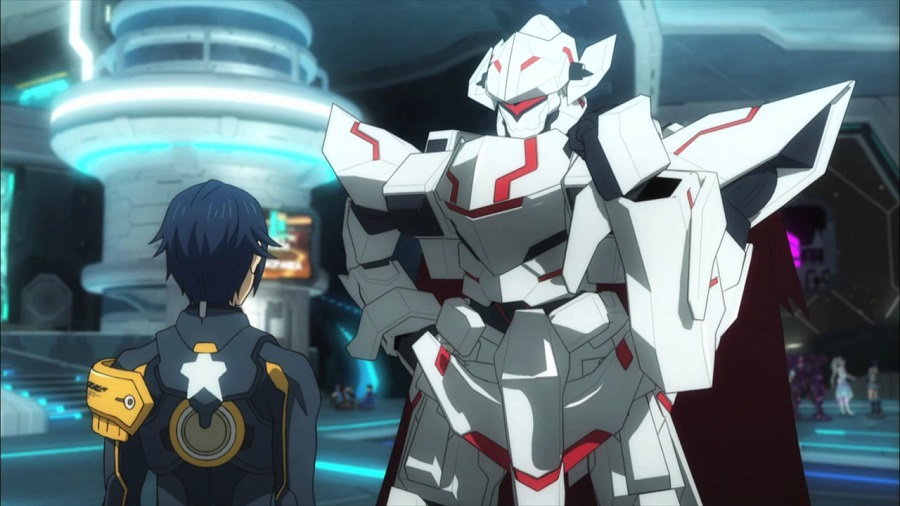 Phantasy Star Online 2 The Animation is a game-to-anime conversion much in the same vein as Ragnarök the Animation. Only in this case, it’s more of a high school drama with a video game applied. If you liked Accel World, you’ll find that the two share some commonalities on that end, although Phantasy Star Online 2 uses character archetypes that are just a bit more common. 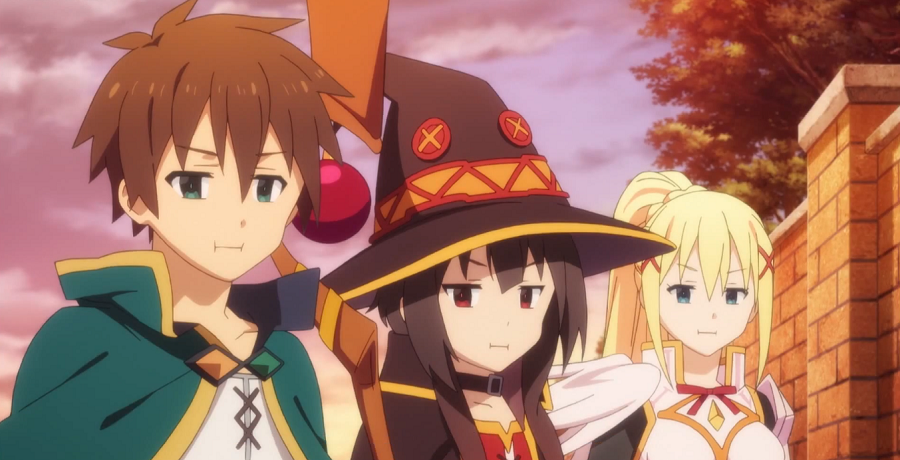 Kono Subarashii Sekai ni Shukufuku wo! takes many of the oft-repeated features of an RPG-themed anime and tosses them around in a hot-blooded mixture of iconoclasm. Instead of being thrown into a game, the main character actually dies in the real-world, only to be reborn in one that works just like a game. There are classes, guilds, boss monsters, hunting, raids. All those standard elements -- but with a nice comedy twist that makes this anime far different than any RPG-themed show you’ve ever watched.

Hai to Gensou no Grimgar (Grimgar of Fantasy and Ash) 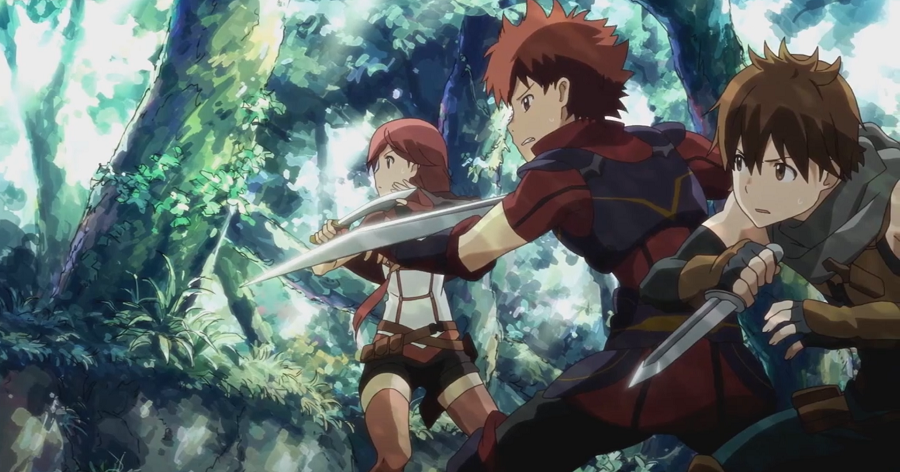 Yes, Hai to Gensou no Grimgar is an RPG-style anime. The only problem is that it doesn’t want to admit that it is. It’s takes a much grittier, darker tone than both Log Horizon or Sword Art Online ever reach, and does not utilize the RPG elements as a means of telling the story. Instead, it’s a purely character-driven drama that happens to take place in an RPG-style world. It does utilize some of the stereotypes, however. The characters wake up in a strange world, not knowing where they are and only a limited memory of where they came from. There are guilds, classes, skills, and weapon upgrades. But there’s death, and unlike with Sword Art Online or .hack//Sign, it’s a death that comes without an understanding of what is happening on the other end. There might not even be another end. That’s the real tragedy with this one.

RPG-themed anime seemed to trickle into the early 2000s with a few great showings. However, the niche has expanded in offerings so much in the past half decade that one could easily make an argument for it deserving its own genre. Much of this may be due to two specific factors. One is the increasing interest in virtual reality, and the promise of this type of technology being applied to games that could well mimic what we see in Sword Art Online or .hack//Sign. The other reason is the overwhelming popularity of RPG and MMORPG games in Asia. It also helps that the genre lends itself well to anime. After all, RPGs emphasize story telling, while MMORPGs offer a bit of escapism alongside the story. 2016 brings with it the promise of more anime for those desperate for more entries into the genre.

Pokemon has always featured Satoshi (Ash) challenging Gyms to win badges and enter the Pokemon League. But Gym battles are not the only path open to a Pokemon trainer. Aspiring, young trainers can also work hard to win Showcases, Contests, and a number of other events with their Pokemon partners.