Fairy Tail follows the story of Lucy Heartfilia who joins a wizard guild called Fairy Tail. Below are the 20 most tear-jerking moments from Fairy Tail. Be careful as this list may contain SPOILERS, and make sure that you get your tissues ready before scrolling down! 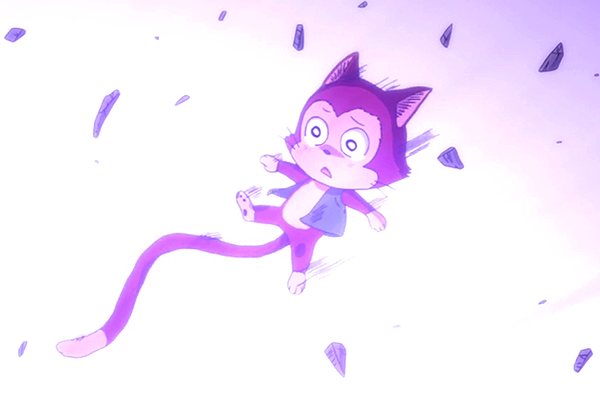 After Sting and Rogue’s loss against Natsu and Gajeel, Ziemma attempts to expel the two dragon slayers from Saber Tooth. Lector tries to defend Sting, however Ziemma hits him. 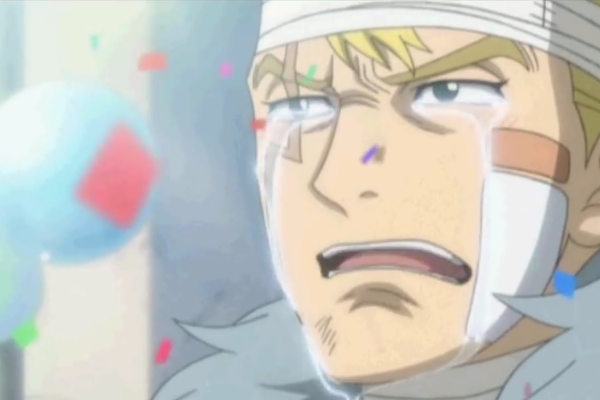 When Laxus wreaks havoc in the guild, Makarov makes a painful decision and expels him. During Fantasia, Makarov and the Fairy Tail guild members bid him goodbye with a gesture that Laxus made himself as a child. 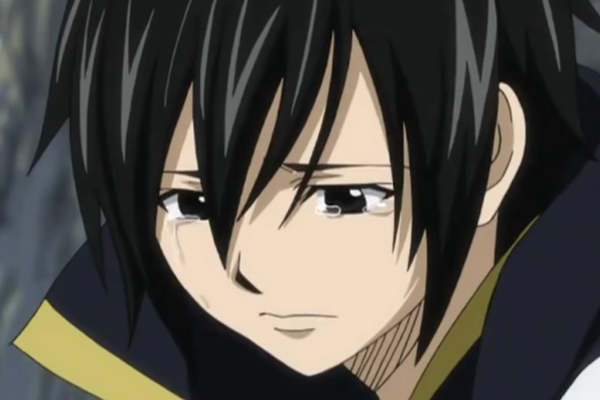 After Zeref cries at seeing Natsu and accidentally releases another wave of his Magic. He escapes from them and gets depressed as he claims that the world still continues to reject him. 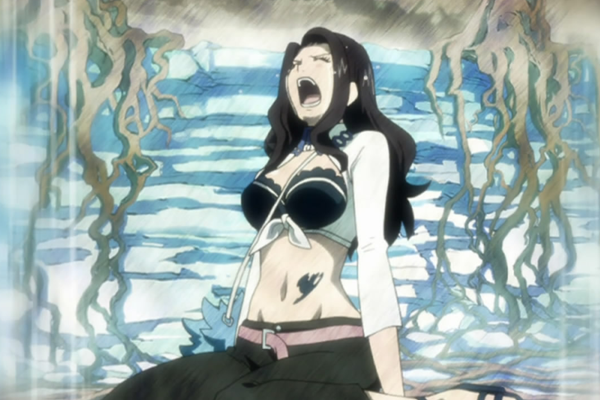 With Cana’s determination to become an S-Class wizard, she betrays Lucy in the process. Cana then realizes her mistake and becomes guilty of what she did to Lucy. 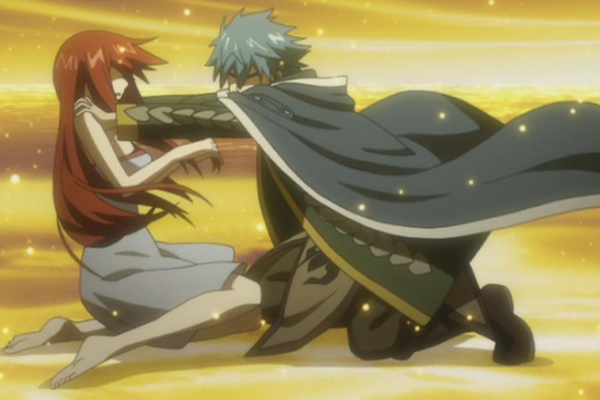 Erza tells Jellal that she did not think that she would be able to see him again. She cries and Jellal kisses her. However, Jellal pushes Erza away and tells her that he already has a fiancé.

Ul thinks that Ultear is dead 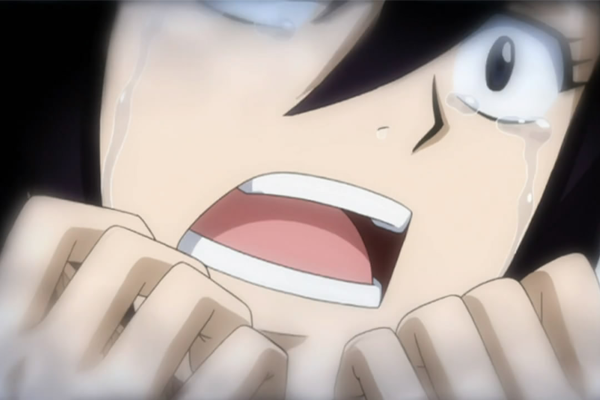 Ul leaves Ultear at a magic facility after believing that doing so would save Ultear’s life. However, the people from the facility makes Ul believe that Ultear is already dead. 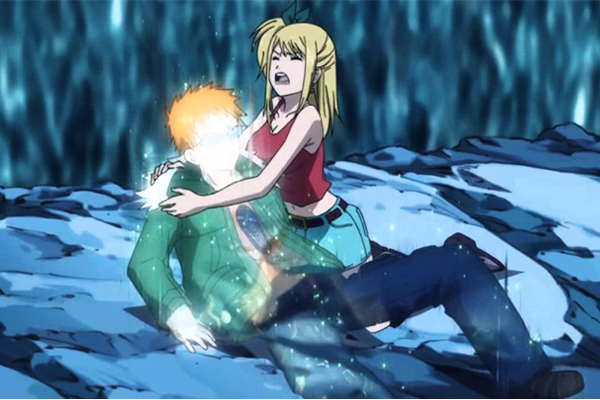 Loki becomes exiled from the spirit world after the death of his former master Karen Lilica. After three years of being in the human world, he gradually fades away. 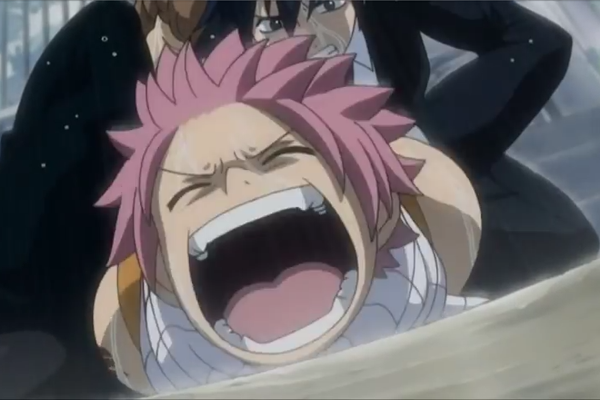 Erza dreams of her guild mates grieving for her at her funeral. Natsu then destroys the offerings on Erza’s grave and claims that she is not yet dead. 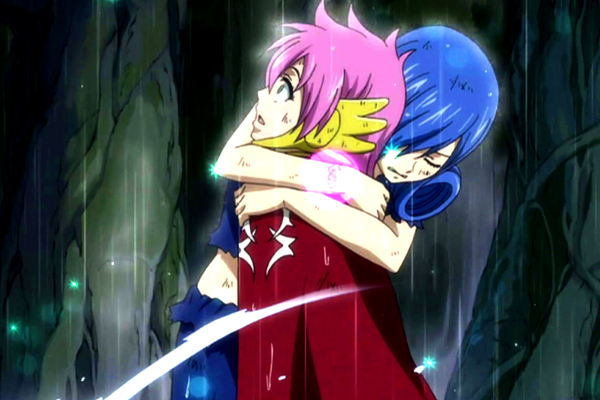 Meredy casts her Sensory Link magic on herself and tries to end her own life in order for Gray to die as well. However, Juvia hugs her and tells her that the three of them should live and move on. 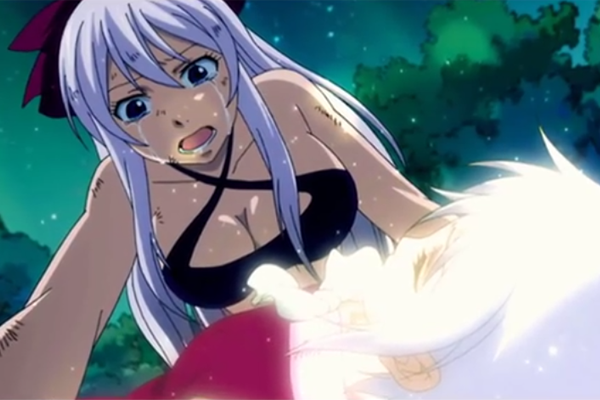 While Lisanna tries to revert Elfman back to his normal state, he accidentally hits her and sends her flying. Mirajane rushes over, however, an Anima opens and takes Lisanna into Edolas. 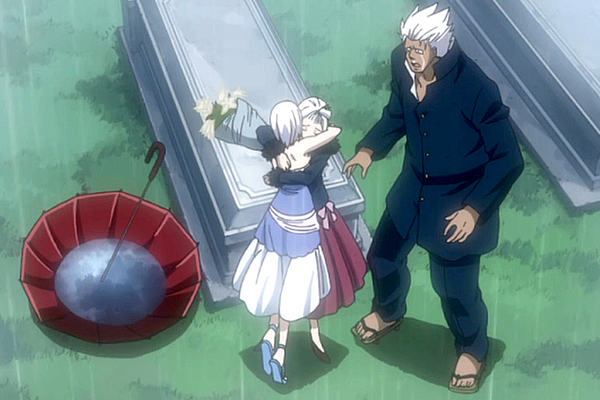 When the Earth Land Fairy Tail members learn that the Lisanna in Edolas is actually the Lisanna of Earth Land, they take her back with them. Back in Earth Land, Mirajane and Elfman visit her grave but were surprised when they see Lisanna again.

Happy and Carla learn about their missions 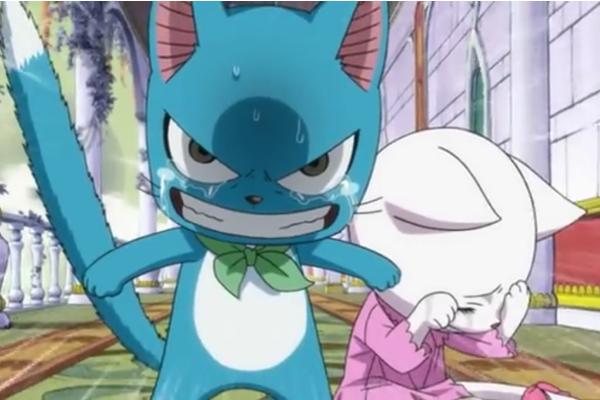 After Happy and Carla find out about their mission as exceeds, they both break down in tears after believing that they led their friends into danger. Despite the situation, Happy becomes determined to save his friends. 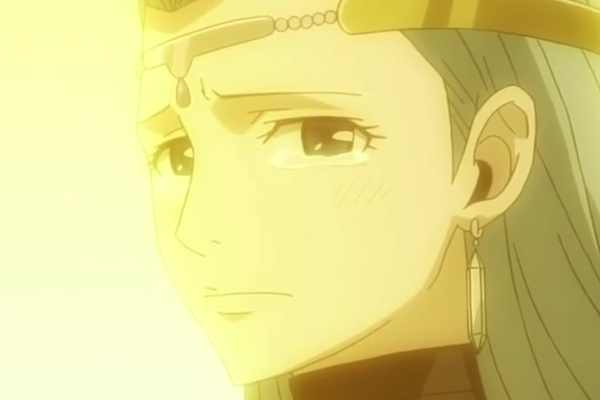 Lucy breaks Aquarius’ key in order to summon the Celestial Spirit King to save her friends. Aquarius then bids Lucy goodbye and tells her that although she hates her, she would still miss her. 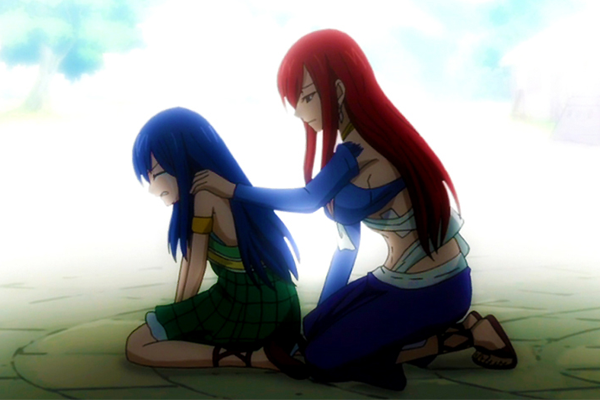 Wendy learns that Cait Shelter is not a real guild and that it is only made up of the spirits of the Nirvit people. Wendy breaks down after seeing Roubaul and her own guild mark disappear, Erza comforts her and asks her to join Fairy Tail.

Lucy cries for her father 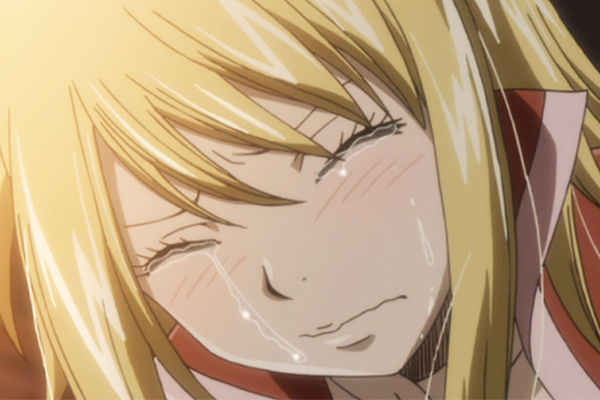 Lucy decides to visit her father after she returns from Tenrou Island. However, she learns that her father had already died a month before and reads a letter from him which details his hope that she was still alive. 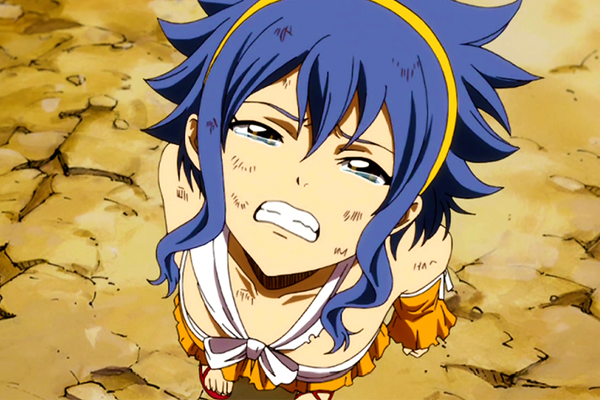 Levy sees a wounded Elfman carrying an unconscious Evergreen back to their camp. Levy cries out and hopes that everyone should unite and fight back against Grimoire Heart.

Gray grieves for Ul and Ultear 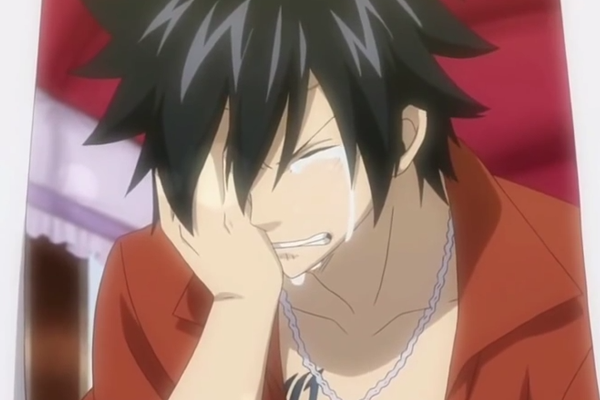 After Ultear’s sacrifice, Gray grieves for her. Gray then regrets about not being able to save both Ul and Ultear. 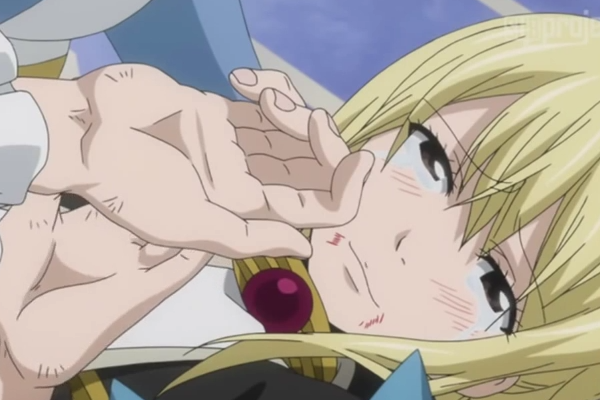 Rogue attacks Lucy. However, her future self jumps in front of her and takes the blow. 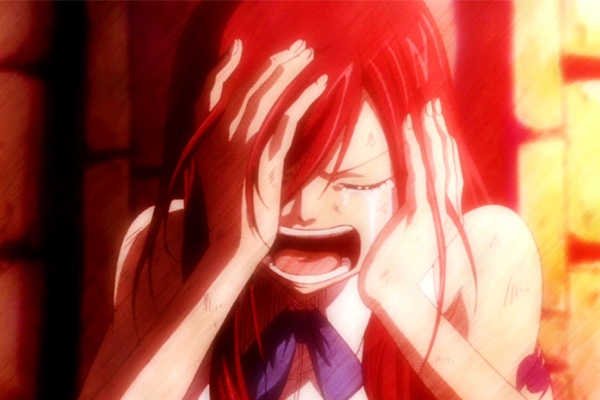 Erza witnesses Jellal being arrested by the members of the Magic Council after all the crimes that he has committed. She bursts into tears afterwards.

Fairy Tail members fight as one 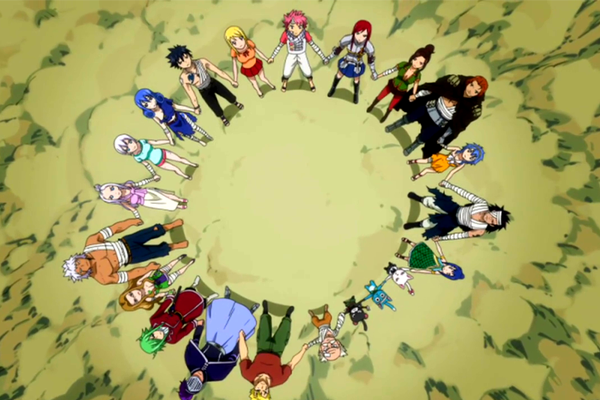 The Fairy Tail guild members refuse to leave Makarov alone. They hold hands and cast a defensive spell against Acnologia’s attack which seems to have erased the entire island, including the members.

To round off this list, lets finish with a bonus: the moment Erza discovers her magic!

Fairy Tailand Fairy Tail 2014 series follows the adventures and struggles of the Fairy Tail guild members. Their journey does not only contain happy moments but sad moments as well.