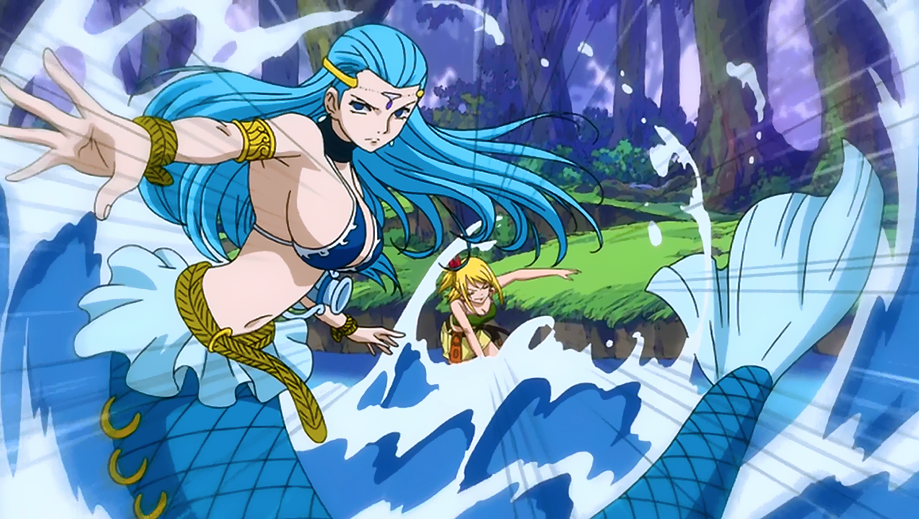 “The Water Bearer” celestial spirit is a moody mermaid, who like her zodiac counterpart, carries with her an urn that can draw out water to attack her enemies with Water magic. Her key was previously owned by Layla Heartfilia who then later left her key to be inherited by Lucy Heartfilia as a child. Aquarius is usually irritated and annoyed after being summoned, and takes her frustrations out on those around her, the only exception to this is her boyfriend Scorpio. Throughout the series Aquarius often teases Lucy for not having a boyfriend and often makes fun of Lucy in general. When willing, she can command great strengths of water with attacks like Bubble Shot and Water Pillar. Later in the series, in order to summon the Celestial Spirit King, Lucy and Aquarius sacrifice Aquarius’s key and end their contract together. Aquarius is then unable to be summoned ever again and presently cannot leave the Spirit World. 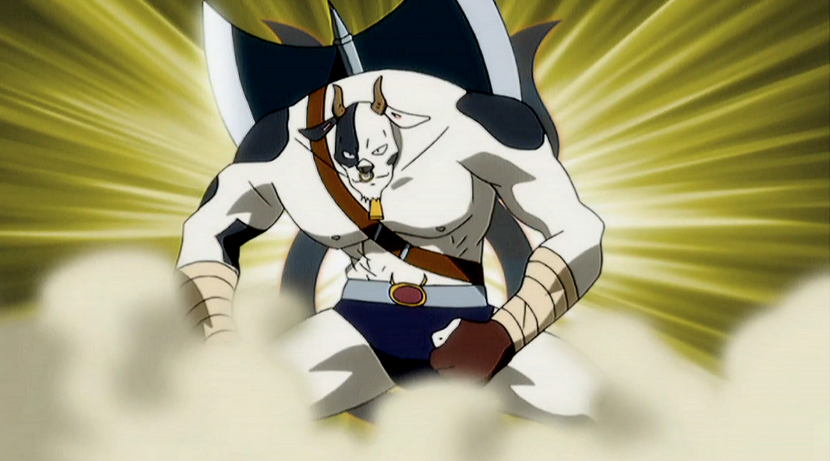 Don’t be fooled by his black and white spots, Taurus is a tall, strong Minotaur celestial spirit and he carries around with him his giant twin-headed axe, Labrys. Taurus has six udders that make him further resemble a cow, in contrast to his muscly buff figure. Taurus is a very perverted character often showing interest in Lucy and compliments her on her figure. From this interest, he takes it as motivation to protect her and when he does, he becomes a strong opponent. Taurus has immense strength that allows him to use his axe to use the attack Rampage that produces an earthquake aimed at his target. His key is currently owned by Lucy Heartfilia. 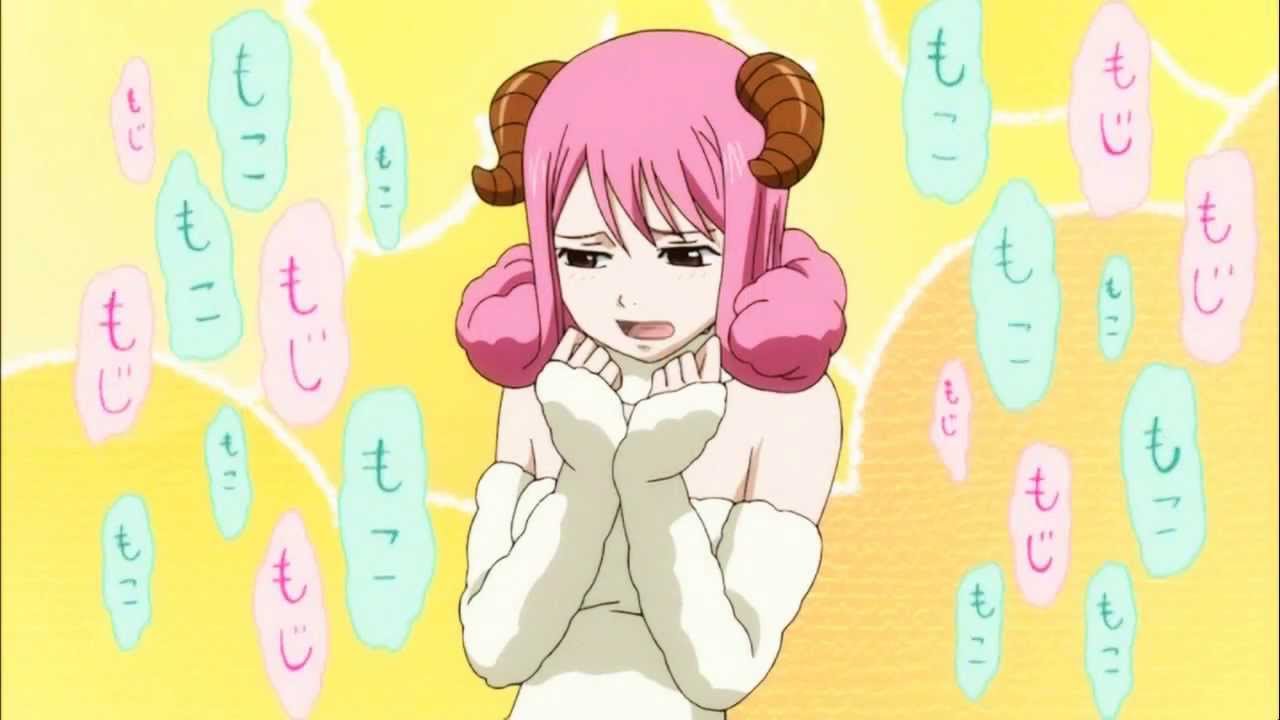 Resembling a young girl, Aries is a timid celestial spirit with horns on her head. She has the ability to relax her enemies, making them unable to fight. Before Lucy, her key was owned by Karen Lilca who was a celestial spirit mage from the Blue Pegasus Guild. Karen was a cruel mage who abused her spirits and treated them as tools. She specifically harassed Aries, to the extent that she used her as a shield in battles. Her Guild master Bob saw her mistreating Aries, and told her to be careful which led Karen to believe that Aries had snitched on her. Karen then assaulted Aries and as punishment was to keep her in the real world for a week to damage her spirit, until Loke intervened and summoned her himself. Loke remained in the human world until she would agree to breaking their contracts, but she never did which led to her death in battle. Unable to summon another spirit, Oración Seis member Angel, took Aries’ key. Angel later loses a battle against Loke as Lucy’s celestial spirit, and asks Lucy to form a contract with her. 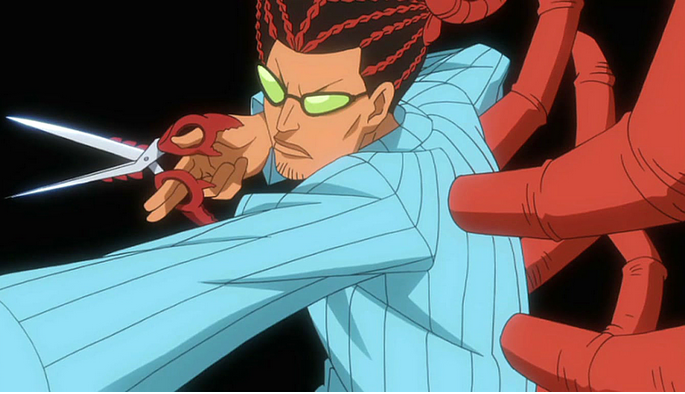 Lucy’s personal hairstylist, Cancer is your typical hairdresser just with an extra pair of legs growing from his back. His pair of scissors can make you look great while beating up someone in the process. Initially, Cancer’s key was owned by Layla Heartfilia and eventually was given to Lucy with Aquarius’ key. Cancer also uses his scissors as his choice of weapon, to the extent that he can give haircuts that’d make his opponents faint. 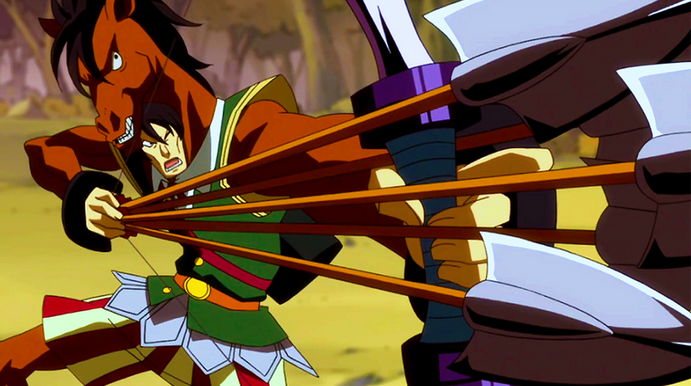 Despite his name, Sagittarius is more man than horse, or rather a man dressed as a horse. Sagittarius wears a horse-hat as part of his short green costume. On his back he carries his bow and arrows, and is a skilled archer. Lucy receives his Key from a mission to Galuna island. Sagittarius is a serious, formal and loyal spirit who follows orders from his master diligently. 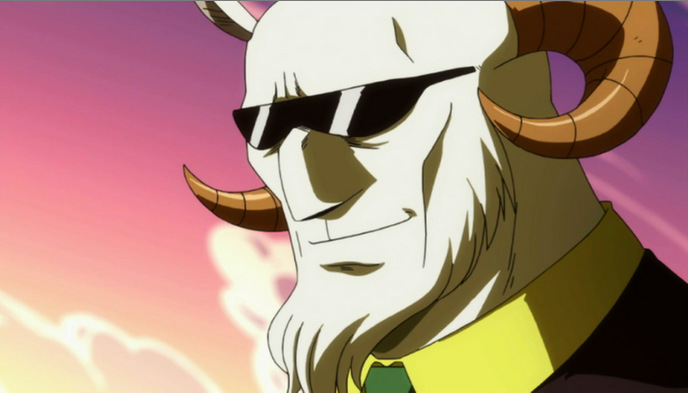 A tall humanoid goat who appears in a formal twin butler suit while wearing sunglasses. While in the possession of Zoldeo, his suit was more informal and only covered half of his chest and consisted of short sleeves. Capricon’s key was previously owned by Layla Heartfilia but was acquired by Zoldeo after her retirement. He was instructed to give it to Lucy if she were to take up magic but instead took it for himself and was later corrupted by darkness. Zelda broke taboo and used Human Subordination Magic on Capricorn that resulted him in possessing Capricorn’s body. Capricorn is then able to stay in the human world for 17 years and is recruited to join Grimoire Heart as one of the Seven Kin of Purgatory. Later in battle with Loke, Capricorn is freed sending Zoldeo back to his original form that leads to his death as his body vanishes away. Capricorn later fulfils Layla’s original intention and forms a contract with Lucy. 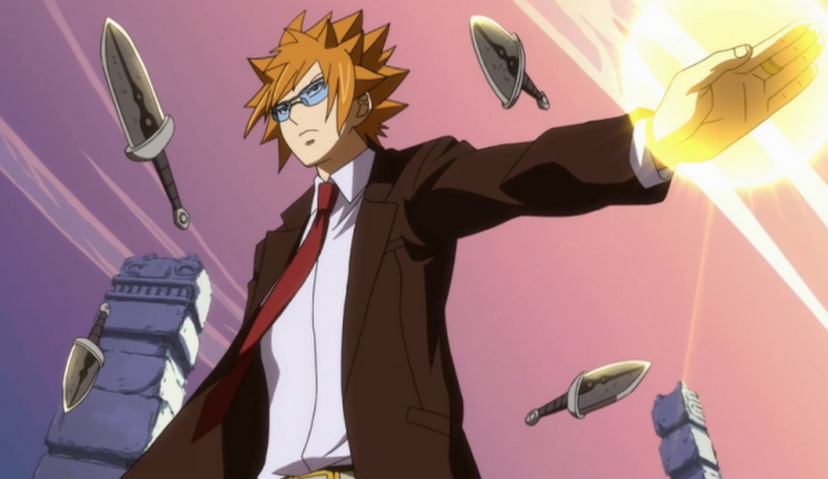 Leo represents the “The Lion” of the Zodiac and is the leader of the 12 Golden Zodiac Keys. Leo is more commonly known by his human name Loke, as a member of the Fairy Tail Guild. As a human Loke is a popular mage who is very flirtatious with women and was usually seen with a group of women. Loke’s human alias came as a consequence of a dispute between himself and his former master Karen Lilica. This was because Karen was torturing Aries, and pushed Loke to force himself to stay in the real world so Karen could not summon any other spirits unless she agree to break their contracts. Karen never agreed to do so and went into battle with Angel from Oración Seis and died. As a result, Loke is banished from the Celestial Spirit World as his actions had indirectly caused her death. When Loke’s spirit was dying the Celestial Spirit King appears and Lucy impresses him by her resolve to save her friend and her ability to summon all her current Gold and Silver keys at once. Loke is then instructed by the king to protect Lucy as his key materialises for her. Loke uses a type of Caster magic known as Regulus that allows him to produce light from his body to use for combat. 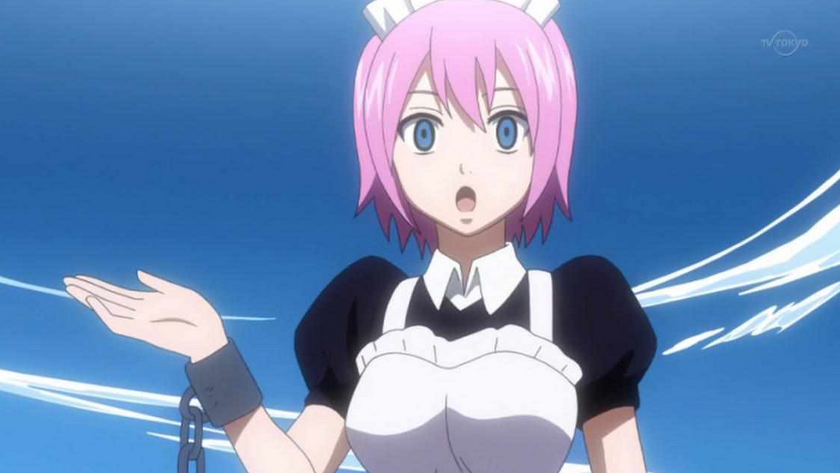 A celestial spirit who wears a black and white french maid outfit with chains hanging down from her wrists. When we first encounter Virgo in the series she appears as a strangely tall, overweight, buff old woman with twin ponytails. At the time, Lucy and Natsu are on their way to retrieve and destroy the book Daybreak, in which Virgo is summoned by Everlue, a corrupt politician. However, later when she forms a contract with Lucy she changes to a softer appearance with a smaller, and largely more attractive body than her previous self. It is an ongoing gag that Virgo is a stoic masochist and often asks to be punished after she has done something. Virgo uses Earth magic that allows her to dig holes through the ground with attacks like Diver, and she can also change her appearance through Transformation magic. 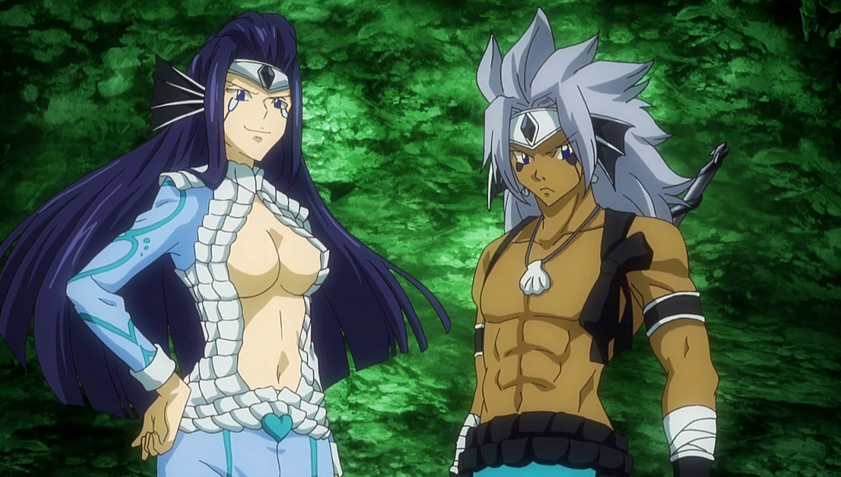 “The two fish” zodiac appears as two large fish, one fish being white and the other black. Their human form is that of a mother and son with dark blue hair, and her son with grey hair who have fish fins for ears. However, for these two fish when they make contact with water revert back to a normal pair of small fish rendering them weak. Their celestial key is currently owned by the celestial mage Yukino Agria from the Sabertooth guild, and first appear during their fight with Kagura Mikazuchi during the Grand Magic Games. Pisces use Water magic for combat. The mother uses Caster type magic using water for her movements, while her son uses it as a Holder magic to send waves from his trident. 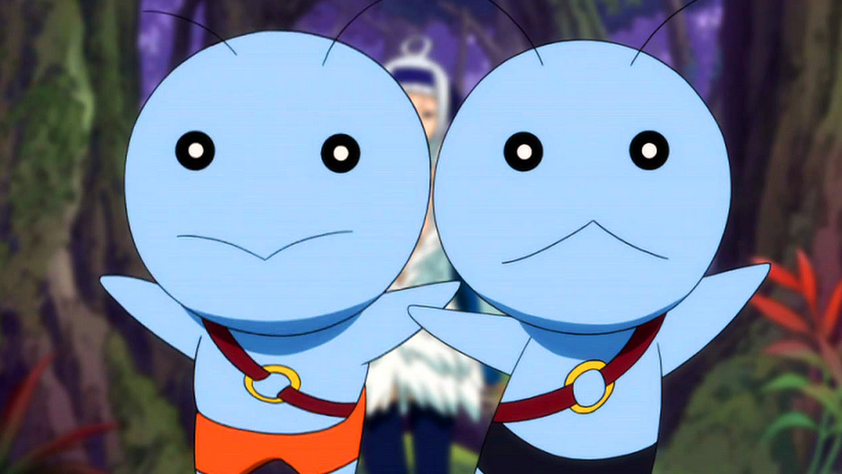 Gemini are two individual celestial spirits named “Gemi” and “Mini”. They appear as two small blue beings in twin outfits with a sash and shorts. Gemini first appear under a contract with Angel, a mage from Oración Seis. They are best described as cheeky in nature, as although they may have enjoyed their time under Angel, they just generally enjoy being mischievous. As a part of their abilities as a Celestial Spirit, they are able to transform into others through touch for a short period of time. Notably, when they transform they also obtain the memories, magic and recent thoughts of that person. This is later beneficial to Lucy during battle as just when they have the upper hand, they stop before finishing her off. As Gemini have just transformed into Lucy, they recall her affection and loving nature towards her celestial spirits and cannot bring themselves to hurt her. They are then banished back to the Spirit World by Angel but later after her subsequent defeat, Gemini along with Aries and Scorpio form contracts with Lucy. 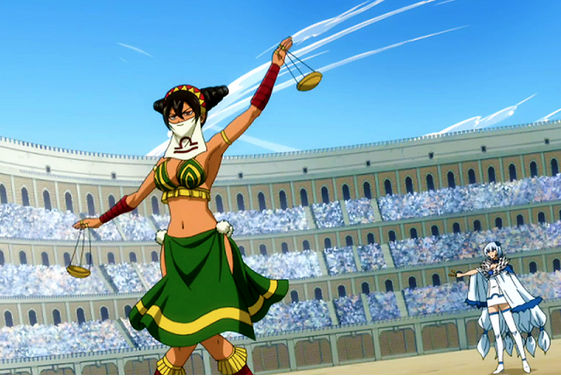 Carrying half a set of scales in each hand, Libra becomes the “balancing scales” Zodiac. Libra wears an Arabian-inspired dancer outfit and a veil over her mouth. Libra first appears during the Grand Magic Games after being summoned by Yukino Agria from the Sabertooth Guild. Her abilities play on the motif of her scales, as she is able to manipulate gravity. This is advantageous in battle as she is able to alter her or the enemy’s gravity. 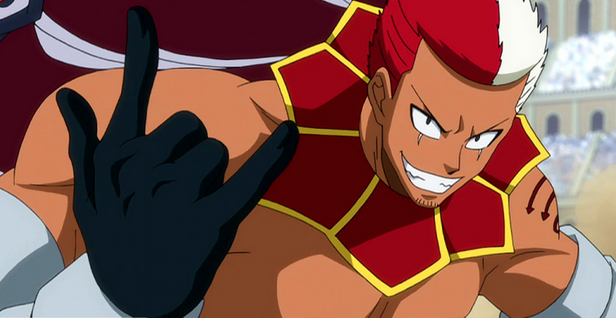 He is Aquarius’ lover, Scorpio is a tall, dark-skinned man with a tail of a scorpion. His hair is half red on one side, and white on the other. Scorpio was also previously owned by Angel before Lucy, but instead of participating in battle, he and Aquarius went back to the spirit world for a date. He along with Aries and Gemini after the battle and Angel’s subsequent loss, ask to form a contract with Lucy. Scorpio uses Sand magic on his enemies through his stinger, that acts like a gun to shoot sand at his opponents as the attack Sand Spear. He also has the attacks Sand Buster that acts as a large sand tornado, and Sand Wall in which he summons a large amount of sand to shield off attacks.