We all know that the ladies of the anime world are strong, smart and independent who know how to deal with difficult situations. But sometimes, even the toughest of anime girls may have to deal with heartbreak, tragic events or are so overtly emotional that those tears flow almost instantaneously.

And while we do prefer to see our favorite heroines smiling and happy, we just can't avoid the fact that they're also going to experience some somber and dire moments. Have those tissues handy, we're going to have a look at 20 of the saddest pictures of anime girls crying!

From Aa! Megami-sama! (Oh! My Goddess) 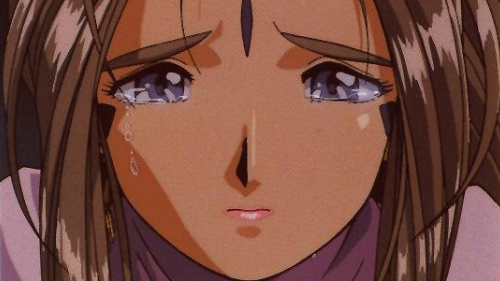 Have you ever seen a goddess cry? Well, it’s really saddening watching tears trickle down Belldandy’s beautiful face. It’s high time that Keichii does the right thing, and comforts Belldandy when she needs him the most. We can't stand seeing our favorite goddess in such a state!

From Hotaru no Haka (Grave of the Fireflies) 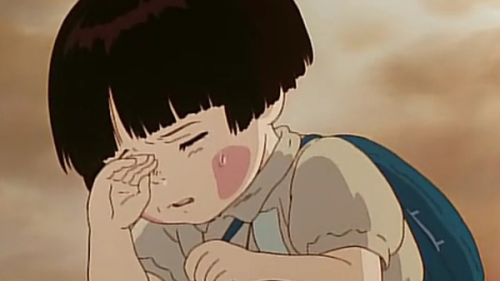 This one is beyond words. Setsuko and her brother Seita have lost their mother and home, and are trying to survive in the countryside under harrowing circumstances. Who didn't cry watching this movie? 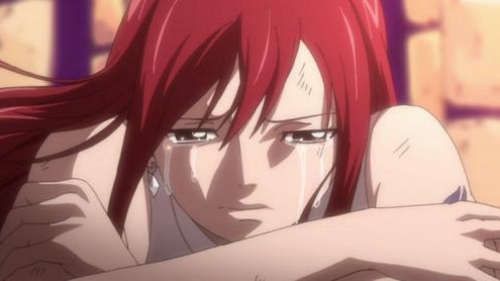 Ezra Scarlet is that crimson-hair beauty who you don’t want to mess around with. She’s powerful and tough as nails, and thus, very rare to see her down in the dumps. But when Ezra weeps, it’s as if the entire world is about to end! 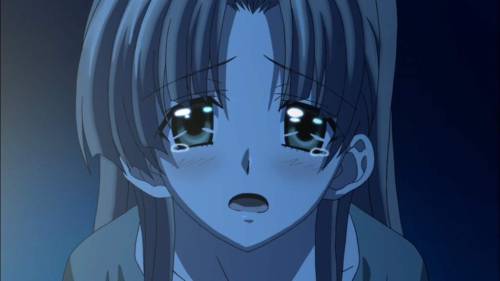 The devilishly cute but shy nun, Asia Argento is the kind of girl we definitely don’t want to see crying, but she just can’t help it. She’s the emotional sort who cries in Issei’s arms after he’s rendered unconscious by Riser’s pawns. Fortunately, Issei awakens much to Asia's relief - yet she's still teary-eyed! 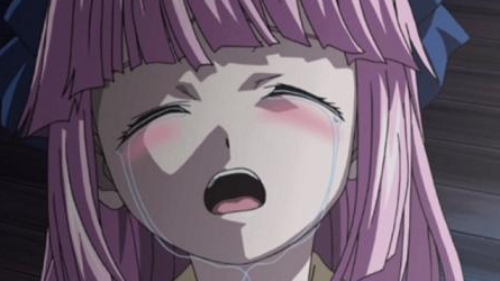 Some anime girls that we see crying are pure and innocent. At first glance, Mariko may seem to fit into this category, but then, looks can be deceiving. She’s a ruthless and sadistic killer who has no qualms at completely brutalizing her victims. Therefore, watching her cry just makes us feel completely conflicted!

From Ano Hi Mita Hana no Namae wo Bokutachi wa Mada Shiranai. (anohana: The Flower We Saw That Day) 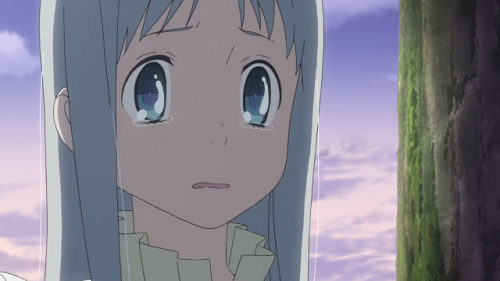 Meiko is cute as a button and, just so awfully nice that she would brighten up anyone’s day just by being besides them. While her upbeat and selfless personality is almost contagious. On the flip side, she does seem to cry a heck of a lot, especially when those around her have bad experiences. 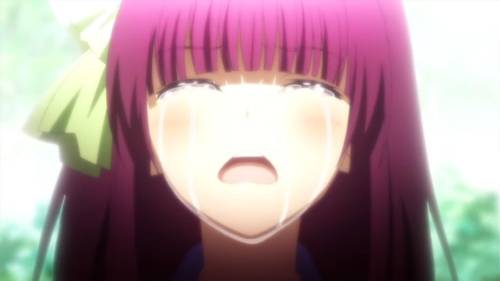 Yuri’s got it in for the big boss man. Yeah, she’s unhappy with God who she blames for her terrible fate. Nevertheless, she’s smart and charismatic with great leadership skills. She’s trying to do right to those around her, including her siblings. But sometimes, life’s circumstances (or should that be the afterlife’s) can be so difficult and frustrating, that Yuri can’t help but let the tears flow! 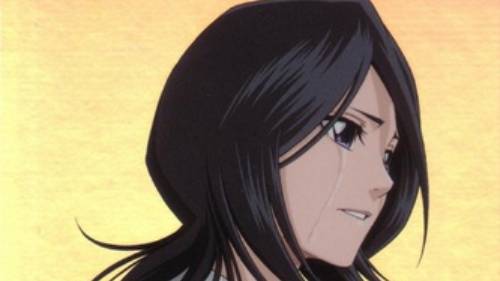 We get no joy from watching anime girls crying, especially when they’re fan favorites like Rukia from the epic Bleach series. And as one would expect from such a long running series, Rukia tends to cry a lot and in a variety of instances. After the things she's been through though, we’re not going to blame her for it. 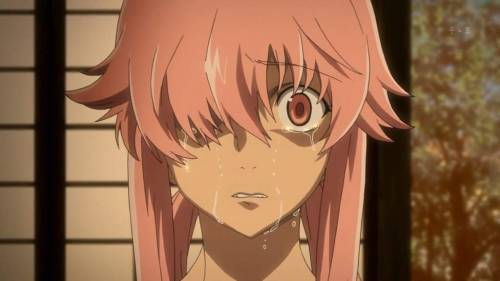 Yuno is a yandere, through and through. And she obsesses over Yukiteru to an unhealthy level. She even enjoys stalking him!

That’s why it makes us a bit weary and, perhaps even scared for our personal well-being when we catch Yuno crying like that. Did we mention that she’s always carrying a box cutter and is a certified killing machine? 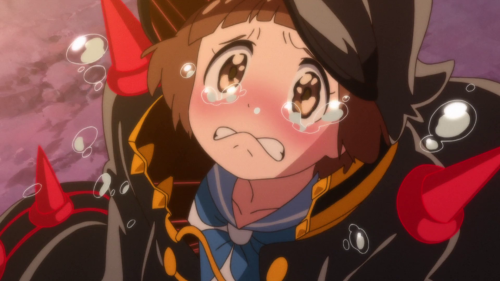 When we think of anime girls crying, few come up more vividly than poor little Mako. You can’t but help feel sorry for her, especially with how often she gets caught up in trouble and punished at the Honnouji Academy. Mako’s bawling just makes us cringe and wish for it to end as soon as possible.

From Dungeon ni Deai wo Motomeru no wa Machigatteiru Darou ka (Is It Wrong to Try to Pick Up Girls in a Dungeon?) 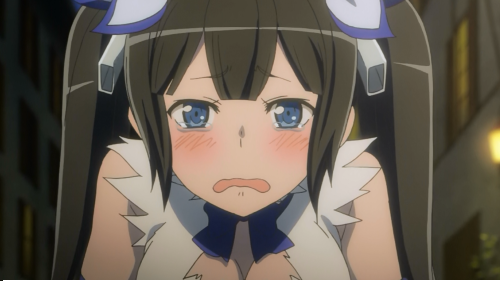 Hey, Hestia’s sassy with a very warm, colorful disposition. You’re bound to see her in a joyful mood, with a big smile on her face most of the time. But even this kindhearted goddess has her off days where her mood can sour. Worse still, she can become teary-eyed and end up on this list of crying anime girls.

From Code Geass: Hangyaku no Lelouch (Code Geass: Lelouch of the Rebellion) 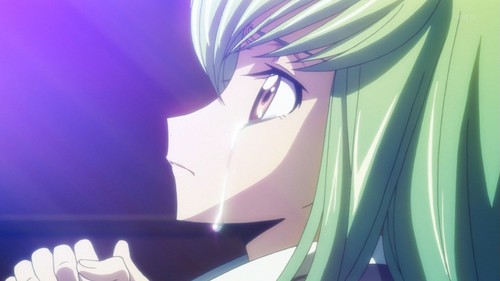 She’s immortal, never ages and capable of healing any wound. C.C. is the last anime girl you’d expect to see crying. And truth be told, she’s hardly a crybaby given her detached personality. But even this doesn't stop the waterworks during those deeply emotional moments. Personally, I just love watching her eat pizza!

From Akatsuki no Yona (Yona of the Dawn) 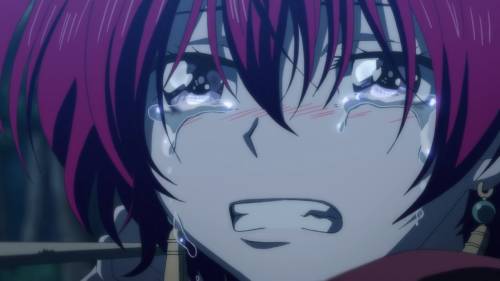 We’ve caught a variety of anime girls crying that come from different backgrounds. But what about princesses, do they cry given their pampered lifestyle? Oh yes they do!

Yona’s a princess who lives a life of luxury and plenty. But one day, her life of privilege comes to an end, thus forcing her to embark on a path riddled with blood, sweat and tears. 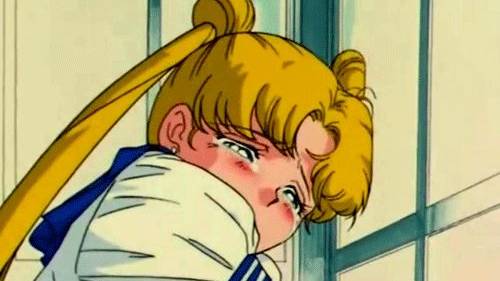 Usagi is Sailor Moon’s resident crybaby. Due to her lack of maturity and general goofiness, she’s bound to start crying for one reason or another. Nevertheless, we love her just the same. She does evolve as a character as the series progresses, and we still root for her whether she’s bawling or not. 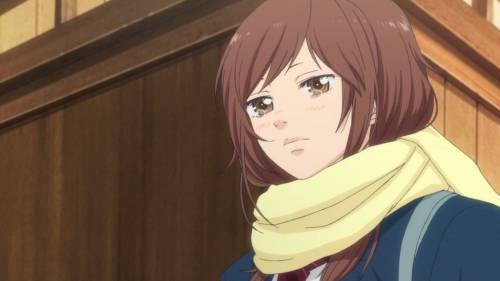 If there’s one piece of advice I can give the guys out there, it's to always carry a packet of Kleenex with them. They might encounter a girl such as Futaba Yoshioka, who has a dodgy relationship with the opposite sex. And we all know what this usually leads to – tears, lots of tears! 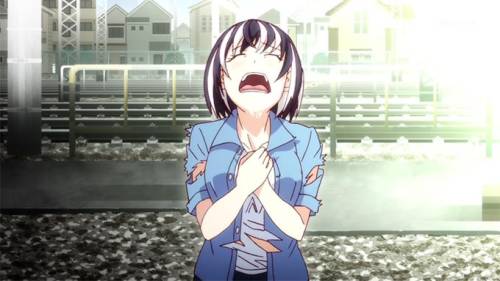 Is Tsubasa breaking down and tearing up because of her dicey hairstyle? Nah, it wasn’t exactly a bad hair day. Let’s just say that she just experienced an emotional roller coaster ride including confessing to Araragi, and then getting rejected. This is definitely one of the most dramatic scenes of an anime girl crying! 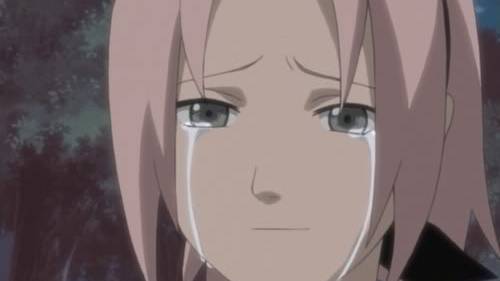 The cast of Naruto are no strangers to crying. What with all those tragic deaths that happen throughout the series, even a certain Mr. Naruto Uzumaki is prone to breaking into tears from time to time. However, Sakura seems to get emotional far more often. Especially when it comes to Sasuke. 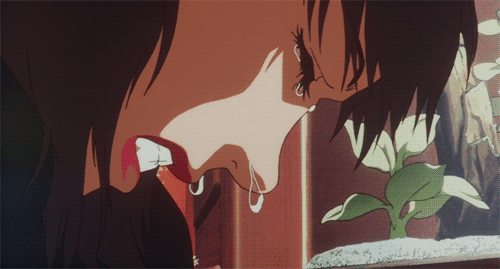 There are anime girls crying desperately, and then there’s Mima who’s the true face of despair!

Initially we encounter a fresh-faced Mima who seems to have a bright future ahead of her as a pop-idol. But then, a combination of the dark underbelly of the industry she’s working in, and her splintering persona throw her into the edge of madness. Her tears are the result of the fear, loathing and shame she experiences. 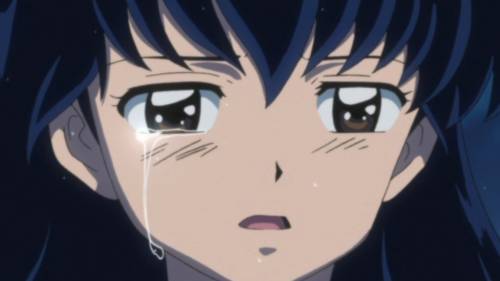 Kagome is just a well-rounded sweetheart who’s immediately likable, that we just can’t help but root for her throughout the Inuyasha series. And her heroism and old school charm is just the icing on the cake. It’s always so heartbreaking watching her cry that, we often wish there’s something we could do to make things better. 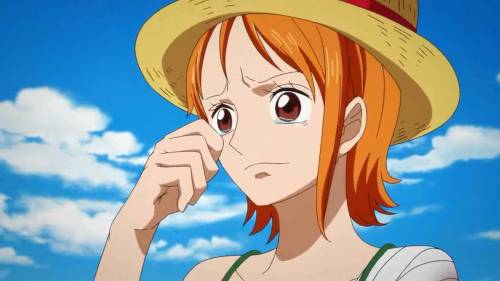 Now what can be said about one of our favorite girls in the One Piece series? That she's money-grubbing and manipulative, yet cool and attractive?! Well, yes she’s all these things and more!

Nami’s also got a softer side to her you see. She’s loyal to her comrades (even if they wind her up at times) and she’s been caught breaking down in tears, whenever anything bad happens to them.

So you checked out 20 anime girls crying, yet wish to see a few more. Okay, then just grab another box of tissues before we head further. 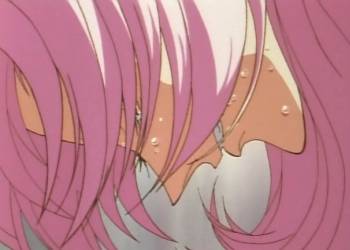 Utena Tenjou is as headstrong as they come. She has a strong sense of justice, fighting spirit and her eye on the prize. So, seldom does she break down and cry. But when she does, it’s a pretty dramatic yet short-lived experience.

Hitomi Kanzaki from Tenkuu no Escaflowne (The Vision of Escaflowne) 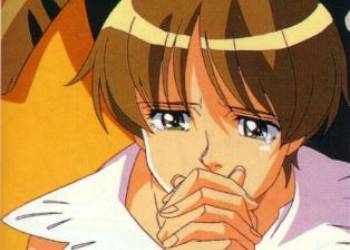 Hitomi Kanzaki is an ordinary teen schoolgirl, who’s transported to the fantastical world of Gaea. Here she meets several handsome and gallant men. She experiences joyous moments but also conflicted feelings. Tears are inevitable, as is the epic adventure in store for her!