It was an anime-original ending that didn't pull off a whole lot of surprises, but Jitsu wa Watashi wa closes with an episode that delivered the same kind of charm that's made the series so much fun. 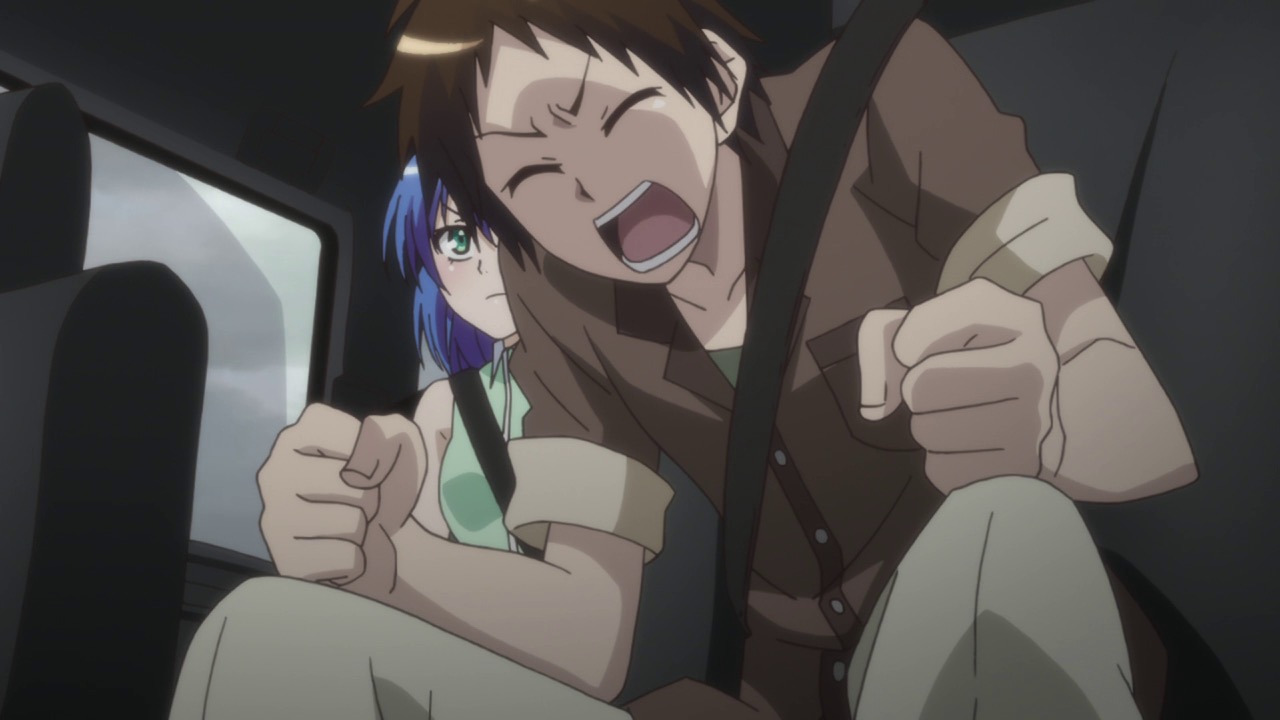 Jitsu wa Watashi wa was one of those under-the-radar comedies that never quite seemed to break through and grab the consciousness of anime fandom. This season had a couple of them, I'd say. Joukamachi no Dandelion was a bit reminiscent of Minami-ke in tone and style, but not quite as good. And Jitsu wa had something of a Majimoji Rurumo vibe, but again not quite as good. 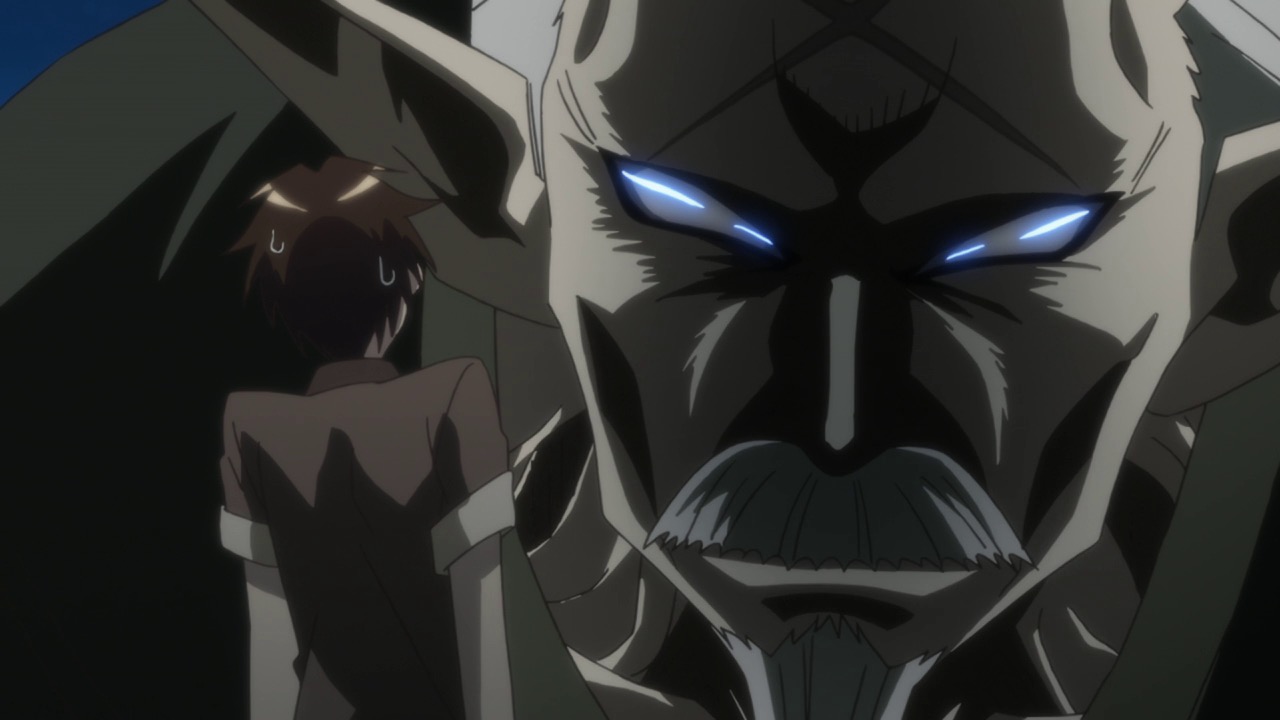 That's not to say both of those shows weren't enjoyable, mind you - they were. I had both ranked as sleepers going into the season and I think they both lived up to that billing to a good extent. Why do I say this series reminds me of Majimoji Rurumo? Well, there's something reminiscent in the art style, certainly. But more than that there's a genuine sweetness to both series that I really like, and they both feature characters who aren't exactly the sharpest knives in the drawer, but are thoroughly likeable in spite of that. 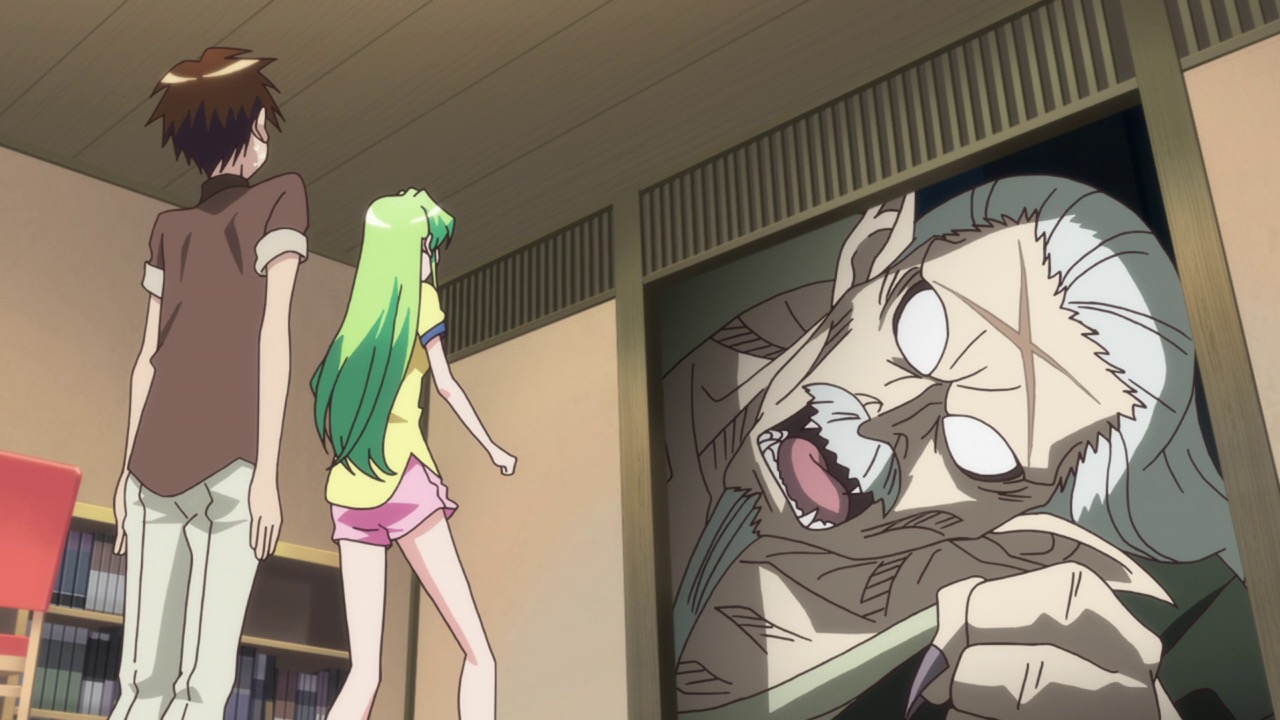 This final episode took a tack that a lot of anime comedies do, especially when they go original for their finales - a lot more action than at any other point in the series. That doesn't always work too well, but it holds its own here. Why? Because Jitsu wa Watashi wa doesn't let itself get "serious" for too long, even as the story comes to a boil. The irrepressible silliness that's an intrinsic part of the show's appeal is never far from the surface. 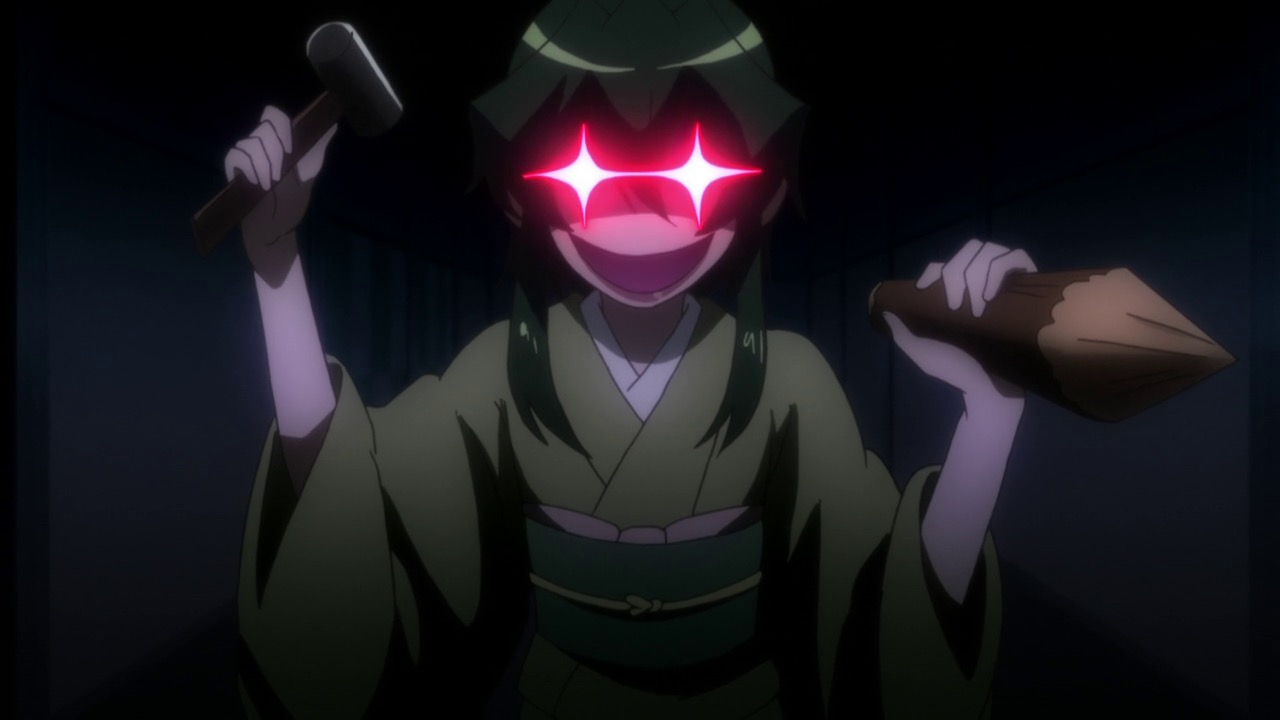 As you'd expect based on last week's episode, Asahi decides to chase down Youko and bring her back from her father's clutches. Assisting in the operation are Nagisa, Shiho, Akane and Akari - though in Akane's case "help" is a term that must always be applied loosely. The extent of her contribution is to trash Akari's new car in exchange for getting the kids to Youko's family mansion before morning. 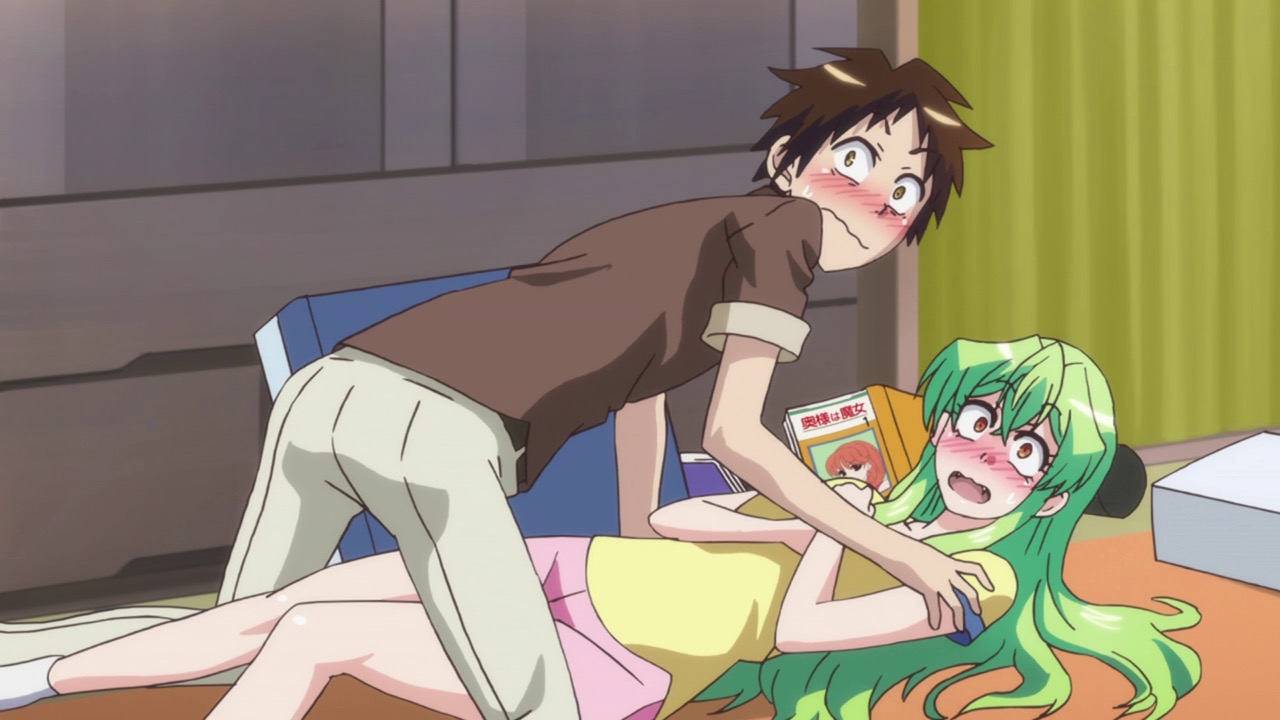 We met Youko's dad Genjirou very briefly before - long enough to know he was played by Koyama Rikiya - but I don't recall any hints that he was the preposterously huge dude he turns out to be (are all vampires that big in this universe?). Genjirou's unusual size is the source of much laughter in the episode - tiny teacups, tiny cellphones - but his overprotectiveness is no laughing matter. And it's no surprise he's not to glad to see a high school boy sneaking onto his property to kidnap his daughter. 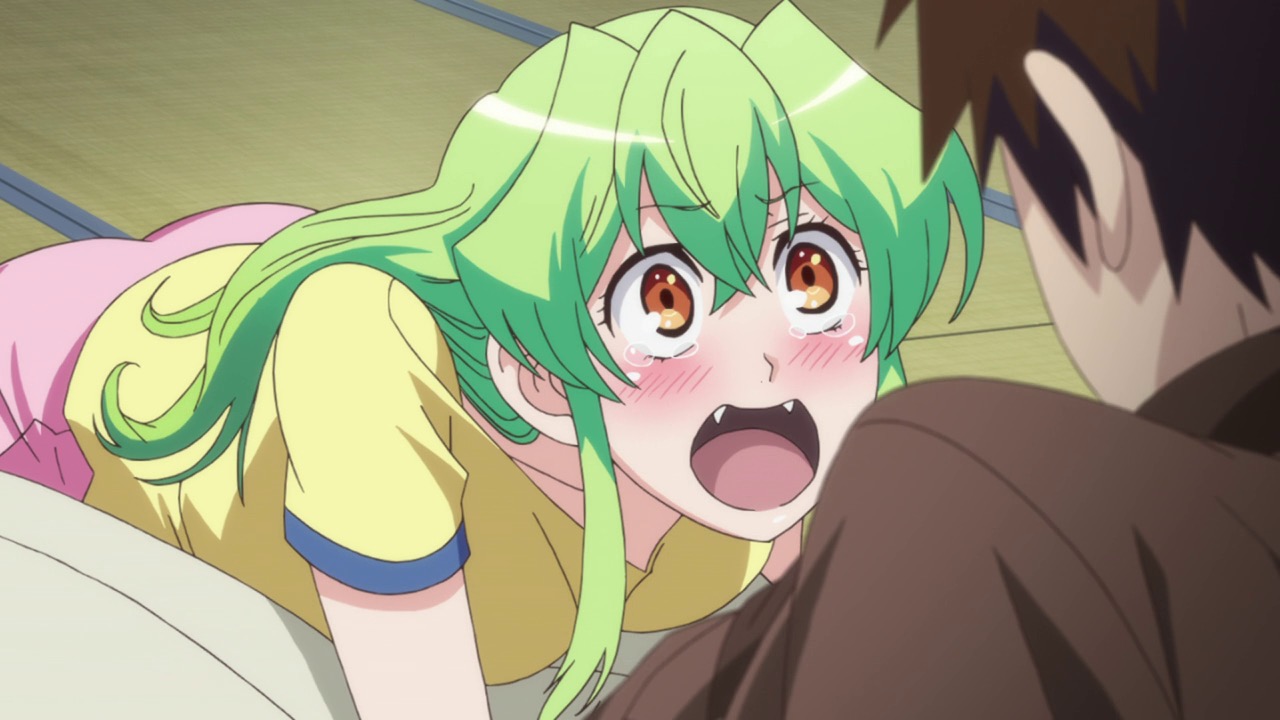 This whole drama is a bit of a false lead, in that the whole thing is a misunderstanding as Youko was only called home to take care of her sick mother and Genjirou's bark is worse than his bite. But it's fun nevertheless, and there is some real drama in Nagisa's conflicted nature over what she's doing helping Youko and Asahi get together. We also meet Youko's Mom Touko, who's played by Hikasa Youko (say that sentence three times fast) - who turns out to be the only person Genjirou is actually scared of. 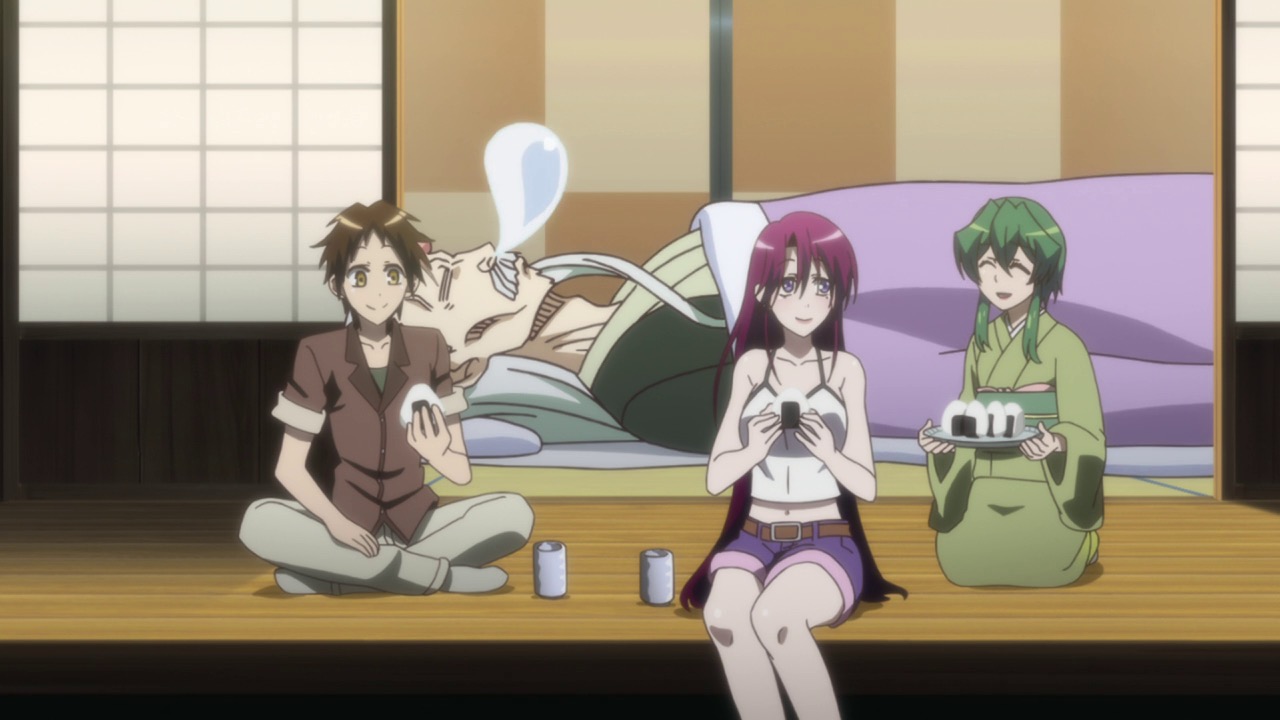 Banana peels, memory-erasing hammers, garlic balls - this is pretty much your classic Jitsu wa slapstick dressed up in finale clothing. As last episodes go it's not among the most final you'll ever see - there's no real resolution romantically - but given that the manga is still ongoing the ep does a pretty good job getting the story to a place that seems like an actual save point. 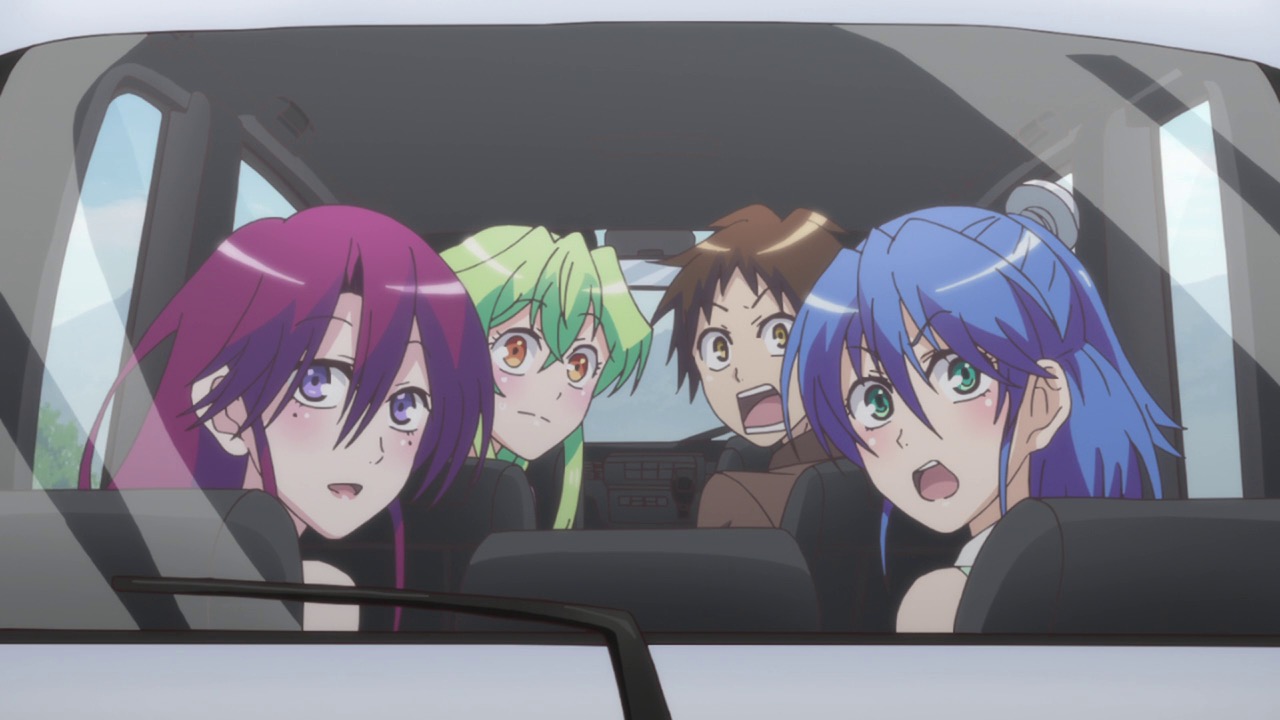 Clearly, this isn't a series that's going to change the way you think about anime, or sell 10,000 Blu-rays. But it's good, (mostly clean) fun and for me, very hard not to like. It has the same innocent zaniness and soft ecchi that so many great anime comedies of the 90's and 2000's did - in fact, I think it captures that feel as well as any series in years. I haven't read the manga so I can't speak to the changes the series made, but I'm glad I was able to enjoy it for what it was without being burdened by that baggage. Every season is better for having a couple of shows like Jitsu wa Watashi wa, and I'm always happy to have them around.

Let's look at the main character of Watashi ga Motenai no wa Dou Kangaetemo Omaera ga Warui!, Tomoko Kuroki, and see what makes her personality and circumstances the way they are―awkward and extreme!