If you find yourself under the rule of a queen, hopefully she is a noble and just ruler who makes you want to cry "God save the queen!" Some subjects are less fortunate and find themselves screaming "God save us from the queen!"

Moral ambiguity aside, any queen who does not want to lose her power in a game of thrones needs to be intelligent, graceful, or downright brutal to achieve their goals, be they good or evil.

From: No Game No Life 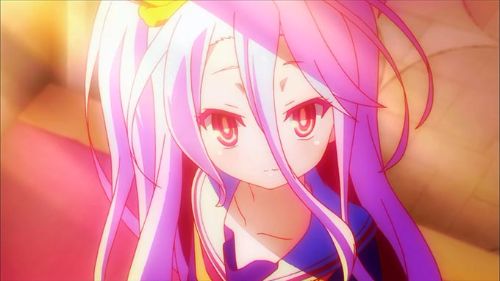 Along with her step-brother Shiro, Sora was once considered the top gamer on Earth. Their skill was so great that they attracted the attention of Tet, the God of Games, who brought them to a world where conflicts are solved through games rather than fighting. Sora and Shiro were quick to win a tournament and become king and queen of Elchea.

From: Kyoukaisenjou no Horizon II 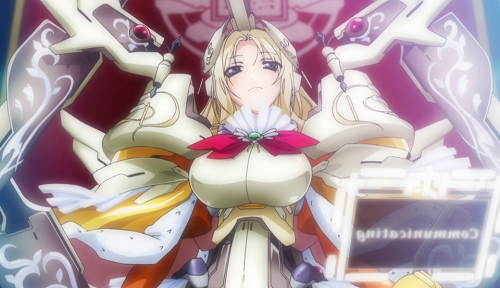 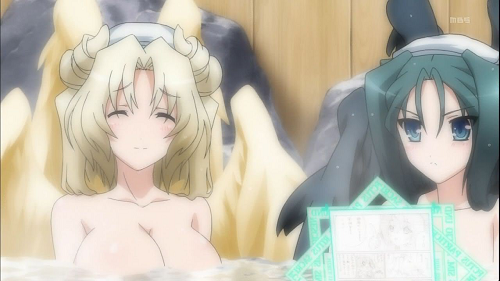 The Queen of England is a... half-fairy? She's also a student at Oxford Academy (based on the real-life uni of the same name), and serves as its president. The blue-eyed beauty is, quite predictably, very haughty and extremely 'self-assured', though her ditziness certainly goes a long way in making her more likable.

From: The Twelve Kingdoms 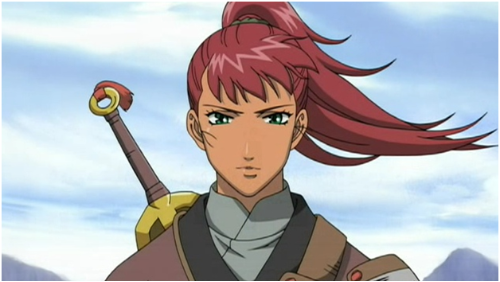 In the classic anime case of “goes from school student to savior of the land”, Youko went from Japanese student to heir to the throne when a knight magically sent her to the Twelve Kingdoms. She quickly learned that she was the heir to the throne, destined to become the Queen of Kei. This new mantle is not without its challenges but Youko proves to be a powerful ruler who rises to meet each and every challenge along the way.

From: The Familiar of Zero 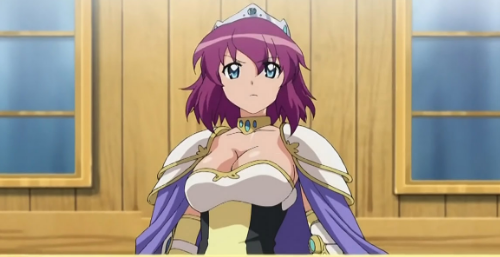 Originally introduced as the Crown Princess of Tristain, Henrietta shortly thereafter became the queen of her country when her father passed away. While she is a kind and caring individual, she also proves to be a strong leader when a neighboring country attempts to invade while she still has her queenly training wheels on. Like most of the other women in The Familiar of Zero, she is also a love interest for Saito and is more than willing to use her position as queen to try and make him hers. 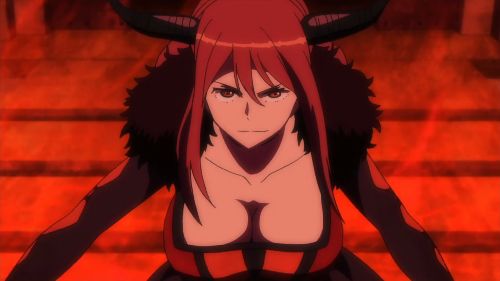 43rd ruler of the Demon World and the youngest to ever sit on their throne, Maou is a powerful and incredibly intelligent sorceress. One little problem is that the demon folk really, really like to make war and she has absolutely no battle experience. Partnering with the human hero who sought to end the war by killing her, this unlikely duo now work by manipulating both humans and demons to try and end the war before both sides destroy each other. 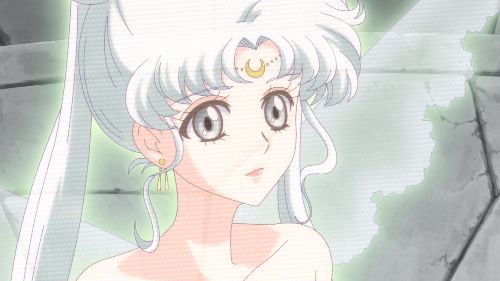 No, not that Serenity. This is Queen Serenity, the mother of Princess Serenity (aka Sailor Moon) and ruler of the Moon Kingdom. Prior to the events of Sailor Moon, she defended the Moon Kingdom from the evil forces of the Dark Kingdom led by Queen Beryl. Using practically all of her power to defeat the Dark Kingdom, Queen Serenity ultimately used the last of her strength to send the souls of her daughter and Prince Endymion to Earth, knowing that one day the Dark Kingdom would return and that the two youths would rise to the challenge of defeating them once again. 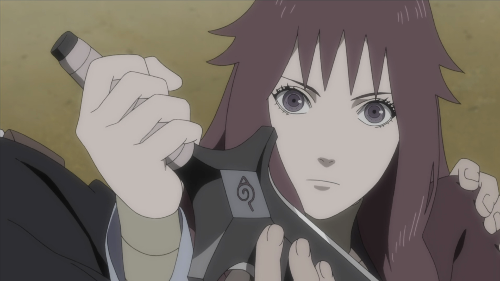 The former Queen of Roran, Saara ruled her kingdom more than 20 years prior to the start of the series. Taking up the throne after her mother’s death, Saara was unaware that she was serving as little more than a figurehead for an advisor to the throne named Anrokuzan. With the help of Naruto and several of his friends, she ultimately becomes a noble ruler who strives to protect the people of her kingdom. 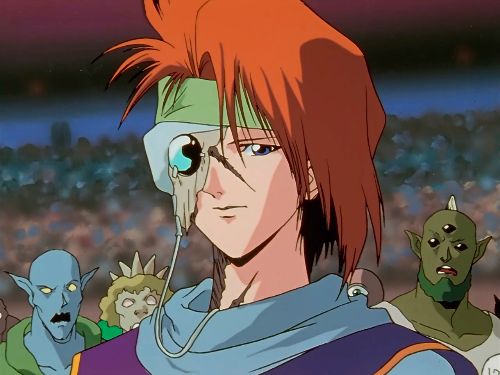 As one of the Three Kings of the Demon World, the public was a bit shocked when Mukuro publicly removed her trademark mask and revealed herself as a woman. Mukuro is an immensely powerful demon, being able to hold roughly 1/3 of the Demon World as a kingdom for centuries. She ultimately assists Yusuke in hosting the Demon World Tournament, willingly giving up her throne and putting the entire Demon World up as the prize in a battle royale. 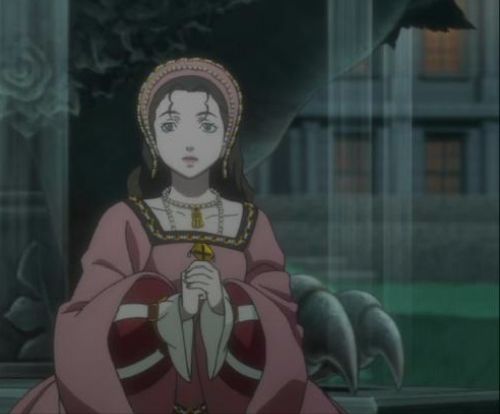 Charlotte is the step-daughter to the Queen Consort and became ruler of Midland after the death of her parents. It looked like she would be a good and noble ruler of the land…until their next-door neighbors, the kingdom of Kushan, decided to invade on her first day. Things do not go particularly well in her life but she continues to hold onto her love for Griffith, firmly believing that he will save her and help to one day reclaim her conquered kingdom. 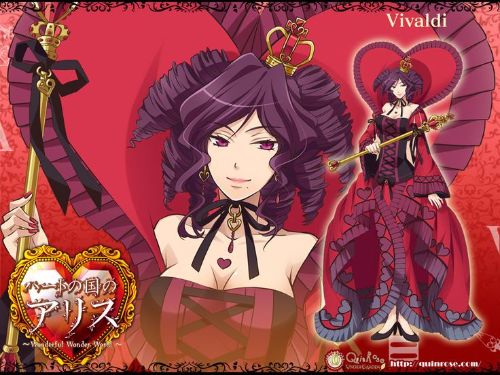 Vivaldi, also known as the Queen of Hearts, is the ruler of Wonderland. She shares many similarities with the original Queen of Hearts from author Lewis Carroll’s Alice in Wonderland, namely a tendency to behead people at the drop of a hat. But she does have her soft side as well, showing a love of stuffed animals as well as a keen fashion sense, often dressing as glamorously as possible.

From: Magi: The Labyrinth of Magic 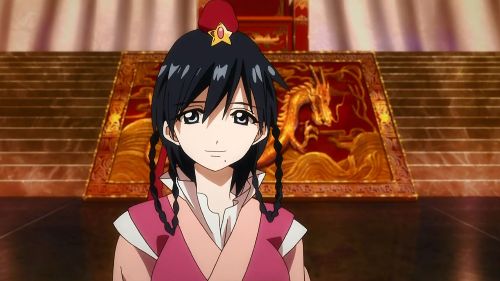 The widow of the last two Emperors of the Kou Empire, Gyokuen now rules the country as Empress Regnant. Known publicly for her beauty and gentle demeanor, that personality is a complete facade. Gyokuen is exceptionally cruel; she willing to do anything for the sake of power and is the type of person who would smile gleefully while cutting you into tiny pieces. It is hard to say that she is cold-blooded since hurting people seems to really get her heart racing. 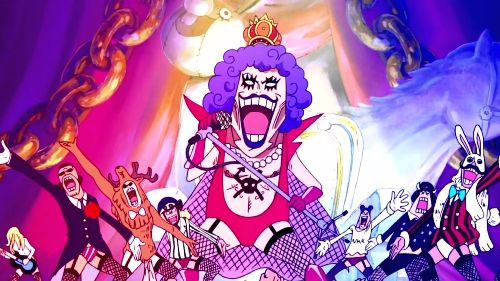 Ivankov is the Queen of Kamabakka Kingdom and before you ask, yes, is a man. His entire kingdom consists of cross dressing men. Despite this usually comical appearance, Ivankov is not always a man. His Devil Fruit power gives him the ability to control hormones, up to and including changing a person’s gender.