Ergastulum is a city of crime. Worick and Nic are two "handymen" doing various legal and less than legal jobs in this depraved city. When they take in a prostitute whose pimp they murdered, this little duo's future is irrevocably changed. 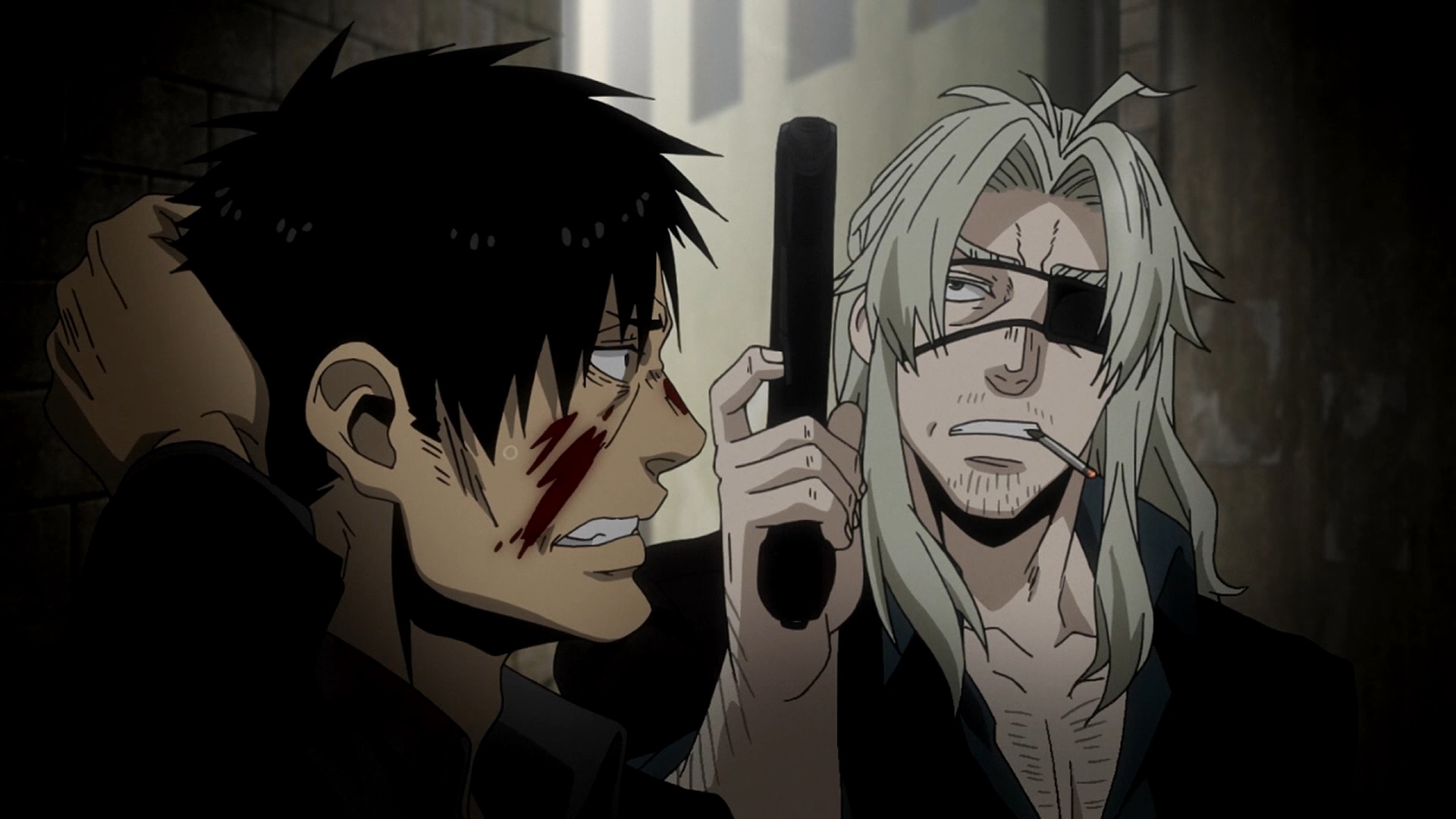 Dang it feels good to be a gangsta...

I know that's not the exact song title, but I'm trying to keep this article appropriate for all ages. But Gangsta. is a show with a good deal of sex, drugs, and violence, often all three of those at once, so it is pretty much impossible for this to be an article appropriate for all ages. In fact, if you're a sensitive sort, you probably want to stop reading here because I'm sure there is no way you can talk about a show like this without throwing around some landmine-like topics. Don't worry though, I won't curse when I talk about this anime. But if you do decide to go, I just want to inform you that it will be a real shame if you check out now because Gangsta. is a surprisingly interesting, crime-story anime for adults that I highly recommend.

Ergastulum is a city in an unnamed country. The city has a bit of an Italian vibe to it, but that is hardly definitive. In a way, its exact location is unimportant. Ergastulum is the avatar for bad neighborhoods that exist in every city. In fact the term Ergastula is what the Romans used to call prisons that hold the most dangerous slaves. The symbolism there is fairly blunt but quite expressive. 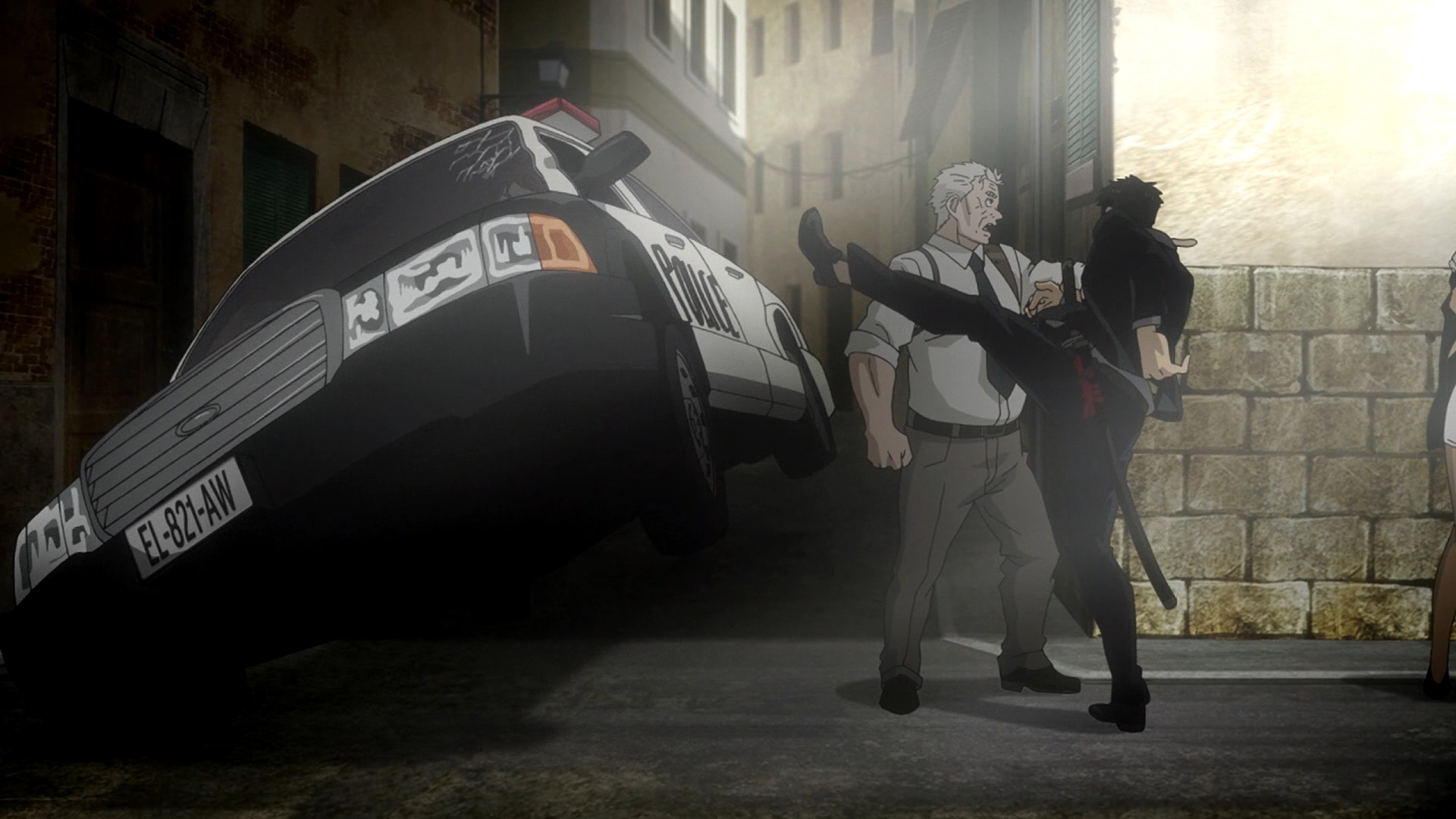 The first episode is all about world building. Nicolas is the aloof and deadly, black-haired swordsman. Worick's white hair signals a far lighter personality. While he might not be the machine of destruction that Nicolas is, Worick's charming demeanor merely hides the killer within him a bit better. We also see that they have a bit of a special situation. In a city where everyone has to pick sides, they have the luxury and precocious position of being unaligned. When the police ask them to remove a new gang that is breaking the rules, they show just how dangerous they truly are. In the process, they take in a voluptuous prostitute named Alex whose pimp they have killed. While Alex appreciates their kindness, her place in their small organization is ambiguous at best.

Alex also acts as a bit of eye candy for the male audience to balance out the fan service that the handsome Nicolas and Worick have been providing.

This all shows off what sort of city Ergastulum is. The two police officers might seem corrupt at first, but with some analysis it is clear that the crime families are the only thing that amount to any type of effective government in this city. By enforcing the laws of the syndicates, the police are able to provide Ergastulum some sort of due process and stability. That also means that murders, protection rackets, and all other sorts of illegal activity are standard practice as long as you follow the unwritten laws of the city. On a more personal level, people with dog tags, like Nicolas, are clearly some sort of elite warriors that everyone fears. Since Alex seems unaware of lots of the nuances of the high-level formal underworld, she needs to be taught this otherwise common knowledge. 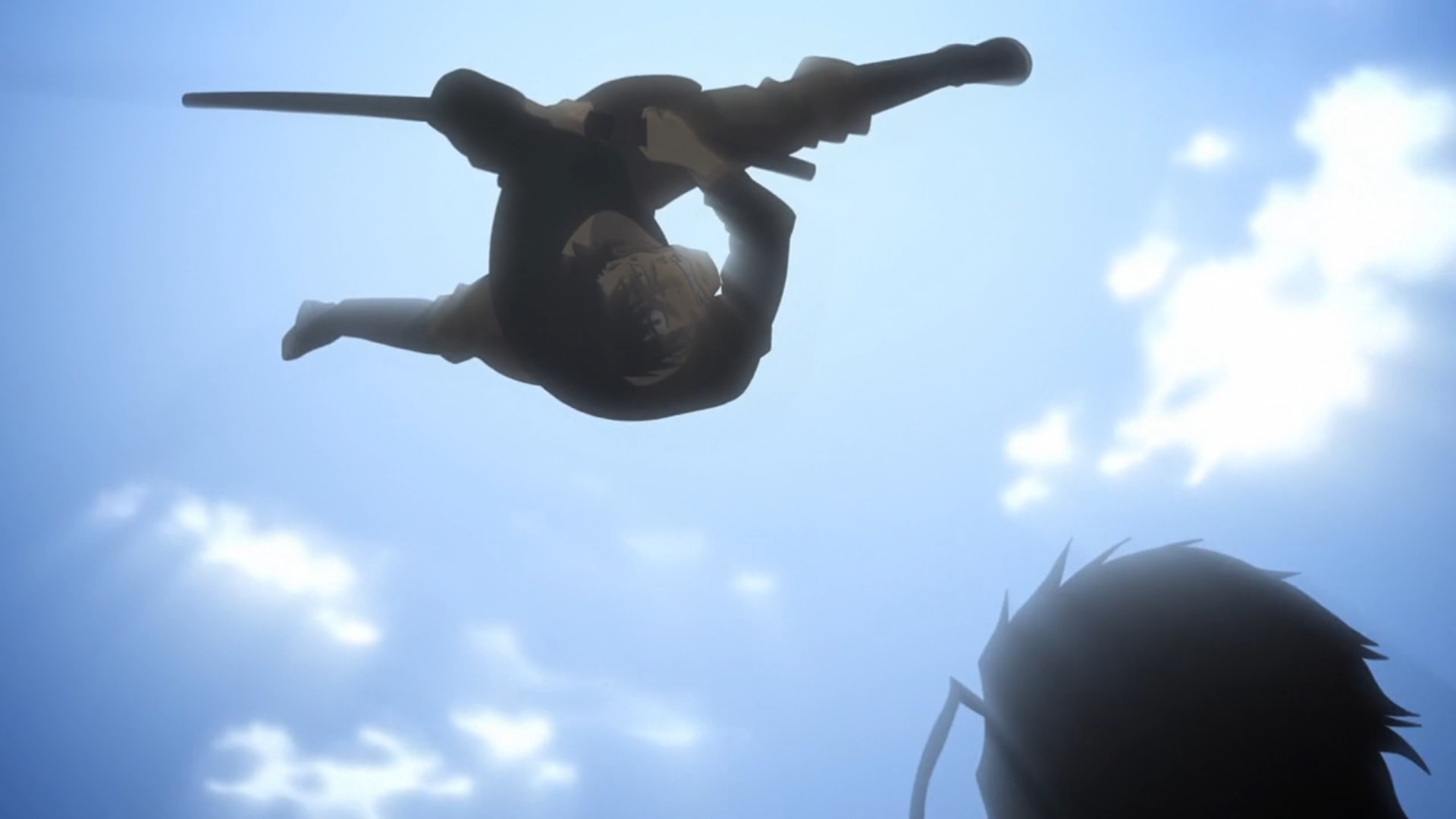 The second episode is all about Tags. When a doctor who is on friendly terms with the Handymen is being shaken down, they move in to protect him. This provides Nicolas the chance to really show off what he can do when he goes up against a fellow Tag and not just random street punks. Alex discovers that Tags are more formally known as Twilights and that they seem to be ranked as well. Both the fight and Alex's conversation with Dr. Theo show that Twilights are very dangerous and not just because of their physical power. When the Twilight that Nicolas fights is executed for failing his mission, it hints that that there are unseen organizations on the move without the knowledge of the powers that be in the city. Worst of all, their activities are centered around Tags.

It also sets up that Twilights need drugs to survive to support their monstrous power. It reminds me of Juicers in Rifts. They are warriors whose bodies are enhanced by a strange cocktail of drugs to fight on the same level as cyborgs and sorcerers, but in return, these drugs greatly reduce their lifespans and mental stability. It might be easy to pass this all off as an action anime but I think that would sell the premise short. While Gangsta. does use some of the more standard power-level tropes of tournament-fighting shows, it is also clear that this anime has a much darker bent to it. Think of it as a way of being more accessible to the masses, as it draws them into a more mature, storytelling scene.

The first two episodes draw an immediate comparison with shows like Black Lagoon and Jormungand. All three are series about criminals that you root for mostly because the people they are in conflict with are far worse, which is amusing because these heroes would be dastardly villains in any other series. The Handymen are charming and have a sense of honor but it is a dark and twisted version of kindness, justice, and fair play. Nicolas and Worick are bewitching enough to be the heroes of their story but the show never lets you forget the violence inherent in their characters that is always lying just beneath the surface ready to come out and consume anything and anyone (friend or foe) that stands in their way. 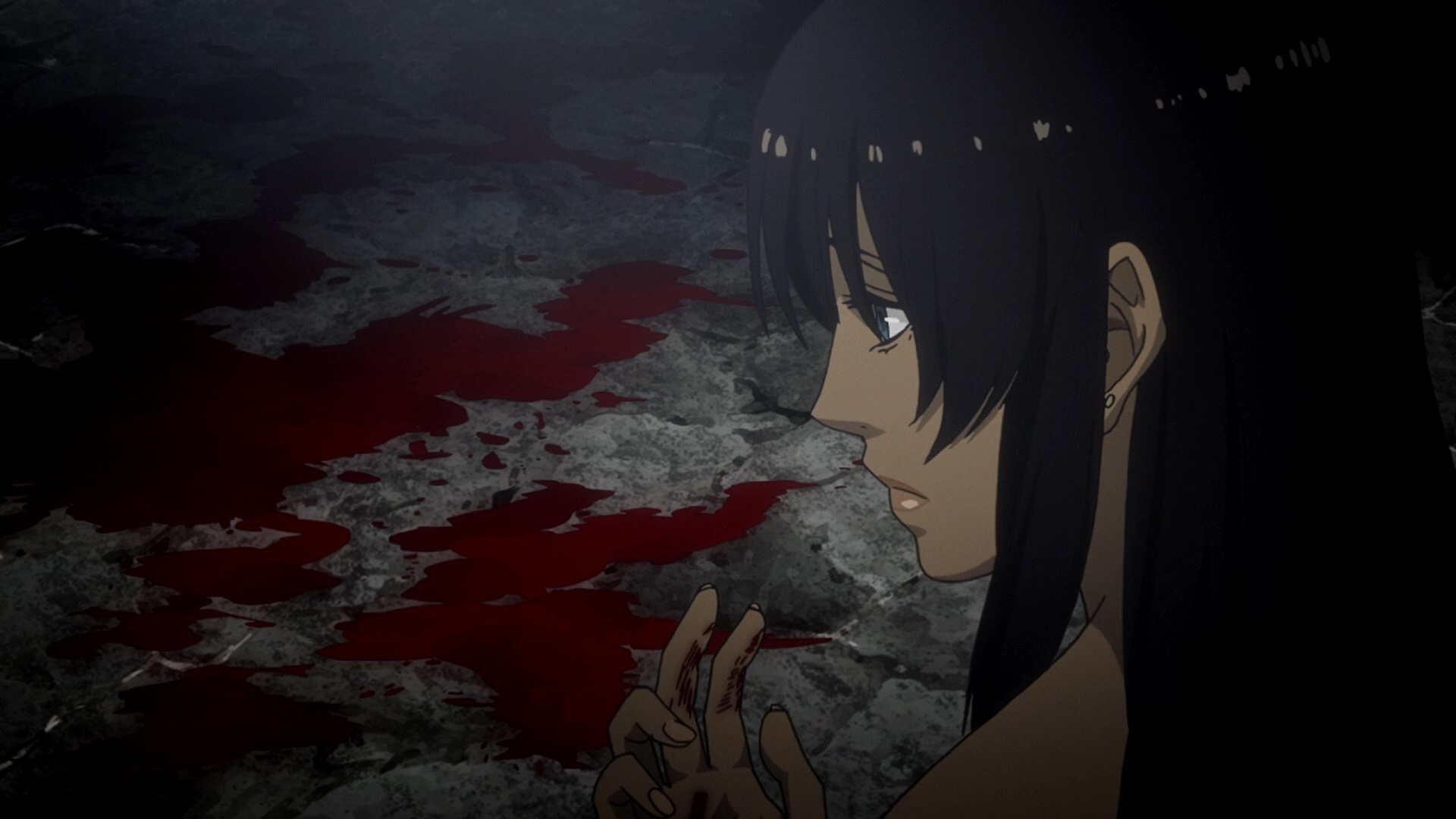 Having not read the manga, everything seems to be heading towards some sort of less than happy ending. It is one of those series where if everyone dies in the end, as proof that the circle of violence leads to naught, I would hardly be surprised. I'm betting that either Nicolas or Worick will die by the end of the series. Alex has the best chance of surviving, if for nothing else because she is the audience surrogate character. It would seem that when her story ends, so does the story as a whole. If she dies it will probably be in the finale.

Theoretically all three could make it through the series but that would surprise me more than any other ending.

If you have seen these episodes you know I have very deliberately not mentioned something. When I discuss the next two episodes I will bring up that fact. I know this has a spoiler tag but there are some surprises that work best when they unfold before your eyes. I think this is one such case. It's similar to the reveal in The Sixth Sense. Having the twist revealed to you won't ruin the story but it will take away a bit of the joy of discovery.