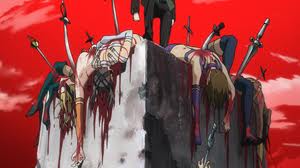 Why do some people like watching gory scenes in anime? Can you say that they are somewhat twisted? Different folks have different reasons for watching some of the goriest, bloodiest, and most violent anime known to men. Some watch them because of the art, the storyline, the test of courage they provide, or something else. WARNING: These anime are not for someone with a faint heart.

The story of Elfen Lied revolves around prejudice, social alienation, abuse, jealousy, revenge, and other ugly things that would drive anyone, human or not, to do unimaginable things. Aside from the excellent plot, the viewers should also expect a lot of nausea-inducing scenes from one of the goriest, bloodiest, and most violent anime.

In Hellsing, a British task force plays the important role of annihilating threats in the form of vampires, ghouls, and other supernatural beings. It doesn’t take a genius to know that these evil beings always choose to give their victims macabre deaths, and on the other hand, their crimes come with the gruesome deliverance of justice.

This series is well-known for its nudity and scenes with life-like carnage. This series takes place during Edo Era at the time when people enjoyed a peaceful co-existence. In competitive matches, the participants always use wooden swords. But, this time the leader chose real swords. It’s a tale of conflict, strange fortunes, and interlacing fates.

Gantz has an intriguing story with an equally fascinating, dark artstyle. All sorts of characters gather together in creating a stimulating and captivating anime series. This anime is certainly not for younger viewers or those who are not fond of gore and violence. But, anime fans searching for the goriest, bloodiest, and most violent anime around would find this one a masterpiece.

Shingeki no Kyojin Female Titan Devoured by the Titans

The Titans are merciless, gigantic humanoids that devour humans, seemingly as their source of sustenance or perhaps even without particular reason. The mammoth walls which separate the city of the humans and the land of the Titans come crumbling down when a Colossal Titan breaks it. The blissful and peaceful existence of the humans ceases to exist as they become prey to the Titans once more.

Akira takes place in Neo-Tokyo in the year 2019 when the entire city must live with anti-government terrorism, gang violence, and teenagers with terrifying psychic powers. Some may look at it as something not as bloody as the goriest, bloodiest, and most violent anime of today, but it has stomach-turning scenes that could suddenly creep into your memory and haunt you anytime, anywhere.

Juubee Ninpuuchou: Ryuuhougyoku-hen (Ninja Scroll)
This anime is one of the best classic ninja anime ever created, with its superb animation and all the bloody and gory scenes that one expects from an anime with lots of sword fights. What makes this anime more interesting is the deep story that will keep viewers on the edge of their seats.

Deadman Wonderland Ep 1)
This series is one of the goriest, bloodiest, and most violent anime, and it gets more horrific as the main character Ganta must go through the endless cycle of nightmarish encounter in the place called Deadman Wonderland.

Higurashi no Naku Koro ni Keiichi Kills Mion and Rena
An ordinary high school boy named Keiichi Maebara transfers to Hinamizawa. Keiichi thinks it’s a small and peaceful rural village, and he becomes friends with a group of nice girls. Everything seems perfect, until gruesome events begin occurring one after another – there is no escape.

Blood-C The Gory Parts
Saya is a good-natured, geeky girl who practically lives a dual life: peaceful and clumsy school girl by day, and ferocious monster slayer by night. The monsters are merciless as they tear the humans to pieces and practically paint the town with blood. Dare to see it and find out why it should occupy a spot on the list of the goriest, bloodiest, and most violent anime.

Berserk Berserk Violence Clip
A mercenary that goes by the name Guts knows only one way to survive in the harsh world he lives in: fight and always win in the brutal combats of life and death. Expect bloodshed, gore, and violence in inconceivable amounts whenever a battle of survival occurs.

Corpse Party started off as a video game and ended as one of the goriest, bloodiest, and most violent anime ever created. The nightmarish party begins when the new Kisaragi Academy builds their school on the cursed grounds of the closed Heavenly Host School, which had a dark, ghastly history. Before going home, a group of unsuspecting students from Kisaragi perform a charm that’s supposed to strengthen their friendship. What comes next is a horrifying realization that they are transported to an alternate dimension where the Heavenly Host School still exists and ghosts of the murdered students lurk the blood-stained hallways with the ominous intent of taking more souls to join the party of the dead.

Of all the goriest, bloodiest, and most violent anime to date, Gynocyber probably tops the list. It is famous for its controversial content and extreme graphic violence. It features countless dismembered bodies, brutal killings, and other nauseating events.

Don’t be mistaken, the mentioned anime in this article are just some of the goriest anime around. Also worth mentioning are Highschool of the Dead, Devilman, Violence Jack, and The Urotsuki. Don’t wrongly judge an anime fan for liking the gore, blood, and violence in anime: perhaps it’s about time to see with your own eyes to see what the hype is all about.