When it comes to romcoms, sooner or later the "com" will always take a back seat to the "rom" - and that's how it was on this week's Jitsu wa Watashi wa! But don't worry, there was still plenty of humor to tide us over. 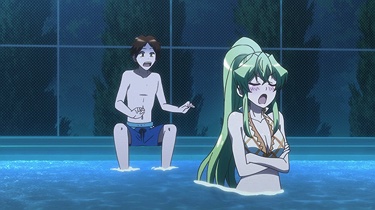 Well, I kept saying all Jitsu wa Watashi wa needed was a catgirl to complete the 90's vibe, but I didn't exactly expect it to take the form it did. Not that I'm complaining, mind you... 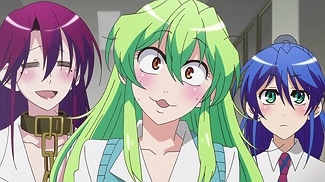 The thing about romantic comedies is that unless you can fundamentally like the main couple and root for them, they can't totally work the way they're intended to. Sure, one or the other of the principals (usually the female lead) is often overshadowed by one of the circle of friends (I do think Nagisa is the best female character here, but Youko more than holds her own in the cute and funny department), but you still have to be in the main couple's corner to get the full experience. 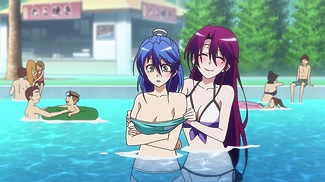 While Jitsu wa Watashi wa never forgets the Hippocratic Oath of comedies, sooner or later it was always going to come back to Asahi and Youko. And happily, while they're both idiots they're pretty darn lovable idiots, so they can carry the load of an episode like this one. It's hard to get too mad ad Youko for being too tense to realize Asahi's feelings because that denseness is basically who she is as a person. And Asahi has shown some actual development as a character, to the point where he was even able to ask Youko out on a solo date this week. 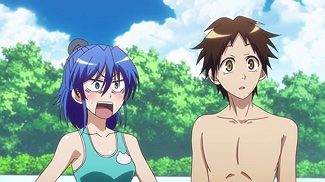 Hands up if you thought that would actually happen - this is still anime after all - but it's the effort that counts. It's not like we can realistically expect anything truly groundbreaking from a pool ep at this point unless the series is Mitsudomoe, but this one was very entertaining. There were some big laughs, but no doubt the real purpose here was to get Youko and Asahi together in a "date-like" situation. 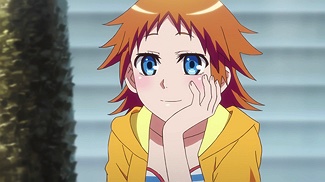 The gag here is that Youko can't swim and Asahi has pretended he can't either so as to convince her to come to the water park, and Shiho and Nagisa end up as the swimming instructors. Shiho is her usual trollish self and Nagisa can never quite hide how much it kills her to support Asahi and Youko (that she still does is one reason why I love her as a character) but both of them are pretty much cheerleaders here. Heck, even Mikan - who shows up at the park with her two little brothers - seems to be pulling for Asahi by now. 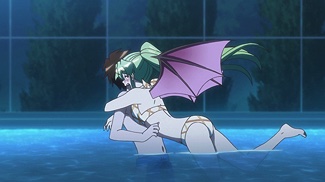 Not content with several hours of practice at the park (that sunscreen must be really waterproof) Youko invites Asahi to join her in sneaking into the pool at school for illicit night swimming. Is history repeating itself here? It is if Principal Akane-chan is to be believed - and in fact, Youko lets her inhibitions slip and calls Asahi by his first name (it's impossible for non-Japanese to appreciate just how socially significant that is in Japan, I think). 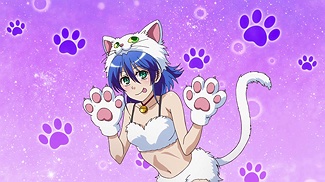 That's a huge step in any anime relationship so maybe there's hope for this one after all. For on week at least, all signs point to "yes". Though if Nagisa actually shows up in that catgirl swimsuit, all bets are off...