The past few months have seen some interesting new entries in two of the biggest long-running real robot mecha franchises in the form of Macross Δ (Delta) and Mobile Suit Gundam Thunderbolt, and with them, another set of interpretations on the ace pilot archetype that long predates both franchises. With that in mind, I thought it would be interesting to take a look at how these modern depictions compare to the men who originally inspired the archetype. 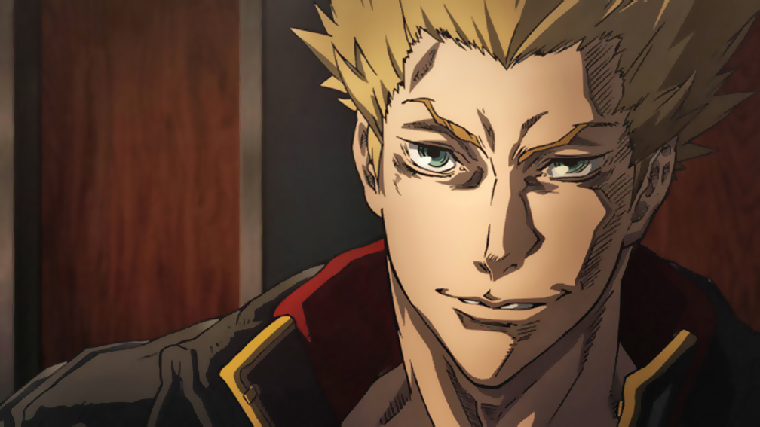 On the one hand, we have Thunderbolt’s Io Fleming. Unlike most Gundam pilots, he is no pacifist; a thrill-seeking mad dog who loves nothing more than jazz, combat and mobile suits, Io is largely unconcerned about the welfare of himself and his enemies, occupied instead with crushing his opponents using the power of the Gundam. He's a highly skilled, combat-addicted adrenaline junkie with little else to speak of personality wise. Though we’re shown inklings of something more in his interactions with his allies and a fistful of flashbacks, it’s not explored in much detail. But perhaps that’s just as well for an action-packed 60 minute spectacle where the plot doesn’t get in the way of the giant robot fights. 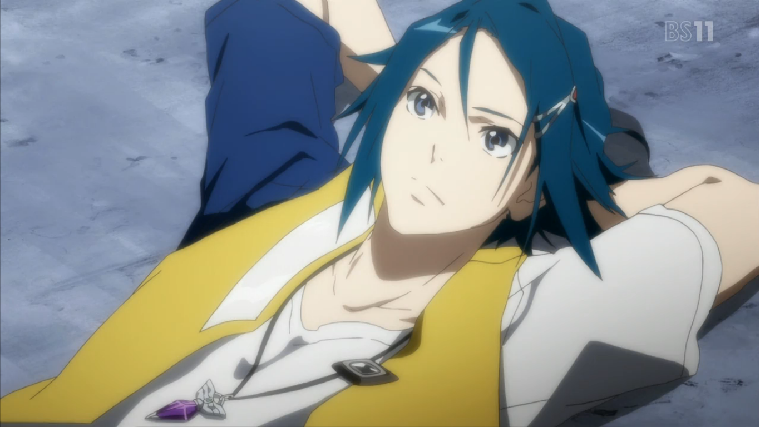 And then, we have Delta’s Hayate Immelmann. Technically he’s not an ace yet, but nevertheless he has enough piloting skill to attract the attention of Delta Squad. In contrast, Hayate doesn't like war, killing, or the military… nor does he particularly care about following orders or punctuality, to the chagrin of his superiors. He more or less does what he wants with little concern for others and, 5 episodes in, mostly gets away with it, facing few consequences to date for his actions (or lack thereof) and general carefree attitude.

To what extent do these characters draw upon historical figures? One would think not much, because both personalities are completely insufferable and could not possibly exist in a real military.

The whole point of boot camp is to break a recruit down and rebuild them into a soldier who is conditioned to unquestioningly and unhesitatingly follow orders; It’s hard to imagine somebody such as Hayate, who blatantly and unflinchingly ignores orders (and stands up his commanding officer’s judo class) would survive boot camp and avoid discharge/court martial long enough to rack up any sort of reputation worth having.

Likewise, a pilot who eschews teamwork and lives only for the thrill of war seems deliberately endowed with exaggerated characteristics for the purpose of entertainment. Real militaries emphasize teamwork and lone wolves are frowned upon. In addition, Thunderbolt goes to great lengths to hammer in the gruesome horror of war. It’s hard to believe somebody like Io, who often sees the grisly results of his work up close, could still be so addicted to war. 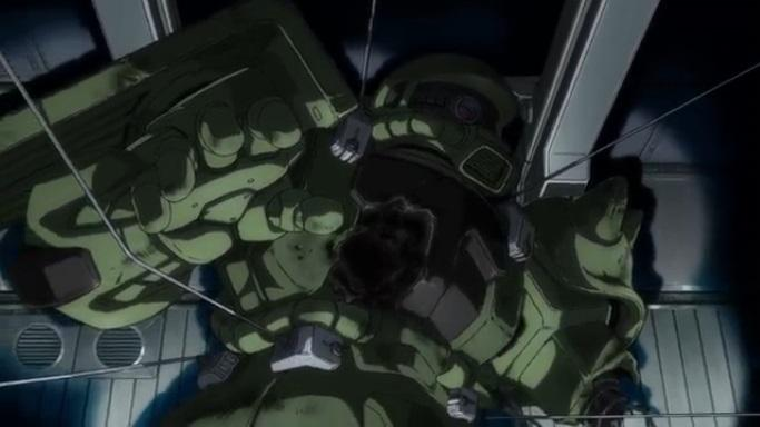 A wrecked Zaku from the One Year War. The fate of it's pilot, though unknown, was probably not a happy one.

Neither character would appear to have much basis in reality aside from the classic stereotypes: a big ego (they say the difference between a fighter pilot and God is that God doesn’t think he’s a fighter pilot) and mad flying skills.

Sometimes, reality is not as realistic as we might think. The following comes from a military signal about a certain Flight Lieutenant who “indulged in low flying”:

“... two pilots were up flying Tiger Moths and [The Flight Lieutenant] beat up the aerodrome and the dispersal huts. On landing he was placed under arrest with the intention of a court martial. Owing to a technicality the case was dropped and he is being transferred to another squadron for punishment. He states that he cannot guarantee he will not repeat this performance.”

Such blatant defiance in the face of authority is not what one would probably expect from a real flying officer. Referring to the same pilot, another report states:

“This officer was in the habit of criticizing the flying abilities of his squadron commander and the wing leader. He made little attempt to cooperate with them and would not pull his weight in his own squadron.”

Starting to sound at least a little familiar yet? This pilot was also in the news:

“GERMANS ARE BEATEN, ‘NO FUN ANYMORE’”

“The inactivity over there was getting me down. We never hunt the Huns anymore. They’ve lost all their spirit. As soon as we spot one during or regular sweeps over the Channel, occupied France, Holland or Belgium, he dives away and stays away. There’s no fun anymore. You can’t shoot down Huns if they don’t show up, can you?” 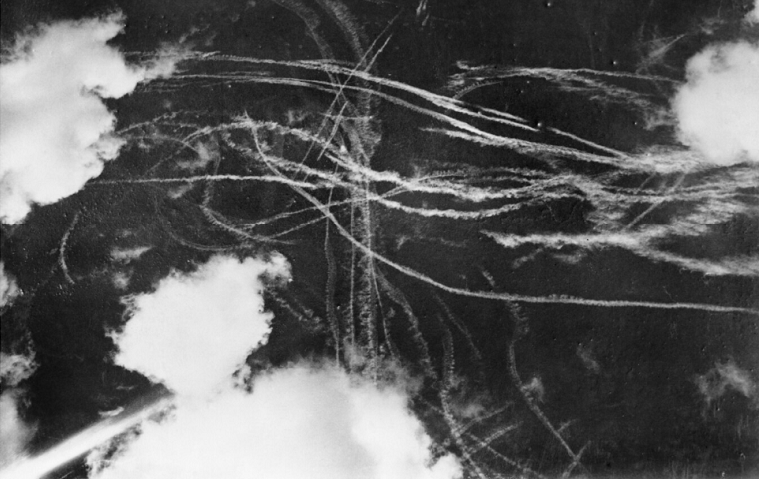 Contrails left by aircraft during a dogfight in the Battle of Britain. Such engagements became less common by 1944. Image source.

Sounds a lot like something a certain Gundam pilot might say to the media. This maverick pilot's commander goes on to elaborate:

“[The Flight Lieutenant] is only interested in flying. The Service is a vehicle by which he can get his flying. He told me this quite frankly. He does not feel indebted to the RCAF in any way. At the present time he is interested only in one thing, and that is to get out into the Pacific area. If he does not get things the way he wants them, he suggests his resigning and transfer to the American Air Force.”

Note that both above comments are from May 1944, when the pilot in question was serving in the RCAF. Although it's never outright stated, it's clear that neither Io nor Hayate feel much loyalty or responsibility to their respective employers either. In much the same way as this pilot, they're only in it to fly for their own sake. One final quote, this is what he thinks about night fighting:

“It's a wonderful show! Best on earth! Lights, red, green and yellow from the shells, red strings of flame, 'onions,' they call them, like great yellow fingers - aircraft caught in the searchlights - aircraft falling in flames, flaming pieces falling off and being caught by the wind! Oh, Mom, it's really great! When they drop their incendiaries they just cover the whole island, it's like liquid hot metal, one big solid mass. You see high explosives hit the aircraft and explode in a deep red glow! And you're up there too sometimes your own anti-aircraft guns pick you up and cut loose. Once I was up at night looking for Junkers bombers and I saw shells curving up and then turning and coining toward me. I thought they were firing at a Junkers, but then I realized they were firing at me! They thought I was a Jerry! I radioed down to quit it and they radioed back, 'Okay.'

Oh, it's terrific, and wonderful! I wish I was back there this minute!” 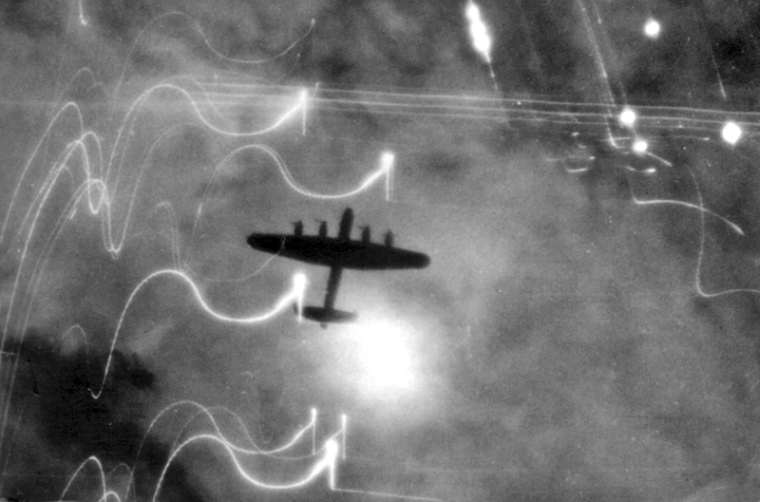 A bomber on a night raid over Hamburg. Image source.

Note that halfway through this spirited telling, he got up out of bed, despite the shrapnel wounds in his leg from being shot down. Almost doesn't sound real, does it? So, who is this Flight Lieutenant, and how was he allowed to remain in the military?

He’s George Beurling, and he wasn't discharged because his score of 31 victories makes him Canada’s highest scoring ace of the Second World War and one of the top 10 Allied pilots of the war. His reputation as a highly skilled pilot was earned by shooting down 27 aircraft in 14 flying days over the besieged Mediterranean island of Malta. 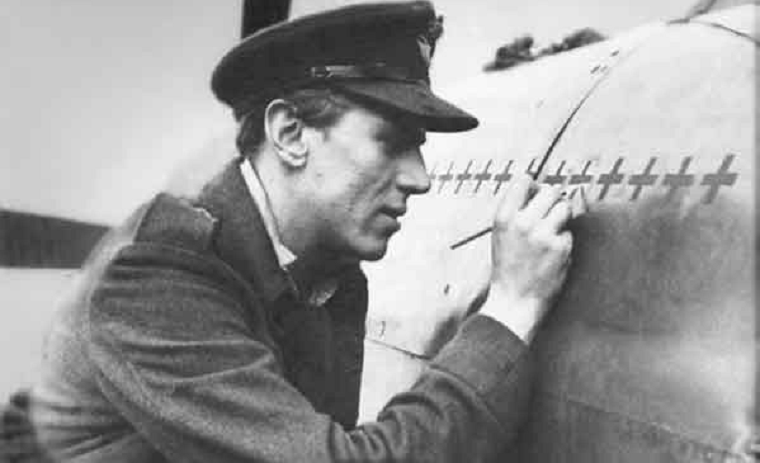 In Beurling we see Hayate’s disdain for authority whenever their wishes do not intersect with his desires. Just as Beurling views the Air Force as simply an avenue to indulge in aerial combat, Hayate makes it clear that he only joins Delta Squad for the chance to fly, and doesn't care much for their mission (though this is perhaps changing as of episode 5). Both are also known to engage in stunting and despite orders not to, mostly get away with it. In Beurling we also see Io’s single-minded addiction to combat, a deep-seated love of a thrill nothing else can replace, despite knowing full well the horrors of war (Beurling was shot down multiple times and lost several friends in Malta).

Although Hayate and Io aren’t directly based off Beurling (he didn't taunt his opponents, wander from job to job prior to his military service or have a rivalry with any particular axis pilot), it is interesting that the more outlandish, unbelievable behavior exhibited by those two not only has a basis in reality, but is very similar to some of Beurling’s actions. Perhaps we shouldn't think of such things as unrealistic, or be so surprised that pilots back then acted the way they did. 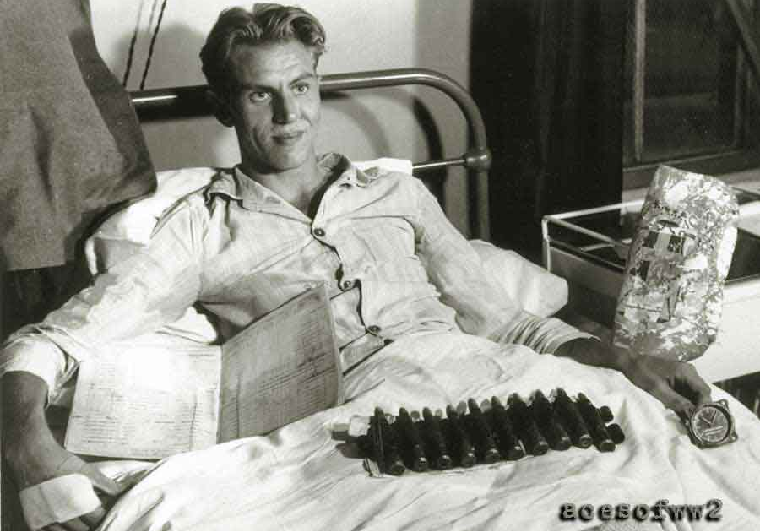 Beurling in the hospital after his transport crashed near Gibraltar en route back to Britain. Image source.

It’s not clear if the creators of these shows knew about Beurling or were inspired/influenced by accounts of his actions, but you're certainly less likely to hear a modern air force pilot say such things in the media today. Indeed, pilots today in general do not command such visible presences as pilots did back then. Most people at least know of The Red Baron, and perhaps fans of Macross will recognize names like Ihlefeld or Mölders, but how many could name any fighter pilots from the last few decades?

We've largely stopped putting pilots on pedestals and the US military at least is very careful about its image nowadays. You wouldn't expect to see a pilot talk like Beurling in the news today, yet both of his above quotes were published in newspapers/magazines of the day. Raw, unfiltered accounts such as Generation Kill are now the exception rather than the norm. But this shows that the military does change and perhaps Beurling's behavior would not be tolerated today. Still, I believe that in certain ways, soldiers today are not so different from soldiers back then. When it comes to these ace pilot characters, perhaps fiction is not so fictional after all; we just think it is because we don't know what reality is actually like. Indeed as Mark Twain said, "Reality is often stranger than fiction, because fiction has to be believable." 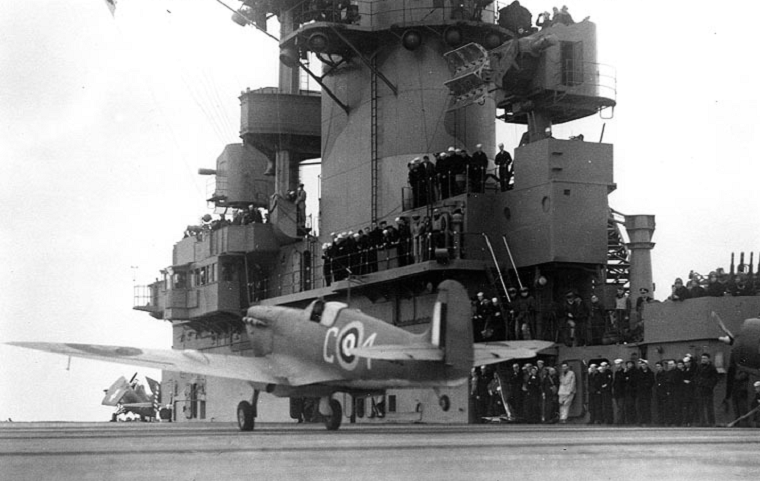 A Spitfire V similar to the one Beurling flew takes off from USS Wasp bound for Malta, 1942. Image source.

For more information on George Beurling, as well as the source of the above quotations, click here.