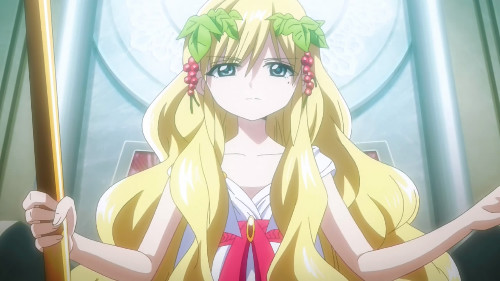 Many Magi characters come from the legendary Middle Eastern collection of stories, One Thousand and One Arabian Nights. These stories are famously told by master storyteller Scheherazade, to her husband the king. Every night, the king planned to kill her the following day, so every night Scheherazade ended her story at a cliff-hanger and managed to prolong her life.

Scheherazade actually makes an appearance in the second season, Magi: The Kingdom of Magic, as a character who guides the story behind the scenes - which is definitely a fitting positiong for her to be in.

Although the Thousand and One Nights characters get somewhat of a makeover and a bit of role shuffling, turning peasants into kings and brothers into friends, their backstories remain essentially the same… usually. 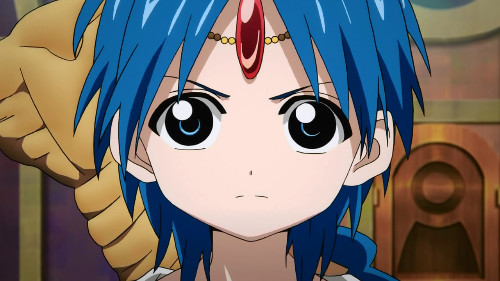 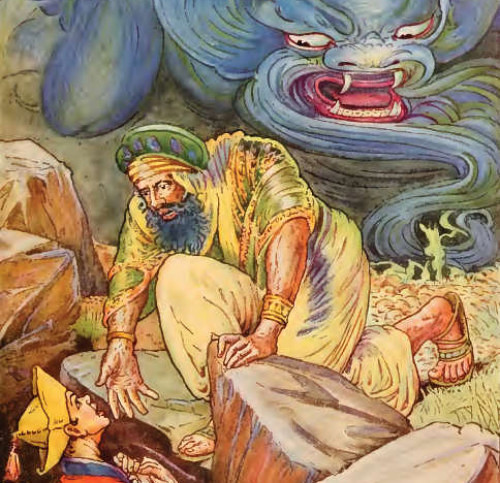 You may know the name Aladdin thanks to the Disney movie, where he was a turban-wearing, magic carpet riding young man. Magi took got its inspiration for Aladdin from the same original story, which appeared in the Thousand and One Arabian Nights stories.

In both the anime and the story, Aladdin gets his hands on a magic lamp, which gives him access to a magical genie (although he’s possibly only blue in the anime and Disney adaptation). Unlike in the anime, Aladdin uses his genie to crash a wedding and marry the woman instead, then build her a magnificent castle.

This is where the story seems to split. Despite being one of the most famous tales from Arabian Nights, Aladdin may actually not have come from the original stories. It's an "orphan tale" - there is no manuscript of Aladdin and it was most likely added to the collection in the 18th century by a French translator, who had heard it from a storyteller in the Middle East. (The same may be true for Ali Baba and Sinbad's stories as well.) In fact, Aladdin was actually a Chinese boy and the story is set in the Far East, not the Middle East. How's that for messing with your image of the story!

The lack of a manuscript to refer back to is probably why no one seems to agree on the ending. In some versions, Aladdin outsmarts the evil sorcerers who seek his power. In others, Aladdin manages to take out one sorcerer but is killed by the other. In any case, the Aladdin from Magi is just another retelling of a beloved and constantly shifting story. 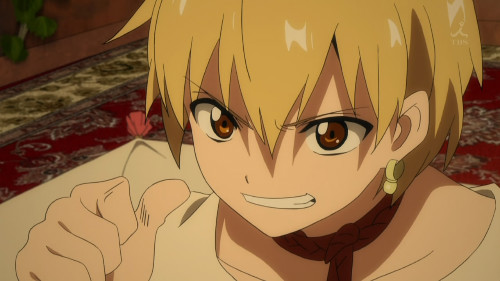 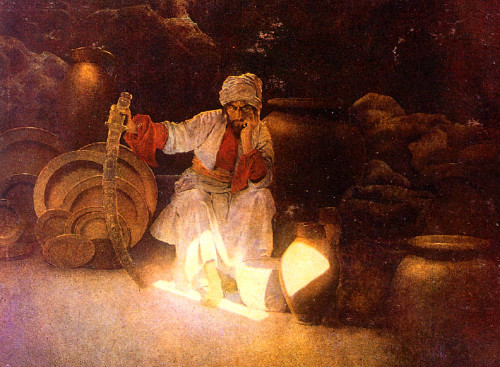 Another character from Arabian Nights, Alibaba, or Ali Baba as he’s known in the story, is a merchant’s son. Many of the Magi characters show up in some form in Ali Baba’s origin story, which you may know as the one that gives us the phrase “Open Sesame.”

As the story goes, one day Ali Baba discovers a group of thieves and their secret hideout. He learns how to get in and out of the hideout, and steals only a little bit of their wealth every time he visits. Enter Cassim, Ali Baba’s brother (and not just childhood friend as Magi portrays him). Ever the troublemaker, in both the story and the anime, Cassim finds out his brother’s secret and tries to steal as much as he can carry from the thieves. In his excitement he forgets how to get out of the hideout, is found by the thieves, and killed. Ali Baba retrieves his brother’s body.

The story doesn’t end there, though. When Cassim’s body vanishes, the thieves realize someone else knows about their hideout, and go out in search of Ali Baba. That’s when the real hero of the story shines: 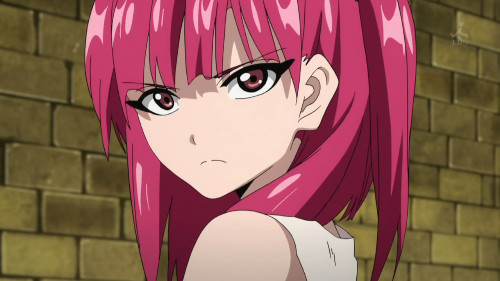 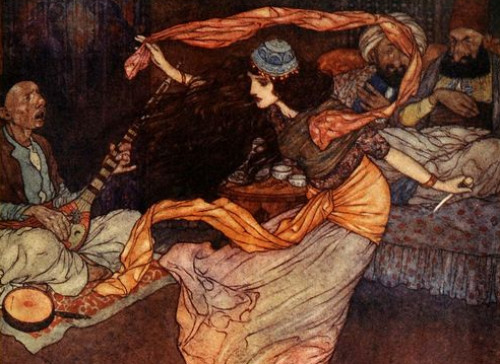 The anime Magi's version of Morgiana is an extremely powerful girl who lives the life of a slave until she breaks away from the chains with sheer power and force of will. Morgiana makes an appearance in Ali Baba’s origin story, and completely steals the spotlight.

Morgiana starts out as a cunning slave girl in mythological Cassim's household. In the 1,001 Nights tale, Ali Baba trusts her to help him move Cassim’s body, and it’s a trust well-placed, because she manages to save him, over and over again. The thieves keep sending out scouts and marking Ali Baba’s house so they can come back and kill him. But each time, Morgiana manages to outsmart the thieves by marking many other houses in the same way.

Finally, she manages to kill all 37 remaining thieves, and, a short while later, their leader too. Using boiling oil. For her troubles, she’s rewarded with freedom, and Ali Baba’s hand in ma- no wait, his son’s hand in marriage. Sorry, Ali Baba / Morgiana shippers. 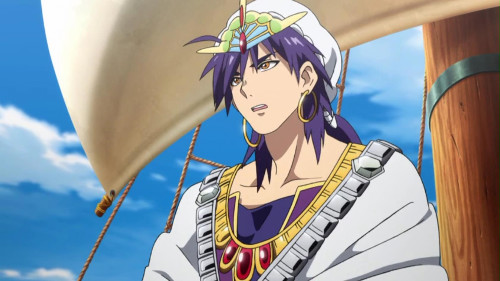 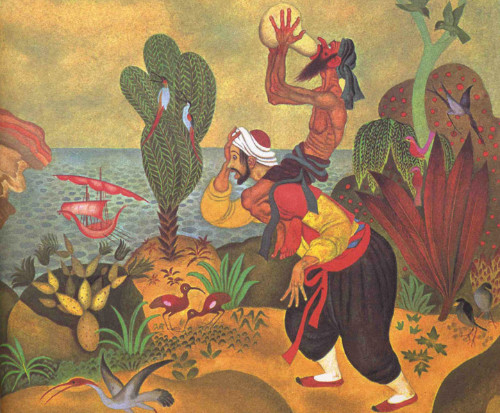 As awesome as all the Magi characters are, Sinbad is hands down the most badass. Sinbad the Sailor, as he’s known in Middle Eastern legends and myth, goes on seven epic voyages through and around Africa and Asia. Along his adventures he visits magical lands, encounters monsters, and has a ridiculous string of misfortunes.

You’d assume that Sinbad the Sailor is an expert sailor, but he seems to crash more ships than he sails. Every voyage ends with him shipwrecked, with someone trying to eat him or kill him. After everything Sinbad has seen and been through, it’s no wonder the anime made him out to be one of the wisest characters in the show. 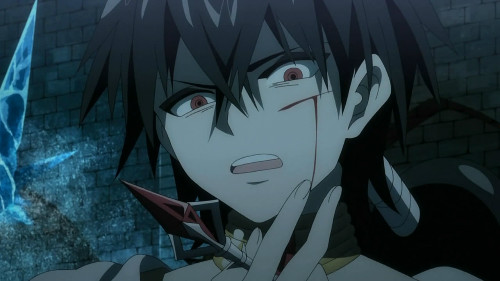 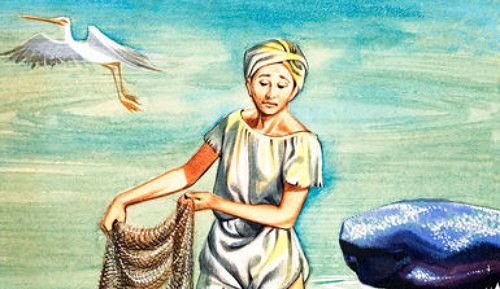 Poor Judar is just constantly used and abused. In the anime, Judar plays the role of someone whose heart has grown dark because of his past. In the anime, this turns him into a childish and arrogant man, and someone who holds a deep grudge for those who took advantage of him.

The mythological character Judar comes from a story in Arabian Nights, but his character there was almost entirely the opposite from his anime portrayal in Magi. In the story, Judar has two wicked brothers who continuously do terrible things to him and their mother. Yet no matter what they do, how many things they steal from him, how many times they betray their mother and leave her for dead, Judar just can’t seem to hold a grudge against them. He forgives them every single time.

Judar goes on a series of quests and trials on his adventures. Judar drowns two men because they asked him to, goes looking for a treasure only he can open, lets monsters bite at him and fighters draw their weapons at him, and even has to force an apparition of his mother to undress.

By staying true to himself, and pure of heart, the mythological Judar ends up with power, wealth, and a wonderful wife. His brothers… not so much. As soon as Judar forgives them yet again, one brother poisons Judar, kills the other brother, and takes Judar’s wife as his own. There’s no happy endings for Judar, but that’s okay. He would probably just forgive his brother for this too.