You'd have to be soulless to call an exorcist on these anime ghost girls! 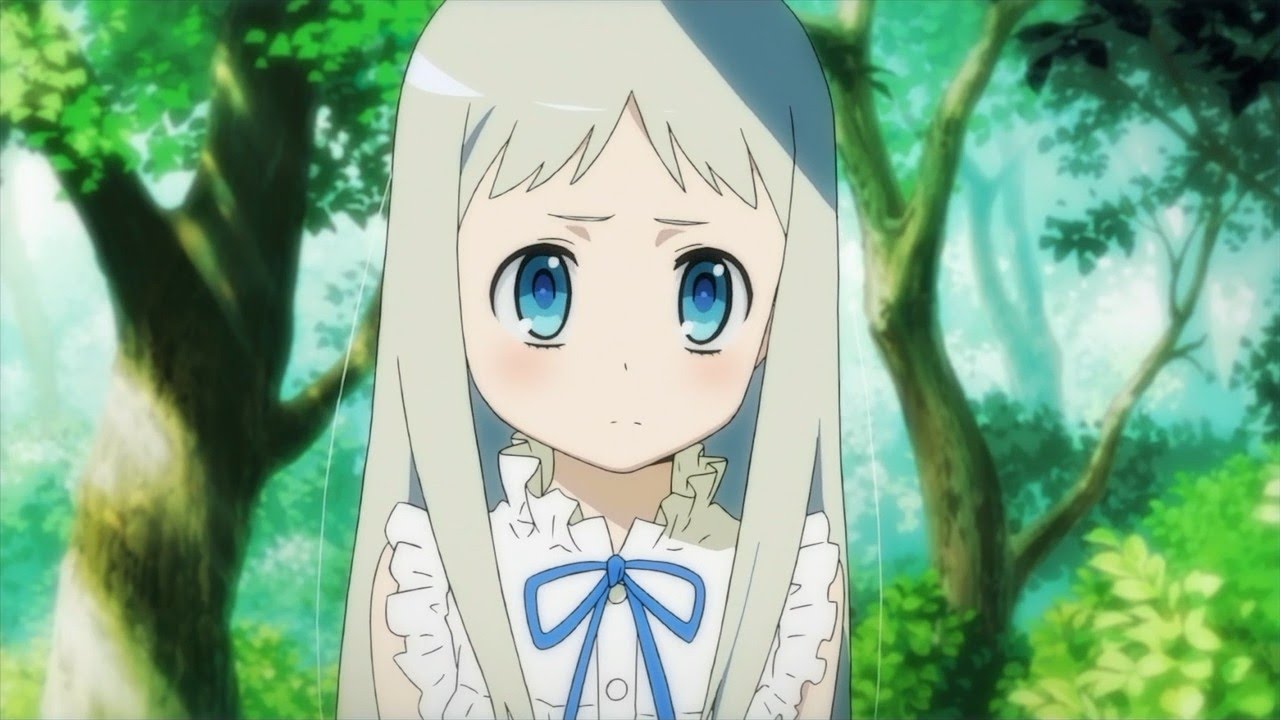 Ghosts are most often associated with fear and terror, primarily since the tales of yurei (ghosts in Japanese) spread like wildfire in the past. Anime, being one of the major forms of modern media, is also responsible for telling tales of the dreaded, vengeful specters that haunt and prey on the living until they are laid to rest. But what about cute anime ghost girls?

Yes, this list will showcase fifteen cute anime ghost girls that manage to retain their lovable nature despite having met an untimely end, and who are more likely to give you a heart attack from their saccharine smiles than out of fright. Note that ghost in the context of this list can also include astral projections, spiritual entities, and disembodied souls—as long as they have spent a significant amount of time in that state and can pass as a ghost, they fit the requirements. As per usual, there will also be only one representative per anime and the order of the list is the personal opinion of the writer. 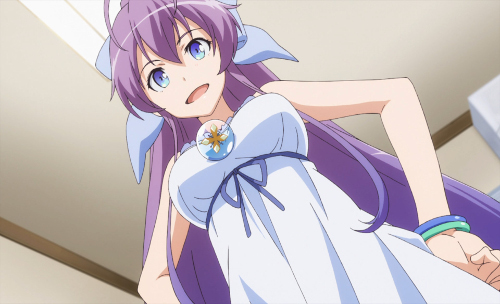 Nanana was once an adventurous girl who believed the modern world was lacking in excitement, and therefore decided to go out and explore ruins along with her friends. This group of kids would later create an artificial island that specialized in giving students the skills they needed to achieve their dreams. Unfortunately, Nanana was later stabbed in the back and killed in her own apartment room—leaving her ghost bound to it. Even after death, Nanana still holds her head high, enjoying pudding, playing games, and helping anyone that comes to her with one of her collection—magical artifacts that she gathered from all over the world that are now scattered over the island.

But what makes Nanana such a cute anime ghost is that, despite her knowledge, skills, and personality, you can tell she still feels lonely. The world around her continues to move while she remains trapped in her room, bound by a tragic death that remains unsolved to this day. Yet she puts on her best face for her roommate, Juugo, who sees through it all and wants to solve the mystery so that she can move on. 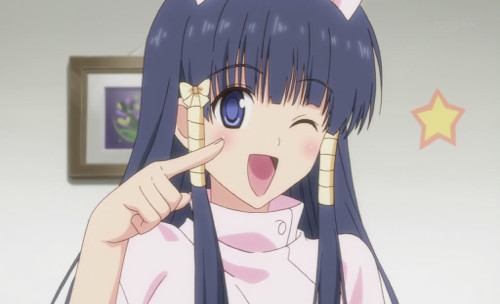 Haunting her old school building for the 400 years following her death, Shizu is eventually discovered by Rito and his friends, given a synthetic body by the school nurse to work as her assistant, and becomes more involved with the harem hijinks that abound in the series. Though mostly harmless, she also possesses poltergeist-like abilities that usually manifest when she experiences moments of stress—like encountering even the most friendliest of dogs due to a deep-rooted fear of them. 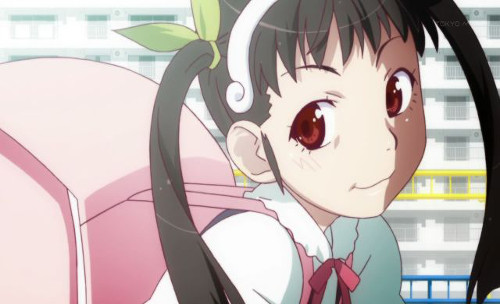 Mayoi is the ghost of a small schoolgirl who died on the way to her mother’s home over a decade ago. Unaware that she died, Mayoi continues searching for her mother’s home, to no avail, until Koyomi stumbles across her. Though she pushes him away at first, they become close after he helps her find her way and frees her to become a wandering spirit. 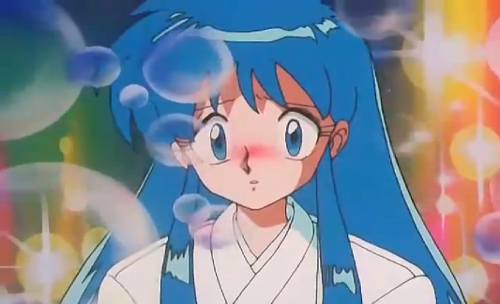 Kinu Himuro is the resident ghost girl of Ghost Sweeper GS Mikami, one of many spirits haunting Japan due to overcrowding. Having died a few centuries ago as a sacrifice to appease a volcano in order to stop it from erupting, she remains stuck on the mountain and causes trouble until confronted by Reiko and Tadao. She then begins to work for Reiko in order to pay her way into heaven (she doesn’t remember how to get there on her own after so long) and slowly begins to fall for Tadao.

From: Higurashi no Naku Koro ni Kai (When They Cry: Kai) 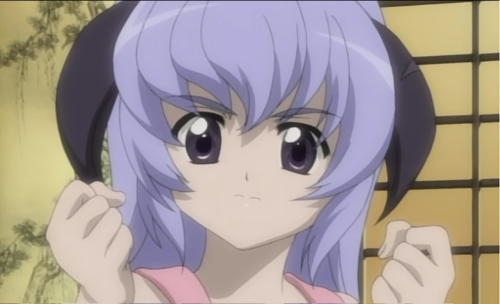 Next on our entry list of adorably cute anime ghost girls is Hanyuu. She serves as the ghostly advisor of Rika and has been by her side since Rika was young, acting as a mentor. Being one of the two who are keenly aware of the temporal shenanigans in the story, she spends her time working on a way to resolve the matters personally for Rika and her friends.

From: Kamisama no Inai Nichiyoubi (Sunday Without God) 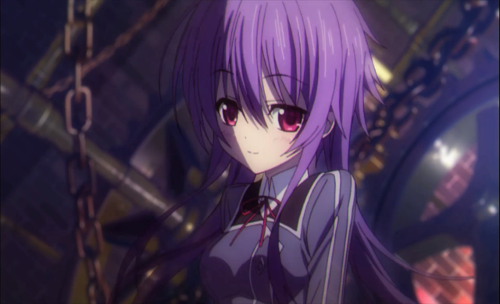 Dee Ensy is a supporting character in the Sunday Without God anime and the next entrant on the list. In a world where God has vanished 15 years ago, no new life can be born, and the dead walk on the surface, Dee has a rather cheerful and friendly nature. She travels alongside her close friend Alice, who she naturally has a romantic inclination towards and will do whatever it takes to keep him alive. 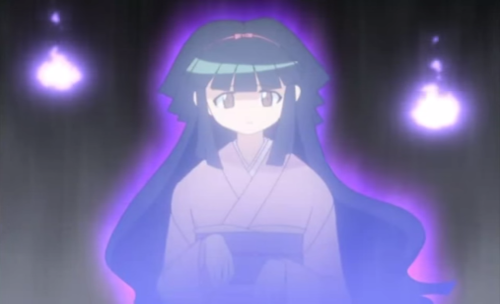 Omiyo is the ghost of a seemingly young girl haunting the basement of the Hinata household. She actually died around the age of 90 and chooses to look as she did when she was saved by a Kappa, in the hopes that he would recognize her if he returned. She ends up mistaking Keroro for the Kappa several hundred years later, leaving her upset that he forgot her until the misunderstanding is cleared up.

From: Otome wa Boku ni Koishiteru (Otoboku: Maidens are Falling for Me) 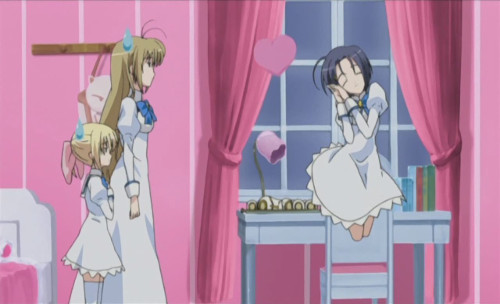 Ichiko is the "lively" ghost of a girl who died 22 years ago. While alive, she learned that a female upperclassman of hers (that she was in love with) was getting married upon graduation. So she snuck out of the hospital where she was receiving treatment and waited in her room to speak with her a final time, but died before she could. Since then, she haunts the room that Mizuho starts living in, and they quickly build a rapport upon learning that said upperclassman is his mother. 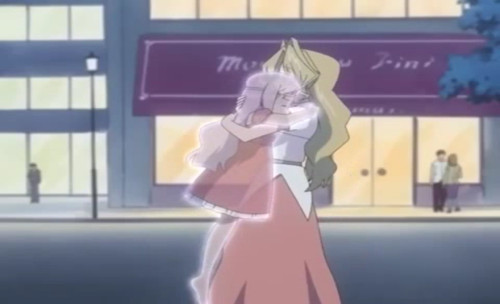 Next on the list is Elizabeth from Maburaho, the ghost of a noble girl that lives in a mansion situated between the boys and girls dorm of the school. Events spin out of control when Kuriko’s family tries to force her away, and a supercharged spell from Kazuki leaves her deciding to stay with Kuriko, due to her resemblance to someone she knew in the past. Since then she endeavors to help her adoptive mother with her schemes involving Kazuki and lives within the confines of her breasts (yes, really). 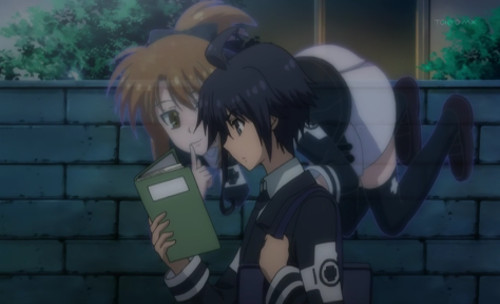 Misao is the cute anime ghost girl that haunts her best friend, Tomoharu Natsume. She remains surprisingly upbeat given her condition, and the romantic feelings she harbors for him allow her to become the power-source for Tomoharu to use his Ashura Machina without fear of the consequences, as long as she can help him. 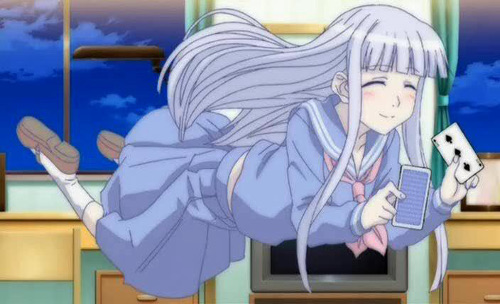 Sayo Aisaka is a student of Negi Springfield who has been in the same seat in the class for several decades after her death. Lonely from being unnoticed and desperate for friends, she eventually gets them as the young mage makes her classmates aware of her presence. From that point on, she partners with Kazumi who serves as her new best friend. 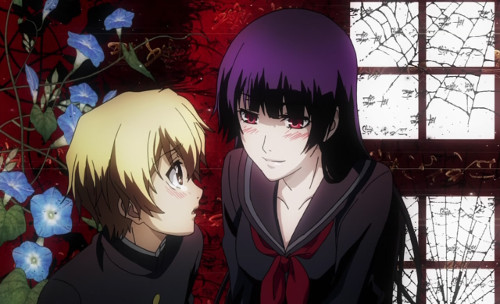 A teenage girl that haunts an old school building, Yuuko has no recollection of her past or how she died several decades ago. However, upon meeting Teiichi, who possesses the ability to see her as she truly is, they form a paranormal investigation club to look into her death and unravel the truth. As the secrets come out, she gradually finds herself becoming more and more enamored with Teiichi. 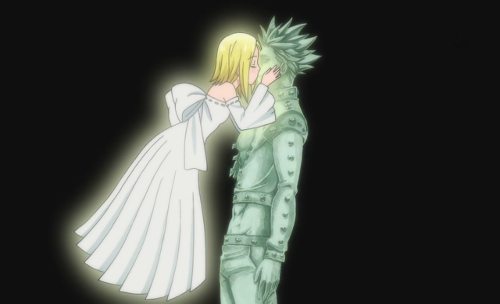 Elaine is the former guardian of the fairy forest after her brother, King, disappeared several hundred years ago, as well as the lover of Ban. She is killed when a demon attacks her home and she bestows Ban with immortality, but her soul watches him from the world of the dead. Their tragic love—due to her being dead and him being immortal—for one another is obvious when she undoes her brother's attempt to petrify Ban, who vows to find a way to bring her back to life, a motive that drives his actions later in the anime. 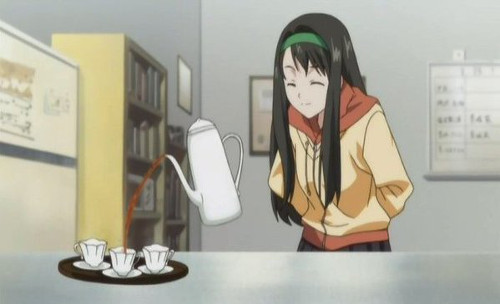 Manami is the ghost of a young woman who was on the verge of being eaten by a soul eater and saved by Itsuki. After that, with no memory of her past and nowhere to go, she joins his group as an apprentice and helps out, occasionally in a maid outfit. Being a ghost, she possesses poltergeist-like abilities (which she uses to beat a necromancer with a tombstone in one memorable episode) and her gratitude to Itsuki eventually sprouts into romantic feelings.

From: Ano Hi Mita Hana no Namae wo Bokutachi wa Mada Shiranai (anohana: The Flower We Saw That Day) 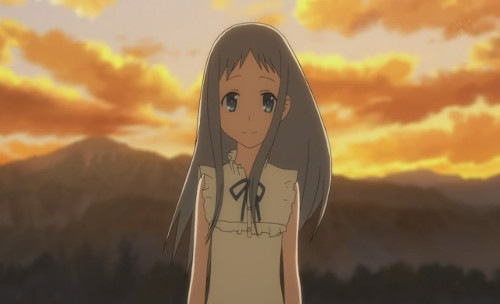 Meiko Honma (or Menma for short) is a young ghost girl that drowned five years ago, a tragedy that broke apart a group of friends, as they suffered from the immense guilt and heartbreak. However, her ghost still lingers and beckons Jinta to bring the group back together, so that she can have her wish fulfilled. When looking at her kind and cheerful nature throughout the anime, it’s easy to see just why her friends were crushed at her death and you can’t help but want to see to it that she accomplishes what she hopes to, so that she can be happy.

Cute magical girls may appeal to some people, but there's nothing hotter than a mature and elegant woman who has mastered the ways of magic. We'll be counting down ten of the hottest witches in anime, with only one woman being selected per anime.