Meaning and Origin of Fujoshi 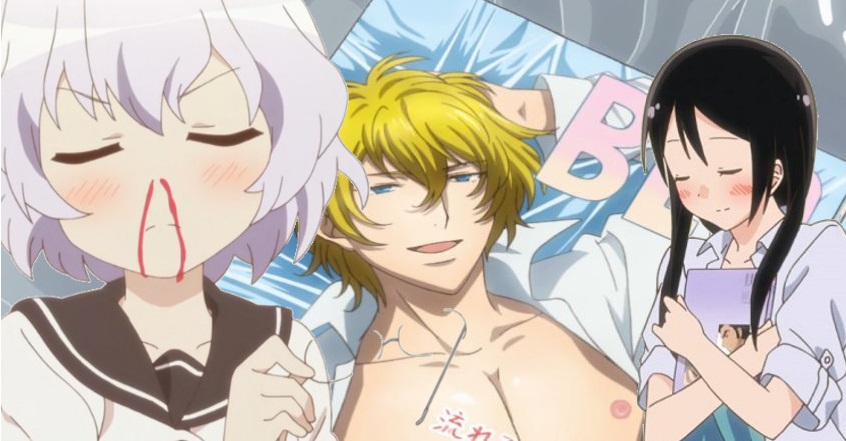 Fujoshi literally means 'rotten girl', and humorously refers to women who who like to read BL/shonen-ai (or yaoi) fiction.

It is often used in a self-deprecating manner to refer to one's own 'impure' thoughts when fantasizing over BL fiction. Fujoshi also often like shipping men - in real life or otherwise - together. The same word, fujoshi, also means respectable lady (though written using different kanji) thus it is also a kind of otaku in-joke.

It is thought that the first appearance of the word, on the online message board 2channel, was used to refer to people who like to imagine or "ship" male-on-male romantic and sexual relationships between fictional characters, celebrities, or people they know, even when the relationship is not canon or even remotely possible. It wasn't until later that fujoshi came to refer to girls who read works specifically written about homosexual relationships.

This term created by the girls themselves on otaku forums, mocking their own 'rotten thoughts'. This then goes hand in hand with enjoying the genre of yaoi or boys' love manga, anime and games. Here again, definitions become very important. Boys' love (or BL) is akin to shounen ai, these are both sub-genres of shoujo with generally really hot guy characters with obviously deep bonds, but nothing romantic or sexual is ever actually explicitly shown. Yaoi is distinct as it is far more explicit in its content, but these three are often entangled, especially in the West. Many fujoshi don't tend to dabble too much in world of the imagined, but are rather simply fans of the genre.

Erika from Durarara!! is a perfect example, the giggling fangirl at the prospect of Shizuo and Izaya being the '#1 couple of Ikebukuro'. 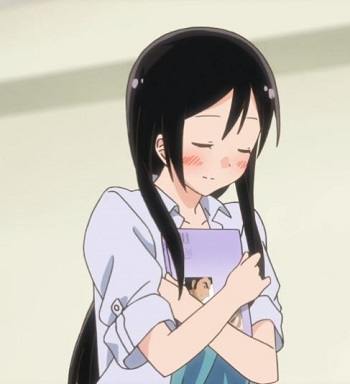 The overwhelming majority―up to 80%―of yaoi fans and creators are female, most of them heterosexual. There is a small male readership, who are referred to as fudanshi ('rotten boy'). As the art style of most yaoi media tends to be feminine, this may be somewhat off-putting to male readers.

Also there is a genre more focused to a gay male audience, called Bara, and includes more realistic depictions of homosexual relationships (especially dealing with the homophobia in Japan), whereas yaoi tends to be very idealistic and beautiful.

For more on the differences between the genres and for some recommendations, see this great article.

Misuse and the Rise of the Bishounen

Fujoshi is commonly misused (especially from outside the otaku fandom) to mean any otaku who happens to be female. This can cause an outcry from two camps: female otakus that aren't into yaoi, and fujoshi that don't consider themselves otakus. It also comes with a double sting, suggesting that a girl otaku is somehow rotten, and has been used in this way by male otakus, among others.

There has been a recent change in the anime world, one that appears to have been thoroughly embraced by creators, but not so by the old guard of the fandom. This is not only due to the rise of the yaoi and BL genre, but the increase of attractive men in mainstream anime. Some series even actively try to create moments that can easily lead to fantasies for fujoshi, as creators have caught on that women can be a very loyal audience.

They also now have massive spending power, and were previously a mostly untapped market. Some people are disinclined to change, and have loudly voiced their resentment. One way of doing this was make the term fujoshi an insult.

Portrayal of Fujoshi in Anime 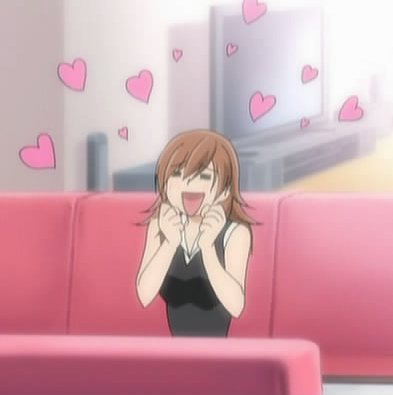 Fujoshi characters are finding their way into anime, but somewhat slower than their proliferation in the real world. Some hypothesize that this lack of fujoshi in anime is due to the fact that fujoshi don't align too well with an idealized moe view of the world, thus the majority of the male audience would not consider them lovable or attractive.

When a fujoshi is present, they tend to be in anime aimed at girls, and she will often not be portrayed well. This can be illustrated with the examples in this article. Renge, the ever dedicated fujoshi (pictured above) surrounded by her fellow fangirls is a character in Ouran Koukou Host Club, a reverse harem with a dash of shounen ai that sits comfortably in the shoujo demographic. Although beloved by the viewers, it is made obvious that the other characters think she is more than slightly insane.

To the right is Aikawa, Usagi's editor from Junjou Romantica. She's a big fan of his BL work, even making suggestions and pushing Usagi to write more daring scenes. Even though this is a yaoi anime itself (it's often thought of as the archetypal yaoi anime, in fact) and thoroughly aimed at females, Aikawa is still cast in rather a bad light despite her obvious hard work and is described by Usagi as a 'devil'.

Erika from Durarara!! is an exception, although it has a wide demographic it is generally aimed at males. Erika has a couple of serious fujoshi moments, but she is also a hard-core general otaku, and this is mainly what she is remembered for. In fact her main fangirl scene ends with this reaction from the gang:

Can't even be a fujoshi around your fanatical best friends. Shame.

The rise of fujoshi and the popularity of yaoi can be very confusing from a western perspective. Prevailing wisdom says girls love romance, and surely they want to fantasize about themselves with the characters they like. This may be true in some respects and for some girls, but social change is always reflected in popular culture.

Women in Japan can often still be expected to give up their career when they get married and start families (70% of women leave work after their first child), so if you want to have a career, it has to come first. Many girls find even thinking about heterosexual romance as an unwanted distraction, as they know they can't have it until they are ready to give up their work. Many are also painfully aware of all the dangers of engaging in romance if they aren't ready for marriage: the rumors, the pressure, the potential accidental pregnancy. They don't want to be reminded of this in the books they read for pleasure, or in the games they play.

A survey in 2013 from the Japan Family Planning Association found 45% of women asked answered that they were 'not interested in or despised sexual contact'. The answer: yaoi. A safe world of romance, one where none of the painful reality of relationships can even touch. But this is a very philosophical and in-depth view, and can't be the only reason for rise in popularity of yaoi, as it has been embraced all around the world. Yaoi-Con is held in San Francisco, after all. But similar sentiments of not being treated fairly at work are a universal headache for women, so while many may just view it as two hot guys for the price of one, there is definitely something very socially unique behind the world-wide love of yaoi.

So, like many labels, fujoshi can be something to cling to, something to which you feel like you can belong. And this is made even worse by the fact it is a place to find the fulfillment they are barred from enjoying in the traditional areas of romance. When this safe place is misused and twisted, it can feel like a very personal ordeal.