In the wonderful world of anime, a good pair of glasses is an irresistible fashions statement. Glasses on a male character often denote a cultured, cool, and collected nature. Their signature pose is probably them adjusting their glasses, looking pensive all the while. This archetype is known as the megane danshi, or "glasses guy". Like the meganekko, or "glasses girl," (which you can read all about here) the megane danshi is almost always an aloof and attractive intellectual. The person below that image may be sweet, shy, or even sadistic. Their glasses can be stylish, cool, or nerdy and unfashionable. Let's take a look under the hood at these ladykillers in lenses!

All member favorites stats are taken on the date of publication.

Here are 15 of the popular anime boys and guys with glasses!

Vash the Stampede from Trigun 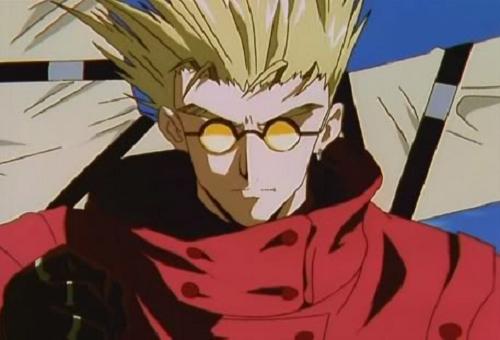 With a 60-billion-double-dollar bounty for his capture or death, Vash the Stampede is the most wanted outlaw on the planet Gunsmoke. Odd, considering Vash is a strict pacifist. To counter his reputation as a walking nexus of destruction, Vash deliberately affects a goofy persona: that of a harmless womanizer with a soft spot for children and a constant craving for donuts. But when the situation calls for it, Vash is a force to be reckoned with, capable of superhuman agility and aim. Like Trigun itself, Vash's glasses are an older style. When his glasses turn shiny, that's an enemy's cue to run. One power of the megane danshi is to become terrifying when his glasses hide his eyes, and Vash has the highest body count of any of them...purely by accident, of course. 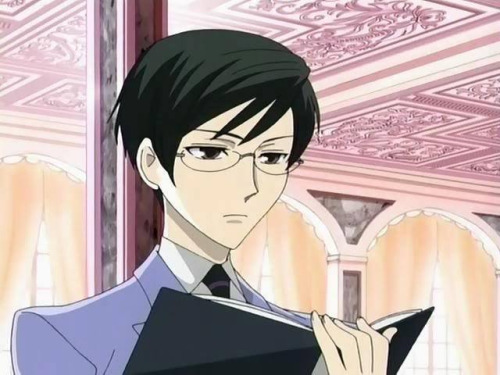 Slender, debonair, and calculating, Kyouya Ootori is the true brains of Ouran Academy's Host Club. Club president Tamaki Suou is Kyouya's best friend, and Kyouya spends most of his time masterminding fundraising schemes to support Tamaki's whims and keep the extravagant club running. His sly, behind-the-scenes operations have earned him the nickname "Shadow King". Yet not even Kyouya can always be perfectly composed. He values his sleep and is the polar opposite of a morning person, which explains his other nickname: "Low Blood Pressure Lord". 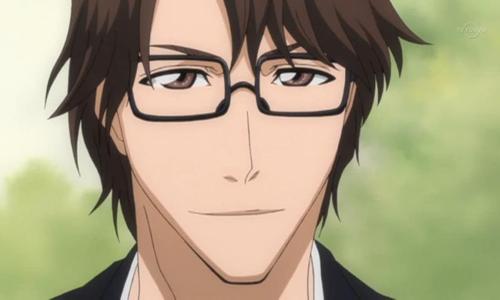 A career military man, Sousuke Aizen is one of the Soul Society's greatest warriors. By his introduction in the anime, he has become the captain of the Fifth Division, one of thirteen organizations dedicated to guiding the dead to the afterlife. Regardless of the situation, Aizen radiates tranquility; he prides himself on his tactical and analytical genius, both of which enable him to make small talk even under threat of death. He's even a guest lecturer on calligraphy when he's not working his day job. A skilled soldier and a cultural connoisseur, Sousuke Aizen is everything a glasses guy should aspire to be. 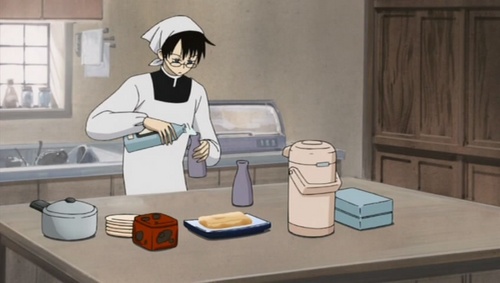 Watanuki is quiet, slender, and an excellent cook. He crushes on his classmate Himawari, but like all glasses guys is too shy to tell her outright. He has a short temper, but who wouldn't when you're living with people like Yuuko and Doumeki, constantly demanding more food or sake! The creators of xxxHOLIC, CLAMP, have compared Watanuki to Nobita from Doraemon, the quintessential glasses-wearing dweeb character. 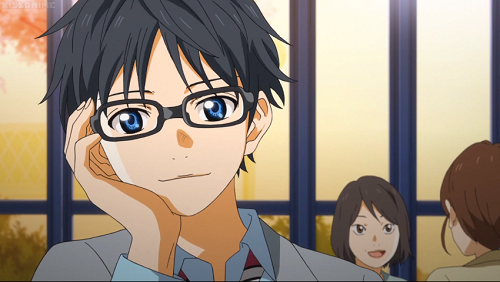 Another child genius with family trauma, Kousei is not a karuta player, but a talented pianist. Shigatsu's female protagonist Kaori helps Arima regain his love for piano. Arima has worn glasses ever since he was very young, and childhood photos of him as a cute kid with large thick-rimmed frames shows the other side of a megane danshi's charm. If his glasses don't make you swoon, his talent sure will! 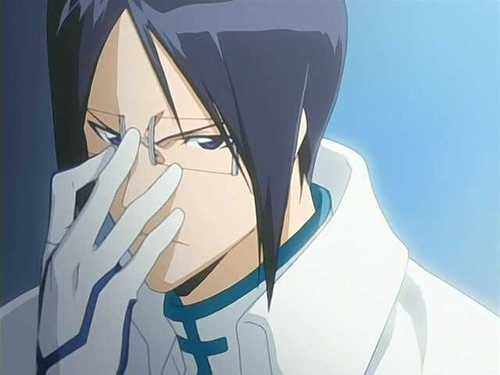 Everyone's favorite Quincy, Uryuu is probably the definitive glasses wearing character of Bleach, even more so than his more popular co-cast Aizen. Like Kyouya, he also suffers from low blood pressure. Surprisingly, Uryuu is great at sewing, and is a good homemaker. He's shy and quiet, two characteristics you'll see many times going down this list. But when provoked, he has quite the fiesty temper. 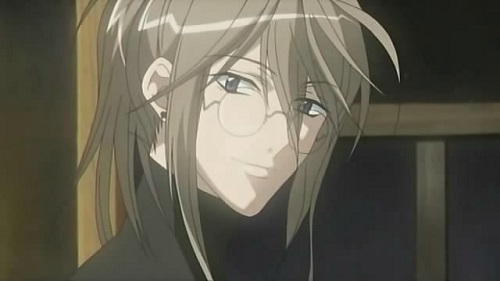 In the world of Loveless, Soubi is what's known as a "Fighter"—a warrior assigned to protect a colleague known as a "Sacrifice." After the death of his Sacrifice, Soubi's contract transfers to 12-year-old Ritsuka, the younger brother of the deceased. Although Soubi is a handsome art student in his early twenties, his personality and emotions are stunted by a life of rigorous training and abuse for his bodyguard role. As a result he has become evasive and dishonest by nature, hiding his trauma beneath his beauty and his utter devotion to—and aggressive affection for—his young charge. Soubi adopts the megane danshi persona as a defense mechanism, but it can break violently if he loses his temper. 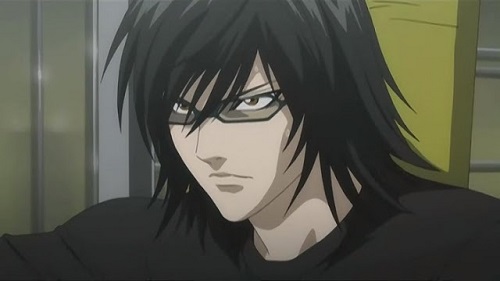 Where Nishiki Nishio is flippant and condescending, Teru Mikami is brutally efficient—an iconic "stoic spectacles" variant of megane danshi. Mikami's sense of justice, fostered by a childhood of failed anti-bullying efforts, leads him to become a prosecuting attorney with a flawless record. When he's not in the courtroom he adheres to a strict regimen of exercise and study, never deviating from his daily routine. Mikami is also a vocal supporter of Kira, considering him a god who passes righteous judgment on the wicked. When an opportunity arises to serve his master, this glasses guy puts his single-minded work ethic to merciless use. 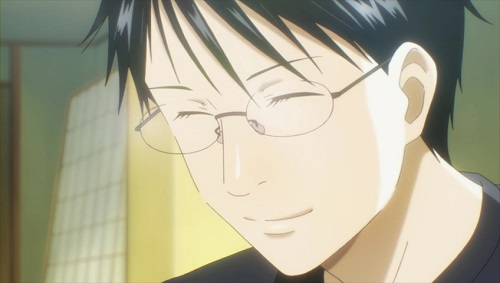 Sometimes, a pair of glasses and a gentle smile represent exactly what they would seem to symbolize: incredible talent and a soft heart. Chihaya's childhood friend and first love, Arata's dream at first was to follow in his grandfather's footsteps of becoming a top Karuta player. He stops playing karuta because of his grandfather's passing, and it is not until Chihaya reconnects with him that he vows to achieve his dream in his grandpa's memory. On a lighter note, Arata's unimaginative nickname is "megane", because woah, he wears glasses. 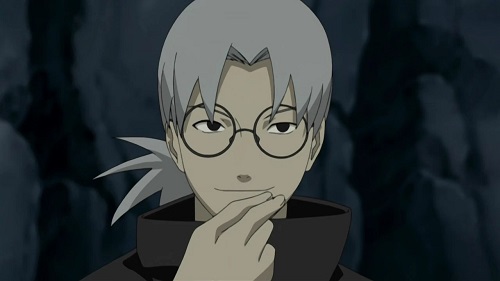 Kabuto is the personal assistant to the sinister Orochimaru. He received his glasses from a charitable nun as a young orphan, and learned a doctor's trade growing up with the Konoha Medical Unit Squad. Though Kabuto is allied to Naruto's enemies in theory, in practice he is equally likely to heal those he should be fighting and treat them with respect if he feels he has something to learn from them. Kabuto's true affiliation is largely a mystery, and more than likely his only loyalty is to himself and his own acquisition of knowledge. The glasses symbolize Kabuto's inscrutable nature as well as his intelligence, as he can be kind and polite one moment and sadistic and cruel the next. The biggest mystery surrounding Kabuto: how does he manage to wear glasses under his Anbu mask? 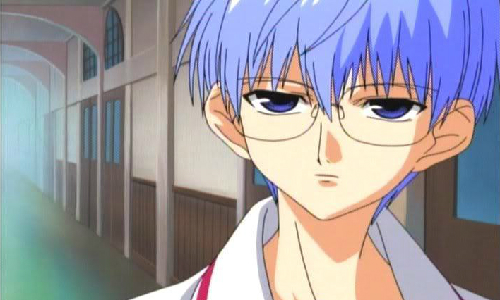 Satoshi's last name can be read in Japanese as "ice hunter," and that's an apt description for the cold detective. A child prodigy who graduated from college at the age of 13, Satoshi works as a police inspector in charge of capturing the master thief Dark Mousy. His aloof and uncaring nature stems from an obsession with catching his prey. But it's also a necessity, as only through complete control of his emotions can Satoshi hold back his murderous alternate personality, Krad. In a literal employment of the megane danshi trope, Satoshi's control weakens if he's not wearing his glasses. 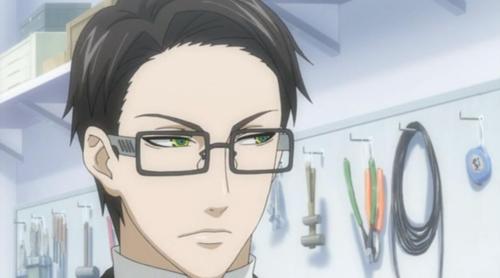 William T. Spears is one of a whole race of megane danshi. As a Grim Reaper, Spears is one of many entities tasked with seeking out and collecting souls for the afterlife, and all Grim Reapers have terrible eyesight. Spears takes his work as a Reaper extremely seriously, perpetually unsmiling and emotionless in his duties. Though he has little regard for collateral damage and holds a powerful grudge against demons for their soul-stealing ways, Spears never lets his anger get the better of him. Unflappable and implacable, William T. Spears always gets his man and looks great doing it. 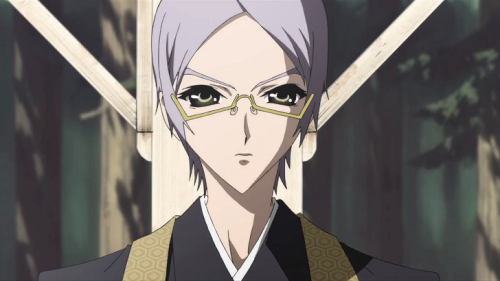 Seishin has seen some truly horrific things. Relatively young at 32, he is the local priest of the village of Sotoba. Seishin's affinity for the supernatural gives him an early vision of the presence of shiki—vampiric monsters preying on the population. His cordial and quiet nature typical of many glasses wearers hides his long-standing resentment of his job, as well as a conception of justice that makes him hesitant to kill even the menacing shiki. Though he is a good priest, Seishin's true calling is as a novelist, and he channels his experiences with the supernatural into his work. 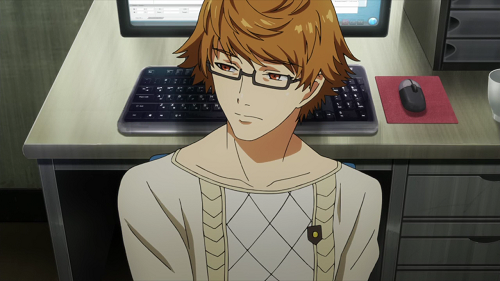 The college years can be a stressful time. They're even more stressful if you're a ghoul who lives on human flesh. A turbulent history with family and the anti-ghoul police has made Nishiki cold and wary of trusting anyone—human or ghoul. His knack for survival has also made him arrogant; though he's only a pre-med sophomore, he demands that those younger than him respect their elders. His one soft spot is reserved for his human girlfriend Kimi, of whom he is fiercely protective. That Nishiki balances murder and med school exams—all while rocking some sexy specs—make him a textbook megane danshi. 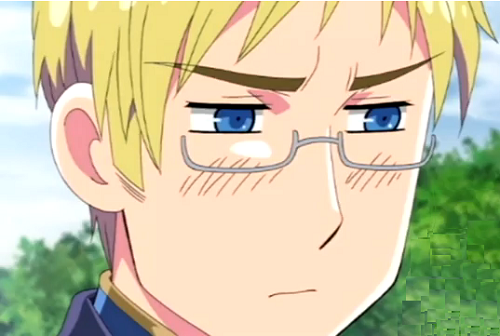 "Conqueror of the Baltic Sea." "The Lion of Northern Europe." Sweden has had many glorious names throughout an impressive military history, but today is a strictly neutral power. Sweden's geopolitical stance is reflected in his clean-cut, bespectacled appearance and his quiet demeanor. Find a way past Sweden's unapproachable aura, however, and you'll find a sensitive soul with a passion for carpentry and debate.

The appeal of glasses knows no gender. Like the famous meganekko, the megane danshi has traits common to most of its examples, among them intelligence, emotional control and politeness. And like the meganekko, these facets of a character are just the foundation for a richer story. The glasses lend a professional aura to the wearer, but they also often hide a personality that the megane danshi wouldn't dream of sharing with the world at large. In both male and female characters, glasses are a sign of refinement, quiet elegance, and intelligence...as well as a smokescreen compensating for something darker or more vulnerable.