What is a Yangire?

Yangire is a type of character that suddenly turns to violence, often for little to no reason. You may think yandere are scary for going off the rails in the name of the one they love, but yangire don't care about any of that. They like to inflict harm. They're not afraid to inflict harm. They may be smiling at you one moment and then whipping out their axe or sledgehammer the next. The only difference between the yandere and the yangire is their reason for turning into psychotic murderers.

It's not uncommon to get the two types mixed up. Yandere and yangire do act in similar ways after all. Both of them wear a friendly facade and both have a hidden switch that sets them off. The main difference is that ones insanity stems from a twisted love and/or affection, whilst literally anything (and sometimes nothing at all) will set the other one off . If it's the former, you have yourself a yandere. If it's the latter, you have a yangire.

The next fifteen characters are all yangires in some way. Many clearly have a screw loose. Some are better able to blend in with others. A lot of the time though, the yangire character has some sort of tragic or horrid backstory that accounts for their murderous tendencies.

For our article on Yandere, check out Top 15 Yandere Characters in Anime: What is a Yandere?


(Warning: Some character entries may contain spoilers or touch upon distressing topics.) 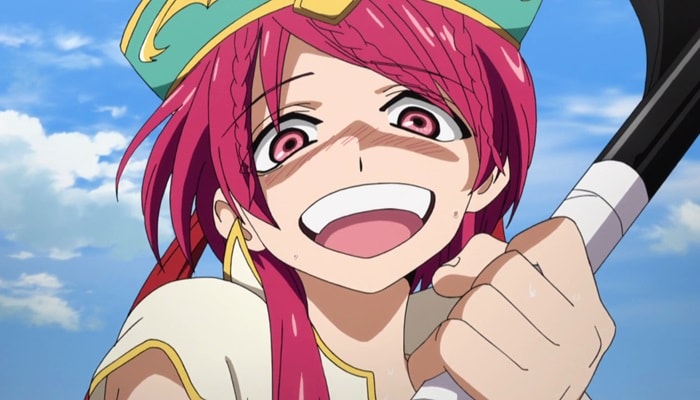 Starting off this yangire list is Kouha Ren, one of the Kou Empire's imperial princes. Behind his smile and petite appearance is a near-sociopathic disregard for human life. His first appearance sees him wielding his broadsword - Nyoi Rentou - without reservation against a group of bandits. While he has no mercy for his opponents, he shows an odd kindness towards his servants. 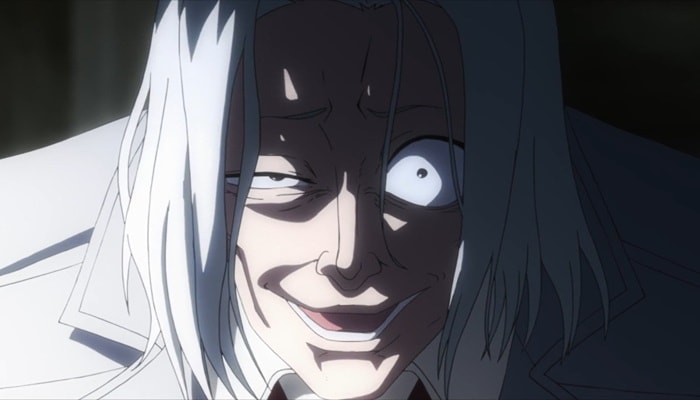 Surely this old, doddering man isn't a yangire? Wrong! He passes himself off as a friendly, somewhat eccentric elderly man, yet anyone who knows the truth behind the briefcase he carries knows there has to be something more. Once he corners a ghoul, Mado reveals the weapon contained inside the briefcase and suddenly turns into a ruthless hunter. He almost has less compassion than some of the very ghouls he hunts. 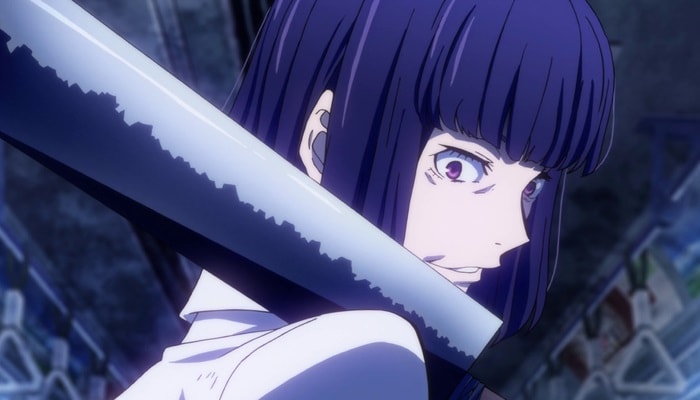 You could almost say Akiko is a yangire by necessity. She is the Armed Detective Agency's physician and her ability, Thou Shalt Not Die, enables her to heal anyone from near-fatal injuries. The unfortunate part is that the injuries do have to be fatal, which means that anyone with minor wounds can look forward to being mutilated on her operating table before her ability can kick in.

She enjoys the process so much that most of the Agency make themselves scarce to avoid being alone with her. 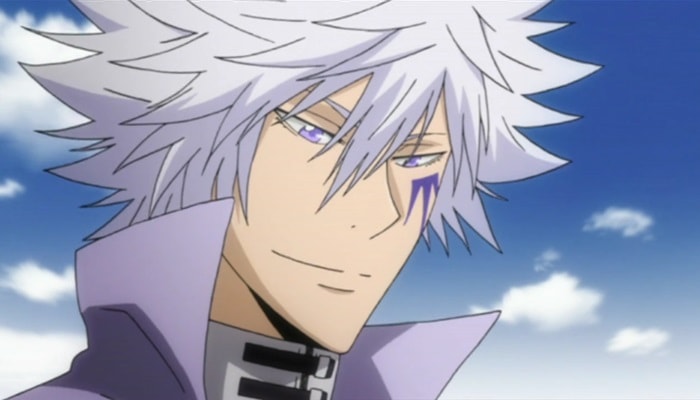 This angelic man surely can't be a yangire, right? Wrong. Byakuran may smile a lot and have an excessive fondness for marshmallows, but as soon as someone displeases him his personality does a complete one-eighty. It doesn't matter if that person is a close subordinate either - anger him or fail to meet his expectations and you'll feel his wrath. 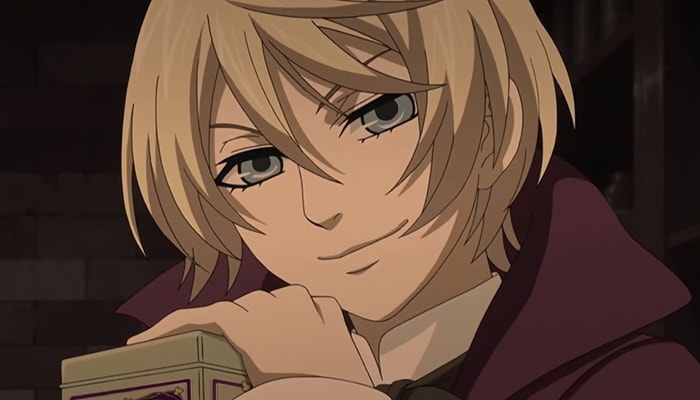 Alois isn't the only yangire character in his series but he is definitely the most sadistic. While he doesn't go around murdering people for fun, he has no qualms at all about abusing others. In the very first episode his maidservant, Hannah, had her eye gouged out simply because she happened to meet his gaze for a moment. 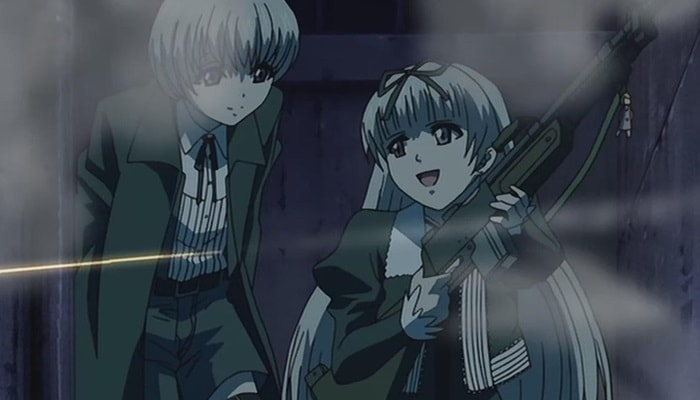 Hansel and Gretel are a pair of yangire twins, combining a history of abuse and exploitation with the usual anime twins trope. It's not clear what gender they are or who is who due to them switching their identities as "Hansel" and "Gretel" frequently on their jobs, but it doesn't really matter when they're coming after you with an axe and an automatic rifle. 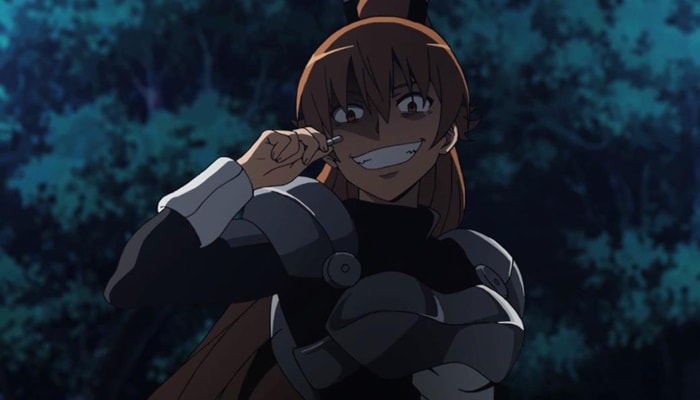 While plenty of antagonists in Akame ga Kill are various shades of disturbing (the manga even more so), there is no arguing that Seryu is firmly in the yangire camp. Her idea of justice has become so skewed that she can't see how she's become one of the very villains she's intent on helping the Empire remove. Seryu's complete lack of mercy towards "evil-doers" as well as her disregard for her commander's orders make her someone whom even her own teammates are wary of. 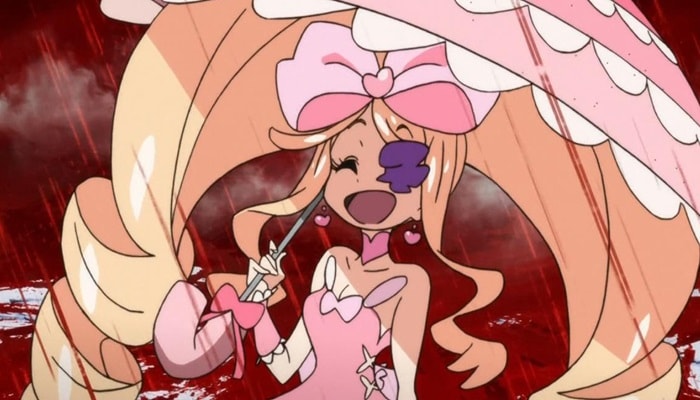 Like Byakuran, Nui portrays herself as a smiling, cheerful person and hides a far more violent nature beneath the surface. She drops all pretenses when injured or struggling in a battle, turning from a bubbly girl to an aggressive, callous fighter. Unlike some yangire who give no sign of their madness until the last moment, she has no problem with dropping casual remarks about death and killing. 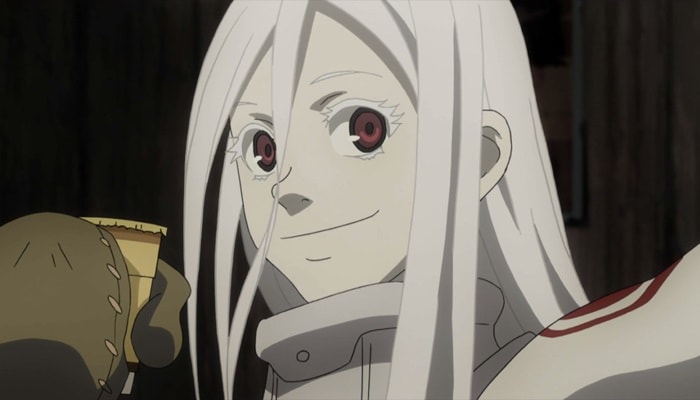 This cheerful sprite of a girl doesn't look at all like she could murder you without thinking twice, but she will. Shiro's yangire side first surfaced in response to the horrific experimentation done to her in her childhood and exists as an entirely separate personality, known as "The Wretched Egg". It could be argued that she is a yandere due to her feelings for the protagonist, Ganta, but she acts mostly upon her own emotions rather than in response to Ganta. 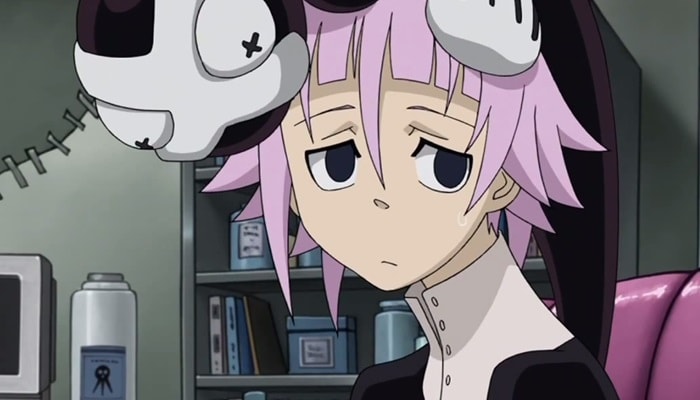 Perhaps one of the sadder characters on this list. Crona isn't quite a yangire because they want to be. They don't possess much of their own motivation and instead are influenced by the witch, Medusa, into aggression against foes. Crona's default personality is someone with low self-confidence and deep air of negativity. Even in the middle of a fight, Crona will talk to themselves or complain about their weapon, Ragnarok's, bullying. When they are incited to fight, Crona's sentences turn almost nonsensical and they break into creepy laughter. 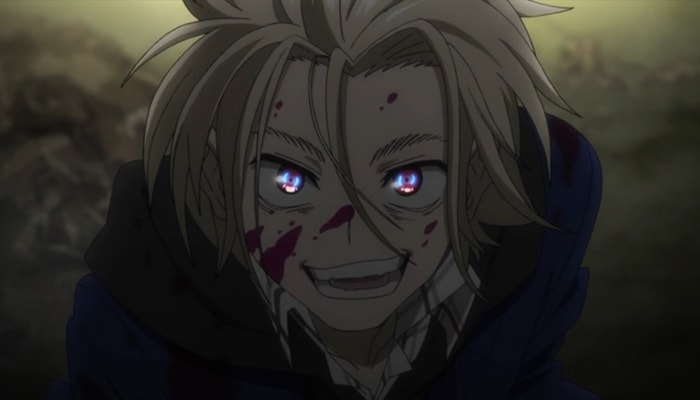 William Macbeth - better known as "Black" - is, like Crona, one of those characters who only becomes a yangire because of outside influence. He plays host to an entity which has absolutely no qualms about getting rid of anyone who stands in its way (hence the playful yet bloody screencap featured just above). William's default personality is that of a kind, well-meaning boy. 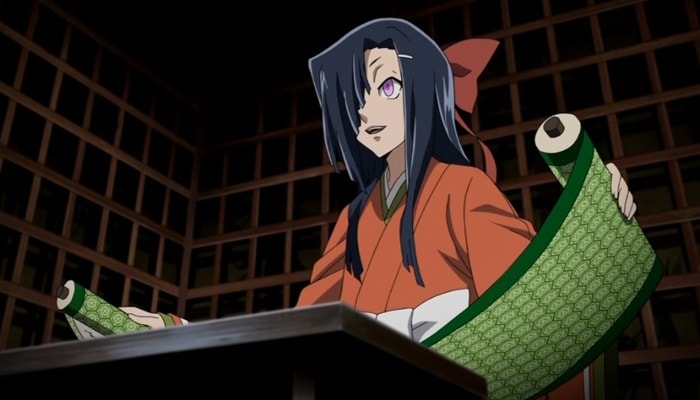 Tsubaki Kasugano's place here is a rather major spoiler for her show. Hope you didn't ignore that warning up top! She presents as polite and friendly at first but her personality flips once several of the diary owners are gathered. She is bitter and cruel towards others because of her history of sexual abuse at the hands of her religion's followers, but those same followers still obey her commands regardless.

From: Rokka no Yuusha 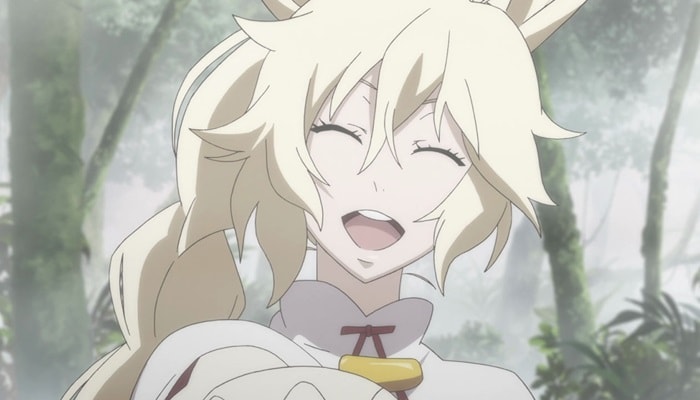 Another major spoiler! For much of the series, Nashetania appears to be a bright, optimistic soul who supports her friends unreservedly. However, she undergoes an abrupt change when it's revealed that she may have been lied to. Suddenly she's a merciless fighter who refuses to listen to reason. No spoilers here on why that happens though - you'll have to watch the series and find out for yourselves. 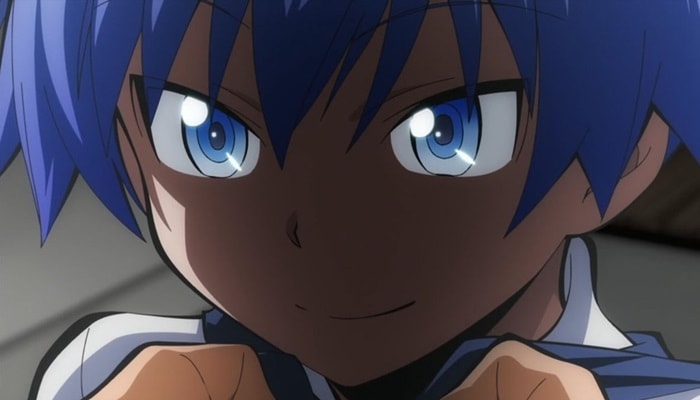 Nagisa is something of a "sleeping yangire". Acknowledged as the top assassin by both his teacher and classroom friend/rival, Nagisa's friendly, unassuming personality means many underestimate him upon first glance. However, that unassuming facade is exactly what makes him deadly. There is only a split second where he reveals his bloodlust and that is the precise moment he goes for the kill.

Even though he could easily be one of the most insidious yangire in his canon, Nagisa opts not to follow the assassin's path. 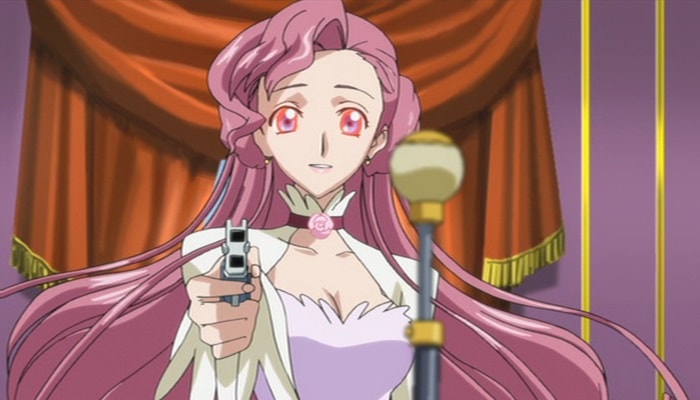 Many people will agree that Euphemia belongs in this list although she doesn't at all deserve to. Her yangire moment happens by accident: an order jokingly given by Lelouch during a private meeting leads to her acting completely against her peaceful principles. Before he can stop her, she runs out, shoots a member of the crowd, and orders her soldiers to perform one of the worst massacres seen in the series.

And there you have it: fifteen examples of yangire characters from mostly recent anime. Even amongst yangire there is quite a bit of variation. Don't be discouraged if your favorite isn't here because there are a hell of a lot of them out there! 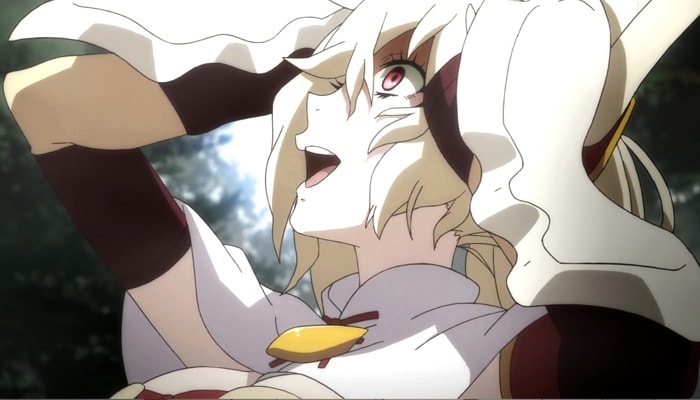