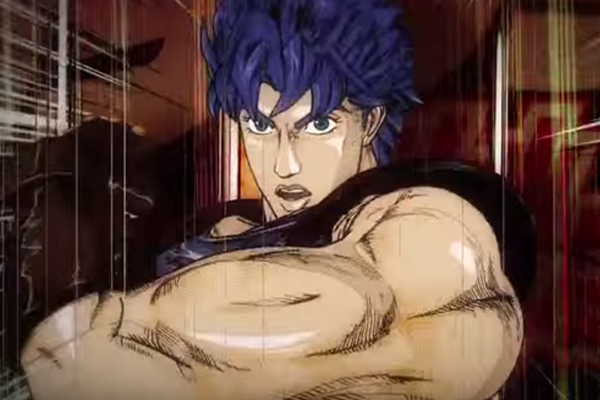 Jojo's Bizarre Adventure's first opening, その血の運命 (Sono Chi no Unmei "A Fate Determined by Their Blood"), starts off with panels from the manga of each of the series' protagonists in reverse order, ending with a full-color, three dimensional Jonathan Joestar before moving to the title card. 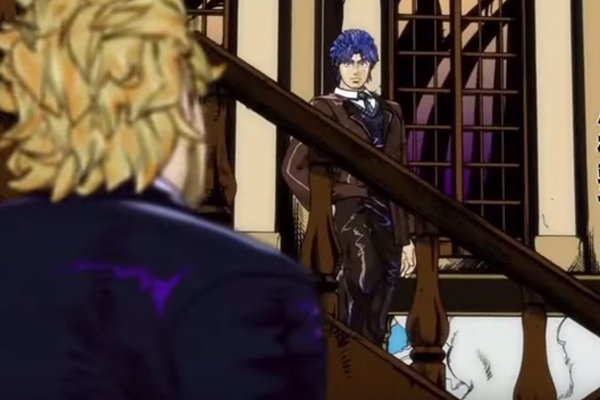 The camera moves to an establishing shot of the Joestar mansion that settles on Jonathan, though it quickly cuts to Dio Brando, Jonathan's foster brother, jumping into frame onto the staircase directly across from him. This shot not only sets them up as physically distant from each other but also as in opposition to each other on a narrative level. 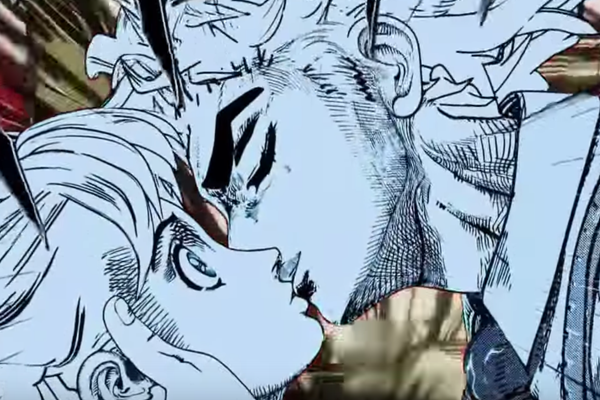 Expanding on that idea, we are treated to a scene from the anime redone in the opening's 3D style where Jojo carves his and Erina's names onto a tree and the latter is tricked into kissing Dio (much to her shock and horror). Jojo's reaction plays out much in the same was as it does in the anime, and the wall mounted mask glows to let us know that it is filled with some sort of evil power. 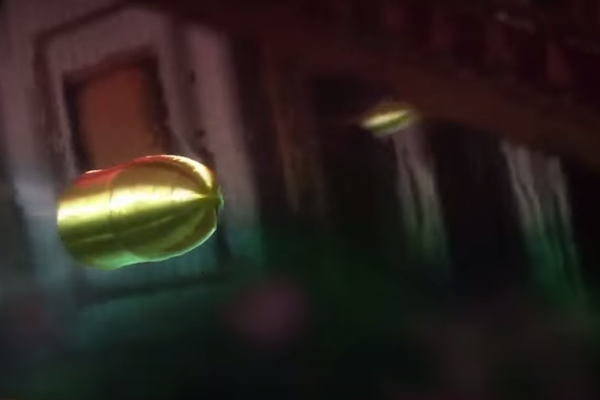 This scene shows us one of the cooler parts of the opening's animation style and how far animation has come in recent years. Not only do the bullets look really realistic (especially in HD), but the use of perspective in the Matrix-like shot of them being fired from across the room 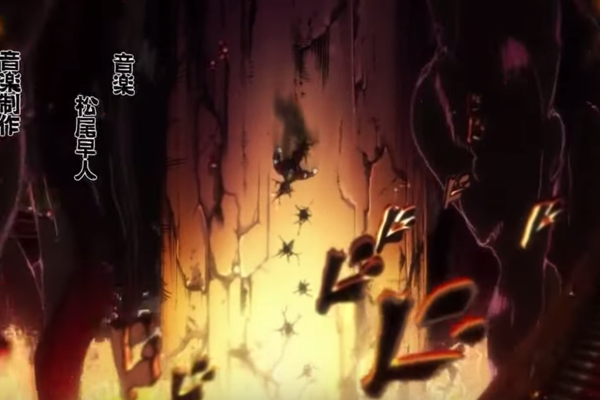 The opening goes even further with 3D manga-style sound effects (specifically, that of slowly crackling flames) floating in the air, which both add to the eccentric feel of the opening and creates the illusion of both space and depth as Dio effortlessly climbs a wall sideways in the background. 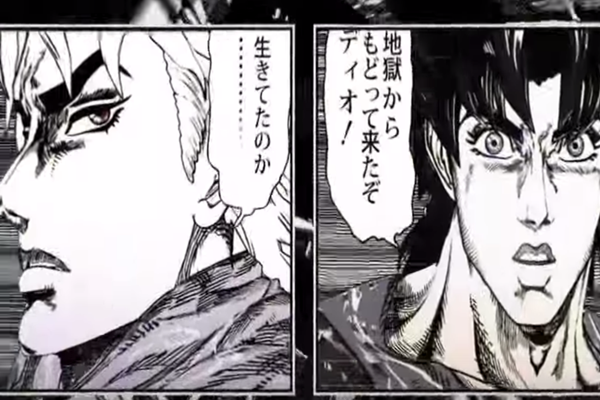 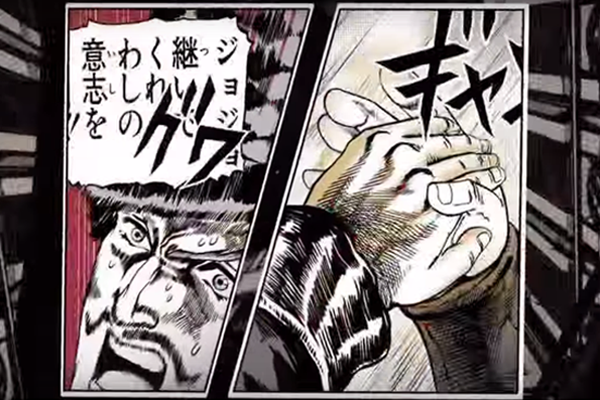 Zeppeli: Carry on my will, Jojo!! 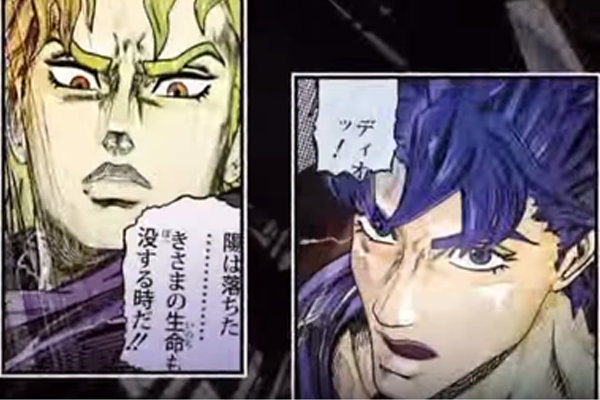 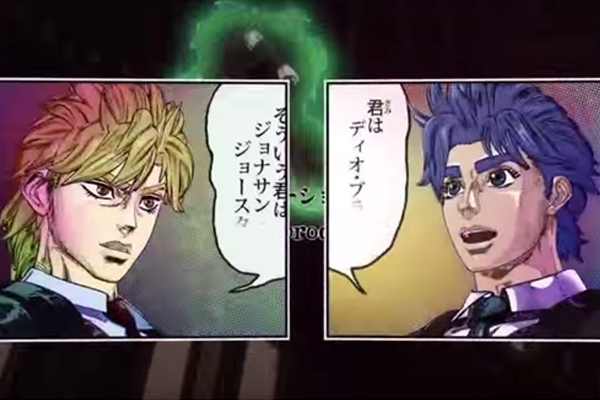 Jojo: You must be Dio Brando.
Dio: And you Jonathan Joestar.

One of the most impressive parts of the opening theme, however, occurs within the final 20 seconds. A myriad of moments from the manga flash on and off the screen in rapid succession with the title of the song echoing passionately in the background. 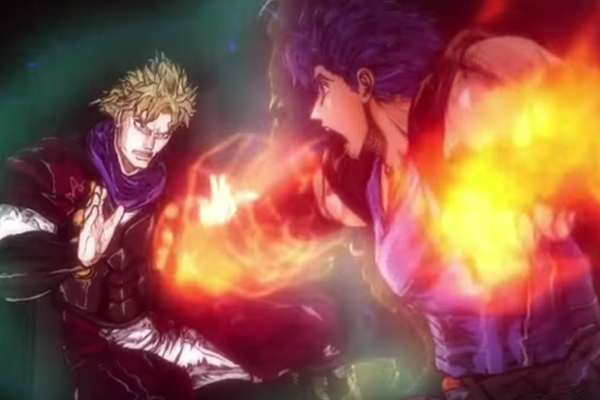 While Jonathan and Dio seem to get off to a good start as adoptive brothers, things between them quickly crumble as Dio becomes incredibly antagonistic and determined to make Jonathan suffer. The first opening to Jojo's Bizarre Adventure demonstrates this quite well, but in the final few seconds the audience is treated to a series of shots, ending with their first meeting, all the while reminding us that no matter how different the choices they made were, theirs was a fate determined by their blood.