A card game about the busty, female ninjas from Senran Kagura? If that's your thing, you've come to the right place. Find out the rules and details here! 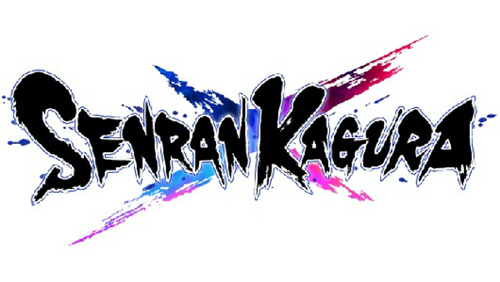 Senran Kagura is a series developed by Tamsoft that first debuted in 2011. It revolves around female shinobi, or mercenaries, and their pursuit to conquer evil while training to become better. Some of the shinobi even succumb to the evil and lose themselves in their training. There are several different training schools that the girls are separated by, which includes the Gessen Girls' Academy, the Hanzo National Academy, and Hebijo Clandestine Girls' Academy, for example. The good shinobi meet the bad shinobi one day and they start to battle to see who is better than the other. Through all of their fighting, they realize that there is something so much darker lurking in the shadows. 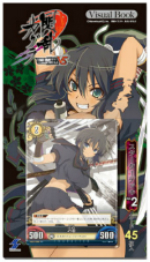 The cards for the Unlimited VS line are vibrant and well designed. In the very center of the card is the character that the card represents. The art is light and airy, usually with bright colors. Below the picture of the character is a small box that contains the description of the character and the character's abilities. To the right of the description is the card's reversal box. This box tells what effects the card will have whenever it is face down in the damage area. Below is a box with the character's name. To the left of the name is the attack points, and to the right is the damage points. These two features will help determine who has won the game.

Best of all, Unlimited VS contains characters from several different series! You'll find the girls of Hyperdimension Neptunia and Blazblue along with Senran Kagura! 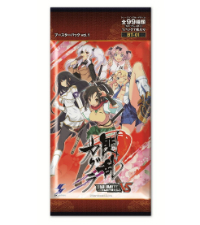 The Character cards are the main cards in the deck. The player starts off with a level 1 character card, and levels up the character as the game progresses. The starter decks will usually contain three copies of a level 2 card, and between one and three copies of a level 3 card.
The next set of cards that are found in starter decks are called Battle cards. These battle cards are all labelled with different colors and words in the upper left hand corner, and these labels are called attributes. Everything about these cards in terms of the layout, which includes the character name and description, is absolutely the same as the main character cards. However, the attack and defense points of these cards are automatically added to the main character that the player is using. There are other differences, such as box that indicates the type of the card, and also a box that determines how much damage your character will deal against the opponent. 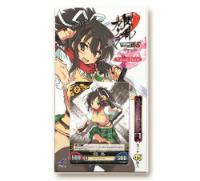 The final cards in the deck are the Support cards. These cards are divided into different attributes, such as item, event, and weapon. The type of attribute that the card is can be found on the upper right hand corner of the card. Each card has an effect that will stay in play for as long as it is stated on the card. The effects of the cards can be found in the description box, located in the lower middle part of the card. Everything else is identical to the layout of the other types of cards. 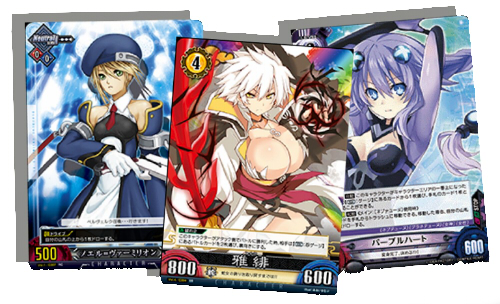 As the Unlimited VS series has several different lines of cards, it is not surprising to note that they all play the same way. The main purpose of the cards is to mimic the way VS games such as Street Fighter are played. It's a back and forth fighting game that throws in new features to make it more like a table top card game.

The mat contains two rows that the player will place down their battle cards. The cards come in colors of blue, red, and yellow. Blue battle cards are placed in the blue row, and red battle cards are placed in the red row. Yellow battle cards can be placed in either row, but in order to play them, there has to be a certain amount of cards in either row. Say a player wants to place down a yellow battle card, but they only have a red battle card in play. If the yellow card says that it needs one blue card and one red card in play, the player is unable to play the yellow card. The purpose of these cards being played is to charge your main character card. All defense and attack points that are attached to these cards will be given to your main character.

The first player to take their turn will be unable to attack. However, they are allowed to use whatever support cards that they might have on hand. Whenever the second player takes their turn, they will be able to attack, and also use any support card that they might want to play. When battling, a battle card is placed face down on the field, and in return, the player's opponent is able to pick a battle card from their hand to defend themselves. If the player has no spare battle cards to defend themselves with, then they have no way to stop the attack points on their character.

The first player to damage their opponent five times wins the game!

Senran Kagura Unlimited VS is a game that has so many rules and guidelines that it's almost easy to get caught up in them. There are so many other rules and special twists that take time and practice to understand completely. The game itself showcases a traditional turn based style, while adding in so many elements that make it completely unique.