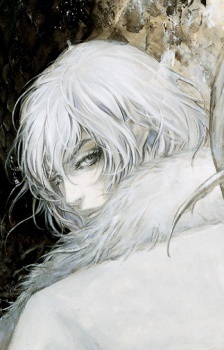 Thank you so much for your recs as well!! I'll definitely check them out and let you know when i do.

gothgorillas May 28, 2019 12:47 AM
really appreciated ur review for the moyashimon manga! i just finished the anime's first season and heard that the second season wasn't so good, but i was thinking about reading the manga bc of how much i love kei. i was hoping that the manga might actually go more into depth with her but im glad i didnt just go heads first if the manga is that icky lol. the author sounds kind of gross, if anything. really disappointed bc i was so excited for actual real lgbt representation!! i love mangaka that make it very explicit and even the focus of the series (like in shimanami tasogare) but i also love it when lgbt chars simply exist and do their thing. it just feels so wholesome and normal and there doesn't have to be any dramatic conflict, they're just themselves and everyone's just cool with it. that's actually one of the reasons why im currently watching cardcaptor sakura tbh :=p

i dont think you've read wild adapter yet, but i think u might appreciate it! story wise it's nothing groundbreaking, but the mangaka has a really fascinating narrative style that i'm obsessed with, and the two main male chars are pretty clearly in love with one another even if it's never explicitly stated. Their relationship isn't forced, and definitely not abusive or unhealthy. There is an anime adaptation that makes it much more clear and undeniable, but as a stand alone thing it's pretty bad so i wouldnt recommend it unless you've read the manga first and ur obsessed lol.

also! another rec w/ natural lgbt representation is banana fish. banana fish has become a lot more popular bc of the recent anime adaptation, but i think id recommend checking out the manga first if u want to give it a go. the anime's cool to me only bc im an actual nyc native and i can recognize even the stores in the BG of when the chars are in Chinatown, but besides the level of detail, i think the storytelling is no where as good as the manga's. the manga's art may be a little more outdated, but it really does grow on u (i swear)!!

sorry for the spam, i'm just a real big fan of lgbt representation in media, esp when it's shown in a casual and non-melodramatic light. i dont mind when it takes the more serious route, but im a real sucker for heartwarming wholesome stuff lol. i hope you check them out, lmk if u have any other recs! id esp be interested in hearing about series w/ good trans representation, compared to gay representation it's almost a unicorn :=/

Ankithadam Mar 11, 2019 8:01 PM
I see, thanks for sharing it ✌. I just trying to understand, cos lot of people never really explain things properly. Is it ok if I send a friend request, just to keep in touch if get any doubts and also if I need any manga recommendations...

Ankithadam Mar 10, 2019 1:26 AM
Hi there, I read your review on manga "Hourou Musuko" which is really detailed and awesome. I was really emotional when the story ended and have somehow understand a part of suffering of people who have trouble with their gender . but reading your review I have observed that you meant that not all people feel like him (shuu)but it was due to "dysphoria" he felt that way, is that right???
I was literally crying when he apologized to his mom saying how bad a son he has been, also how his girlfriend mentions that if he turns out into a girl, she might end up as lesbian. Since she is a budding model, obviously people might poke into her private life and her career would end up which might result in breakup. another heartbreaking thing was how takasuki ended up being a girl at the end( In my opinion I did feel betrayed by her)

edit:
well even I wrote a review just after completion of manga but before reading your review:
https://myanimelist.net/reviews.php?id=303218
But if there is any mistakes in my part of thinking please tell me as I don't want to hurt anyone's feelings...

Kawaritai Jan 4, 2019 2:51 PM
That sounds like a nice endeavour :) I don't know about what elitists would say, perhaps they argue for promoting good shows based on somewhat objective criteria. But I suspect many of us are just looking for shows that may have an appeal based on one's personality and taste ^^ Anyway, I think that creative reviews like yours helps in assessing whether that could be the case or not.

Kawaritai Jan 3, 2019 5:53 AM
Thanks for such interestingly written reviews, like the Moyashimon one :) It's the best one I've read on here so far (not that I have read that many, but still). Or perhaps not the best one, because it is strange to review reviews, and yours did not seem like a real review, at least not a traditional one. But it was by far the most interesting one. Nice work ^^

ArakakiLaurant Aug 19, 2018 11:48 PM
No problem! I'm really, really glad that you took the recommendation, as well a little guilty about the whole emotional roller coaster I maybe beckon upon you, but I'm sure you'll recover in no time.

As you see, I've been sticking to your reviews, I also read your Shimanami Tasogare's one. Every one of them has bring me new perspectives that I deeply appreciate. Thanks for your good work!

I noticed that you loved Shoujo Kakumei Utena, I likewise finished it recently, but didn't have a blast like you. But catching up with some analysis & essays and understanding it better I can see why you liked it so much. I hope to see it reviewed by you someday!

Thanks for getting in touch. =)

Prideful_Master Jul 20, 2018 6:49 PM
indeed. and not only that, apparently there's also a dub. I probably won't watch it, as Aikawa's original shows tend to be better in Japanese. But I am curious as to how it turns out.

ArakakiLaurant Mar 19, 2018 4:39 AM
Loved your Moyashimon review, so honest and personal.

I always wanted to read the manga, mostly because I had my hopes high to see Kei's romantic plot being developed, seems like I would be disappointed. So thank you I guess. (The biology themes are cool but not what really drive my interest in this particular work)

Also, I'd love to hear your thoughts on Hourou Musuko, it's almost curious that you don't have it on your list.

Prideful_Master Sep 23, 2017 8:53 PM
Your review of the Concrete Revolutio manga was a great read. I didn’t even know there was a manga and having read your review I wish there wasn’t. Though to be honest, it kind of pisses me off that the manga actually got a release in the West before the anime.