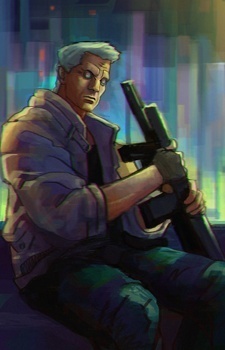 I agree with this. There are rare cases where some people survived shots into the forehead, you could just google them. This is one of the most extreme and interesting cases where he survives after an iron bar goes though his head and then it lands 10m away. There's also to consider she was a kid and was trembling in fear and confusion so the bullet didn't arrive perpendicular to his skull which can contribute to his survival since especially a round object is more resistant if hit diagonally.

However I don't care to discuss this point, I am not a doctor. I think that every show has the benefit of a 1 impossible or improbable event without being questioned, especially if that's the trigger of the story. Good stories rarely are made by mundane events and usually have this 1 event that breaks that mundanity and I think the point is focusing in what happens next and not necessarily on the event itself if the show does't dig in deep that particular event. Monster is not a a show about medicine or neurosurgery. Even if Tenma is a doctor Urasawa doesn't go deep in the medical topics so I find kind of superficial to focus so much on it as to say that the show made no sense since even if very unlikely it is not an impossible and asspulled event.

If you focus on the pure realism of the story might as well point at the final flash back. The thing is that for psychologically shows I don't pay that much attention to realism as the concepts intrigue me more.

Oh, I am pretty sure Perfect Blue is a better thriller from what I've heard from many people. The thing is that I haven't seen it yet and the post was asking for the ones that we've seen. I am probably going to watch it the next time I go on travel as I found it being a good occasion to watch films since normal series are too long.

I thought you were another of the people complaining about the finale but I do see your complains even though they are not relevant for me.

Aria-da-Capo Nov 24, 2016 4:06 AM
At the moment, there's no better thriller than Perfect Blue in the animation medium.
Monster is good, but there were hits and misses with the story, some things that shouldn't have been included and that made no sense; also, having a larger than life villain, capable of manipulating almost everyone, as well as the mcs rarely being at danger lowers the bar for being thrilled.

With Perfect Blue, there's always this dreadfulness that our mc is at a constant threat, whether that being her imagination, or a possible outside instigator for everything that was/is happening to her, on top of this, being used as an inspiration for Black Swan and Requiem for Dream.

Oh yeah, I forgot about Perfect Blue. And I agree with the fact that is more "thrilling" than Monster.
Nonetheless, I don't know what you're referring to with "things that shouldn't have been included", but I still prefer Monster between the two, precisely because of the vivid glimpses of humanity that it often shows, although they don't really have too much to do with the plot. But if you're talking about how the main story is less effective towards the end, than I 100% agree with you.

zal Nov 24, 2016 2:57 AM
Hi, I've read your comment in the thread about thriller and I was curious what about Monster made no sense?

Tobii- Sep 27, 2016 8:42 PM
Mutta is my 3rd favorite anime character, he is the most likeable character I have come across so far.

I'm only 30 chapter into Takemitsu Zamurai, but it's amazing already. The artstyle and characters are great, I love Souichirou's childish nature and Shinnosuke's murderous aura (plus his rat pet is awesome). I'm eager to check out Matsumoto's other works after finishing it.

Tobii- Sep 27, 2016 5:01 PM
You are the first person I have seen who has both Hyouge Mono and Takemitsu Zamurai in his favorites.

Dudu Sep 12, 2016 3:45 PM
Yeah lol the faces are magnificent! :D
The clothing is also vert fitting and put the extra stylized feel to the atmosphere. LOVE IT!

Dudu Sep 12, 2016 3:02 PM
I am not done yet, but this has been one of the greatest shows I've watched. Fantastic timepiece depicting the era in an intriguing manner with some serious dramedy, beautiful characterization, philosophy and the aesthetic theme. And some of those facial expressions! xD The thematic highlight of Wabi Sabi is truly inspiring and enlightening.

goshujin_sama241 Apr 16, 2016 11:51 AM
It has been an interesting two weeks. We saw the largest number of nominations we have ever seen and the introduction of a semi-final round which was exciting until the end. Now with all that it is time to vote for the Face of UAS for the Spring Season. With this our club will be redesigned to fit our new winner. Voting will take place 4/16 and last until 4/24 at 23:59 PST (MAL time). The winner will be announced on Monday 4/25 and the redesign will take place that week. Vote now and make your favorite the new Face of UAS!!!

The long message is just to update you on new things going on at UAS!


Watermelon-chan and her games are back and to kick it off she has started a Mafia Game which will take place at the end of April. To sign up click here. Don't know what a Mafia Game is.... for more information click here

Ever want to follow what is going on in the club but don't really log on to MAL that much? Even if you are logged on there really aren't many notifications unless you are heavily active. Afraid that you may miss out on something big? No worries... for all things UAS follow and/or Like UAS on Twitter, Tumblr, and Facebook to stay up to date on all things UAS! More information available here!

For all those who wondered it, List editions will be up to date and open again by 4/22. It has been an extensive process updating the list but one that should be well worth the wait.

To those who claimed an character and/or requested a forum signature, your request has not be forgotten and will be completed within the next week or so. I apologize for the wait.

The Anime of the Week process goes away and we will be introducing A Monthly Anime Feature. We decided that a week is not really a long time for our members to watch a series taking into account life, other anime you are watching, and other interest and hobbies. Therefore we decided to make the process a whole month to increase member participation. More information to come soon as we are set to begin in May.

As always don't forget to be on the look out for WingKing's Short Anime Spotlight. It comes out every Wednesday, however he might throw a Monday in there every once in a while. There he puts focus on short, unpopular anime and reviews them. You have one that you want him to review, just shoot him a message and he will be more than happy to work it into the schedule.

Don't forget about our Forums. Many new topics are up coming such as "Unpopular Anime you are Enjoying this Season" "_________ Season rap-up Review" AND "Is Fandom a type of "popularity"?'

Don't forget to check out our Your Anime Collection (Reintroduced) forum to check out the members of UAS's anime collections. As well share information and trade secrets.

The Round of 6 has officially began. This semi-final round is a first at UAS and gives a better opportunity for more titles to gain exposure in our club. Voting in the Round of 6 will take place between now and Friday 4/15 23:59 PST (MAL time). Upon completion the finals will start a few hours later and will last the usual week. Vote your favorite into the finals now! *Remember there are 6 groups to place your votes in*

Well it is time for the start of the spring anime season and after taking a break for one season it is time once again for us at UAS to select a new Club Picture. In this forum thread nominate your favorite unpopular anime and/or character. Each member may make two nominations only. They may be anime/character, anime/anime, or character/character. The choice is yours. Nominations start Friday 04/01 and go through Friday 04/08 23:59 PST (MAL time). Shortly after a poll will be created using 6 selected nominations. If your selection isn't chosen worry not as we do this with every new anime season. (4 times a year) Who knows, maybe your nomination will be the new face of UAS!!!

New to the process
*Upon announcing a winner, the club page will be redesigned reflecting the character or series that wins.*