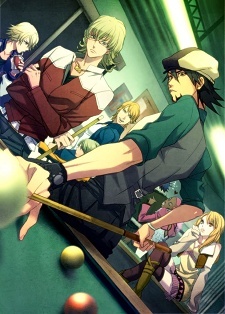 It has finally happened guys! WE HIT 1000 MEMBERS!!!!! *throws streamers* I love all of you guys soooo much! Thank you for sticking with me all this time and making We Love Bishies the friendly, boy crazy club that it is. It would be nothing without you guys.
I have one more announcement. Starting next month I am not going to be sending out the newsletter to everyone. Only the people who sign up for it HERE will get one. With the club growing so much it’s becoming difficult to send it out. Thank you *bows*
Here are links to things you might like:
LE 1000 card
LE Bishie of the Month Cards
Vote for Next Month’s Bishie
Whip a Bishie
Sign up for Newsletter
~Taichou

Hi hi minna-san! Sorry that we missed last month’s newsletter, I had a little hiatus pretty much all of June and spent July making up for it. Please forgive me! -bows-
Anyway, let’s get down to business! Here’re the goodies for this month:
Bishie of the Month Cards
Vote for Next Month’s Bishie
Whip a Bishie for August
HELP WANTED!!!!!
We Love Bishies is always looking for perky members that wish to step forward and join our staff. Every month we need willing vict-- *ehem* volunteers to help pass out the newsletter. It is one of the most important jobs that we have in the group and is rewarded every month with special privileges. If you’re willing to take a stand for the bishies, please message Taichou on her page so she can mark you down!
Happy Nosebleeds
Taichou.

Happy new month all! We hit 900 members this month!!!! YAY! 100 to go till we are finally there! So, claim your cards here before they run out :P
Now some other gifties for my lovely members :)
Bishie of the month cards
Vote for next month’s bishie
Whip a bishie
I’m looking for wonderful members willing to help send out the newsletter once a month. Pleaseeeee help me! Otherwise they might have to stop if the club keeps growing like it is :(
If you want to volunteer, please let me know on my profile.
~Taichou

It seems a number of people think that the mangaka originally planned Pin x Ayane but changed her mind. I actually don't think this is the case. Of course I could be wrong, though. It could either be that Pin x Ayane was never her intention to begin with and that Pin was never an option or it could be that she is buying some time until it is close to graduation. In another word, Kento might be a detour to Pin. These are the only two options I could think of but again, I could be wrong.

Ayane is one of the most complicated characters and it is true that she is the most difficult to figure out. I don't know how to interpret that scene either but you could be right in that she way trying to relate to someone else like herself. She might have felt that she was the only one who never truly loved. But then again, there were those subtle hints when she was noticing Pin with the tour guide. Also, when she went back to her room after she saw him in the hallway (episode 56), she looked a bit troubled when Chizu mentioned Pin.

As for Kurumi, I, too, thought that she will end up with Kento. I was looking through my earlier volumes of the series a couple of days ago and I noticed things I didn't when I read the series the first time. I noticed that Kento was noticing Kurumi more and more. It could be that he felt bad for her after being rejected by Kazehaya but it looked to me like he wanted to get closer to her. I think that if they spent more time together, he might have fallen for her. I definitely think Kento and Kurumi look good together and I think that she might be the right one for him.This is how I see it.

Do you think the scenes the trio (Pin/Ayane/Kento) have been having might mean something?

My interpretation of the whole thing: Ayane started to become conscious of Pin when he patted her on the head and said "You're a nice girl" in episode 45. Of course we can't be too optimistic and say she fell in love right then and there but it was a start. I think that even if something started to move in her, she would have had dismissed it because it is Pin we are talking about. I'm sure that she never imagined she might feel some thing for him of all people, so it could be that she is not aware of those feelings as feelings of love or she is simply dismissing them. When other people say that she is nice, their words don't seem to have effect on her. Kento, Chizu, and Sawako said that she is nice but she showed some emotions when Pin said that to her, so his words must have affected her, right?
What I thought and kind of still think might happen is that she will realize her feelings and might go after Pin and confess. The possibility of her being rejected is there but maybe she will have her wish comes true by falling in love with someone without being forced into it.

I think both Pin and Ayane are difficult to figure out. Some people think that he might have feelings for her but I don't know. In their situation, I honestly believe Ayane is the one who should come out and say it because I think Pin is a bit dense and he might not get it unless this happened.

Sorry for all the rambling. What do you think of my interpretation and analysis? Do you think I'm being too optimistic and hopeful?
All Comments