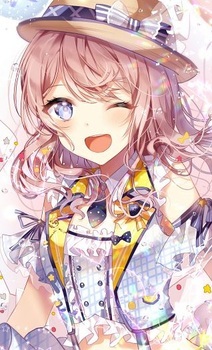 LuhanIsBae2 Nov 10, 2019 7:32 PM
You're fine, and I understand completely when it comes to school. What are you majoring in? I'm going for a Psy.d, so I'll be able to start attending university for the spring semester. It doesn't help when you have a professor that doesn't care if you succeed. On my first day of school in my English 102 class my professor (who was a bitch, she was only nice to one student and he was the only asian in the class) said that if you can't handle this class that you should drop out of college. She also made us write political topics like immigrants coming from Mexico, and Saudi Arabians. I'm sure that you have dealt with awful professors too.

I've been find, just a little overworked because work will start to get busy since it's that time of year. I unfortunately work at a country club, which is something I hope you never have to deal with. Oh, I guess I do have a decent sized list but it's nothing compared to people in the thousands. In high school I had so much free time that I wanted to watch anything and everything of anime, but I got a little burnt out since college. I've mainly been watching K-Dramas and original shows on Netflix and Hulu.

How are you? I hope that your day has been good.

LuhanIsBae2 Nov 5, 2019 9:11 PM
Hello, thank you for accepting my friend request. I hope your day has been or is going to be good.

Catherineeeeee Nov 11, 2018 7:02 AM
On the weekends? That sounds pretty horrible. I don't think many universities here have exams on the weekends but some unis like Cambridge have classes on Saturdays. Biochemistry seems cool though, I was going to study something like that if I didn't study art. Oh no, I hope he's okay! You can always complain to me if you want, I don't mind listening. Make sure you both take breaks!

I'm not sure how different universities over here are compared to Canada. We don't have roommates though, we have flatmates instead so we just share a kitchen and bathroom with a few other people. I go to a specialist art uni at the moment, so its kinda different to normal universities

Catherineeeeee Nov 9, 2018 1:37 PM
Honestly no. I'm doing a group project right now and I'm ready to pack my bags and go back home haha, its so stressful omg

What are you studying?

Catherineeeeee Nov 8, 2018 2:04 PM
You seem to have done a lot of imagining in both sending me a message and thinking I had a different username haha. I haven't changed my username, but now I'm scared that I did and I completely wiped it from my memory...

blumenbalt Sep 28, 2018 4:29 AM
ooh, I got it, hope I can get the cards I want with it, I'm more hyped up now, at least I already have the swimsuit Lisa hahah. I think the dates on EN/JP are almost in sync aren't it ? I mean, almost one year behind?

I know right? god university is killing as well, can't wait to finish it, I'll probally end up buying all of popipa since I really love them, the main problem is that I don't have anywhere special to put them :/

About the cards holy god I can't even decide, those cards are definilty my favorite now, all of them are so cute that I'm dying
I really loved the aya and the hina cards, they are both astonishingly cute and chisato and maya are like ?????? omfg, spent like 1 hour blowing my mind yesterday because of those

blumenbalt Sep 27, 2018 8:15 PM
NOW I DO KNOW IT'S KINDA ANNOYING TO KEEP ON COMMENTING BUT JESUS HAVE YOU SEEN THE NEW HALLOWEEN CARDS I'M GOING NUTS

how does this miracle ticket work anyways? I got one in JP but I had no idea how it worked.
for now I what I really want is any card for aya :c I have literally nothing for her in WW/EN, but I mainly want the cool card from new year's gacha.
my favorite cards are probally the persona cards, the MMORPG cards set, the first Lisa bikini card, and the Bushido set that will come in april, I really love the japanese tematic, I probally adore a lot of other cards but I can't really remember them right now.

I wish I had attended a concert, unfortunally I live in south america so there is hell no way that I could attend that :/ I'll probally end up buying one aya figure soon or later probally, or one of popipa nendroids I loved them! how about you?

blumenbalt Sep 25, 2018 7:28 PM
" ooh I see you're a man of culture as well "
my favorites are as you've probally have guessed, Aya, Hina and Lisa, I mostly love everyone of the game except for like 4 girls, lmao.
I like so separate my favorite bands into favorites and favorite musically, because my favorite band is definitly pasupare as well, I love them soooo much. I really like popipa and roselia as well. Afterglow is band that is constantly growing inside my heart so I really like them as a band, however musically I gotta give my props to Roselia, their music is insane holy crap, after that would probally be afterglow with popipa, I really like pasupare songs but it's mostly because it reminds a lot of the story and all the message and everything boiled up together, not only the music, so I can't really count it as purely musical to me. I enjoy some of the hhw songs, but I don't really like most of the band members, so it's kinda hard for me lol . ( I only like kanon and a little of kokoro and misaki ).

I don't have anything special as for titles since I don't really have much strong cards in my opinion and I've started playing not long ago ( end of july ) so I haven't participated in a lot of events, my proudest title would probally be both my top 1000 title that I have hahaha. other than that I only have 2500 and one 5000 title, not a big deal, but not much could be done since it was my first event :/

I'm planning on getting both tier and song tier for the bushido event on next april ( probally ), I really really really really and the title for A to Z of pasupare, since it's one of my favorite songs from them. I will try to get on the other songs as well, but my main goal right now is assamble the best cool pasupare team possible for this event.

I'm also planning on tiering the persona event and getting the live will change title since it's one of my favorite covers and because my currently best team is the same team they are going to use in the event hahah.

Most of my plans on events consist on trying to get the title for the songs I like, unfortunally shuwarin dreaming was already taken as well with hey day capriccio, but I intend to get from every song I really enjoy, specially hanamaru andante and A to Z.

Are you aiming to the dream festival gacha on holydays?
Also, what are your favorite cards or ones you like ?
All Comments