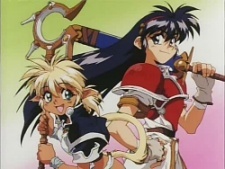 JTurner Apr 18, 2010 8:14 PM
It's funny you should say that about the song/cip episode; I used to kinda like it, but I now I see it as a bit of a distraction and kinda a bizarre way to wrap up the Africa story. I mean, it was bad enough that eps 32 and 33 basically ruined Nadia's personality, but there's a part of me that thinks that, if they REALLY wanted to keep this as part of the plot (not that I'm for it; I object to it immensely), I think a better idea would have been to create a totally different concept.

In particular, I'd probably rewrite ep 34 as this: Jean, fed up with how Nadia's been treating him lately and at being betrayed, decides to leave for La Harve. Everyone calls Nadia out for her behavior (even the Africa warrior takes back his "flattery", adding that his fiance would never betray him) and all set out to look for him, while she sulks. After a while, when no one is able to find Jean, Nadia's conscious begins to bother her, and she later learns that he's been kidnapped by Grandis's ex-fiance. She sets it on herself to rescue him. She tries to apologize, but Jean is no longer interested in having anything to do with her. Finally she offers to help Jean find his way back to La Harve. Just then, Grandis's ex-fiance awakens and tries to shoot Jean, but Nadia saves him, her arm grazed by the bullet in the process. At this point Jean realizes that he can't leave and decides to stay on after all; the Africa warrior and his fiance all attack Grandis' ex-fiance, while the children escape to the Gratan, setting off for Tartessos. Nadia confesses she doesn't care about what the Africa warrior did to help them escape, for the person she loves is the one who's the most important to her--Jean.

Now I think that sounds like a better idea for a story to replace the music video, doesn't it?

Even so, there's a reason why I skip around 32-34, and I really don't blame you for being disappointed with them. Sandiwching them inbetween a crucial bonding moment between our protagonists and the final arc (which disregards that entire thing) doesn't sound like a very good way to tell a story like this.

JTurner Apr 16, 2010 7:44 PM
So you got through the Africa episodes, eh? I'm amazed that you suffered through them, as I found them to be absolutely unbearable. Having Nadia flip on Jean after admitting that she was so important to him was a very very bad idea, and it wasn't well executed either. I noticed there was a recent 1 star rating on Episode 33 of my discussion, and I figured that was probably you. But the show really DOES bounce back at ep. 35, and effectively disregards those past three episodes as well as the island ones (see why I often skip past them now?).
All Comments