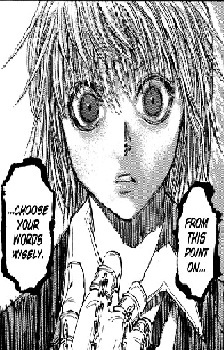 RedFlamedArt Jun 24, 2015 8:30 PM
Haha, yeah I keep forgetting that HxH was mid 90s while Naruto is early 2000s. Regardless the whole idea behind Gon or Naruto seems to come from DBZ's Goku. Never giving up on friends, not that smart, same can be said about Luffy from One Piece. I never mentioned development in the comparision just general appearences of the characters, but thanks for that anyways.

Amphetamine Jun 24, 2015 8:22 PM
I tried reading the manga years ago, but to be honest since I started with the anime the artwork kinda threw me off, though I know that was stupid of me back then but after finishing the anime I just knew I had to read it so it's I'm planning to. I just wish the author stops going on Hiatus, same thing happening with Berserk...

0123 Jun 16, 2015 5:51 AM
I've continued on hxh since a lot of you people were bugging me about it.The more I watch the sillier it gets,the more plot holes appear,the more wrong I find with the show , I might rewrite the whole review when I complete it and try to be a bit more objective about it although a lot of my past opinions remain.

I'll still point out the whole ''it's a show for children,pure shounen'' thing , since it truly is,despite the bloody ''cruel'' moments.(since that is my reason to originally hate the show,the lack of truth in it's reputation)

+the point of bakuman was never in the love story, that is just a story mover, you might have wanted to pay more attention on the mangaka aspect.

0123 Jun 8, 2015 1:44 PM
There are infinite ways Hanzo could've won that fight (I just made up one on the go) but he clearly just surrendered so that the main characters dumb stubborness could be shown as ''the right thing to do in life'' to little kids (never give up on your dreams etc.).

Evil superstrong brother is just one example in the billions of standard shounen characteristics, just watch a few of those, watch Bakuman, and you'll understand.

I did drop it after 22 episodes , and the reason I dropped it,and then reviewed it badly, was because A LOT of people assured me that it's not just another shounen,it is better more complex etc. . . . I couldn't believe it because of the silly animation,and googled reviews and things like ''is hxh a kiddie show'' , and everybody just said positive things about it and assured people it's ''really adult and not your standard shounen''.

So I figured ....hell...this show needs a bad review to save some people, and now I get the hate, but whatever someone somewhere might understand.

CeeTwo Jan 17, 2014 1:41 PM
Im gonna givw you the same advice someone else gave me: stop taking their bait, they just want to flame the threads, it's all getting deleted anyway :)

josenewtype Jan 12, 2014 10:03 AM
Gundam in general would be aimed for the seinen crowd if you put it that way. Gundam age was just a weird experiment, but it's not all that bad. Build fighters is just for fun, but when you watch real gundam, it's totally mature. Nothing shonen about it at all. It's sci fi mecha and political, and romance.
All Comments