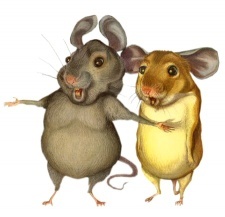 cecropiamoth Aug 28, 2019 11:45 AM
Folks! Check out this sites "Featured Articles" section. There's lots to learn about anime in those articles, and the writing in them is always clear and non-judgmental.

lpf May 18, 2014 1:56 AM
Thanks a lot for reading my review! I should say that there's a promising YKK rescan project using high-quality scans from the new volumes. Something to look forward to.

GreySilence Oct 13, 2013 8:45 PM
Thanks for writing that review on Bakemonogatari. I couldn't help but get ridiculously bored of the show even though it's in the exact genres that I usually find the most interesting. It felt messy- and it's possibly one of the most overrated shows in a long time.

Orion1 Apr 29, 2013 11:01 PM
Hey cecropiamoth, thanks for your reply this week in the Cinema of Japan group. We are currently trying to figure out a way use a bot to get around the lack of mass message function that still remains here on MAL. We have had some limited success in the Critics & Connoisseurs group, but it has approximately a fourth of the members. My last attempt to send out mass messages was mostly unsuccessful. The Bot failed alphabetically with members in the A's. I attempted to manually complete the rest and made it to the last page. It took over 10 hours to send out the messages I did, and had pathetic results. Literally you are the second non regular commenter. If we are able to find a fix perhaps we will be able to start sending mass messages again with updates of movies of the week and director spotlights. Staff right now has been also lacking, so the problem is compounded. There are possibly some tough decisions in the future of the club, like making it private and asking for minimum participation quota's, especially from all club officers. Users will participate based upon how much they are being interested. As MAL is not a live action film site, it's hard to know just yet what our members might be more interested in and what would encourage them into becoming more active. I suppose we could start putting some polls together and attempt another mass message. This is all a lot of work as I explained earlier, and will require a more active staff. These realities have made us scale down operations a bit. But we will continue to offer new movies of the week, and directors of the month. I hope you continue to stop by when you can and check out what we are doing and share some great work that you've seen.

lpf Sep 29, 2012 10:54 AM
Well, you can consider how you barely get to know anybody in big cities, whilst in the smallest villages—in France at least—it's almost as though everybody were your neighbour. It doesn't help that the countryside has distinctly older population than that of the city, which means the inhabitants frequently have to go see someone's funeral. If you take in account the fact that governmental institutions seem to be fairly absent from the characters' lives, their way of life is understandable.

In any event, your insight as regards Alpha's immortality was very eye-opening! I don't know if it was the author's precise intention, but it does make perfect sense. It's interesting how Alpha's immortality was stressed at the beginning of the manga: she says she can wait indefinitely, but she isn't depicted having different feelings from the humans. Meaning that, as you cleverly pointed out, she can suffer from boredom just like humans, but what was meant originally was that being immortal implies her lifestyle (and not her feelings) is completely different.

I'm glad that this project is interesting the fans. The presentation page was mostly written by Capey, a friend of mine. I also found the comparison you made pertinent. The fact that humanity was declining has made the remaining humans naturally became more united, in a nearly collectivist mentality at times; free of the trouble our hurried lifestyle involves. Perhaps said lifestyle is what caused the world to become how Yokohama Kaidashi Kikou depicts it?

If it is needed, the petition page is here. [Link]

By the way, I appreciate the request. Unfortunately, I can't accept requests in general right now: certain features of the website lose readability when your number of friends is too high; hence, I regularly remove the persons I don't know or remember from my list. As I find unfriending someone to be fairly rude, I decided I would try not to add people I'm not very close with from the beginning.

Bakemonogatari has a lot of that sort of edgy, teasing dialogue you get from Holo in Spice and Wolf. It's got a weird artistic style too.

Katanagatari is more straightforward, but is another dialogue-centered country-traveling adventure of two romantically linked companions. Each episode is twice as long (50 minutes), so the dialogue benefits from not being rushed. Togami, the female companion, is quite a lot like Holo in that she prides herself on being wise and cunning.

cecropiamoth Sep 14, 2011 1:32 PM
Reply. Thanks for the recommendations! I've been working my way up the age/personal development hierarchy of anime and manga for a year, in part because I've found the kids-eye-view of Japanese life fascinating and new. Now, though, I find myself at last squarely in the "likes stuff that makes you think" category. Your recommendations look like they fall in that category, and, because of the slow maturation of my anime/manga consciousness, I have seen none of them yet.

My main goal at the present time is to avoid the kid stuff and find the better stuff. Thank you for helping me do that.

santetjan Sep 12, 2011 4:31 PM
First of all: my thanks for your comment. It is always nice to see people reading multiple reviews of any series - and reading them in their entirety.

Yes, Spice and Wolf is quite a gem. Not only do I find myself enjoying every format of the story - anime, manga, novel -, but I've also noticed that most of its detractors are, on the one hand, intelligent people who present their case eloquently and properly enough but do, on the other, mainly protest against those things I would consider to be secondary to the show. It really shows that it is an attractive show to many people and also that there is enough to it for people to discuss what is the main topic or focus of attention.

There are, in all, a lot of anime and manga out there that manage to maturely address quite a variety of themes, even if the emotional stress might sometimes be somewhat overbearing.
Noticing that you only quite recently joined MAL and assuming that your list is still a work in progress, I'm not really sure what to recommend: I'm not sure what you have seen already and what you would like me to put emphasis on. For instance, if you want a background setting that is rather meticulously detailed and has quite an impact on the foreground happenings, I could recommend the Nausicaä manga or the Seirei no Moribito anime; if you like a distinct focus on the world before the characters, there are the Aria and YKK manga; if you like to have a fresh take on what are, in essence, mere tropes, there are Princess Tutu and Guin Saga; if you want a show where it slowly dawns on you that the clichéd foreground is completely constructed by the background, do go watch Simoun. These are just a few of my favourite titles, mentioned off the top of my head. With a few more specific constraints, I'd probably be able to be less random.
All Comments