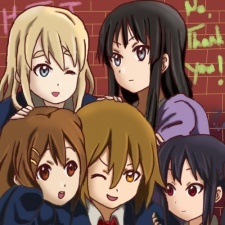 umjis Sep 5, 5:03 PM
damn nearly a decade since you were last online

Chris-chan01 Oct 9, 2010 5:13 AM
Heyhey. New infos from MiTSU club. An picture contest starting tomorrow. As a cost, there is a unique limited edition member card. So take a look or be part of the contest by enter it ^^ Shizumi Sep 28, 2010 7:45 PM
hell yeah!! it was just too perfect! maybe I'll forgive them for not including Ritsu's boyfriend chapter....... or not XD
and to fulfill my happiness, THERE'S REALLY A MOVIE!! Athyra-san, your words are really something XD

a movie? wow, it would be awesome :D but I'm also fine with an OVA, just hope they animate that chapter in the future ^^'

lol, it was really diferent than what I expected XD

and seems the last extra will be


based in the chapter the girls go to visit Sawa-chan's house... so we won't see Ritsu's boyfriend chapter after all? oww...

and the extra will be with Azusa and her friends... seems it'll be funny ^^

*I'm in tears now*
ow, Azusa-chan, waah, everything about this chapter was so damn cute!! I also loved the first and last panels, soo cute!! ^^
The YuiAzu moment was really lovable too... I wanted a little more Mitsu, but I guess it can't be helped ^^''
I really can't believe it's over... T_T aaah, I'll miss K-ON! ...

U&I is such an adorable song ^^ can't stop listening here too.

hmmm... seems HT already got the raws, so I'll wait the chapter properly translated, since is the last ^^' ;_;

Yep, I've seen Fate (Tohsaka Rin! ♥) and Tsukihime ( I was utterly depressed watching this one, I hated the ending episode T^T I cried so much watching it ;_; ) Amazing ending songs :o I actually already downloaded Kyoukai but I haven't gotten to the actual task of watching it since I've got so much on my to-watch list. D:

Lmao haha Mio with a katana! XDDD Yeah, TOTAL OPPOSITE indeed. XD Ritsu will suffer greatly if Mio is like Yomi :O she'll definitely get more than a hit on the head. XD

So is the beach far from town o_o You said it's a small one, so normally, it would not take that much time to go there by bus now, would it? Of course, that's if the beach is in town, not only close xD

Lol, punk is cool. I like the shirts and the plimsolls /lol @ dictionary, that's the first time I hear that word, but you know exactly what I'm talking about, I think xD In GTA SA they are called hi-tops o_o Anyway, the shoes, man, the shoes! :DDD/ :3 I guess I'm in that phase now, though I like T-shirts with cool sayings on them, or ones with some hidious cartoon xD I just wear what I like, and that is deffinitely not the clothes that are now fasion D: Too flashy for meh.

Yeah, democracy ftw! D: Though the country is so poor now, it's for the best.
That's a rather interesting way to get into anime xD Go you! :D
I started watchin because of Yu-Gi-Oh and the Abridged series of it, I guess. One shounen let to another, it let to a forum, where I made some friends, they forced me to watch something different for a change /it's rather tough to make a Narutoshounen-tard watch something else, believe me. I know I've tried, and I convinced only a few xD/ Most of the newbies hate us for this, the brainwashing is at an incredible level!!

p.s. I'vefinished AB! I'll tell you more about it next time, because this is going to be one hell of a wall of text D:

rusette Sep 7, 2010 8:50 PM
Raijin! The rival madogu of the Fujin! <33 All this Flame of Recca stuff reminds me of that epic 2nd ending song. <3 Dorothy was the kid at the doll room right? Gaah, I've seen this anime way back when I was still in highschool, D: my brain is having a hard time recollecting the episodes and stuff. XD

Omg, episode 9 has Mio x Minna moment?? *DOWNLOADS* It's about time. I've been waiting for this. D:<

Shiki in Kara no Kyoukai (did I get that right), eeh, I still have to watch it. Is it really good? :o

Yomi~ She really reminds me of Mio. Lol. I mean with their names (Yomi Isayama/Mio Akiyama) and their almost the same appearance. XD

rusette Sep 7, 2010 4:24 PM
Oooh that Raiha guy. *thoughtful* Hmm. Yes, they make a good couple too. And Raiha's kinda cute too. :3 If I remember correctly.. they met err.. that time when Fuuko's about to drown under this sort of underground facility? Did Raiha save her? *omg memory gap* D:

It just infuriates me to no end that Fuuko seems to always seek Recca's attention. Fuuko-chan, you already have two hotties waiting in the line, stop focusing on that damn fire kid. D:<

*sigh* Oh~ I'm watching Strike Witches (Season 2) too~ :3 Mainly because I want to know what will happen to MioxMinna (so far no developments, which disappoints me so) and my ot3 GertrudxMinnaxErica. <3

Heeh.. considering how they did Aoi Hana and Sasameki Koto.. never mind whoever produced them, I found both sooo boring. The manga was so much better. If they're going to make an anime for GF they better NOT mess it up, I'm going to call Erza Scarlet and let her beat them all up. >_>;

hey, you saw that pic?