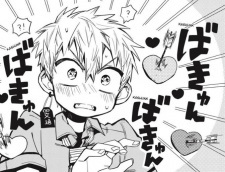 it's a ZackRay discord; And NICE avatar; I just read Last Game this past summer xD loved it.

kyoudai Sep 8, 2016 11:50 PM
There doesn't seem to be a perfect answer for that, huh... I decided I was going to start doing all my art digitally, so I picked up Clip Studio (which is really an awesome app, by the way), but there's just something about working digitally that I have trouble getting used to.

There's maybe one or two people who don't, but definitely not many. hehe I'd say that he's more kuudere than tsundere. He likes to play with people like a tsundere, but his attitude toward others is more like a kuudere: cold, blunt, cynical, sort of "you're going to die if I don't help? sucks to be you, I guess" -- but is actually very caring inside and is likely to do something anonymously to help the people he cares about. Like a tsundere, kuudere's say one thing and mean another, but the "tsun" in tsundere means snarky or harsh, while the "kuu" means a cold and uncaring exterior.

kyoudai Sep 6, 2016 9:58 PM
It can be kinda messy, but when you get what you want, darken the strokes you like and trace it over to another page. :) It stretches different drawing muscles, so I think it's a good exercise at least from time to time.

Definitely, but we love him for it I guess. hehe

kyoudai Sep 5, 2016 3:17 PM
I always did that too. The first time I drew in pen, I realized something: I was more "ok" with having stray or imperfect lines when I wasn't able to erase them. I'm a bit too perfectionist for my own good, so being unable to erase "wrong" lines was a little difficult to deal with at first, but as I kept doing it, I realized that I was making better drawings because I wasn't concentrating on making each stroke just right. I was concentrating on making the picture as a whole look how I wanted it. Have you tried something like that before? You may hate it at first, but you may also find that it's just what you need to take your drawing to the next level. Or maybe not. Each person is different.

Aha, that is a cute one. :) Though, I can't decide... I think I like Karma's teasing look better than his being-teased look. Maybe it's because I'm just a little bit of a masochist. He's so sexycute when he blushes like that, but that tongue..! Tongues just do something for me. And the shape of his is really, really cute. And Terasaka looks kinda, well, creepy in that second one.

kyoudai Sep 5, 2016 5:54 AM
That's mostly all I do on Pixiv too. Most of my bookmarks are public if you're interested in them. Thank you. I began knitting last August (13 months ago), but for whatever reason I picked it up quickly, and I've been working on socks all year long after it was my New Year resolution. I'm finally at the point where I can make them fit just right. Knitting just kinda clicked for me when a lot of other things didn't. I occasionally get frustrated with knitting when I have to rip out thousands of stitches (or worse -- redo the whole thing) and I can't seem to make progress. But every stitch I knit is that much more experience and practice, even if I do have to rip it out eventually. So I look at it like that. I think the frustration is what makes things fun though, because when we overcome it, it makes our accomplishment feel that much greater.

Yeah, Koro-sensei was a bit too mean to him then, so I'd probably want to hug him and defend him too. Though, since I once did the same thing that Karma had in that situation, I think Koro-sensei was also right to call him out on it. There were a lot of times when Terasaka and Karma bantered with and teased each other, though usually it was Karma giving it to Terasaka. Do you remember which episode you're referring to? I'll look it up.

kyoudai Sep 5, 2016 12:46 AM
I love that MAL keeps a drop list. You can go back to it you can decide to give things a second chance. If you didn't keep track of your drops, you might totally forget about them. I would anyway. I also enjoyed Clannad, though I felt like it could have been better as well.

I was barely seeing any improvement in my art after working on it for years, but it was still encouraging to see that I had improved that little amount. It just wasn't my thing, I guess. I picked up knitting very quickly and feel like I can become really good at it if I keep working on it. Hopefully art is the same way for you. Do you post your art online somewhere? I'd like to see it if so. There's a link to my Pixiv on my profile. There's almost nothing there, and it's all old and bad. Here's some of my knitting, though.

Yes, he was adorable in that scene, seeing his calm, nonchalant exterior being peeled away by Koro-sensei. Couldn't decide whether I wanted to hug him or tease him lol.

kyoudai Sep 3, 2016 5:41 PM
Yes, I think it's important to carefully consider how we spend our time. I try to do a little bit of everything each day, not just all anime or whatever. I've dropped plenty after a single episode, but I try to watch for at least 3 episodes. I dropped both Psycho-Pass and Shinsekai yori after the first episode, and later realized that I might actually like them. I'm glad that I did give them a second chance because they were both really good, and Shinsekai yori turned out to be my favorite anime ever.

I think my experience with knitting has been similar. I've tried a lot of different hobbies -- or, really, I pretended to try them. But one day I realized that I don't really have anything to show for all the time I spend on anime and games, and so I bought some yarn and needles. I fell in love with it, and I do some knitting every day. It was hard for me to make myself draw something every day, but not knitting. I look forward to it.

So even if drawing turns out not to be your thing, something eventually will be. Just keep trying new things and you'll find it. :) And you don't really have to be good at something to enjoy it. But you do have to enjoy it to get good at it. So make sure it's something you enjoy, and then you'll want to spend more time working on it and before you know it, you won't believe how much you've improved. I look at some of my knitting from when I first started, and I have to laugh because it was SO BAD. But that just means that I've improved that much, and that makes me feel good. ^_^

If I were someone who could pick good anime from bad ones just from the synopsis, I'd not have watched nearly as many. Most of what I've watched were pretty mediocre, a few were horrible, and a few were really outstanding. But I have a lot of time, so even though I may watch 30+ series at the same time, it's not a huge deal for me. And when I get bored of something, I drop it. I've actually dropped series with only 1 episode to go just because I was tired of them. Probably I should've dropped them long before that, but I'm kinda slow sometimes I guess.

I also got into drawing around the time that Bakuman came out. I think everyone started trying to draw around that time, lol. I kept it up for a few years, and at one point was halfway decent. But never good, much less great. Eventually I gave it up like photography and writing, and last year I took up knitting, which has been a real revolution for me. It's my "calling" I guess, so I spend a lot of time knitting that I used to spend watching anime and gaming. With simple knitting, I can do it at the same time I watch anime (which is what I'm doing with KKM since I've seen it before already), so that lets me do two things at once. :)

kyoudai Sep 2, 2016 9:20 AM
It's a different story from Tsubasa Chronicles, but they're related. In Tsubasa, you briefly meet xxxholic's main characters, Yuuko and Watanuki. The xxxHOLIC story is sort of like Fukigen na Mononokean, but also not. Ashiya and Watanuki are very similar characters (at least at the beginning), but Yuuko and Abeno are quite different. xxxholic is a bit more playful. It's definitely worth watching if you enjoy(-ed) Tsubasa Chronicles and Fukigen. The best part about Tsubasa Chronicles, though, is the music. Wow. That's the soundtrack that turned me on to Yuki Kajiura, who's still one of my favorite musicians.

kyoudai Sep 1, 2016 10:57 PM
Nice list of favorites! Killua has probably been on my list also longer than anyone else. I still have never seen Card Captor Sakura, but I really liked Syaoran in Tsubasa Chronicles/xXxHoLiC.

kyoudai Sep 1, 2016 2:18 AM
Hello again. 😀 Thanks for the request. You don't have Karma in your favorite characters? 😮
All Comments