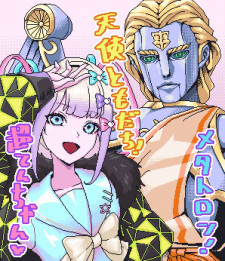 euford Sep 23, 2021 7:26 AM
Hello, thanks for accepting the FR!
The person of the picture is Yuuko from ef-a tale of memories/melodies.
The graphics and songs are great (made by the studio Shaft!), and it’s one of my favourite anime :D

SANTI4GURI Jan 3, 2021 5:24 PM
Yeah I thought you were dead tbh. Also I do remember the challenge, I'm just to lazy to look within the hundrends of anime that you have seen and I haven't.


btw I'm not a psychopath the decade started on 2020

My writing gets very dry when I speak about philosophy, unfortunately. Call it academic defect :D. I hope it was at least clear :). As I said, I would love to discuss with you, if you want. Haruko Ichikawa really knows how to make a story, it is very fortunate that the creators of the anime understood how and what she wanted to present, building on it with CGI animation. Both the manga and the anime are great works of literary and visual art in my opinion. Something which is rare to see even in a medium, intensely influenced by new ideas, such as the manga and anime industry.

My thesis and I are in a battle royale right now, but what can I say... sometimes the dragon slays you, and sometimes you slay it. This is especially true if you want to present and defend certain ideas.

Write when you want and can :) See ya.

_Morpheus_ Jun 9, 2020 2:46 PM
This is probably going to be the latest response you ever received, but it's better to be late to the party then not coming at all. :D

There is a lot to be said about this anime, but we can start with your answer. Theseus's ship presents the problem of identity in relation to change, which can indeed be considered a central theme in the anime. But there is this thing about the continuation of identity - it can be viewed in two ways. You can say that something persists or perdures. Let's say that something persists if, in one way or another, it exists at various times. In other words, it remains a totality of its qualities, be they substantive qualities, relational qualities, or contingent qualities(you can argue that this applies for all three or, at least for one type). On the other hand, something perdures by having different temporal parts, different stages, at different times, though no one single part of it is wholly present at more than one segment of time. That means that the object is never totality in a temporal sense, that it is only partially what it is at every time. Persistence requires a qualitative identity, while perdurance requires a causal identity(that every temporal instance of the object is causally related to each other). Now you can say for Theseus's ship that it persists through time because some or all qualitative aspects of it have temporal persistence. For example, it retains its relational qualitative of being owned by Theseus, it still retains its substantial quality of being a ship and it retains some contingent qualities, like being made out of wood. The ship also perdures, because the 2.0 version of it was built on its 1.0 version. Can the same be applied to Phos? Well... there comes the mind-body-gender problem in a sense. Obviously she\it\they retain a form of sentience through every change if nothing else. But how is this sentience physically tied to their body? Are they the crystal, the network of micro-organisms retaining and(maybe) generating their cognitive functions, or is their sentience an emergent property of the interaction between the two? There comes the problem of identity of qualities. Are we talking about the same quality at each iteration of the same object, or between causally unrelated objects? Are qualities universals which "connect" to all the objects exhibiting them, or do they exist "within" the object? If the latter, how are they connected to the physical or abstract nature of the object possessing them? Even putting these problems aside, however, I would argue that Phos at least perdures through their changes. They are the same Spatio-temporal object, which is partially iterated at every instant.


Now imagine that the Lunarians found a way to end their hunger for gems, by making perfect copies of them and taking them, instead of the originals. Now also imagine that the originals got annihilated by a meteor, vaporizing them in their consistent atoms. Would you say that the copies are "them"? :P

We can discuss more, but that's it for now. Have a thesis to recheck for the thousandth time. :P

it's 4:36pm in malaysia as i'm writing right now

tbh this pfp is one of my fav pfp i've seen, idk why but it has it's own charm to it haha

I only found 1 of the same pfp of monster from youtube (yeah my youtube channel has the same pic as MAL, and i don’t have any content in youtube lol), the other user’s youtube name is Riptide (you might find Riptide in openings i think). I haven’t found users who have the same pfp in mal tho.

Karhu Mar 11, 2019 4:55 AM
Essentially, I am being told there are only 10 different tiers of series among the 3000 animanga I have completed. Since average is what most things are by default, I would need to hit at least 1500 of them with a 5/10 for other ratings to mean anything. Even if I thought differently about the scale, at the very least I would need to give 300 titles the same rating 10 times over. And among each of those 300, there would have to be at least another 10-digit scale since, otherwise, they just pack up into this grey nothingness where all of them are the same, according to ratings. And that is what is happening now since there is no secondary scale.

it has some of the best character writing i’ve ever seen, crystallized in the timeless banter between Holo and Kraft, the main duo. the atmosphere can go from comfy af to dark to haunting, the background art is just gorgeous (in s1 especially, the studio change for s2 really hurt the show), and after all is said and done, the main action of the show is literally medieval macro and microeconomics with some background religious commentary and fantasy elements.

spice and wolf for sure has some of the best and most engaging dialogue ive ever watched in a show, anime or otherwise, and it’s that (and subsequently the dynamite chemistry between Holo and Kraft) that is the soul of this show.

it’s definitely one of the best slice of life shows out there, friendo. sorry i rambled a bit here and it must not make much sense but i just love spice and wolf haha

interestingly enough, all three of its adaptations (anime, manga, LN) all have diverging plotlines so if you really get into it, you’ll be experiencin something unique each time
All Comments