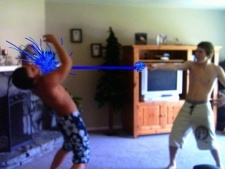 SlickD Jun 17, 2015 3:40 PM
I saw your comments in the Terra E forum lamenting how little appreciation and recognition the masterpiece gets. I feel bad though that you haven't finished Logh, and I know that it would be hard to jump back into things after a super long hiatus but you are really missing out by not completing it.

Moreover, I have some questions.
First of all, the endings of the FSN visual novel and FSN realta nua are the same? I mean the second one it's said that has some changes, this changes are in the endings or what?

Second, Are all the endings of the visual novel bad endings? How many endings are in the game? Can u explain me shortly every one of them?

Finally, i wanna know if there's some good ending, i mean, where saber an Shirou end together.

Thanks for your help!

owell11 Sep 7, 2010 8:00 PM
I see,ill be sure to continue my homework before making a final decision,but form what you're saying and a few other people,it doesnt seem to be too game breaking of a system. Also,are there any race specific traits,or differences between races as far as certain skills go?

Jay_Ox Sep 7, 2010 7:53 PM
Actually I have watched the original NGE but I guess I never added it. I haven't watched any of the other NGE material yet and have to pick back up on MSG Zeta here soon before I forget too much of the plot.

As for FFXIV I would go with a caster class or maybe...maybe an archer. In FFXII I played a WHM with BLM or SMN as my subjob and enjoyed it. In WoW I played a druid.

*edit* I just checked my list and I do have NGE on it. I scored it really low though because I hated the ending.

owell11 Sep 7, 2010 6:48 PM
I see,so you have the choice to continue leveling a class after the EXP nerf right? how badly does the effect your experience gain,and does it also apply for completing quests rather than just killing mobs?

Also i noticed that they took out auction houses,is it basically just bartering and creating your own weapons and gear?

owell11 Sep 7, 2010 2:40 PM
I can see how that is helpful for people without alot of time,but there two major problems with the system. One of which being im not playing FF14 casually,i played FF11 for a veeeeery long amount of time and quite literally about 10-11 hours a day. If i cant level the exact class i want for as long as i need to reach certain goals (along with my friends who are throwing their lives into this game) whats the point in calling it an MMO?. The second major problem with it,and this is more a question of morality, im paying a monthly fee to Square Enix to play this game and theyre telling me how to spend my time.

Personally,i think its all a front because they havent finished the end game content for it,and they will most likely take it out when they are done (claiming it was because of its unpopularity). The game looks fucking fantastic,i dont want something incredibly stupid like this ruining my most anticipated game of all time. I understand the importance of leveling other classes,since i had to level up White Mage and Black Mage for my Bard and Red Mage,but that took less than half the time AND i wasnt being restricted by 8 hours a week per class

Also you forgot my second question,HOWS THE FISHING? do you get your own song for when u fish?

and more importantly,hows the fishing?

but i noticed that you dont have one piece on ur list at all....? whats up with that? you a racist? o_O .... nvm XD.... but just try that for a few eps, it seems like a ginormous undertaking, but if you end up liking it (which i did after the first ep) then you'll catch up in no time.

as a side rec, ive been in love with skip beat, and maybe you could try ouran high school host.

but yeah, i dont think any lover would approve of the amount of time i spend on anime and dramas unless they too were a big fan of it, so i had no choice but to end up with an "otaku" ^_^ im just lucky that i actually love him o_O
All Comments