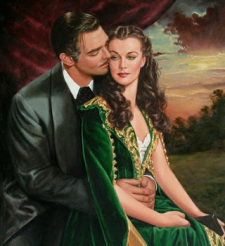 Adnash Aug 29, 2020 5:03 AM
I haven't read the novel, but I saw its iconic movie adaptation we are talking about several times.

Agreed, no need to making any remake of this movie or touching it in different than solely technical way (like re-releasing it in higher resolutions etc.), because this movie doing need any further improvements and is already complete. Going back to the hypothetical remake, like you said the movie is already perfect and doesn't have to have a new version. It is one of those movies that can impress the audience no matter of time in which it is aired. It can impress modern viewers in the same way as it impressed people who watched it back in 1939. Therefore other than technical improvements (like mentioned higher resolution) wouldn't be a good idea.

Besides, I don't believe the creators of remake would find a cast so talented as it was in the original movie. From minor roles to iconic roles played by Clarke Gable and Vivien Leigh, everything was so polished that it makes you think that it's nearly impossible to find similar group of people who would put so much heart and devotion to a movie.

I know that list of the highest-grossing films and I do know that "Gone with the Wind" in number one highest-grossing movie of all time if we adjust inflation. I'm glad this movie is top1 on it, because it really deserves it. By looking at today's rise of prices worldwide I think that "Gone with the Wind" has high chances to remain at the highest position for a long time. ;p

Adnash Aug 28, 2020 8:03 AM
I've just noticed your new profile pic. "Gone with the Wild", such a great movie. Even after all those years and by today's standards it still deserves to be called as a masterpiece. :)

Adnash Aug 9, 2020 12:07 PM
I decreased myths score I gave to KnY from 9/10 to 8/10 because of the final fight. It was too long, left some questions unanswered, and felt dull at some moments and basically I could pick at least several (sic!) other fights from this series that were better than the final one. While I liked this original approach on the epilogue, I found this last battle as mediocre. Not essentially bad, but average especially compared to the previous fights. Though I must admit, it had some awesome moments that weren't present in the previous arcs. :)

Adnash Aug 4, 2020 12:29 PM
Hey, how's it going? :) I see that lately you have finished reading KnY manga. What so you think about its final fight? :) From what I noticed it is one of the most controversial parts of this manga, if not the most controversial one, because it quite divided the fandom into two main groups of those who enjoyed it and those who were disappointed by it. I'm quite in the middle, haha.

Adnash May 23, 2020 10:29 AM
Good to hear! Of course, no problem - you have still about half of it to read, so no need to discuss about the whole manga and risk seeing any spoilers. ;) I can only say that it gets even better later, hehe.

Black_Sheep97 Oct 24, 2019 6:43 AM
What are your thought on vinland saga direction and animation so far?
All Comments