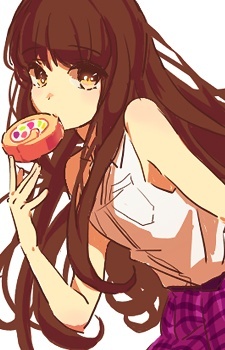 Playcool Jul 3, 2016 1:32 PM
Lucia was the one with lesser screentime too. I could get in all the negativity I have for it, with the 13 episodes and Kagari original route only, but that would make me feel bad, since some performances were soo good (Shizuru, and Kotori too). What can we expect is that we wont see many or any at all, of the scenes from Lucia's... and to be honest while I want the fanservice of seeing something like the mall adapted, it would be insulting to take that off from the context we have in her route...
At this point I really hope with this trend, mangakas keep doing more Rewrite manga, and maybe one spin off that follows Lucia route??

Playcool Jul 2, 2016 8:24 PM
Hello dear friend, so how did felt about your dear (and mine) avatar being adapted? I got to say, that grrrr just nailed it!

Playcool Apr 27, 2016 4:02 AM
The progress seems to be stalled for months, I remenber a while ago watching it, and seeing that all the dialogue for the routes was already translated, at that point, I would had said "So it shouldn't be long now!"
But look at where we are now...
Well anime is coming next months so the eventual coming of HF will be hitting the sweet spot, since it is a Key VN, we can expect in the next years, to be hearing alot about Rewrite, and eventually the VN being more popular, and the arrival of the fandisc translated couldnt came at a better time.

I know that website, have readed some interesting Rewrite articles the owner previously had on his older website.

Playcool Apr 19, 2016 4:28 AM
It will, it would be ironic if they cuted stuff from other routes, just to make time and buget for a sixth one. My honest to the core thoughts about a sixth route featuring kagari, would be loli kagiri x kotarou ship and go rooth in hell. HATE IT.

It is really making progress? I would think so, I have been following the page ever since I finished Rewrite so, before it was even created and he was doing something else, and it has been at a dead end for months and months, like the translated is busy with RL stuff and had not the time to updade, well I m learning japanese, so if he just takes much more time, I will just read it raw.

Playcool Apr 16, 2016 8:03 AM
Always made sense for me, but there are some, you like soo much you just think like, how can an adaptation of this masterpiece not be GOOD?!?! (if that makes sense for ya xD)

They cant, Rewrite is one of the biggest VNs, they just cant do a Little Busters to this, it wont work, for starters when they decided to go crazy and adapt it, they should had made sure they had a big budget to start with. I hope you are wrong there, I dont want a streamlined version of the routes, it would be shit. There is no other way to say it simpler, it would be complete crap. Especially, Lucia's that Ryuuji wrote, they have to take their time with the heroine routes, I could see them skipping some stuff in kotori's and akane's but there rest...

Playcool Apr 10, 2016 7:49 AM
Well that sucks then, the whole point of me watching it was to relieve some of the best moments right? It is natural that I want them to adapt the best scenes from each route, there is no way that they will manage to do a good adaptation that builts up to moon if then dont do the adaptation of each route faithfully, I would love to be wrong, but I probably am not.

Lol, "so hopefully it doesn't turn out too badly ^^", seems you also have lower expectations too.

Shishio-kun Apr 9, 2016 12:35 AM
Hi hi, here is the animated version of the competitions bar I mentioned earlier:

Playcool Apr 7, 2016 10:19 AM
I heard that we will be getting more Lucia screentime on the common route this time around. Probably some original stuff, I dont know why they didnt called Ryukishi for that, he wrote her, he would be the best to add original stuff for her.
Also do you believe we will see her route adapted, with romance?
Like they have to develop the cast right?! So they should use the story of each of the routes, that develops each heroine, but for them to use that story, they cant adapt it all in one timeline, so it really has to go with omnibus format right?!
There doesnt seem to be another way, and if they follow this, they have to put romance obviously... it is just that this industry is so known for adaptations that shit on the original plot structure, that I still dont believe they will do this with that format.
I think that if Rewrite was not a Key VN, they would never bother to adapt it, because if they want to get some quick cash, being lazy by not producing an original story themselves, and just adapt some stuff at their leasure, I guess they choose the wrong material, because Rewrite is like the only VN I see, that restricts them to do things well, because you really cant mix it up, this is not a little busters where you can fit everything together, you have to do stuff properly to have at least something decent.
So or this is a love letter to the visual novel fans, or an insult. I cant really see a midground for Rewrite, they could go common route, and then moon and terra, that would be the most lazy outcome, but that wouldnt bring any of the development needed for people caring about Moon's... they would also be missing alot of important details the heroine route had.
I m getting a really bad vibe now, imagine they join those details somehow, with common route, moon and terra... the more I think about ways they could mess up by being lazy (having the courage too being that lazy, to anger the fanbase), the worst it gets. Damm...

Well there is something I almost bet they cant mess up with, the OST, since it seems they will use the VNs, which is a great choice.

Shishio-kun Mar 20, 2016 6:20 PM
Hi Ichigo-Sora, remember when you won my list design comp back in 2012- well I have ranked you as the contest champion on the front page of my club wall near the bottom (red bars). I used an Akemi pic since I saw you liked her. Let me know if it doesn't look ok with you and I'll try to change it to something else. Thanks!
http://myanimelist.net/clubs.php?cid=19736

Also if you want, I can make you an animated bar for that which can be displayed anywhere and will feature the club name on it. Just let me know if you want it and I'll set it up for you.

Most of them are already translated, you can even find them on Steam for sale. xD

Muv-Luv series will also came to Steam soon, Extra will be at end of March, Unlimited by end of April and MLA by summer or fall. Also some of the fandisks are being translated and also put to sale on steam later on after MLA.

I see you have played Narcissu games, I have yet to play them, I supported the kickstarter project so in the near future I m going to have all four to play. Without spoiling, what are they really about?

(so true to that club thing, I just keep receiving invites and more invites to clubs... when I was not on MAL for months, most of the emails on my box were from those)

Jiharo Dec 6, 2015 5:31 PM
OMG could you tell me where do you find those lovely pictures for the posters you made? Did you draw them on your own or did you find them on the web? Cos honestly speaking, I find your work the best among all the graphic staff! The ToC Final posters was so awesome I can't express it in words! Do you have any secret you can share on how to make something this awesome? :D

Sorry for all the questions but I really love your works. It's so cool. Found myself to be a fan of your works already :D

Jiharo Oct 29, 2015 10:23 AM
Thanks for making such awesome pictures! Your design are wonderful :D
All Comments