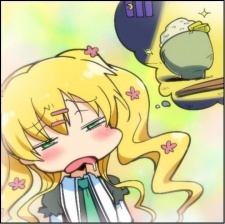 I'll reply to your other comment soon, I promise!

nooo I didn't get to go with my uncle, maybe another day :<

buildknuckle Mar 7, 2015 8:20 AM
Yeah I keep changing it along with my profile picture. My @ name isn't changing though.

ZetaZaku Jan 24, 2015 6:57 PM
Damedame Milkies are the best thing in existence, together with Twenty.

Excelsior Dec 22, 2014 12:48 AM
Thank you so much for the tip! Watching episode 40 wouldn't have been the same without that context (also yep one of the best episodes. imo Sharp episode 40, the mother's day episode, the Sharp finale, and Onpu's last episode of season 1 are the best episodes thus far)

Yeah, I actually think it did dethrone Tutu for me as well. I started Motto and though I''m not overly keen on the first several episodes so far, they're still good; I've heard it gets even better down the line (really excited to check out Naisho, too!)

Yes, actually I agree. I had some misgivings with regards to the first half of Sharp, but they were absolutely washed away in the second. Sharp very much made me like the main cast even more; seeing them being so caring, dutiful, and giving towards Hana-chan made them even more likable. The episodes concerning the conflicts between the main characters were also some highlights of the season.

Yep, Onpu the best, she's still awesome. Her first season arc was terrific, but now that that's all done with, I have mixed feelings towards her. She doesn't have as strong an arc as the other Ojamajos who have some central conflict guiding all their episodes (Aiko's parent's divorce, Hazuki's passiveness, etc.)

I think the baby tests are still my main complaint of Sharp; the tests are pretty slow and boring. I don't find the focus on the OctoSquid baby and Ojamajo tester's babies to be that interesting. The tests can be pretty mundane and not as creative or varied as the Ojamajo tests. The Octopus' gags gets old quickly. And I remember lots of little scenes that go like, "Testers explain tests -> Ojamajos discussing how easy/hard it will be for Hana-chan," or "Hana-chan doesn't do required task -> Ojamajo's say 'Oh no! Hana-chan isn't doing [x]' -> Ojamajos pondering" and etc. It's also weird how there's such a strong emphasis on the fact that all babies develop differently at their own pace yet they're all taking standardized tests. It seems like I'll 100% enjoy the tests in Motto, though. There's less of them, they're structurally flexible, there's a huge character-focus while additionally fleshing out the lore, etc.

lol now that I'm so late in replying to this I'll just say, with regards to comparing season 1 and Sharp, I like the latter more, I think. The first season was a great setup and Ojamajo has one of the strongest sense of community I've seen anywhere. I felt Sharp had more flaws, but it was even more emotional than the first season and had higher high points. How are you liking Motto so far?

mastermomin Dec 21, 2014 7:04 PM
I'm actually on holiday right now in Thailand. I'll be back home on the 24th so maybe sometime around then?