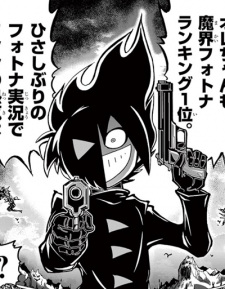 joshuad2002 Feb 4, 7:50 PM
I respect your bio. it's nice to see more hardcore fans out there. not like those poser normies who jumped on the my hero academia ban wagon. you have very good taste such as harlock, lupin,etc and your milestones are amazing. you've seen way more than me. you are truly an otaku I aspire to be.

Hibbington May 7, 2018 11:57 AM
Greetings Furrett I recently gave you a invitation to a couple clubs.
One being a seasonal club, one being a newly formed club where we recently completed our second Best Boy Competition.
I tend to like to start a conversation with everyone I invite instead of just giving you a random invite.
*If the invite doesn't go through just message me about it*
What was the first anime you ever watched? Then what was your first anime you didn't enjoy?

Sjo Jun 9, 2017 1:19 AM
if you enjoy watching less popular shows with perhaps a pinch of wonder to them, you could try kyousou giga (tv). it's not as old as some of your favorites, but it's definitely unique and amazing.

jakov Mar 15, 2016 12:54 PM
Your review about 009 Re:Cyborg is shockingly over-simplified, sloppy and thus appalling! We users expect a neutral opinion about reviewed Anime so we can decide whether to see it or not. Now, I understand that you're too young and heaven't read works of historian of religion and philosopher Mircea Eliade or of neurologist and the father of psychoanalysis Freud (which was used in 009 Re:Cyborg to explain the philosophy behind the story) but even the number of Anime you've seen does not raise any reliance on the review you wrote yet alone description in your profile, I quote 'I like animes about robots, cute guys, and cute guy robots.'
First of all: Anime is written the same in Singular or Plural! So a word like Animes doesn't exist! That alone should tell you it's maybe too soon for you to start writing public reviews!
I understand that 009 Re:Cyborg was quite different from what you're used to, but it doesn't mean it deserves such public review! You may rate it with 1 in your Anime list but it's something completely different when your're making public review on which other MAL users will make their decision! That's why it's expected that those who are writing reviews possess certain background knowledge: either have finished adequate colleague (Journalism, different courses in Political, Social and Cultural Sciences with an emphasis on animation or Anime, Computer Design, 3D animation or Academy of Fine Arts) or on the other hand are Anime freaks and have seen lots of Anime, read tons of Manga and show some general interest in this field by reading professional articles and attending animation/Anime events, meetings and EXPO's!
Now, I don't want to discourage you from writing - on the contrary, but keep in mind writings should reach certain qualitative level. Do write reviews by all means, lots and lots of them to achieve that level it's only natural first ones won't be good enough to publish them.
Now about 009 Re:Cyborg, realistic score is 7 or 8, depending from scoring scale and maybe if one is a franchise lover even 6 and 9 - all the rest can cause serious doubt on the credibility of the writer! Respectfully!

"As a large fan of the Cyborg 009 series, this movie felt like a personal offense. The movie is a darker, 'realistic' reimagining on the series and its characters. This isn't inherently a bad thing, of course, but it comes off as following the current trend of gritty remakes instead of trying to understand its source material."

The RE: Cyborg movie is really more in line with Ishinomori's vision for the ending. I don't necessarily disagree with your opinion on the film, since it's an opinion, but what I disagree with is when you say that RE: Cyborg didn't understand its source material. I'm insisting that it did, considering it was just another take on "God's War", the ending arc that got interrupted several times by the author because he was lacking ideas, and was trying to make Cyborg 009 more philosophical and darker (to the displeasure of fans at the time.)

I you actually read the manga, you would find out that Ishinomori had something probably as dense as RE: Cyborg 009 for the ending. He wasn't just going to make a simple good vs evil story.