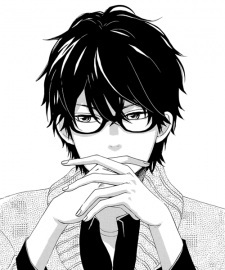 Feel free to chat with me! I tend to make late replies, sorry about that. >.> Oh, enjoy watching Black Clover! Reminds me that I should watch all of the episodes that I have missed. I'm still stuck on episode 12.

Jorbeany May 1, 2018 5:58 PM
Hahahahah you're ridiculous, did you know that? Ridiculously cute and ridiculously mine

pluvia33 Feb 13, 2017 5:37 AM
Hello! Random comment here. I came by due to your Monogatari Series: Second Season review popping up on my front Portal page. Although I'm a Shameless Monogatari Series Fanboy, your review doesn't make me angry as it might with some fans; it mostly just makes me confused on a number of points and I'm just bored enough as I slowly wake up this morning to discuss.

First, to answer your question of, "What's the point in watching an anime without a story?!" I'm not going to argue that the Monogatari Series has, like, the greatest story ever, or anything stupid like that. It's not. The point is that the series, for the most part, is not story-driven; it is character-driven. If you feel like every anime needs to be driven by a compelling story, there will just be a large amount of content that is just not for you. Sometimes it's not about having great plot lines, but just about enjoying characters and their interactions. This is a huge part of the appeal of NISIOISIN's writing. I won't try to convince you to personally start to appreciate the value of entertainment that isn't story-focused, just trying to explain its appeal. The most simple way to explain it is to embrace the concept of "it's about the journey, not the destination." For me, it is actually the opposite situation of having a compelling story but not having good characters that kills a series. If a story is great, it might be able to carry a series and make it worth watching once, but it would then have absolutely no rewatch value; that's why Death Note ranks as one of the most overrated series ever in my opinion.

Next, I'd kind of like to pose a question: is this seriously the first anime in the series that you've watch? You know, "Second Season" is right there in the name, right? Even if the Monogatari Series was a great story-focused anime, how could you ever expect to enjoying that story when beginning the series at the third anime to be released? And even if you understood/appreciated the appeal of Monogatari's character-driven nature, not experiencing the full scope of these characters' history would not let you truly understand everything or enjoy everything that is going on in the series. I get that "Second Season" is the highest rated TV series in the franchise, but it's that way for two reasons: the fact that it builds on established characters and what I call "franchise bias", the fact that a high percentage of the people watching this anime are those who have already enjoyed previous entries in the franchise. So yeah, if you haven't already watched Bakemonogatari and Nisemonogatari, there is no point in watching Monogatari Series: Second Season.

Lastly, you fixated way too much on this anime being a "Romance" series. Here's a tip for you: Putting too much stock in the Genre tags on MAL can easily result in disappointment. Yes, there are romantic elements in the Monogatari Series, but that is not the primary focus. Calling this a "romance" anime is just as much of a mistake as trying to call the Suzumiya Haruhi series a "slice-of-life" anime just because it includes that tag. So if this is the case, does this mean that you can't really trust the genre tags if you want to find a new anime to watch of a particular type? Yeah, sadly, pretty much. It'd be nice if the site had a better way to show how focused a series is in a particular genre, but it doesn't. You just have to try to find things out for yourself. Also, I could go back to my previous point of you apparently jumping into the series at the third TV entry. Even for the romantic elements that are there, you wouldn't be able to fully appreciate them or in some cases even pick up on it at all. And the bulk of the progression of the primary romantic relationship between Araragi and Senjougahara takes place in Bakemonogatari.

Anyway, I've probably spent far more time writing this than I should have already, so I'll go ahead and end things here. Have a good day.