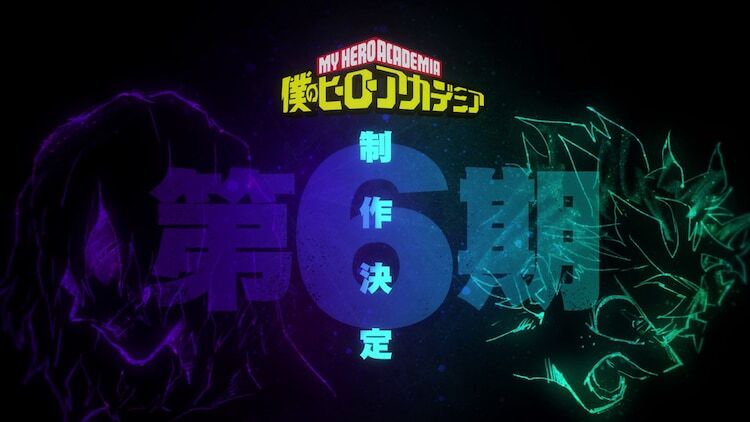 A sixth season of the Boku no Hero Academia (My Hero Academia) television anime was announced following the 25th and final episode broadcast of the fifth season on Saturday.

The anime series adapts Kouhei Horikoshi's action superhero manga, which he began in Weekly Shounen Jump magazine in July 2014, after drawing a one-shot for the 2008 Winter issue of Akamaru Jump. Shueisha will ship the 32st volume on October 4.

VIZ Media licensed the manga in English under its Shounen Jump imprint in February 2015 and serialized it in their digital Weekly Shonen Jump magazine until it was discontinued. The company's new Shounen Jump platform now simulpublishes the manga with the Japanese release. The 29th volume shipped on September 7.

I won't be watching. Season 4 was mediocre and 5 was downright bad. Maybe if I believed the studio would go back to putting effort into the anime and not non-canon movies... but I've lost a lot of interest in the story as it is anyway. It's been a loooong time since All Might vs AFO.

Wish Bones would actually animate something worthwhile instead of mid academia.

Not that excited, but hoping for the best

Nice, i like this one. I hope it will come soon.

Swagernator said:
Yo guys you must listen to me, this season will be the best. This time for sure.
As a manga reader, unfortunately, even that is debatable by many due to the very noticeable flaws it has that keeps getting pointed out, but I tend to agree.

Not surprised, but welcome news. Too bad it brings out the haters.

This anime is getting more and more deluded. In my honest opinion.

Not surprising, 5th season is bad on story, pacing and animation. The manga readers said that this 6th season is peak MHA. So im gonna have to low expectations to it

I do kind of hate that a ton of talent at bones is basically only been working on this show for the better part of a decade now. Like even if the show didnt go downhill like I though it had it is still kind of a shame to see them pumping this stuff out non stop.

Getting a sequel is always good news

I hope Bones stop giving Boku no Hero the shit treatment they're doing since season 4. If they announce a movie again next to the anime release, we already know the adaptation will suck... again. I loved how they adapted some moments until S3. From S4 on, even the OSTs are weaker and the emotional or epic moments I dreamed about to watch were not that good.

"My Villain Academia" arc was supposed to be S5 big moment. It wasn't bad but also not great. Shigaraki origin was well made but I expected more. I'll keep watching but I lost my expectations.

RobertBobert said:
Personally, I never understood this shit. They themselves understand that the sequels to the show will obviously receive the green light and even deliberately numbered the fresh episodes as 50+. What's stopping them from making it a second Naruto or Bleach beforehand in the context of duration?

Are they afraid that the status of another long-running shonen with several hundred episodes will scare away potential viewers due to archival panic?

Because this way they do not have to worry about the anime catching up the manga which means then they would have to create filler,which means more episodes.

Long running series are mostly a thing of the past,which is why only old series still do it in this day like One Piece,even Black Clover(which was made by the same studio that did Naruto and Bleach)took a break.

The shows are better this way as well,not much sluggish pacing and more consistent production scedule which means better animation.

Azuchi said:
Bones should take their time doing something else instead of this garbage but stuff that is garbage to some can be gold to others so as people get what they want, why complain.
Do you mean the series as a whole, or S5/anime adaptation? Because I can assure you there is far worse stuff than MHA. Would hardly call MHA garbage when you see crap like I’m talking about.

I don't get why some ppl think season 5 was boring. lol

as expected really this will have a complete anime adaptation

I hope this 6th season is better than the 5th, especially considering which arcs come with it... season 5 was entirely too boring (save for MVA arc, and even that had a weird tone shift in comparison to the manga that left me disappointed).