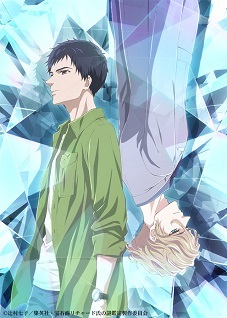 Avex Entertainment announced a television anime adaptation of Nanako Tsujimura's mystery light novel Housekishou Richard-shi no Nazo Kantei (The Case Files of Jeweler Richard) on Thursday. The series is being produced by animation studio Shuka (91 Days) for a January 2020 premiere.

Synopsis
The novel follows Richard Ranashinha Dvorpian, a handsome British jewelry appraiser, and Seigi Nakata, a bright and upright Japanese college student. The duo solves various jewel-related cases by unraveling the hidden psychological aspects of their owners that lie within the gems.

The first part of the novel series, volumes one through six, is an omnibus of short stories. The second part, beginning with volume seven, takes the form of a full-length novel.

Shueisha launched the novel with illustrations by Utako Yukihiro (Makai Ouji: Devils and Realist) under its Orange Bunko imprint in December 2015. The ninth volume will ship on August 21. The novel series has a cumulative 400.000 copies of its volumes in print.

That PV looks really good, even if it's just a teaser. I'm sold.

A good plot with two beautiful men, count me in! ❤❤❤

I was getting severe yaoi/BL vibes from this at first, but luckily it’s not so now I’m definitely intrigued by it ^_^

I love mystery and the art looks good, will definitely watch.

I now live for more mystery solving with good-looking men. I'm glad to see more works designed, written and appeal to women. Richard is so beautiful and Yukihiro Utako-sensei illustrations are too gorgeous for words. Occult Koumuin mangaka did an illustration of those two, must be a fan.

Might watch this. The synopsis sounds interesting enough for me

Since the source material's author is female and the main characters are two bishounen can we expect some undertones I wonder? Anyway I'll keep it at the back of my mind.

A crime solving mystery involving jewels? Definitely checking this one out.

Looks great. The only thing is this isn´t yaoi, sad. If were, would be perferct. But I gonna watch, anyway.

Yaoi or not, I hope it has has good mysteries and case solving. A good mystery anime is rare.

I love the original illustrator so I'm def interested.
And it's NOT yaoi.

VeelaSiren said:
this anime Yaoi or not?
i wish this anime like banana fish
nice story


Unfortunately, there is not. But seems interesting. Also, about Viktor and Yuri kiss, this is a part of a relantionship, be heterosexual or not. And it´s just a kiss, there´s no big deal with that.

this anime Yaoi or not?
i wish this anime like banana fish
nice story