Shigatsu wa Kimi no Uso, or in English Your Lie in April, was released January 2015 and has since become a fan favorite. The great care Director Ishiguro takes with his debut directorial role is apparent in the musical performances of the characters.

This anime is about a pianist named Arima Kousei that is helped through his personal demons by a bright, lawless violinist named Miyazono Kaori. There are no spoilers in these cuts of the original Japanese interview (which was quite spoiler heavy).

Oguro: I’d like to ask about your personal history first. So you started out doing music?

Ishiguro: Yeah. I was in a band as a student. In college I hosted intercollege musical events, and did some music composing of my own. I liked anime and watched it, but never even thought about making my own.

Oguro: There was another thing I wanted to ask about. Were the performance scenes difficult?

Ishiguro: They were! Really. I expected them to be difficult, but it was beyond what I imagined. For example, I learned a lot trying to portray piano performances. Firstly, the pianist and piano are immovable. and the manner you play the keyboard and what sounds come out are also fixed. So even if it seems difficult, if you try, it’s doable. Violin, on the other hand, is impossible. The instrument is fretless, so matching the right finger placements on the left hand as well as timing it with the bowing on the right hand in animation was something only a tireless studio could do. I understand why before now, there weren’t any anime about violin performances. You could say on the other hand, that we could have found some other solution instead of diligently animating all the performance scenes, but then it would be hard to call that anime “Your Lie in April”. Miyazono Kaori’s violin performances are a central part of the show, so we had no choice but to animate them in detail. So in the end, we decided to film a model artist, and edit the film to use as reference. I think the biggest role I had in this process was deciding, without consulting anyone, to make most of the scene drawn from the top-down. I have confidence that if I hadn’t done so, we wouldn’t have been able to achieve the quality scenes that we did. 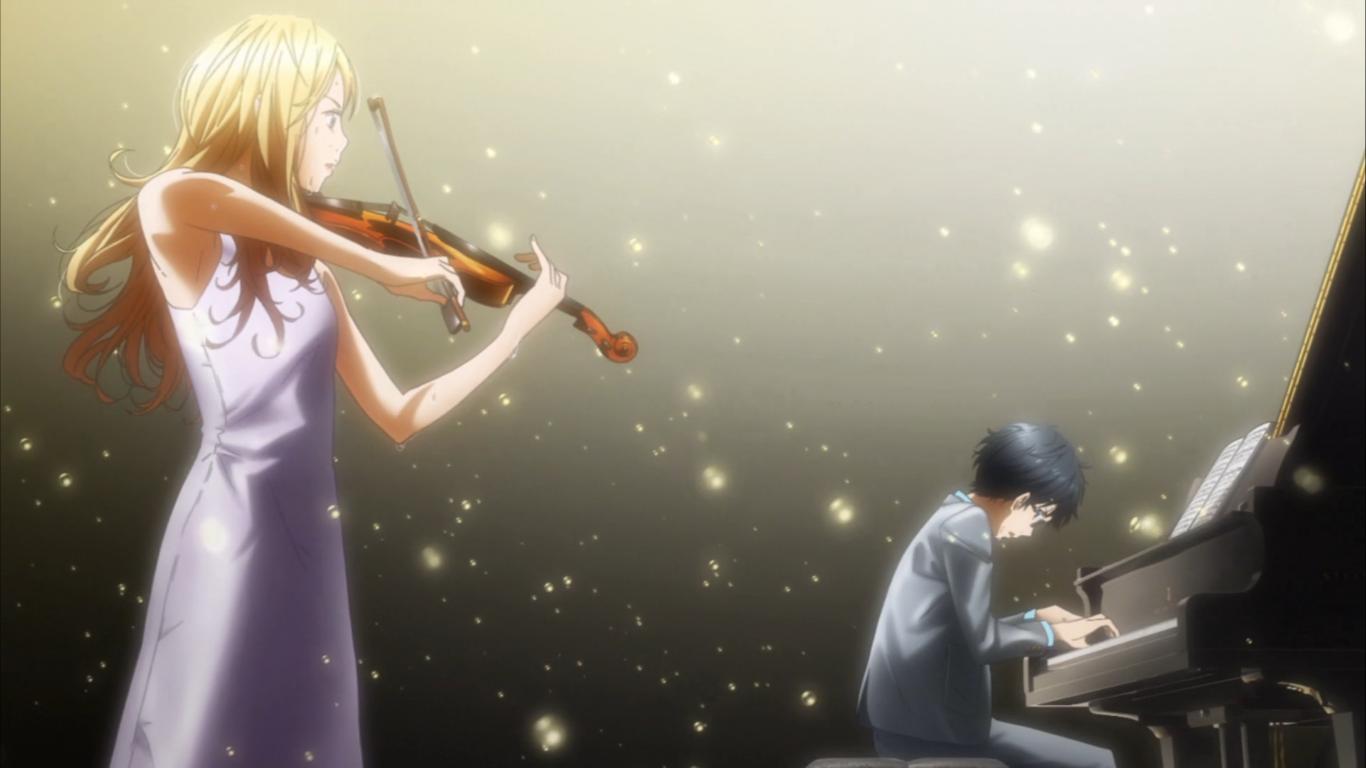 Oguro: Were the violins drawn entirely by hand?

Ishiguro: Yes. Well, we made rough drafts using 3D renders, but the final drafts were all hand animated. Violins are hard to animate! Organic shapes like that are okay to do if they’re still, but if they move or have moving parts, it becomes difficult. That’s why we determined the positioning using 3D first. You also have to worry about the scale of the violin compared to the player, as we have many different people working on the animation. I left these tasks up to Asaka Kazuyuki. He didn’t do cleanup on the final draft, but instead looked over the rough drafts. Much like an action director. 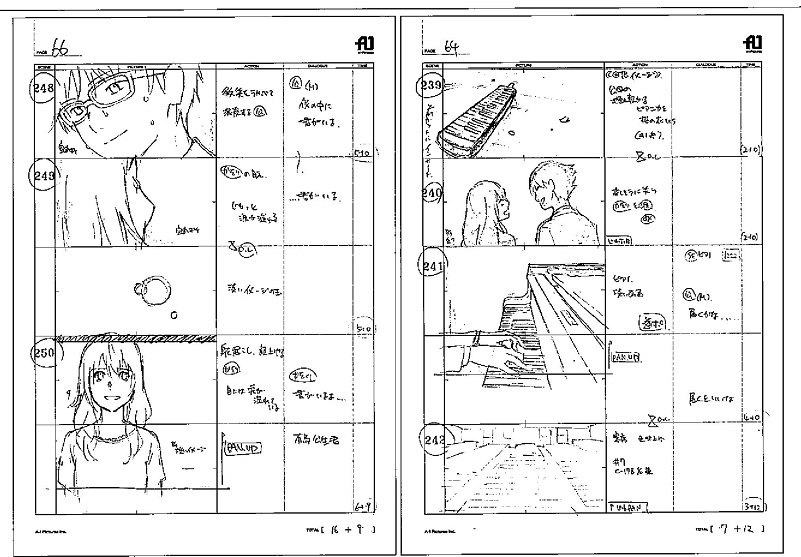 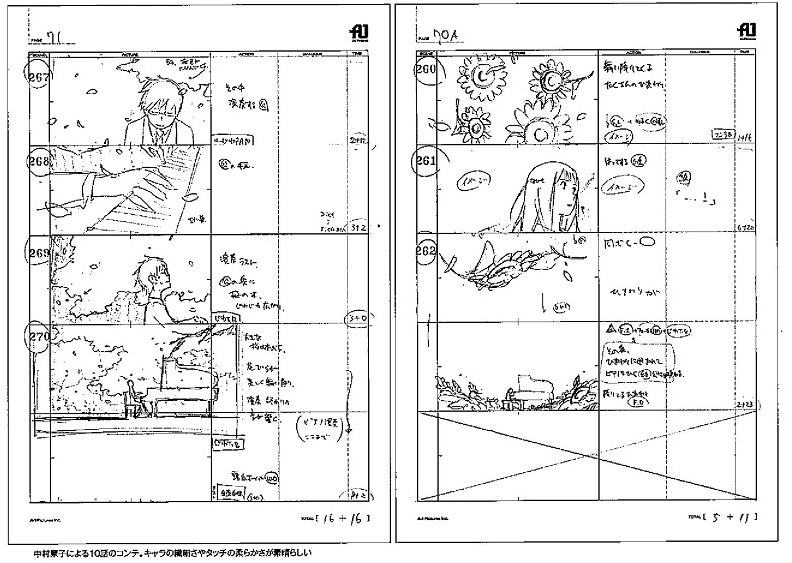 Oguro: So his job description is “Director of Violin Animation”?

Ishiguro: Something like that. He also made sure that the piano scenes properly matched up to the music, like whether the correct keys were being pressed in the frames, and gave feedback on whether the performance was emotional enough.

Oguro: By the way, can you play violin or piano?

Ishiguro: Not at all. I played guitar in my band, so I understand the feeling of playing a string instrument though. But violin and guitar are completely different things, and it was hard for me to grasp the feeling of holding a bow in my right hand to play the strings. So I did a lot of research.

Oguro: Going back to the previous topic- do you think there were any merits to animating violin performance over filming it?

Ishiguro: Well, most of the time we tried to stay faithful to the reference video, but there are times where we took artistic liberties in order to capture the overall feelings. Especially the bits with fast violin that go like “tarararararaaaa.” In the reference video, the bow movement is extremely fast and small, so it would have been really hard to see in the animation. 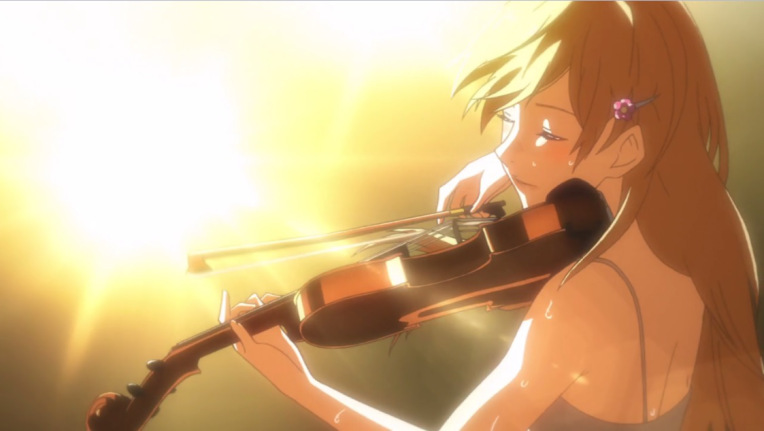