Shokugeki no Souma proves this week that you can go home again - though it does take a little bit of Tootsuki Academy back with it. 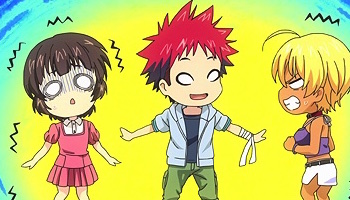 I really need to stop watching this series before bed. 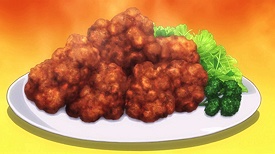 Among readers of the Shokugeki no Souma manga, you hear the "Karaage Arc" talked about with something like reverence. It came after the section of manga I've read, but it's hard to avoid the subject in any discussion of the series, and last week's preview was met with loud squeals of delight by legions of readers (who were apparently worried that it would be cut). So I was looking forward to this week's episode with a good deal of enthusiasm. 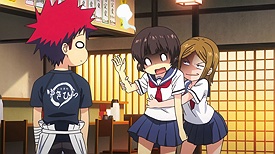 Turns out that feeling was warranted, though truth be told Souma has been on a roll for a pretty good while. As strong as the last several episodes have been I think J.C. Staff was smart to insert this story now and give us a little change of scenery before the routine at Tootsuki got a little too routine. I also liked the idea of Souma-kun getting a chance to make a go of it on his own at Yukihira Teishoku-ya, though the exact course of the arc took me a little bit by surprise. 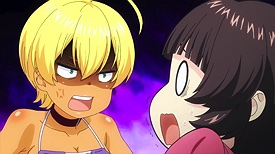 First off, those "station city" shopping complexes have indeed become commonplace across Japan, and - though it makes me feel a bit guilty to admit it - I'm kind of addicted to them. Shopping in Japan is appealing in a way shopping in America rarely is, and those ultra-convenient and attractive Ekinaka are hard to resist. And their rise has indeed come at the expense of the local shoutengai, the shopping district, which struggles to compete in the realms of price, convenience and quality. There are still a lot of them around, but many are a shadow of what they once were. 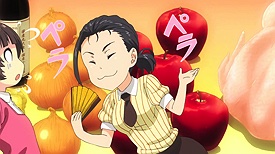 In that light we rejoin Souma's story, as he connects with his middle-school friends including Kurase Mayumi (Kakuma Ai) who we briefly saw tentacle-raped by Souma's disgusting squid in peanut butter in the premiere. She joins his already crowded harem and frankly, the odds against her seem pretty insurmountable Souma is set upon by a gaggle of the diner's old customers, desperate for a Yukihira fix, and he happily complies. But soon enough Souma notices that the district looks a lot less crowded than it used to, and it turns out that the opening of the new shopping complex at the station is responsible. 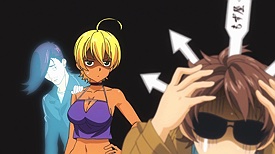 Most directly responsible, in fact, is Mozuya - the karaage specialty shop in the station, which is drawing huge crowds of customers with their delicious chicken and tony packaging. Turns out Mozuya is an import from Kansai, having started in an old Kyoto storefront, and their CEO Nakamozu Kinu (the legendary Hisakawa Aya)is personally overseeing the new store's invasion. Hisakawa delivers a knockout comic performance here, the very picture of greed and arrogance - this series has a tendency for villains of the moustache-twirling variety, but it's hard to mind when they're as hilariously wicked as Kinu. 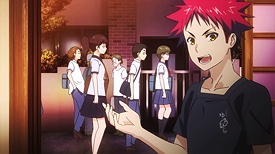 I'm going to be very interested to see how this story plays out, because there's one unmistakable truth here - the main reason Mozuya is popular is because their product is really, really good. As such, I don't think they're playing unfairly - maybe Kinu takes way too much glee in the damage she's causing, but isn't the reason she's causing it because her karaage is so damn good? Nevertheless, Souma-kun stepping in to try and save the shoutengai by designing a better karaage is a grand setup, and things get especially entertaining when he calls in Nikuma for help. And of course Nikuma isn't going to say no to a request from this classmate, though her tsun facade never wavers. 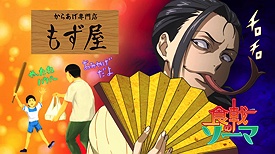 To say Nikuma and Mayumi are opposites (though they share one obvious quality) is the height of understatement, and they make for an amusing pair. The hill they have to climb is a steep one, as tough as Mozuya is - and using Nikuma's high-rent beef instead of chicken isn't an option. The ever-resourceful Souma soon cooks up a plan, but what he doesn't realize is that Kino has hired a consultant to help her break into Kanto, Eizan Etsuya (Tomokazu Sugita)- and that Eizan is in fact a member of Tootsuki's Elite Ten. Worlds are colliding, and it should be interesting to see what that impact leaves in its wake.