The goal of great fiction is to leave an impact on readers and viewers long after they've finished consuming the piece. When all is said and done, whether you're watching an anime, reading manga, or taking in a live action motion picture, the goal is to be moved in some way by the end of it all. For many of us, anime can have quite an impact, touching our hearts and changing our lives forever. It's what good fiction does and it's exactly what any viewer can expect from the series Attack on Titan.

Attack on Titan is a story about giant man-eating creatures called Titans terrorizing the last of human civilization. The main characters Eren Jaeger, Mikasa Ackerman, and Armin Arlert train their bodies and minds to battle against these giant monsters. Immediately, the audience is thrown into a world of madness where any moment of the characters' lives could very well be their last. 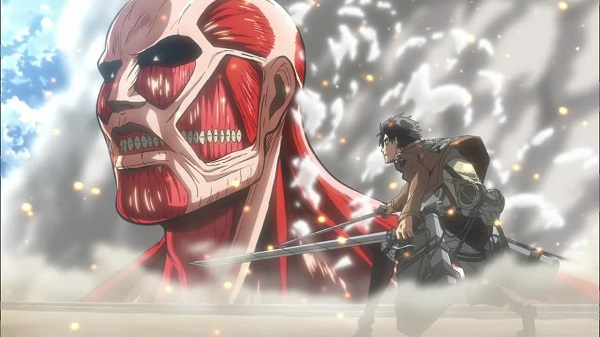 It's tense, it's gripping, it's dark, and it's pretty damn addictive. From the moment the series begins you can't help but feel hooked and automatically feeling for our main heroes. They've experienced terrible suffering, both physically and psychologically, and have come through the other side.

What makes the series so great is its compelling story, colorful cast of characters, the raw human emotion, and undoubtedly the well-crafted animation. It's certainly one of those anime that you can show a nonbeliever, a person who thinks anime is akin to cookie cutter western animation, and turn them not only into an avid fan of the series, but perhaps have them rethinking their stance on anime altogether.

It's hard to believe that a show with such a serious tone could ever have moments of levity, but thanks to the magic of the internet, avid fans of the show have made it happen. Here are some hilarious GIFs from Attack on Titan!

Watch the Titan frolic in its natural habitat.

When you're mad at life

You to your crush

Sounds like something Yuno from Mirai Nikki would say!

You wish you you could pull this off.

If Eren plans on defeating every Titan in this frightening world... he better learn how to stand up first!

The only way you should be greeting your friends

The titans just got a whole less scary.

When life gets you down...

...sometimes you stay down.

Beauty and the Beast? More like Levi and the Titan!

He opens windows with the best of them.

Father of the year award

Runner up being Gendou Ikari

This is no time for games!

Jean is not amused.

Somehow giant cutie Eru Chitanda is even scarier than the actual titans...

Mikasa! I choose you!

I'd play an Attack on Titan x Pokemon crossover game.

So beautiful, so graceful!

Attack on Titan is one of the most serious anime and manga out there. But there's no reason not to have little fun with the subject matter. In a story so depressing, you have to find something to laugh at.