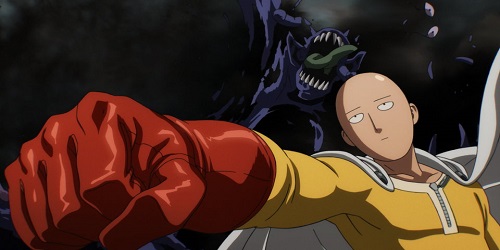 Each week that a new episode of One Punch Man comes out, Saitama faces new challenges that test his ability as a hero. Luckily, Saitama possesses all of the elements that make him an exceptional hero within the shows context, and a lovable protagonist through the fans' eyes. There are so many good moments of the show to emphasize Saitama as a character, but these next 8 gifs from episodes 1-10 really sum up Saitama as a character.

Even when dealing with something as minor as a single mosquito, Saitama goes to the extreme in trying to eliminate whatever is bothering him.

He has zero fear or hesitation

When dealing with an enemy that has super speed and wields a sword, what else is there to do other than to nonchalantly shatter your enemy's sword with your teeth?

The element of surprise

Saitama has the ability to out dig the mutant mole, "Ground Dragon," predict where the mutant was going to end up, and scare the life out of him.

Can destroy ANYTHING in a single punch

Saitama's strength knows no bounds. Not only can he destroy monsters that threaten the well being of humanity in a single punch, but he can also completely obliterate a meteor in the same manner.

He has a defense equally as strong as his offense

Saitama did not even flinch at the devastating blow Deep Sea King gave him to the back of the head. He even taunts the Deep Sea King, the monster that took out S-ranked heroes Puripuri Prisoner and Genos, saying that "your punch was too weak, that's all."

Can even strike fear into his apprentice's robotic heart

Although Saitama is labeled as a lower class hero than Genos, Genos still knows that Saitama is many times stronger than him. When telling Saitama to go all out during their training, he knew that getting hit by a single punch would be the end of him.

Merciful to those he trusts

Saitama is a simple man of simple actions. If something is in his or humanity's way, he'll eradicate it. If not, then he sees no need to cause any harm or destruction, even to the apprentice that he only kind of regretted taking on.

Saitama is arguably one of the strongest characters in anime. Although he is capable of eliminating anything he wants with a single punch, he is a simple man that prefers a simple lifestyle. If he's not fighting off threats to humanity, he's looking for sales at the grocery store or watering his cactus.

Saitama's face when he tells us the secret to his superhero powers is epic! Not to mention, his secret to success is surprisingly boring.

Using his opponents strength against them

Saitama doesn't even have to move his hand to deliver a punch right where it hurts.

He doesn't need superhero powers to be a superhero

Saitama was always a hero, even before he started training and lost all his hair.

Although he wasn't able to dodge this attack, Saitama's defense is so high he wasn't affected by this punch that should have sent him flying in all directions.

His oh so graceful running

Genos looks super cool, but Saitama on the other hand is still our lovable dorky superhero.

Saitama's core strength is shown when he quickly detects Genos's direction of attack and simply bends over backwards, letting Genos fly harmlessly over him.

There are many more moments in One Punch Man so far that could have been included in summing up Saitama's person. However, let's not forget that for all of the trials that he goes through and all of the heroic deeds that he accomplishes, Saitama is still just a hero for fun.

8 Hajime no Ippo Gifs that Will Make You Feel Lazy

If you watch Hajime no Ippo and feel inspired to achieve something in your life, then congratulations, you're a "glass half full" kind of person. If you're like myself and watch Ippo in despair because he makes you feel like the true couch potato you really are, then this article is for you.