The anime Afro Samurai is what happens when Gonzo studios says, "We'll do it live!" The sheer absurdity of this show is what makes it awesome. At first you'll think, "Oh, this is just an alternate universe feudal Japan" then somebody whips out a cellphone, and then a demented cowboy will shoot up a samurai. That's when you'll realize that it's best to just shut your brain off and enjoy the ride and the view of the buxom ladies. 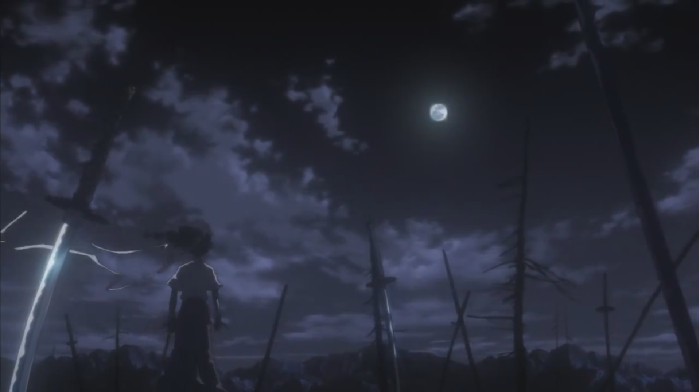 The Afro Samurai is out for blood, with a vendetta to avenge the death of his father by defeating the best warrior in all the land. On the way to that goal, he's gonna have to slice his way through a lot of bodies, put up with a foul-mouthed sidekick, and get laid of course. This isn't a show for the feint of heart or for the theater critic. No, this is a show for guys who like muscle cars and their whiskey straight. Hold on to your 'fro, because here come the GIFs.

Was that a head or a pimple?

THIS IS THE GREATEST THING I'VE EVER SEEN!

Chicks with scars are so hot. I think I have a new fetish.

Those are nice bo...aah earrings you have.

I'll apologize for the nightmares now.

In the Afro Samurai universe, Lemonade=Steroids.

I need to drink more lemonade.

I wish that I loved my children as much as this man loves being evil.

Look everyone, it's Freddy Kruger dressed as a cowboy.

How does he keep his hair so perfect with all the blood and guts flying around.

Get a load of fourey...wait OMG!

Well at least he has permanent night-vision now. Look at the bright side of life, right?

Gonna have to do better than a crossbow, fella.

I think they're overdoing this whole killing thing. Don't you?

I think you got him.

The power of the afro is not to be underestimated ladies and gentlemen. The wearer of such a hairstyle is gifted with enhanced abilities including: looking cool, great swordsmanship, looking cool, improved sex appeal, looking cool, and also an affinity for ridiculous amounts of gore. Now before you go on with your day and do activities that don't include watching Afro Samurai, I have one more question: why isn't this guy number one on MAL's favourited character list?

8 Hajime no Ippo Gifs that Will Make You Feel Lazy

If you watch Hajime no Ippo and feel inspired to achieve something in your life, then congratulations, you're a "glass half full" kind of person. If you're like myself and watch Ippo in despair because he makes you feel like the true couch potato you really are, then this article is for you.