Girl Power: The Lead Female Cast on Shingeki no Kyojin

Shingeki no Kyojin has been labeled as one of the most popular and novel series to come out in recent times. Strong female leads, complex characters, and an intriguing plot line have been the weighing factors for the exuberant reception of this series. Even though the males of the series, especially protagonist Eren Jaeger, offer a captivating performance, the females in the series can be said to “steal the show”. Between Mikasa Ackermann, the serious and stoic best friend of Eren, to others such an Sasha Blaus, aka “Potato Girl”, the range of characters provides a well-rounded and broad cast of personalities that contribute to not only the overarching plot, but also to each other. 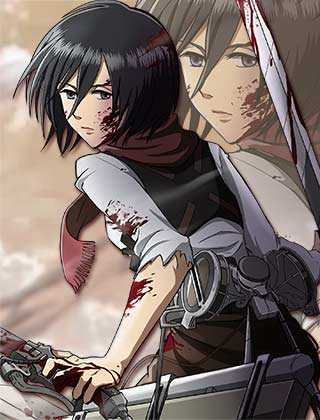 Mikasa Ackermann is the yang to Eren’s yin. Although quiet and reserved compared to the passionate and outspoken Eren, she has a deadly side that gives her great focus to be one of the best scouts in the entire Survey Corps faction. What is often noticed first is her stark stoicism, often mistaken as a lack of emotion or caring. This is especially true when she comments to another scout, “Asking me for compassion is a mistake. After all, I have no heart or time to spare.” However, when taking a step back to look at her history -- especially the significance of her red scarf -- her more sensitive nature comes to light. While fiercely loyal to the Survey Corps and willing to be the cool head when times get twisted, the only thing that could cloud her judgment would be Eren’s wellbeing. She follows him every step in his life, including giving up her dreams to join the Survey Corps with Eren when they both come of age. And when something disastrous happens to Eren, Mikasa’s aloof persona appears to crumble when she appears to have failed her own mission in protecting Eren, and yet again when that disaster appears to be false. Strong, unique, and relentless, Mikasa and Eren share similar traits, but expressed in different ways. 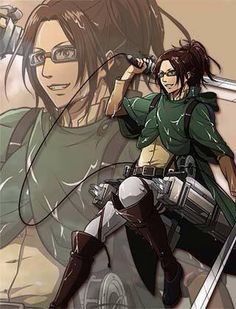 Zoe Hanji (or Hange Zoe)* is known for exuberance, intense intelligence, and near obsessive curiosity with Titans. Not only being squadron leader for the Survey Corps, Hanji-san is also a step down from Commander Erwin, placing among the top ranks in the Corps. Hanji’s curiosity with Titans is one of the main drives of the story, with her fearless demeanor giving rise to understanding better the human predators. In the anime and manga, Hanji’s best known quote is, “If there’s something you don’t understand, learn to understand it. It’s well worth any risk to our lives.” With such an insatiable inquisitiveness, one can be left wondering if such a drive could provide a detriment to the fellow troops. It seems to be more of the opposite in Shingeki no Kyojin. While others may look at Hanji as eccentric in her interests, the interest to understand instead of outright kill as the first impulse gives not only a greater story arch, but perhaps striking the importance of science in understanding the cruel yet beautiful world.

*Note: Hanji is portrayed as a girl in the anime, but her (?) gender is unclear in the manga. 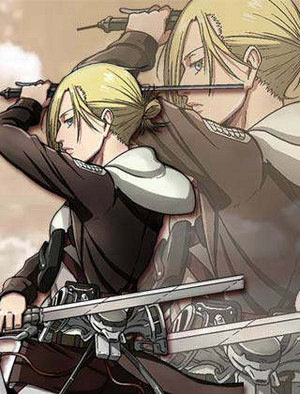 Annie Leonhart is often labeled as an antagonist in the first part of Shingeki no Kyojin. Like Mikasa, she has a strong yet quiet presence, but instead of being shadow-like as Mikasa, Annie is more present and emotional. However, alongside her noted loner nature, this creates an odd dichotomy for the character. Her sense of loyalty, duty, and righteousness that drive her emotions should be a formula for someone in the Survey Corps, not to her assigned position in the Military Police. What it actually does is it provides a motivation not towards the destruction of Titans, but that towards those who trod on the weak: humankind. From an early age, her father taught her that the world is cruel. But with Annie, that statement stops there, and her father was no help concerning her warped understanding. She represents an inverse of another perspective on a rich value: duty. 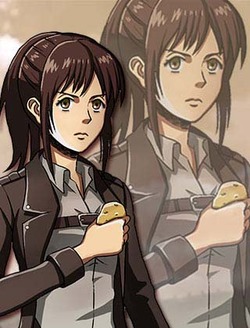 Sasha Blouse can seem to be mostly in for the comic relief of the series. She is known throughout Shingeki no Kyojin for her ravenous appetite and sometimes face-palm worthy actions more often than any aspect of her personality. During training, for example, their head instructor (Keith Shadis) sees Sasha eating a potato in the middle of his speech to “welcome” the new recruits. Astonished, he asks her about the potato. She quite calmly just replies that it is simply natural for humans to eat potatoes and proceeds to try to share with him. Shadis is appalled and makes her run for several hours. This incident earns her the nickname of “Potato Girl” throughout training. Even after this, though, she exhibits her mild kleptomania not by stealing expensive things: just food. Yet one must wonder how she does not get caught. As the story progresses, that question becomes more relevant as her noted “unorthodox” methods are revealed and proven invaluable to the Corps. Although Sasha can be seen as being less courageous than the aforementioned female characters, the fact that she feels fear and still goes into the Survey Corps says more about her courage than others who naturally have it. 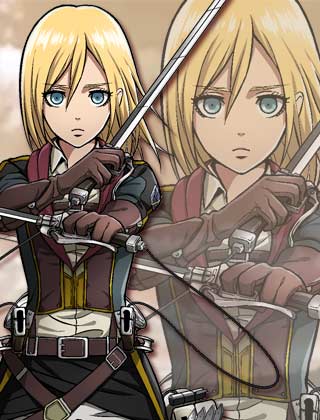 Lastly, Krista Lenz is one of those “pocket characters” (no pun intended on her small stature). In the beginning, these characters do not seem to be of great importance in Shingeki no Kyojin. Such is the case with Krista. She does not play as big of a role as Mikasa or Hanji in the beginning but brings about some twists in the series later. Her importance can be noted with her lack of verbal interaction between other characters except for another female character named Ymir (another of these “pocket characters”). Like Mikasa and Eren’s dynamic, these two are much like that with Ymir being more confrontational and cynical and Krista being kinder and gentler with those around her. However, this kindness hides darkness with many secrets inside.

In conclusion, Shingeki no Kyojin offers more than pretty faces and one dimensional personalities for the female cast. These women are more used to stir emotion than for sex appeal. With depth and complexity to offer not just for the male characters, but to all the characters, the series will only inspire more as time goes on.

The Neighbors Club: a small school club created for the sole purpose of meeting new people and creating real friendships within and outside of the club room. So just who are a part of this club and what are they like? Lets have a look at these 7 characters that have given life to the Neighbors Club!