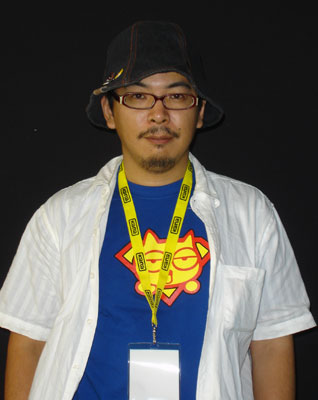 Born on May 15, 1972 in Yomogita, Aomori Prefecture, Takei Hiroyuki is the author of the popular series Shaman King. He first started out as an assistant to famous authors such as Nobuhiro Watsuki, the author of Rurouni Kenshin, and Tamakichi Sakura, the author of Sabaki no Kaminari. He is also a former colleague of the famous author of One Piece, Oda Eichirou, during his time as an assistant to Nobuhiro Watsuki. After being able to publish his own manga, Butsu Zone, Takei’s career as a serious author began. A big fan of Tezuka Osamu, he was greatly influenced by Tezuka’s early works. In 1994, he was awarded the Tezuka Award for his work on Itako no Anna.

Takei Hiroyuki’s most popular work Shaman King was first published in the magazine Weekly Shounen Jump in the July 13th issue in 1998 and ended on September 13th, 2004.

The story begins at a cemetery in Funbari Hills where Oyamada Manta spots Asakura Yoh surrounded and conversing with ghosts. The next day, Manta repeats what he saw the night before to his classmates, but nobody believes him. Determined to prove that he is telling the truth, Manta starts to follow Asakura Yoh, and winds up getting beat up by Ryu, who is the head of a biker gang. In the process, Ryu accidently destroys the tombstone of a powerful spirit named Amidamaru. 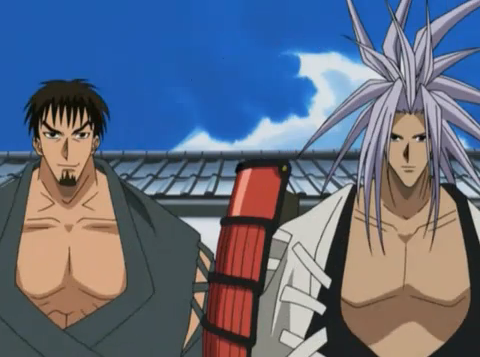 Amidamaru is a ghost bound to his tombstone, unable to cross over to the other side because he is waiting for his best friend Mosuke to show up at their promised meeting place. Mosuke on the other hand is bound to Harusame, a legendary sword which he created, that is even able to cut through stone. He was supposed to bring this sword to Amidamaru before they both met an untimely death. Like his best friend, Mosuke is also unable to cross over as he is filled with regret at being unable to bring the sword to his best friend as promised. You can see his tears spill over the sword where it now rests at a museum nearby. Orphaned and alone since they were young, Amidamaru and Mosuke grew up together and worked hard to fulfill their dreams: Amidamaru, to become a great samurai, and Mosuke to create the finest Japanese sword. Just when both their dreams seemed to come true, Amidamaru receives orders from their master to kill Mosuke in order for his masterpiece, Harusame to become a one of a kind work of art. Unable to kill his best friend, Amidamaru warns Mosuke and the two agree to meet the next day so Mosuke can give the sword to him. However, their plan was overheard and they were both murdered. Six hundred years later, the loyal Amidamaru still awaits his friend at their promised meeting place.

At first Manta is wary and suspicious of Amidamaru because legend has it that he was a demon and a killer of a thousand people. Manta, who believes the tales tries to warn Yoh not to trust him, but Yoh who never doubts any person or spirit, disregards his advice and asks Amidamaru to become his primary spirit. 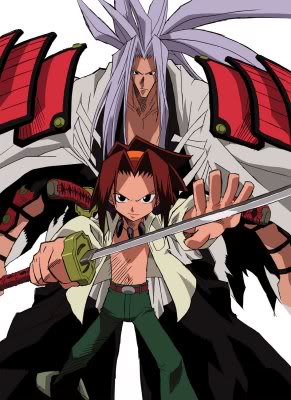 Yoh wins the loyalty of Amidamaru when he shows that he is willing to let him go rather than become a pawn to Tao Ren, another young boy who also comes from an elite family of shamans and whose dream is also to become the Shaman King. The fact that Yoh is willing to give up his primary spirit in order to keep him away from the clutches of the ruthless Tao Ren, moves Amidamaru, and Yoh is able to temporarily possess Amidamaru 100 percent in order to defeat Tao Ren. 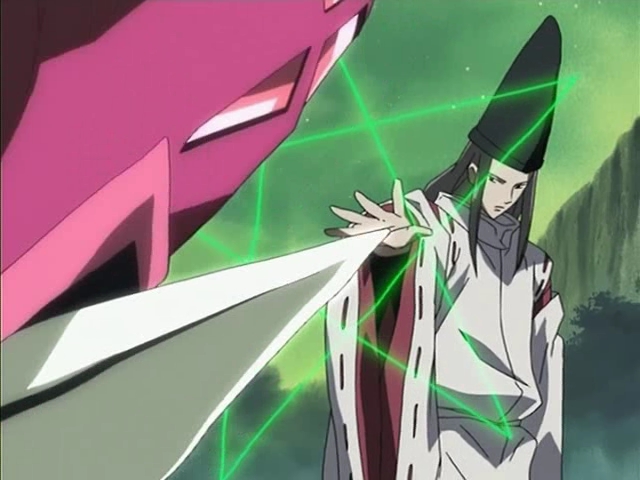 Founded by the most powerful priest in history, the Asakura family is a group of elite shamans who live in Izumo, Shimane Prefecture. Their true purpose is to defeat Asakura Hao, their ancestor who they have defeated once one thousand years ago when he tried to become the Shaman King in order to fulfill his dream of creating a shaman only world, and again five hundred years ago when he was reborn as a member of the Patch tribe. However, before he was defeated, Hao was able to master the pentagram, and in doing so was able to use the five powers of nature which are fire, earth, wind, metal and water. This god-like power allowed him to control even demons. By mastering the pentagram, Hao was also able to bargain with the devil in order to reincarnate himself at will. He also created the Cho Senji Ryakketsu that contained all the teachings and secrets to his power and sealed it using Zenki and Kouki, his shikigami guardians to protect it. After he was defeated it was sealed in the Temple of Hao by the Asakura family. Zenki and Kouki are extremely powerful and will kill anyone who tries to break the seal. However, they are no match for Anna who quickly defeats them and proves that she is worthy to be the wife of the Shaman King. This is also the reason Hao takes a special interest in her. All throughout the series, Yoh and his group of friends are attacked by Hao’s followers. But instead of attacking Yoh directly, they attack his friends. This is because Hao believes that a portion of his soul lies within Yoh, and he considers him to be his younger brother. He wants Yoh to join him in his quest to become the Shaman King, and believes that he will be useful in the new world he is trying to create. Hao believes that the group of shamans surrounding Yoh are holding him back from his destiny of obtaining great power. He believes that targeting and killing Yoh’s friends will ultimately force him to take things seriously. He even wants to help Anna give the Chou Senji Ryakketsu to Yoh in order for him to obtain power equal to his own. 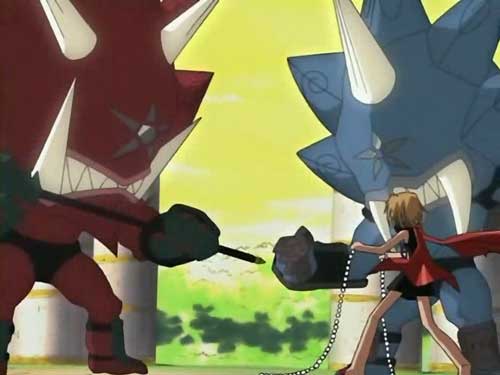 Yoh doesn't know it yet but he is destined to carry out the mission of the Asakura family, and that is to finish what his family started one thousand years ago. Being connected in the previous and current life intertwines Yoh and Hao’s destiny in a complicated way. Although what Hao did in his previous life, and what he is trying to do in his current one as well is considered to be evil by many, Yoh has doubts about the need to kill him. Like many other shamans he has come in contact with in the past, Yoh feels that people are able to change and believes in the good in him. However, things change when Hao seizes the Great Spirit by force and decides that he no longer needs Yoh and tries to consume his soul. But by being surrounded by all the people he has encountered in his life, and being reunited with the spirit of his mother, Hao loses his hatred towards humanity and also his power to see into the hearts of others. No longer lonely and filled with hate, Hao gives up his original dream of creating a shaman-only world and promises to try to make the world a better place.

Insight into the Tao Family 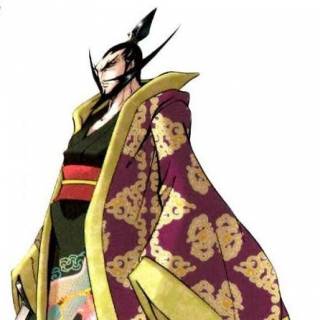 The Tao family is also another elite family of shamans who used to work for the emperor of China. But as times changed, people grew more and more uneasy of the spiritual power that the Tao family held, and they were seen as monsters and were kicked out of the capital and sent to a god forsaken frontier. They were betrayed by the country and people that they risked their lives for, and their name was wiped from history. Unable to let go of the past, Yuan feels that as head of the Tao clan it is his responsibility to bring back honor to the family name. His ancestors spirits still linger, unable to cross over until the Tao name once again marks history. This betrayal so many years ago is the reason why he is unable to trust anyone, and also why he instilled hatred for all things in his son. He believes that trusting people and making friends will instill doubt in Ren and therefore make him weak. However, being defeated by his son Ren shows him that it is time to let go of the past and put his trust in the future.

A shaman is someone who can see and communicate with spirits. A shaman’s level is decided by how many strong spirits he is able to possess. The Shaman King is a shaman who can become one with the king of spirits.

Each shaman has a primary spirit who they are able to possess by changing the spirit to a 'spirit ball' and combining it with themselves. Another way is to transfer the spirit into a certain object of meaning and that way they can use the Overlord which is a higher level than spirit ball mode.

1080 are the beads Anna wears, and it contains the 1080 spirits of the Asakura clan.

Meet the Characters of Shaman King

Shaman King is filled with a bunch of interesting characters with supernatural powers. Let's take a closer look into their traits and personalities.