Part of the extremely talented CLAMP's stable of work, xxxHOLiC features a set of players that may be a little unorthodox for fans of lighter fare. It's important, nevertheless, to get to know the faces behind what may be one of CLAMP's most haunting and beautiful stories of all time, especially if we're dealing with fate, one of the main threads of the narrative. 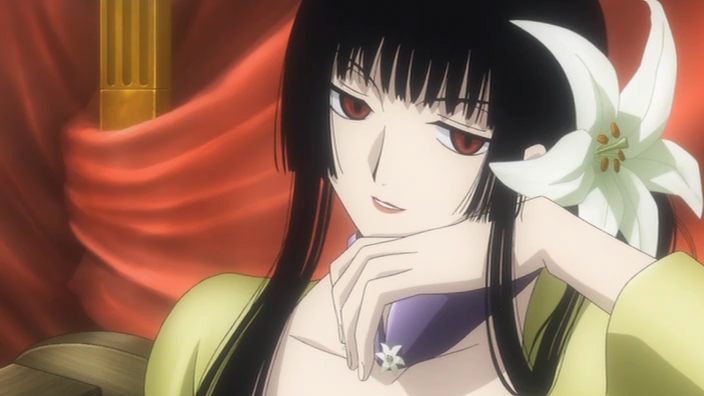 Yuuko Ichihara is a tall, lithe woman with pale skin and gorgeous, glossy black hair that cascades all the way down her back. Clad in colorful kimono that she wears around her home, she accessorizes with hair ornaments and jewelry that tends to match the clothing she's chosen for the day. Her style never changes, leaving her absolutely recognizable as what you'd consider the "core" of the entire series. You'd never know she's a witch by looking at her, but she certainly is bewitching.

As "The Dimension Witch," Yuuko is a key player in the world of xxxHOLiC, and mentor to young Kimihiro Watanuki. She's extremely eccentric, and it's very hard to read her. In many ways she behaves as a guide for Watanuki and the world of spirits as he eventually becomes entangled within the strange secrets of her mysterious Tokyo shop. She deals in wishes, granting specific wishes of anyone who enters her shop, as long as it's sincere and the guest makes a sacrifice of equal value to the wish.

Though Yuuko is a witch, she's a very kind and caring soul, and opens up to Watanuki with specific thoughts and feelings as well as concerns she has as the two begin to grow extremely close. For the most part, however, Yuuko has difficulty opening up to others and keeps her innermost thoughts to herself. The fact that she bothers to share anything with Watanuki is an accomplishment in and of itself.

Yuuko is a celebrated foodie and loves to eat, often having Watanuki whipping up delicious and varied dishes to eat while he's working at the shop. That's only one of her quirks, as she herself sees a fortune teller in order to hear about her future. Despite being a witch, she cannot see her own future, so she sees an old woman named Oba-chan to go to the trouble for her.

Aside from her strange personality and odd behaviors, Yuuko has a wide variety of tricks up her sleeve, such as the ability to send people to other dimensions, hence the appearance and inclusion of characters from xxxHOLiC in Tsubasa: Reservoir Chronicle. This power is how she earned the nickname of "Dimension Witch".

Though Yuuko herself is an extremely powerful being, most of the time she's content to spectate and only intervene when the happenings around her become so dire that she must get involved. Yuuko isn't averse to having fun, though. In fact, she loves alcohol and drinks it in most of her free time, even sending Watanuki to the drugstore when she's down and out with a hangover. 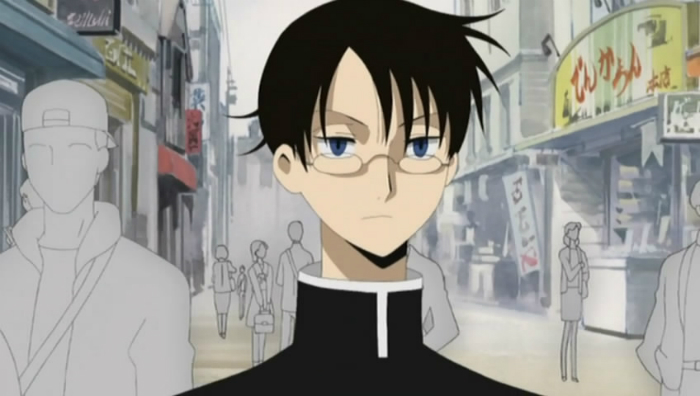 Watanuki is the central protagonist of the series, a passionate and sometimes very volatile student who lives alone since his parents passed away. He sports jet black hair, glasses, and a very slender figure that's especially exaggerated with his black school uniform. He often appears slightly grumpy, but if he's excited, speaking to his crush, or buried in thought, his innocence comes out fully. Despite what many would consider an extremely childish personality at the beginning of the series, by the end of xxxHOLiC, Watanuki has grown into a much more serious and contemplative young man.

Where Yuuko is responsible for many of the plot points that develop within xxxHOLiC, Watanuki is undoubtedly a catalyst for all of the events to occur around. He has struggled with spirits that only he can see following him around all his life, so when he enters a bizarre old shop in Tokyo he makes a desperate plea to Yuuko to get them (quite literally) off his back. But everything comes at a price, and Watanuki can't afford his yet as he has nothing so great to sacrifice. In exchange, he begins working part-time at Yuuko's shop in a bid to earn enough time to pay back Yuuko for the enormous wish he's asking of her.

Watanuki's self-esteem problems have always plagued him, so while he's working with Yuuko learning the art of divination, he barely recognizes how much he's changed since starting his new job, and he becomes a much more formidable version of himself as the series wears on. Though Watanuki is typically responsible for many of the jobs at Yuuko's shop she finds are too "low" for her, the two eventually begin to share a very close bond. It deepens into a relationship that's a joy to watch mature throughout the series.

Watanuki very quickly becomes a helpful and warm, welcoming figure for the spirits who seek him out for assistance because of the special blood he inherited from his parents. It's a very meaningful transformation, especially since at the beginning of the series he seems to be carrying a chip on his shoulder, especially when it comes to the special talent he has. He goes from treating the spirits like a common nuisance to respecting them, as well as attempting to aid them despite being absolutely terrified of what the repercussions could be. 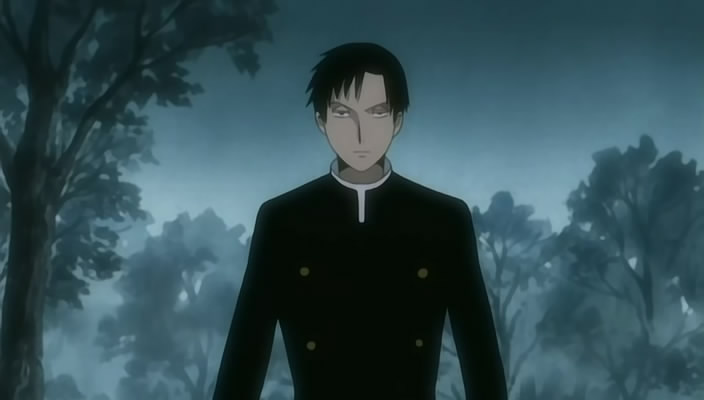 Shizuka Doumeki slightly resembles Watanuki in some ways, though he's got a more mature look to him, and is extremely tall. His ebony hair and his pale skin give him an unearthly look that's a lot more akin to Yuuko than the rest of the cast. Rarely will you see him cracking a smile, however, as he's usually wearing a definitively angry expression. He's capable of smiling, but the rare times he does, Watanuki is quick to point out how creepy it actually is.

Doumeki is Watanuki's opposite in nearly every single way. He's cool, calm, collected, with a deadpan and very snarky sense of humor. Much to Watanuki's chagrin, he has a penchant for showing up everywhere Watanuki goes as well, ruining the "romantic" moments that could spring up for Watanuki and Himawari. Beneath his rough exterior, however, lies a very inquisitive and informed nature, making Doumeki one you want on your side in a crisis, especially one that tends to involve spirits and others from the next world. Deep down, however, Doumeki and Watanuki are good friends, and this allows for some very important operations to be undertaken despite Watanuki's relative newness to "wish-granting" a la Yuuko. 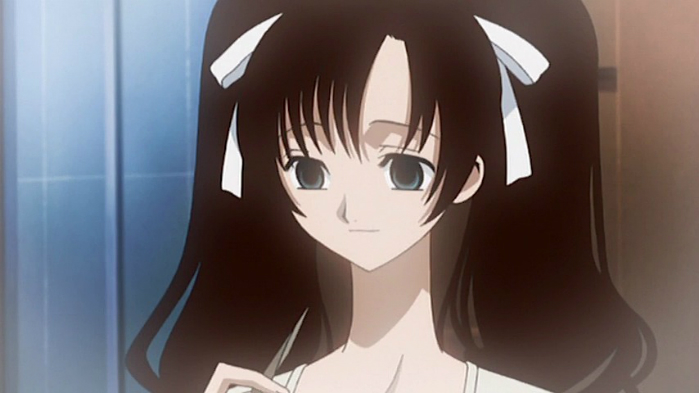 Himawari is a relatively innocent young girl who happens to be Kimihiro Watanuki's crush, a beautiful student with long curly brown hair and a name that means "Sunflower." She typically tends to wear her hair tied up to show off the curls and waviness as well as a few ribbons to accent the style.

She's a bit of an airhead, though she's very friendly to Watanuki and Doumeki, and also interacts with Yuuko from time to time. She enjoys sweet treats, romantic novels, ghost stories, and astrology, making her a willing accomplice in many of the feats Yuuko and company tend to undertake. She's rarely seen without a smile on her face, and despite Watanuki's romantic feelings for her, it's assumed time and time again she has eyes for Doumeki instead, despite knowing how Watanuki truly feels about her. 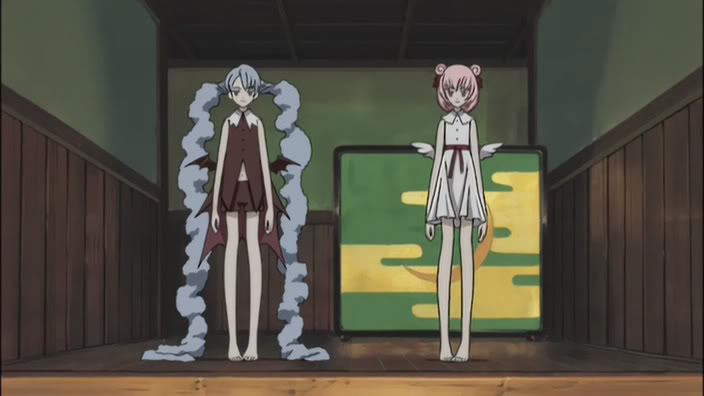 Maru and Moro are two very peculiar and playful spirits who have no souls. They're forever staying at Yuuko's shop because they can't leave, but they also seem to act as Yuuko's companions, always in a great mood. They have an attachment to Watanuki, who they always are content to latch onto. They're not entirely devoid of individual personality, but they're very similar to each other. They're like pets to Yuuko, and she's very protective of them. Without souls, they're doomed to a life of living the same types of days over and over－but at least they're relaxing!

It's Fate That We'll Meet Again

The people and places explored in xxxHOLiC outnumber the main and supporting staff we've covered here, especially considering the spirits, artifacts, and other bizarre sightings within the series. Explore the xxxHOLiC more thoroughly with the accompanying manga series and film, and watch all the pieces fall together nicely. You'll be glad that you did.

The Purebloods of Vampire Knight possess the most ethereal beauty and play a very significant role in the anime series as they are considered the rulers of all other vampires. Here's a list of what makes them the most powerful among vampires.

Welcome to High School DxD, a fantasy world featuring a diverse cast of characters where demons take on roles of chess pieces and compete against each other in sanctioned combat matches! Come say hello!