Devil Fruit are mysterious and strange fruit found in the whimsical world of One Piece. They can either be a blessing or a curse. Find out what devil fruit are, which abilities which fruit enable, and who in One Piece has tasted these forbidden fruit so far!

What is a Devil Fruit?

Devil Fruit are mysterious fruit found in the One Piece anime series. When consumed, they grant new abilities (and a new look) which can range from interesting to absolutely absurd. It is also said that there are over 100 types of Devil Fruit out there, although little is known about them. As stated by the creator of the series, Eiichiro Oda, a "certain professor" will be revealing more details on the mechanisms and secrets regarding the Devil Fruit in the near future, so be sure to keep your ears open. For now though, check out this comprehensive guide on these mysterious delights.

Devil Fruit come in all different shapes and colors, with most of them sharing the distinctive swirling marks. In addition, they are all shown to have a horrible taste, making the consumer feel like they have taken in poison; unaware that you only need to take one bite to gain the ability of the Devil Fruit, many challengers have suffered through the entire thing in vain. Anyone who consumes these Devil Fruit becomes a Devil Fruit user.

It is said that there is only one of each type of Devil Fruit at a time, thus it would not be possible to have two or more users sharing the same kind of power. Moreover, when a Devil Fruit user dies, their ability is then regenerated inside another fruit of the same kind.

Little is known about Devil Fruit. In fact, most people outside Grand Line who live in secluded places do not seem to know about the existence of Devil Fruit at all, nonetheless about their magical powers. In addition, there are lots of rumors regarding Devil Fruits, despite the lack of real information. One rumor which Jabra narrates is that Devil Fruit house devils which fight when they are placed near each other. The battle would then destroy the users' bodies. However, Blueno notes that such rumor is not true and that scientists from Grand Line have discovered that the phenomenon of one's body destroying itself only happens when a person consumes two Devil Fruit.

The abilities that Devil Fruit grant are very mysterious and diverse. They are usually sold at a high price, and some Devil Fruit users are even sold as slaves. Often, people may search for a particular fruit to be able to gain their desired ability.

A Devil Fruit Encyclopedia which lists the names and abilities of all the Devil Fruit also exists. However, only a few fruit have illustrations, thus, some Devil Fruit could not be identified by their shape. Blackbeard is shown to have used the book in his search of the Yami Yami no Mi. Sanji also read the book when he was young and became interested in the Suke Suke no Mi, saying that he wanted to become a super hero with it, but in reality, he only wanted the power to see naked women.

The Three Types of Devil Fruit The Paramecia Devil Fruit is the most commonly seen type among the three. It grants its users abilities which affect their body, manipulate their surroundings, or produce substances.

Strengths: Paramecia fruit have the greatest variation of abilities. Some of the strongest characters in the series are Paramecia users. It also matches well with users that are physically weak, as it allows them to triumph over those stronger than them by using their abilities creatively.

Weaknesses: Paramecia is the only type of Devil Fruit where there is a chance that you'll obtain a useless ability. The Zoan Devil Fruit allows its user to transform into another species, at will. It provides the user three basic forms: Human Form, Human Beast Form, and Beast Form.

Strengths: Zoan types are effective when it comes to close combat. In their hybrid form, Zoan users can also enhance their senses.

Weaknesses: Zoan users mainly rely on their fighting instinct to win battles, but to get high up in the food chain, they must master a wider variety of skills.

There are also sub-classes within the Zoan type of Devil Fruits: 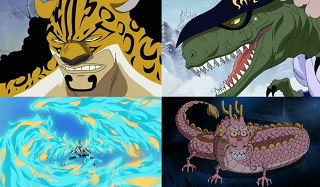 Carnivorous Zoan (top left) - the most commonly seen type of fruit, considered to be the weakest 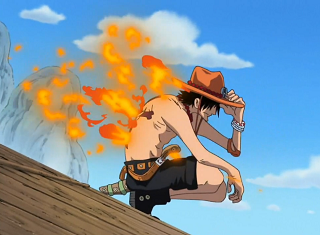 Logia Devil Fruit allow users to transform into natural elements or forces of nature. They are often considered the most powerful and the rarest of the three types.

Strengths: Logia users can create, control, or transform their bodies, partly or completely, into an element. They can also split or separate their bodies into multiple parts. Elemental bodies can nearly nullify enemy attacks, making them almost invincible.

Weaknesses: Some Logia abilities are weak compared to other elements/abilities. Although Logia users are pretty much invincible against elemental attacks, they can not recover from blows which damage their physical bodies.

On rare occasions, Devil Fruit abilities can be "awakened." This can increase the abilities of the user depending on the class of the Devil Fruit. However, details about how a Devil Fruit could be awakened are still unknown and little is known about its effects.

The Jailer Beasts in Impel Down are revealed to be awakened Zoan users. Awakening for them grants the users larger transformations and more physical strength. Unfortunately, they develop cute eyes and runny noses as a sort of side effect, making them less intimidating to their opponents.

For Paramecia users, awakening allows the user to affect their surroundings. An example is Doflamingo’s Ito Ito no Mi which allows him to turn the buildings and ground around him into strings, thus extending his range.

Side Effects of Devil Fruit

There is always a price to pay for having special abilities. Becoming a Devil Fruit user does not make one truly invincible as there are a couple of weaknesses that they possess. In addition, Devil Fruit users may be labeled as "freaks" or "useless" by people around them, most especially when the abilities they gain are a bit useless and when they lose their ability to swim. 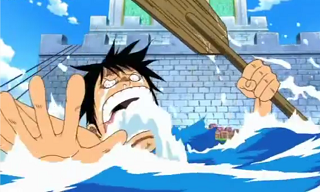 Devil Fruit users are known to be completely helpless when they are submerged in water. It does not only apply to seawater but all types of bodies of water including the white sea of Skypiea. Moving water such as rain does not affect the user.

Even if only a small part of the user's body is submerged, they are still unable to use their Devil Fruit abilities. Losing the ability to swim for Devil Fruit users who are pirates or marines can be really dangerous. 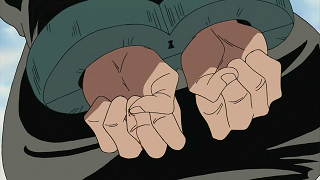 It is a special substance which has the same energies as the sea. It drains the energy of Devil Fruit users and prevents them from using their abilities. The user becomes weakened depending on how much physical contact the user has with the Sea-Prism Stone.

The marines use this weakness against Devil Fruit pirates by making vast quantities of handcuffs, jail cells and weapons from Sea-Prism Stones.