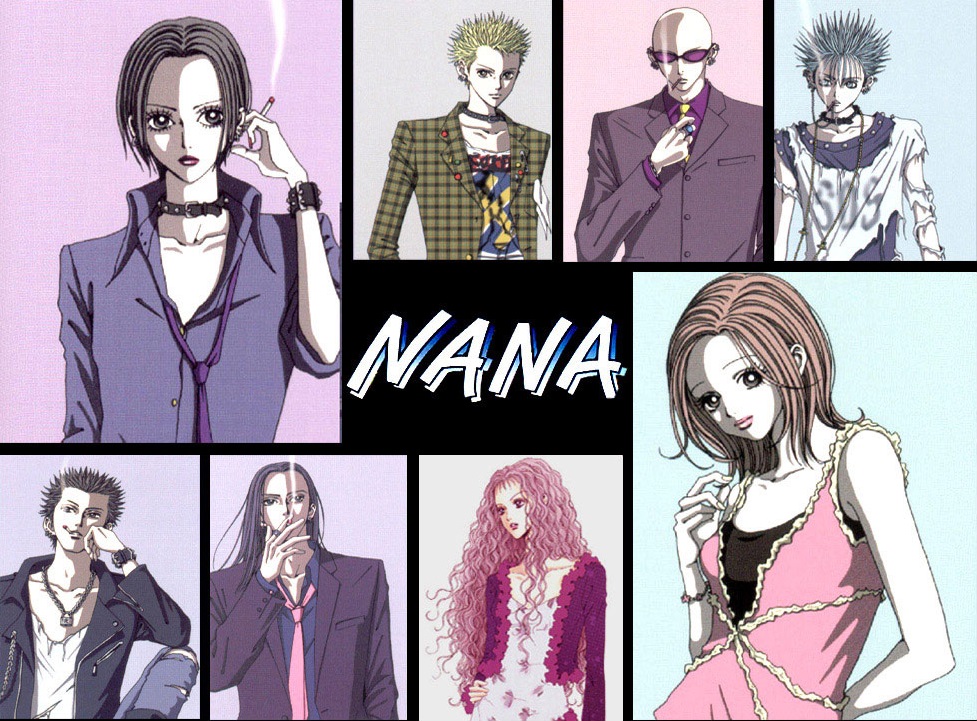 Nana is the popular 2006 anime series following the lives of two girls who, at least at first glance, appear to be completely different but share the same name and age. They meet for the first time on a train heading for Tokyo and end up becoming flat mates soon after. However, even though they appear to be physically and psychologically different (Osaki Nana is a bold and headstrong punk vocalist with heavy make-up and a lot of piercings while Komatsu Nana is a gentle and spoiled girl who looks like the girl-next-door), they still manage to become very close friends. 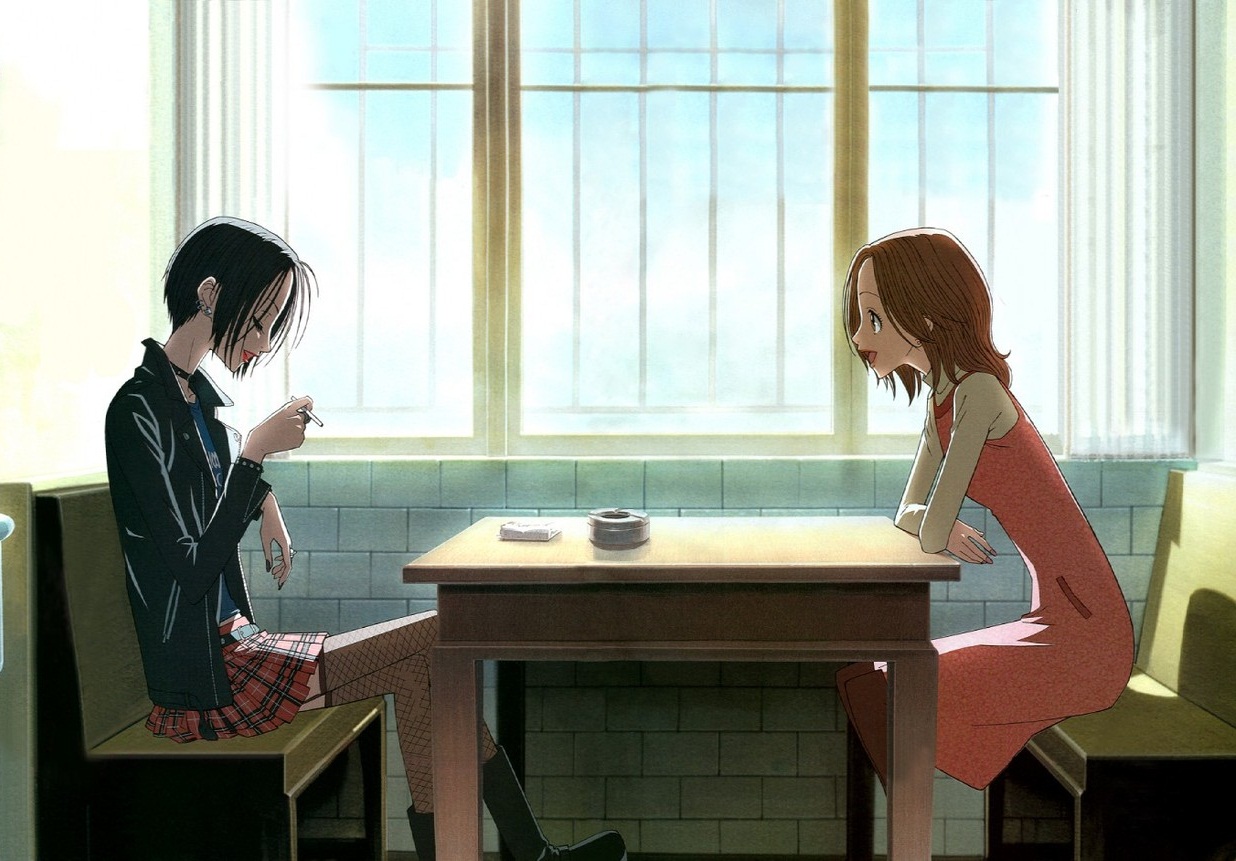 Nana Osaki and Nana Komatsu are the main protagonists and their friendship is also the one that is the most explored throughout the anime.
Nana Osaki is described as a slim girl with short black hair, brown eyes and a beautiful face. She may seem like a tough and merciless goth punk rocker, but she is actually very kind and takes care of people she likes which makes her a very devoted person. She also loves using black humor and sarcasm in order to tease her friends and band mates and she also tends to be very direct, open and honest. Abandoned by her mother, she grew up with her strict grandmother who died of an illness. Nana has always had a rebellious streak and a need to be independent and reach her dreams. However, there are hints throughout the series that these childhood traumas created an inferiority complex and fear of being left alone again.
On the other hand, Nana Komatsu or Hachi is a spoiled girl with auburn hair of middle length who likes wearing feminine things. She is rather cute and kind, but also a bit scatterbrained. Nana Osaki started calling her Hachi after the famous dog Hachiko in Japan, who waited at Shibuya Station for his owner many years after his death, because she reminded her of a cute dependable dog, but also in order for their friends to differentiate one from another. While Nana is trying to make her band Black Stones successful, Hachi is only looking for love.

So how and when do they become close? The moment they met on the train for Tokyo, an obvious and remarkable bond was born between them. After they introduced themselves and realized the incredible coincidence of sharing the same name and age, they slowly opened up and talked comfortably for the rest for the trip. They talked about the place they came from and the reason they decided to go to Tokyo. Nana Osaki was going after her dream of becoming a successful vocalist for a rock band Black Stones. 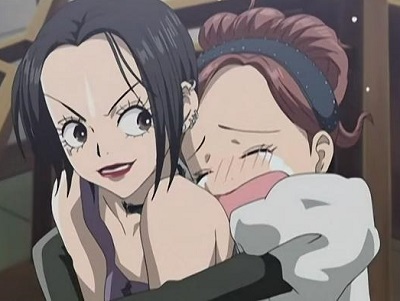 When they arrive in Tokyo, each one goes her separate way until later on they meet again by a twist of fate in the same apartment as flat mates. Hachi goes to her boyfriend's place, who left their hometown in order to work in Tokyo, so she can live with him, but soon decides that she has to become independent, so she ends up sharing a flat with Nana. They become very close after a short period of time - they get a pairing set of glasses and they start sharing their meals together. The way they care for each other can be seen in the episode in which Hachi sees her boyfriend cheating on her and breaks up with him. Nana gets really angry, to the point of wanting to beat up her boyfriend. They spend the whole night in each other's arms embracing each other while Hachi cries her heart out. Hachi is also the one who comes up with the idea of reconciling Nana with her ex boyfriend Ren who is now a popular member of a rock band Trapnest. Nana is also very protective of Hachi and it becomes apparent that she is also jealous when it seems that Hachi is being "taken away" by her boyfriends because they cannot spend as much time together as before. The reason for such behavior is probably because Nana was abandoned by her mother and boyfriend and she is afraid of losing Hachi, who has become a source of joy and positive energy in her life, too. 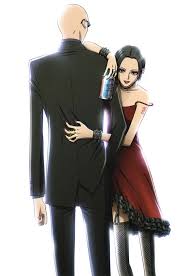 Yasushi Takagi or Yasu is the drummer in Nana's punk band Black Stones. He is described as a bald man with thin eyebrows who always wears sunglasses and has a powerful aura around him. He is a close friend of Nana's boyfriend Ren since they grew up in the same orphanage and became close like brothers.
He got close to Nana after she joined their band in their hometown and even closer after Ren left for Tokyo to join Trapnest. It becomes obvious in the anime that he has feelings for Nana, but he does not want to pursue them because he knows she and Ren have always been and will always be in love.
He looks after her like an older brother and whenever she calls him, he immediately comes to the rescue, which makes him one of the most reliable people in Nana's life.

Nobuo Terashima or Nobu is the guitarist in Nana's band and also her first friend ever. There is a scene in which she tells him that she hated people before meeting him in high school and that she managed to get in touch with punk music thanks to him. Furtermore, she also got to meet Ren thanks to him because he also invited her to be a vocalist for their band. Nobu is a friendly and sensitive person who also befriends Hachi but ends up falling in love with her. It is hinted that even after breaking up with Hachi he has never managed to get over his feelings for her.

Shinichi Okazaki or Shin is the bass player in Black Stones and also the youngest and most mischievous member. He is the last one to join the band in Tokyo, but he quickly becomes friends with everyone. He has a special connection with Hachi because she always cares and worries about him, to the point that he exclaims that he wishes he were her baby, instead of his parents, which is normal considering the fact that he left his family because they rejected him.

All of the characters in Nana are intertwined and related in some way, but the most important message that this anime sends is that despite physical differences and aspirations, we are all human beings who crave for love and acceptance. The level of closeness is not about the clothes you wear or the way you act, but more about mutual understanding and fighting to keep the bond strong no matter what.