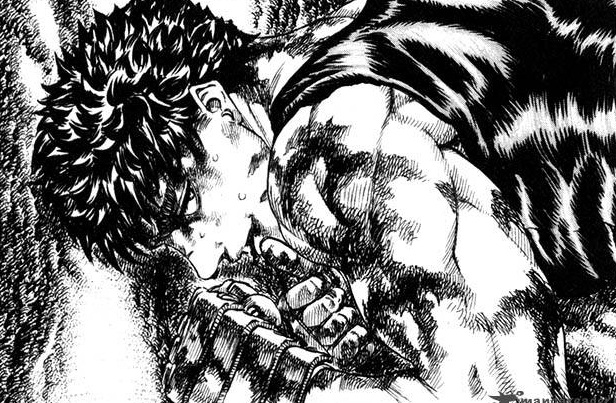 When the Berserk prototype came about, it presented audiences with a dark European style fantasy setting which at that time in Japan was something seen in very few contemporary titles. In fact, aside from a few examples in Japanese literature and a handful of western movies in circulation, Berserk brought something entirely unique to popular Japanese culture of that era. Although Berserk provided something very new, it still respected the old and followed the usual trend of ultra-violent comics which climaxed in Japan during the late 80's to early 90's. The flow of the story emulated the focal shift explored by the recently established "real robot" genre of animation, centering its narrative around the real life repercussions of a turbulent world on the main characters (such as the iconic Mobile Suit Gundam). Even with all its superficial similarities to other anime of that generation, Berserk's 'Golden Age Arc' (when taken as a stand alone story) offers a beautifully detailed social tragedy that documents the decomposition of relationships and the mind in a way that few other anime have ever done. 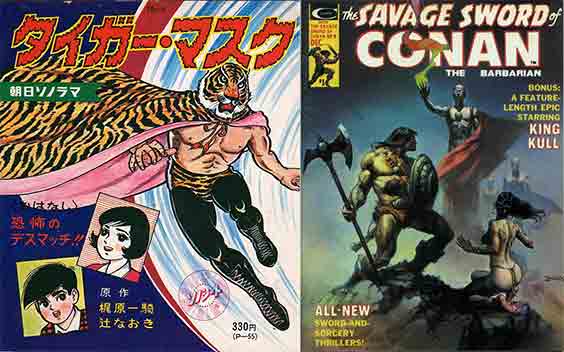 Japanese fiction has never been devoid of sword and sorcery themes. Bunraku puppet theatre, Noh theatre and early picture scrolls dating back to the 11th century all depict sagas of great warriors battling with dragons, daemons and goblins among other supernatural entities. However, it was not until a series of novels written by Kaoru Kurimoto called The Guin Saga saw release in 1979 that a rendition of a western-style fantasy setting was penned by a Japanese author. The Guin Saga revolves around an indomitable character (with the appearance of the legendary Japanese wrestling hero 'Tiger Mask' and the battle skills of Robert E. Howard's 'Conan') overcoming all odds with cunning, skill and the liberal application of brute force. Three years later, the movie Conan The Barbarian starring Arnold Schwarzenegger would further broadcast this idea of a western style fantasy to the Japanese public. 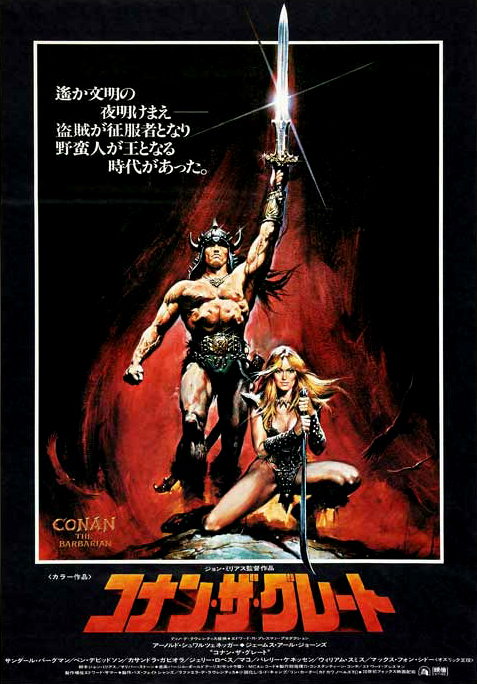 While Conan came close to Berserk's feel, it still lacked the Hans Christian Anderson-esque wattle and daub houses, the 15th century European costumes, weapons and armour that form the set dressing of Berserk. Even closer to the mark was the infinitely awesome, post-apocalyptic, science fiction, fantasy, horror, daemon hunting, vampire slaying saga that constituted the 1983 Vampire Hunter D' novels. It was not however until the 1985 release of Paul Verhoeven's live action epic Flesh and Blood that we see the imagery, world and unique demographic templates that would truly shape the look and feel of Berserk. 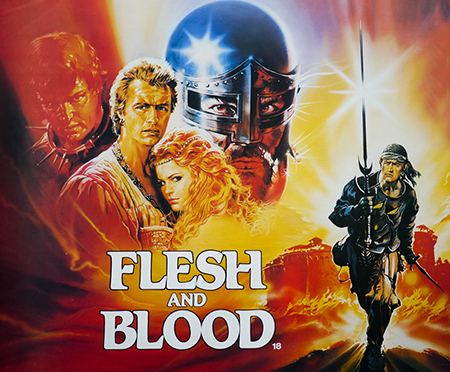 In Flesh and Blood (cited by Kentaro Miura as one of his key influences), Verhoeven vividly evokes the gritty world of war-torn Italy in the 15th century. From small villas and towns to medieval castles with cannons as well as the full spectrum of 15th century and earlier armour variations, you could freeze frame this film and drop it seamlessly into the background of almost any Berserk scene. Flesh and Blood explored the culture of European mercenaries in a way only otherwise seen in the grim 1970 film The Last Valley; both films are uncompromising in their ruthless treatment of characters and portrayal of brutal violence as a means of survival. The same violence courses through Roman Polanski's adaptation of Macbeth, Akira Kurosawa's Ran and a number of ultra-violent anime already in circulation around the time of the 1988 release of the Berserk prototype.

Graphic violence is commonplace in traditional Japanese printmaking and painting. This violence, as in Berserk, often appeared in conjunction with daemons, ghouls, goblins and the feats of great war heroes, but its depiction in mainstream modern media was a phenomena that slowly crept in from China through the Hong Kong comics industry over a 10 year period. In 1970, Wong Yuk-Long began the syndication of Little Rascals (later re-titled Oriental Heroes). 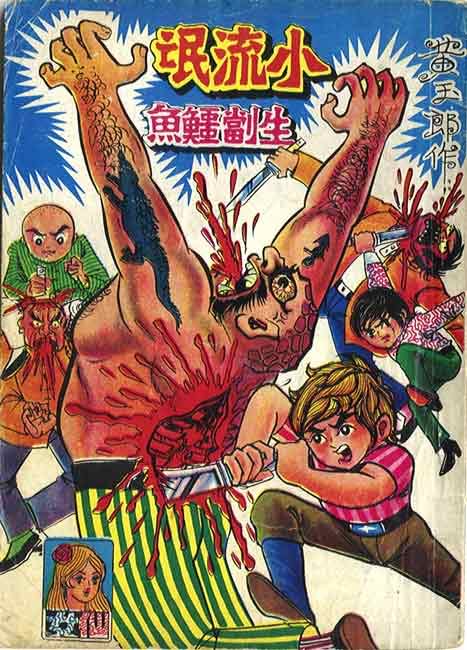 This Manhua (Chinese narrative comic) featured graphic content apparently so violent that the government passed an indecent publication law banning such graphic violence in Manhua. Soon after the law was passed, Wong found loopholes in the system and flood gates opened once more for bemuscled fighting heroes who brutally dismember their enemies, and Manhua had a huge impact on popular culture worldwide. Japanese comics had seen their fair share of graphic violence in Takau Saito's long running classic Golgo 13(1968), but the hallmarks of Manhua's influence can be readily seen in the character design and explosive martial arts violence of Hokuto No Ken(aka Fist of the North Star, 1984) and subsequently in the tall, angular but well-built frame of Berserk's lead character: Guts. 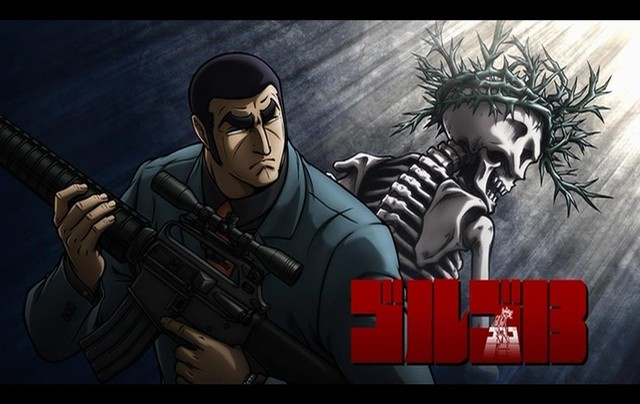 At the time of the Berserk prototype's release, there was blood in the water and all the breakthrough Japanese anime were in full frenzy. Urotsukidōji, the latest installment of Devil Man, Wicked city, Violence Jack and more all lead the charge and their power influenced the emerging young mind of Kentaro Miura. For Miura however, the violence, like the themes of mercenaries castles and knights and demonic monsters, were all just forming an elaborate backdrop for the real story he aimed to tell.

Berserk may draw audiences in with its shocking graphic violence and Solomon Kane style 'cooler than thou' ambiance, but what established its cult following is the real human drama which plays out on that bloody stage. This stands out in Miura's exploration of his characters psychological responses to the brutally dark and sometimes absurd world he realised. This promise was not however new to contemporary anime. Both Mobile Suit Gundam (1979) and Super Dimensional Fortress Macross (1982) explore the idea that, while the technology of war machines may advance exponentially, it is the human operators and citizens being affected by the madness of war whose stories become central to the flow of the ongoing plot.

Berserk is much the same. For all the madness surrounding the main characters of Berserk, it is still their stories, their interactions and their shifting emotional states that define key plot developments in the 25 episode anime series known as The Golden Age Saga. What sets Berserk in the Golden Age Saga aside from the themes in the real robot genre of anime is its darkness. The audience witnesses a broad spectrum of sometimes antagonistic personality types being slowly meshed, even forged together over several years through the focus of a single cause, but there is no "Macross-style" heroic death waiting for them at the end of the series. There is no "Gundam-like" final battle that can be won triumphantly. There is instead a slow, bitter, grinding road to abandonment, mental disintegration and ignoble death.

It's about friendship, yeah really! It's about dynamics in friendship, expectations, fantasy and disillusionment. Many devout fans say the Berserk manga is great and the end of the 25 episode anime is just the beginning of a long saga, a saga that to this day (9/18/2015) remains unfinished. The manga is cool for sure, but I say that the 'Golden Age Saga' is a succinct summary of beautiful and mislaid friendships. It shows how smart people make stupid decisions and how strong people can be so ignorant of love that they will spend an eternity in hell trying to recapture a dream and still fail. Berserk also explores the disintegration and stagnation of the mind in the aftermath of social upheaval. Berserk is a tragedy that should be placed alongside Kurosawa's Dodesukaden, Ghibili's Grave of the Fire Flies and Suehiro Maruo's Midori. I'm not saying it should be held up to such critically acclaimed masterpieces (although there is something to be said for the beautiful line work of the Berserk manga), but it is definitely cast from the same mold and adheres well to many of the classic tropes that define great Japanese tragedy.

Who should watch Berserk? 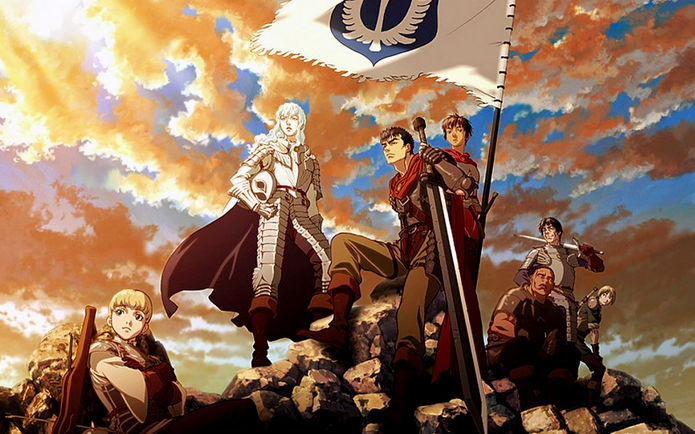 If you're a fan of fantasy, violence, and dark themed anime, Berserk may be just what you were looking for! Go check it out!