I Asked Fans to Make Hachiman's Anime List. Here's What They Created.

A profile full of references, relatable protagonists, and a dash of fetishism.

Yesterday, on a creative whim, I put out a new type of post on our Facebook page that asked followers to consider a simple hypothetical: What if anime characters used MAL? For our trial run, I picked our rank #13 character that many anime fans feel an affinity with: Hachiman Hikigaya. And let's just say it was far more entertaining than I'd expected. 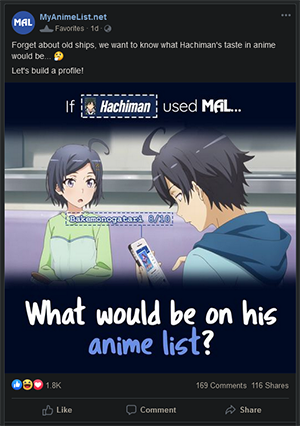 One fan went the extra mile, adding a 3/10 score for Bunny Girl Senpai, Classroom of Elite, and Hyouka with the hypothetical comment, "The main characters remind me myself, but they are ikemen so fk them."

"Anyone who has read the light novels knows that it will be so full of sh*t, the insane amount of references to other franchises is insane." A number of astute fans pointed out some of the most notable:

The number of people who answered this was both concerning and hilarious.

"Because he has 'things' for beautiful looking boys"

And this one came from a single commenter.

As for his own anime, Yahari Ore no Seishun Love Comedy wa Machigatteiru.? There was both "he would never watch it" and "he would give it a 10/10"!

Did they get it right? What do you think would be on Hachiman's anime list?