A Manga for Anyone: Nagabe and the Unique Charm of Totsukuni no Shoujo 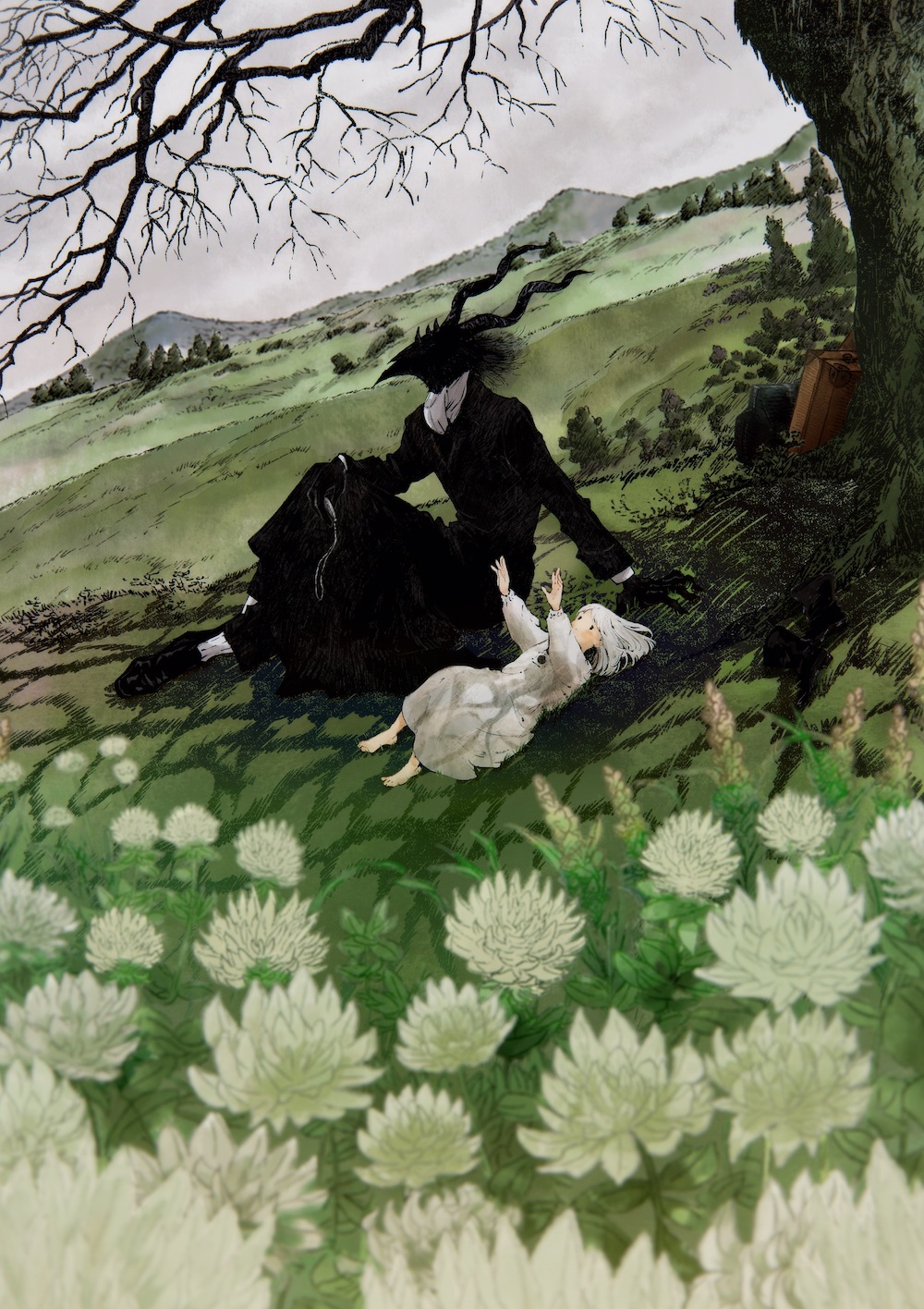 Colored illustration from the manga series, Totsukuni no Shoujo.

Totsukuni no Shoujo—licensed in English as The Girl From the Other Side: Siúil, a Rún—is not your typical manga. This is immediately evident by the distinctive art style: the volume covers evoke a feeling of gothic fairy tales with subdued colors and strong ink strokes. After opening the book, it is clear the artist's care for detail and imagery extends beyond the cover illustrations, and each page draws you in further. But if the art alone isn't enough to capture your interest, the impressive community rating (8.23 as of this article's publishing) should warrant giving Totsukuni no Shoujo a second look.

Serialized in Comic Garden since September 2015, the manga has culminated its run after five and a half years with its final chapter—released today. To mark this achievement, and the announcement of a new feature-length anime by Wit Studio, the manga's creator Nagabe and editor Shinpuku discussed the beginnings and progression of this unique work. 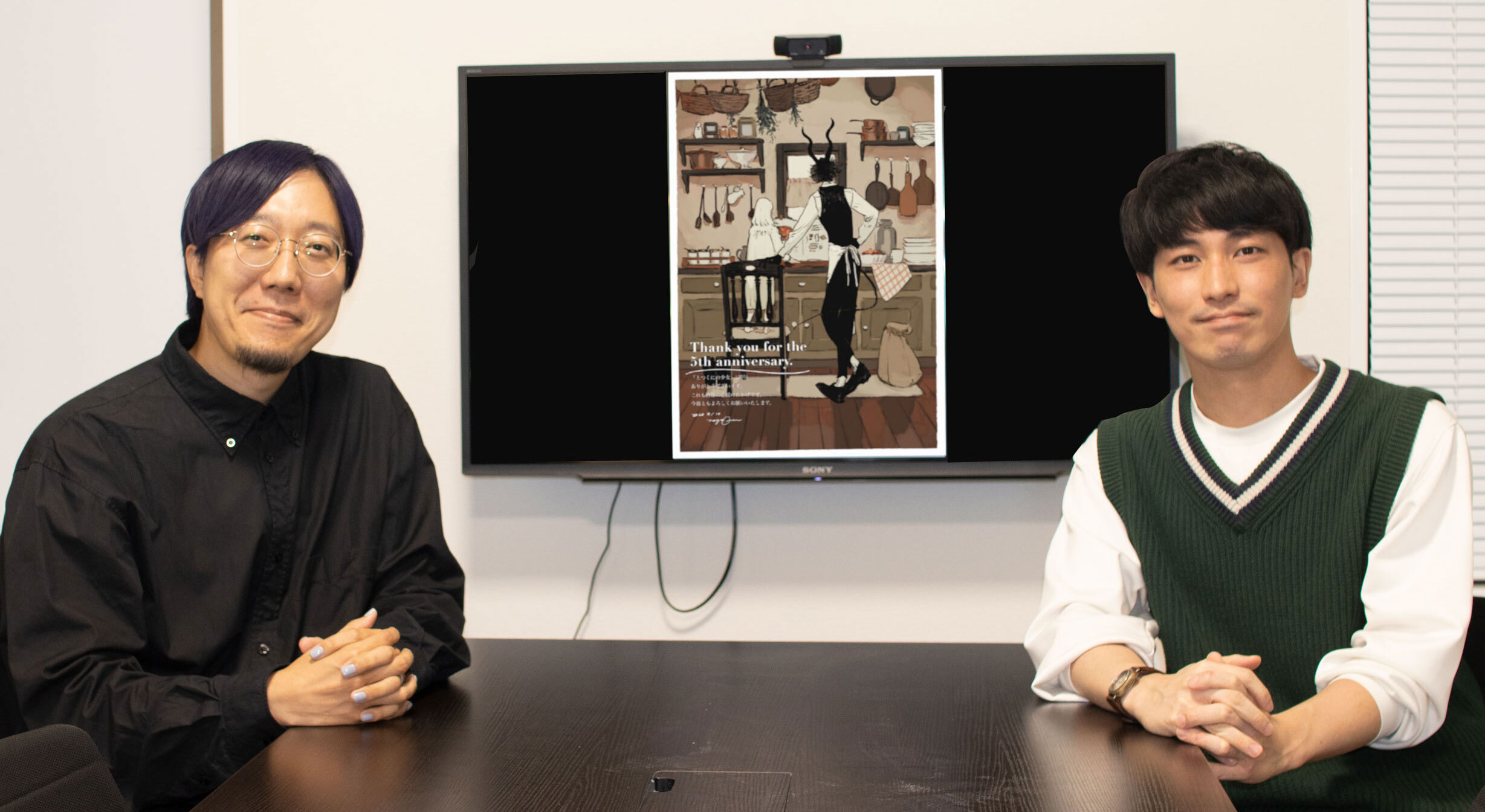 Please share with us how Nagabe-san and Shinpuku-san first connected.

Nagabe: I published a short manga that was the prototype of The Girl from the Other Side on Twitter, and Shinpuku-san found it.

Shinpuku: Had some other publishers already gotten in touch with you at that time?

Nagabe: I received several invitations, but Shinpuku-san was the first to contact me, and the communications were smooth. That was about five years ago now.

Shinpuku: I remember Nagabe-san was a university student at that time. Especially when I spoke to him, he was a "mysterious person" to me (laughs). He was soft and polite in emails, so I thought he was a woman until I actually met him. But people often say that to you, right?

Nagabe: I don't often make public appearances, so when I do, I'm often told that people mistook me for a woman based on their impression of the pictures I draw (laughs).

Do you recall any memorable moments or challenges from that encounter to the release of the manga's first chapter?

Shinpuku: For the first chapter, I asked Nagabe-san to come up with 4 to 5 pattern composition plans from different angles, and from there I created the current style.

Nagabe: At that time, I was still attending college and had to devote time to production while also submitting reports to classes. So I have the impression that the preparation period, which was the first step, was difficult.

Shinpuku: At that time, you also had practical training, didn't you?

Nagabe: That's right. Shinpuku-san contacted me just before practical training began, so I was very busy for the next few weeks. I still have an art teacher's license.

Shinpuku: So you also could have decided to become an art teacher. But at that time, the serialization of The Girl from the Other Side began.

Nagabe: You made the way for me to become a manga artist, and now we are celebrating our 5th anniversary. I'm grateful.

Regarding character design, what kind of things do you pay attention to when drawing non-human beings?

Nagabe: For example, creatures such as cats, dogs, whales, and jellyfish have more distinctive silhouettes than humans, so I think it is important to capture and draw them. The character design of Teacher in The Girl from the Other Side was also first created by the visual of the face and body, and then fitted with the nature and the attitude of the character afterwards. 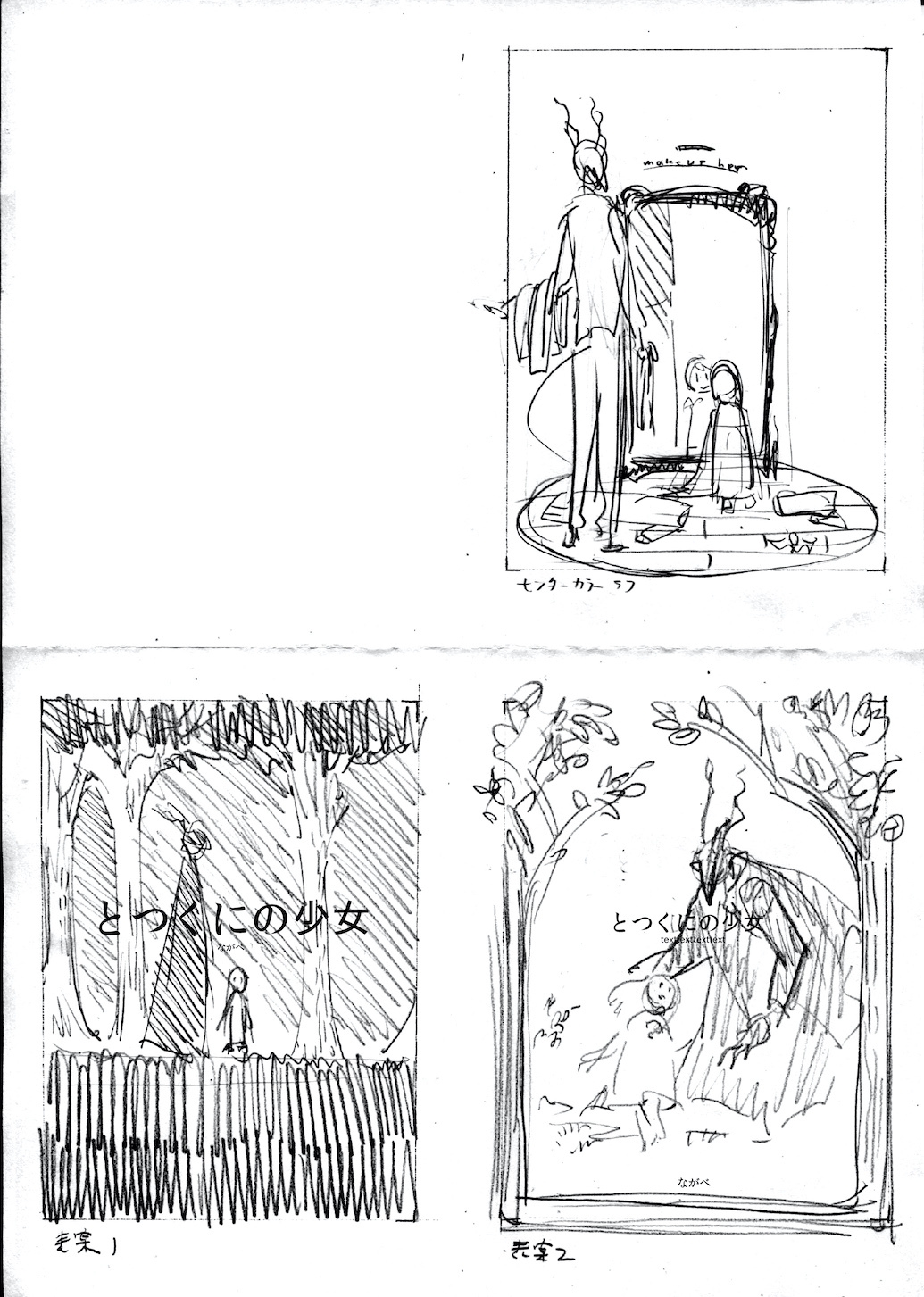 Initial sketches of illustrations for the compiled volumes.

You link the story further from there, right?

Nagabe: Especially during the creation of the first chapter, I discussed with Shinpuku-san about what I wanted to draw in this manga while making the best use of visuals. From there, we agreed that we should focus on ​​the "gentleness" of Teacher and Shiva rather than the plot, and describe the time in the story slowly and carefully.

Shinpuku: I didn’t make any decisions as a general rule, but since the editor in charge is also the first reader, I gave him some advice to better convey the story's appeal to its readers, such as "This information should be given first" and so on.

How did you decide on the cover illustration for the first volume, as well as the binding and design of the manga?

Nagabe: I ended up drawing two patterns for the cover of Volume 1, but the outline of the character drawn in watercolor was blurred, and I couldn't convince myself in the end, not to mention that I couldn’t make it by the deadline....

Shinpuku: That's right. At first, Nagabe-san requested, "I would like to publish the manga in an antique foreign book style, including the texture," and when the draft started to proceed as planned, he asked, "Could you hold it for a moment?" (Laughs). The feeling of the illustration was the same, but the technique was different. Although it may not be noticeable to the readers at first glance, we consulted with various sections that we think it would be better to replace it.

Nagabe: At first glance, the eye-catching elements may be weak, but I didn't want to have a cover like a standard manga. As a result, the style of the current cover cherishes the atmosphere of the work. 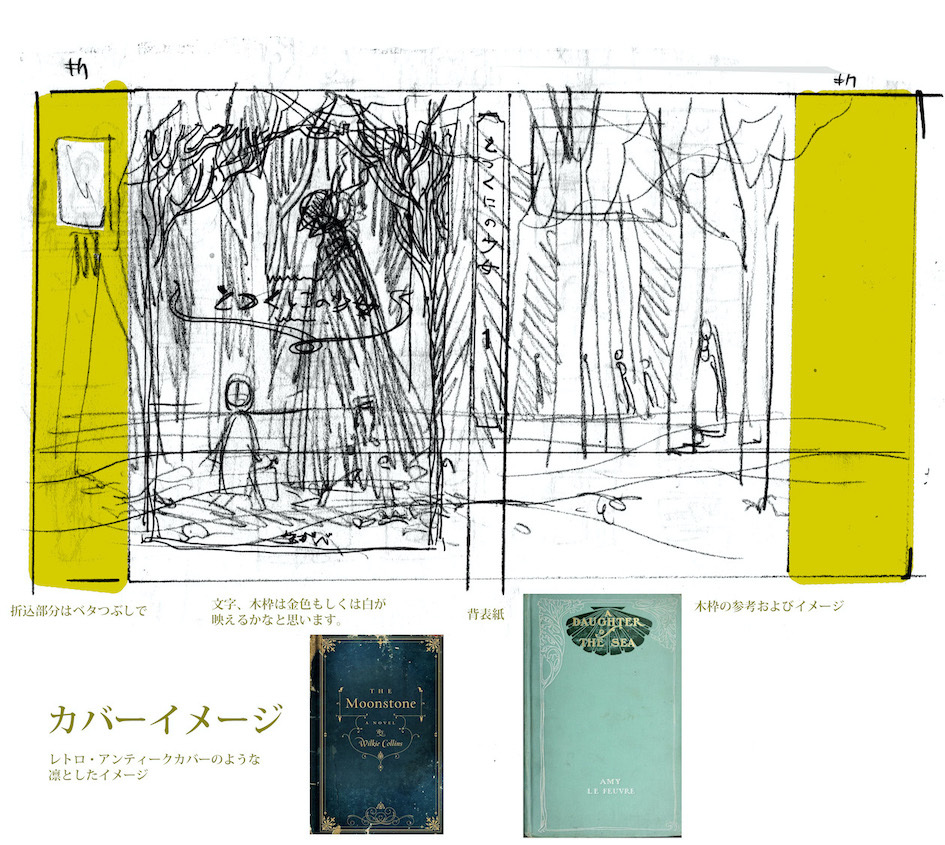 Concept and final draft of the first volume cover.

Have you added any touch-ups to the manga from an editorial point of view, or devised something during sales promotion, to acquire fans of the work?

Shinpuku: Due to the serialization schedule, only one book can be released every six months, so we often talked about "where to divide the story to retain the readers’ interest." Fortunately, I was in charge of another work on the subject of non-human beings, so I conducted a cross promotion involving that. Especially in the case of The Girl from the Other Side, there were some commercial challenges because it was different from the general manga appearance, but we focused on communicating it to our readers sincerely. I think that the recognition of Nagabe-san's ability has led to the current evaluation from the readers.

How was the response from readers after the release of Volume 1?

Nagabe: When it was first lined up on shelves, I actually thought that only the existing readers who liked it would pick it up because it didn't look like a manga. But after it was released, the response was more than I could have imagined and it was read by various readers. For example, we received comments such as "I don't usually read manga, but I read this work." I was able to reaffirm the direction this work should aim for.

Shinpuku: I agree. There was a wide range of feedback and we also had many responses from people from overseas, including those who do not usually read manga. While it wasn't surprising for me, I was happy that the theme of this work was well evaluated. Since this manga is drawn solely by Nagabe-san, I think that may be one reason that it is easy to convey a coherent image.

The first Limited Edition of Volume 8 also came with a short anime produced by Wit Studio. Did you voice any requests during this production?

Nagabe: I didn't request anything. There are anime professionals for anime, and I'm a manga professional. As I'm an amateur when it comes to anime, I thought I would leave that to the professionals.

Shinpuku: Two directors were in charge of the short anime. As a preliminary step, I discussed the basis of the work before leaving creation to them, and they started the production after communicating with each other. Because of this, the anime's image was never different from ours. Rather, I felt, "They like this work so much!" (Laughs)

Nagabe: Especially with regard to visuals, they were able to draw more than I had imagined, and I was able to leave it to them with confidence.

Please tell us your favorite scenes in the anime.

Nagabe: I posted a GIF animation on Twitter, but the scene where Teacher and Shiva are cooking is drawn very naturally and attractively. I watched the clip over and over, while thinking, "I love this scene…"

Shinpuku: That scene is packed with the best elements of The Girl from the Other Side. I like the last sequence of beautiful frames when they begin rowing a boat. Although it is possible to draw a manga illustration in color , I think it is difficult to express and produce every scene of the manga in color. So when I saw the animation, I thought the benefit would being able to express that part.

It was the 5th anniversary of the manga's serialization in September 2020. Do you have any new goals after the anniversary?

Nagabe: Until now, I haven't drawn works that emphasize art style like The Girl from the Other Side does. But thankfully, after having the opportunity to continue this for five years, I've realized that the readers are looking at the drawings more than I expected. I would like to preserve the charm of the art style, while also considering which manga-like elements to add to the work, such as the fun parts of the scenario and developing characters whose emotions the readers can embrace.

Shinpuku: My primary thought is to give Nagabe-san the freedom to draw the work in a healthy manner. Although there is little that the editor can do about the art, I think that I can be of help for the storytelling. What do you think?

Nagabe: Thank you very much. I'm counting on you (laughs).

Shinpuku: While aiming to be such a dependable person (laughs), I would like to be able to deliver the story of The Girl from the Other Side to readers without breaking the current style.

And the final volume will be released on April 9, 2021, correct?

Shinpuku: How many volumes did you expect the manga to have at the beginning of the series?

Nagabe: I was thinking that I would be happy with about 4 to 5 volumes. I never imagined that it would grow to more than twice that number. That is why I want to do my best, and I want to make the most of the time remaining to deliver the charm of The Girl from the Other Side to its readers as much as possible.

Finally, please give a message from Nagabe-san to the readers.

Nagabe: Thank you for reading The Girl from the Other Side. As the story continues to be tough, I think that many of you may be heartbroken now, but I have prepared a final scene that will satisfy everyone. I hope that you will stay with us until the end. Thank you very much.

Interview and text by Kuranosuke Yoshino.
Interview was conducted in Japanese and originally posted on Animatetimes.
The official English translation was provided exclusively to MyAnimeList and has been edited for clarity.