Knights have a few stereotypical characteristics: fighting for a master they have sworn their service to in the name of what they view as right, backed up by a big suit of armor and a massive sword. These soldiers are no normal grunts, they are the one man armies who can make or break the tide of any battle. Some fight for honor, others for survival, and the rest merely for the glory of battle.

Suzaku Kururugi from Code Geass: Lelouch of the Rebellion Originally a Japanese citizen, Suzaku enlisted in the Britannia Empire’s military forces after they conquered his homeland. His hope was to bring peace from within, uniting the world with an olive branch rather than an iron fist. Over time his idealisms do begin to wane as the harsh nature of war reshapes his image of the world. Throughout these ordeals his already notable skills as a warrior increase ultimately making him one of the deadliest, if not the #1 deadliest, fighter in all of Code Geass. While most mages are your classic pointy hat and staff types, Saber (aka Arturia Pendragon) utilizes her magical abilities for physical combat. Having never been trained as a proper mage, she honed these skills into her swordsmanship to become faster and stronger than a normal human being. On top of her sword being strong enough to kill whoever is on the pointy end with one swipe, it can also fire an energy beam that is basically a magical death ray for whatever poor sap gets hit by it.

Daryun from The Heroic Legend of Arslan Known as the Black Knight of Pars, Daryun is about as close as a person could realistically come to being a perfect knight. After the downfall of his kingdom (which he nearly prevented via being a badass), he devoted himself to protecting the crown prince Arslan. Despite a personal yearning to avenge the kingdom, Daryun considers the prince to be his foremost responsibility. And when you are trying to survive on a desperate quest, having a knight who doubles as a one-man army is always a good thing. Ezra is more of an armored wizard than a knight, but she still fits the traditional role well. Do not let her petite figure fool you; Erza’s battle prowess is a deadly mix of strength, speed, intellect, and magic. Her primary ability is even called The Knight and gives her to power to summon whatever swords and armor are best equipped for her current situation. Erza also possesses a strong sense of right and wrong and prides herself on working alongside her fellow guild members.

Saito Hiraga from The Familiar of Zero Saito was once a normal young man on Earth, until a magic spell cast by a witch brought him to another world where he was told to fight as her champion. This did come with a perk: the magical ability to pick and up expertly use any weapon. Preferably he sticks with his talking magical sword and has enough skill to defeat even an entire enemy army single-handedly. He is also kind of a womanizer, which tends to get him into trouble with various ladies.

Nagate Tanikaze from Knights of Sidonia When massive monsters called the Gauna attacked the Earth to devour the population, humanity was forced to take to the stars for safety. As the rules of anime state that the only thing that can kill a giant monster is another giant monster or a big robot, humanity was quick to develop mecha as a defense. Only the best of the best are deemed worthy to be pilots - and then there is Nagate; a seemingly nobody who possesses the greatest skill of them all. Rushing into battle in times where others would flee in fear, Nagate may just be humanity’s best hope to keep surviving.

Ikki Kurogane from Chivalry of a Failed Knight 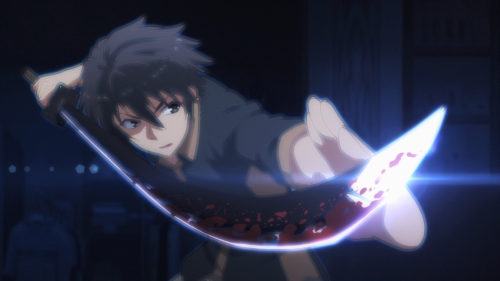 Ikki holds the title of “the worst one” at a magical academy for knights. The stronger your magic, the better a knight you are. Ikki’s issue is that he has no magic. Despite this apparent handicap, Ikki is otherwise unrivaled in terms of combat capabilities. After little more than a moment’s analysis of an opponent, Ikki can overcome any other combat style and win a battle in short order. His battle fury is matched by the kindness in his heart as he is always willing to rise to any challenge to help his friends. The Skull Knight’s identity is shrouded in mystery, but most people (and monsters) who see him worry less about who he is and more about “am I about to die?” Despite his fearsome appearance, Skull Knight has gone out of his way to save Guts and his companions from an otherwise certain doom on more than one occasion, proving himself as a valued ally where others would judge him as an enemy due to his appearance.

Flynn Scifo from Tales of Vesperia: The First Strike Before the events of the Tales of Vesperia video game, Flynn was an apprentice knight of the Niren Corps alongside his best friend Yuri Lowell. Having grown up in the slums, the duo wanted to contribute to society and became knights. Flynn serves as the by-the-books member of the pair, always the first to protect his comrades and fighting with honor. While this is a noble pursuit, leading a life that is black and white does begin to trouble him as Yuri begins to fall into shades of gray. Second-in-command of the Royal Knights, Omnimon is one of the most powerful Digimon in the franchise. There have been several Omnimon across the multiverse of the franchise and they have all been great heroes of their ages. Omnimon is a fusion of WarGreymon and MetalGarurumon. After the duo was unable to defeat the evil Diablomon, they fused to battle him again after he made over 1 million clones of himself. And they won in less than 10 minutes. Other Omnimon have often given their power to various protagonists, ensuring that even in their absence the digital and human worlds remain protected.

Parn from Record of Lodoss War Parn began life as a humble man living in a small mountain village. Scorned by his father’s past as a dishonored knight, he leaves his home seeking adventure as a free knight who fights for justice rather than a kingdom. Now leading a group of somewhat dysfunctional companions, his group travels the land helping everyone from kings to peasants as he seeks the truth of his father’s mysterious past. Yotaro is the last survivor of the Knights of the World, an order who strove to uphold a world of honor and justice. Unsure he has what it takes to live up to these ideals, Yotaro seeks to live a civilian life instead of that of a knight. But he cannot forget his honor so easily and is quick to rush to the aid of those in need, wearing a mask to hide the civilian identity he wishes to preserve.